1) News broke over the weekend related to the U.S. government taking a harder look at the tech giants, Amazon (AMZN), Facebook (FB), Alphabet (GOOGL), and Apple (AAPL). I continue to recommend the stocks of the first three, favoring Alphabet over Apple for reasons I outlined in my May 1 e-mail.

But all shareholders need to carefully follow these investigations (and similar ones happening all over the world) and consider their implications. For now, I believe they are unlikely to derail the dominance of these companies, but I’m open to changing my mind if the facts change.

Personally, I think they should all be broken up, which would be good for society – and for shareholders. But barring a President Elizabeth Warren, this is extremely unlikely to happen…

2) Today’s Stock Idea of the Day is ad firm Criteo (CRTO), which is around $18 a share and is trading near its all-time low in the five-and-a-half years it’s been public. It was recently written up on Value Investor’s Club. (For those of you who are members, click here; for those who aren’t, here are links to the 2016 long and 2017 short posts.)

For the many readers who are new to this list, my Stock Idea of the Day is not a recommendation – just something I’ve found that I think is interesting enough to be worth further investigation…

If you’re anything like me, when you hear “online ads,” you immediately think of tech behemoths Google, Facebook, and Amazon. So I was surprised to learn that this obscure company was a major player in this industry.

Criteo launched in France in 2005 and has grown into a global company with 2,700 employees in 31 offices serving nearly 20,000 clients. The company analyzes more than $800 billion of online sales transactions and serves more than 1 trillion online ads annually. 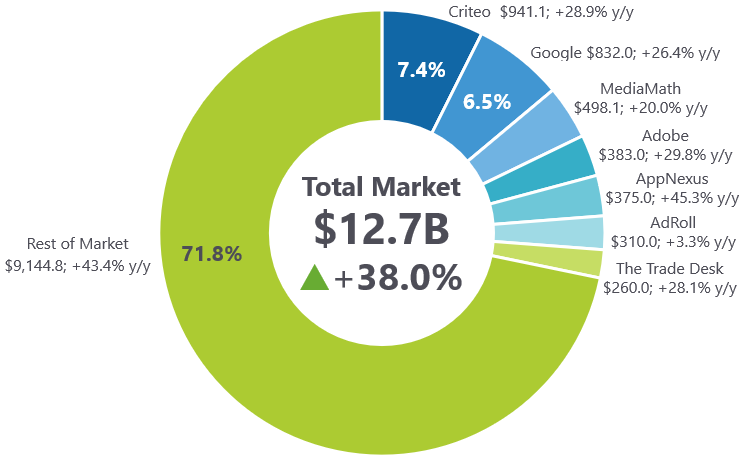 Criteo’s business is in retargeting ads. Let me explain what that means…

Every day, millions of people browse many e-commerce sites. Some know exactly what they want and complete their purchases, while others don’t and are essentially “window shopping.”

Yet another group is undecided. They know what they’re looking for but haven’t committed. These shoppers might have several shopping carts with the same or similar products for later consideration. You can imagine how online retailers want them to follow through with a purchase. Criteo helps them by retargeting personalized ads toward these high-intent shoppers.

The company’s software is embedded in thousands of retailers’ websites. Each time someone visits a site, Criteo gathers small pieces of information and weaves them into an online profile that it can then use to target ads.

It’s important to note that Criteo doesn’t gather sensitive information, such as names or home addresses. Instead, it relies on analyzing data from more than 1.5 billion users to learn when and where to show the most appropriate ads.

Criteo boasts a 90% customer retention rate, which it claims is a result of its system beating the competition 90% of the time in head-to-head tests. Supporting this claim is that 73% of the company’s revenues come from uncapped budgets. In other words, its customers entrust Criteo to deploy ad dollars on their behalf – a sure sign of how valuable its service is.

The stock went public in October 2013 and, as you can see in this chart, it’s now close to an all-time low despite trailing 12-month operating income rising sixfold: 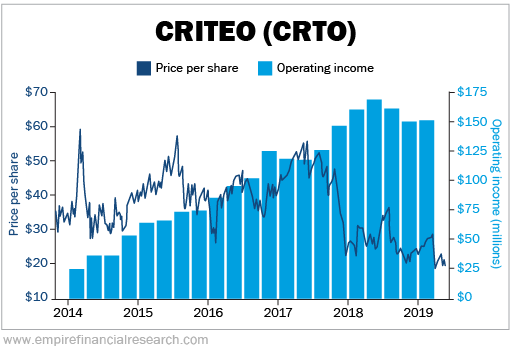 What explains the stock’s weakness? It started in June 2017, when Apple rolled out its Intelligent Tracking Prevention (“ITP”) policy. This effectively made it impossible for Criteo and other ad tech companies to track Safari users across different websites.

The stock took another dive in March after this Adweek article, Google Mulls Third-Party Ad-Targeting Restrictions, which speculated that Google would implement its own ITP into its market-leading Chrome browser.

The author of the VIC write-up argues that Google will not deploy ITP on its browser because it would be hurting its own ad business in the process. What’s more, he thinks the company can return to a moderate rate of growth.

If he’s right, there could be substantial upside, as the stock is trading at low trailing multiples of 0.5 times EV/revenue, 4.6 times EV/EBITDA, and 14 times P/E.

3) Following up on last Thursday’s e-mail about Scott Galloway… If you don’t have time to read his new book that I enjoyed so much, The Algebra of Happiness: Notes on the Pursuit of Success, Love, and Meaning, here are two interviews he did recently on YouTube and a podcast (I recommend listening to both at double speed).