On the Post-Pandemic Horizon, Could That Be... a Boom?; Pandemic news is astoundingly good; I saw signs of an economic boom this weekend

1) Yes, stocks in many sectors are frothy, and yes, valuations across the board are high… but I think we’re still six to 12 months away from a market top.

The fiscal and monetary stimulus is unprecedented, and as this article in the New York Times highlights, we could have the mother of all economic booms in the next year: On the Post-Pandemic Horizon, Could That Be… a Boom? Excerpt:

The U.S. economy remains mired in a pandemic winter of shuttered storefronts, high unemployment and sluggish job growth. But on Wall Street and in Washington, attention is shifting to an intriguing if indistinct prospect: a post-COVID boom.

Forecasters have always expected the pandemic to be followed by a period of strong growth as businesses reopen and Americans resume their normal activities. But in recent weeks, economists have begun to talk of something stronger: a supercharged rebound that brings down unemployment, drives up wages and may foster years of stronger growth.

There are hints that the economy has turned a corner: Retail sales jumped last month as the latest round of government aid began showing up in consumers’ bank accounts. New unemployment claims have declined from early January, though they remain high. Measures of business investment have picked up, a sign of confidence from corporate leaders.

Economists surveyed by the Federal Reserve Bank of Philadelphia this month predicted that U.S. output will increase 4.5% this year, which would make it the best year since 1999. Some expect an even stronger bounce: Economists at Goldman Sachs forecast that the economy will grow 6.8% this year and that the unemployment rate will drop to 4.1% by December, a level that took eight years to achieve after the last recession…

Stories like his are behind one of the most intriguing possibilities for the post-COVID-19 era: a surge in productivity. Companies and workers have been forced to embrace a wide range of technologies and policies – online meetings, file sharing, flexible work schedules – that could make their operations more efficient. Spread across the whole economy, such changes could allow faster growth that is sustainable over decades, not just a short-term burst.

Constance L. Hunter, chief economist at the accounting firm KPMG, likened the possibility to the period after World War II. The war led to the development of new technologies and spread existing ones to factories across the country. Those advancements helped make the postwar period one of the best on record for productivity growth, and for economic growth in general.

2) Another reason to remain bullish is that the news on the pandemic has gone from excellent to astounding!

Vaccinations continue to ramp up, the new Johnson & Johnson (JNJ) single-dose vaccine will likely be approved by the end of the month – bringing massive new supply online – and as you can see from the charts below (source), cases, hospitalizations, and average daily deaths are plunging – they’re now down 74%, 58%, and 43%, respectively, from their peaks only five weeks ago: 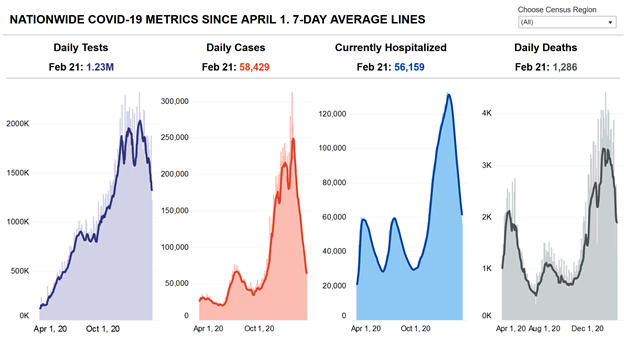 (I continue to closely follow the pandemic, sending in-depth e-mails to my coronavirus e-mail list roughly once a week. If you’d like to receive them, simply send a blank e-mail to: [email protected].)

3) It’s just an anecdote, but I sure saw signs of a budding economic boom this weekend…

My wife and I flew to Salt Lake City on Saturday for a week of skiing at Deer Valley, which just got more than three feet of snow last week (nearby Snowbird and Alta, which we plan to hit later this week, got double that!). Here’s a picture of us: 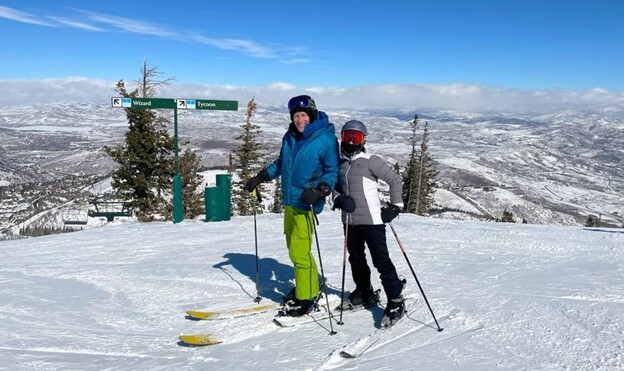 The hotels, ski areas, restaurants, and bars here are all packed. And even the beleaguered airline sector was showing some signs of life. The previous times I’ve flown into or out of one of the New York City airports during the pandemic, they’ve been ghost towns… but the JetBlue (JBLU) terminal at JFK was moderately busy – I’d guess at roughly half of normal levels – as you can see from these pictures: 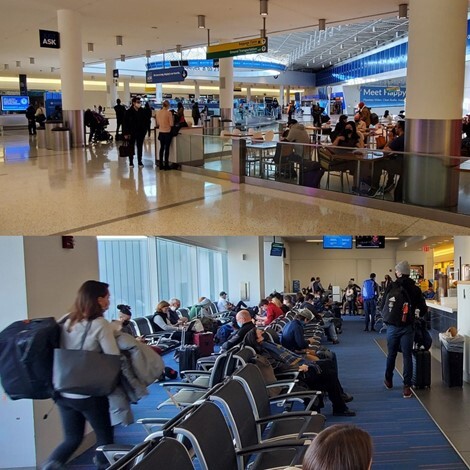 Similarly, our flight was about half-full (and our friend, who flew in from Charlotte, said her American Airlines (AAL) flight had only three empty seats):

My wife took this cool picture as we were landing: 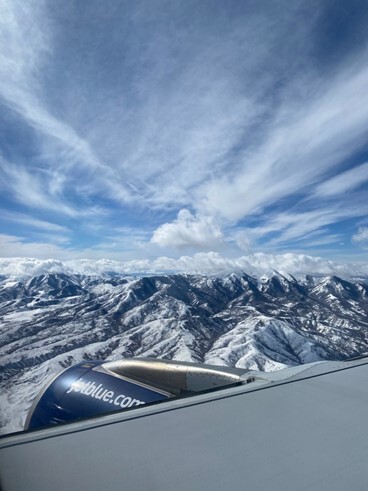 When we arrived at the brand-new, massively larger Salt Lake City airport, it was apparent that we weren’t the only folks looking to take advantage of the huge dump of fresh powder over the past week – it was a madhouse, as you can see in these pictures: 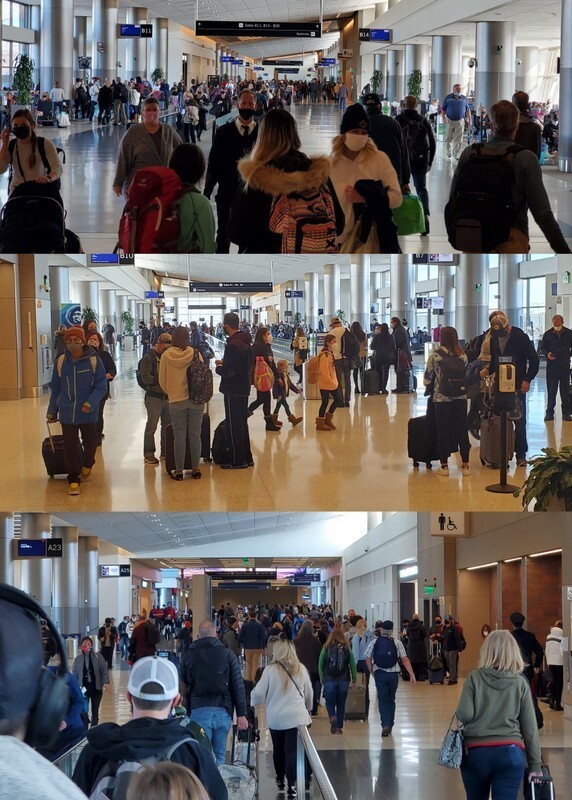 As for airfares, a few weeks ago, airlines were almost giving flights away. The round-trip nonstop cost a mere $251. And a round-trip nonstop from New York to Jackson, Wyoming, at the end of March was $300. But today, the same flights are back to their usual level of $418 and $720, respectively. (By the way, here are tips for finding cheap airfares: Why There’s No Cheapest Day to Buy Flights.)

In summary, we may be seeing the start of a resurgence in travel, which is a leading indicator of an economic boom. This chart shows the seven-day average of the number of travelers each day going through TSA checkpoints in all U.S. airports. As you can see, the first weeks of this year were very weak, but there appears to be a rebound underway… 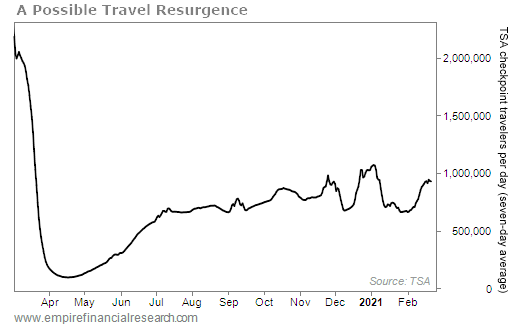 Early in the global pandemic, travel experts rushed to determine the shape of the recovery. Would it be L-shaped? More like a W? A year later, despite brief upticks and plenty of pent-up demand, the travel rebound has yet to arrive.

Yet there are glimmers of optimism, both for the industry and for people itching to dust off their suitcases. Travelers are starting to book now for trips they hope to take months or more down the line. A smattering of markets, including Africa and Antarctica, are doing well, their highest-end inventory already selling out for stretches of their upcoming high seasons (in austral winter and summer, respectively). Some spots are even thriving right now.