1) The latest issue of my colleague Enrique Abeyta's Empire SPAC Investor newsletter will be published today...

Beneath the surface, one of the world's oldest and most steady industries is shaking off its historic underperformance and becoming a dynamic, growing, and – most important – profitable business.

And this month in Empire SPAC Investor, Enrique and his team have a found a disruptor in this 8,000-year-old industry that isn't just well-positioned to take advantage of the changes taking place... it's driving them.

If you aren't already a subscriber, click here to find out how to gain risk-free access to this brand-new issue when it publishes after the market close today.

2) I've received a lot of nice feedback from yesterday's e-mail with my financial advice to retired readers. For example, Mark D. wrote:

You never seem to surprise me with your generosity, empathy, and kindness for your fellow human beings. Your newsletter today on "Financial Advice to Retired Readers" scratched an itch of mine. The information truly has value and can be used by most people.

Although I am not retired, I am 59 years old, have a Navy pension, at 62 will have a government civil servant pension, and at 70 will take Social Security, so that will amount to approximately $8,000 monthly.

So with $1.5 million in investment accounts, $300,000 in annuities, and very low debt (a mortgage), I am using the Empire Financial Research products to build and sustain a modest-risk-aversion approach to investing. Some index holdings, 12-18 stocks, and some quality bond material should get us where we need to be financially.

I am a Lifetime Partner and enjoy all of the newsletters. The addition of Berna is exciting and noteworthy. I cannot wait for Herb Greenberg's newsletter, as I've always enjoyed him on CNBC. And Enrique is the BEST!

I enjoy your daily e-mails and hearing about all of your adventures. Your integrity and character really make the foundation of the Empire Financial Research products. Thanks for all that [you] do...

3) I wish all of our subscribers were as happy and kind as Mark. But with more than 137,000 daily readers and my willingness to wade into controversial topics and take strong positions, you won't be surprised to hear that I get plenty of flak as well. Here's a recent doozy from another reader, who wrote:

Well Tilson, Maybe I shouldn't have joined your stock research offer, because you sound like an out of touch liberal who knows nothing of TRUTH of what is going on in this country.

Your prediction that there would be a blue wave that would win the White House is totally FALSE. THEY DIDN'T WIN! THE ELECTION WAS STOLEN. And if you believe that that isn't true, then you ARE OUT TO LUNCH! You haven't a clue as to what is going on in our sick, sick world. I could fill up your email list with TONS OF ARTICLES PROOVING VOTER FRAUD ALL ACROSS THE COUNTRY!

I get 600 emails a day that absolutely wear me out in keeping up with TRUTH! I get a dozen or more conservative papers that tell the truth of the carnage of civil rights and trampling the Constitution. When you ignore truth, you put your soul in a very dangerous place. When the anti-Christ fools "even the elect," you will be right there with them, because of lack of discernment. If you can't see truth now, you won't see it later down the road either.

I'm rethinking joining your team. I NEVER want to be on the side of the Devil and I think your stand on the vaccines, the election and God knows what else, you know NOTHING.

Bill Gates said at a conference concerning climate change in 2010 gave 3 ways to decrease the population. What was at the top of the list?

VACCINES! Who is behind the vaccines? Bill Gates. I have email after email of people dying from these vaccines for COVID! The spike proteins slow the blood going through the body and every booster causes more sticky proteins to disallow the blood to flow freely. One doctor has predicted that those who have gotten the vaccines will be dead in 3 years!

Enjoy your time here on earth, because your here after will not be so enjoyable!

New subscriber who may not stay.

I have a few thoughts on this...

First, I guess I can only chuckle that I can trigger such polar opposite reactions in people. I'm neither a saint nor the devil – but I try really hard to be more of the former than the latter.

I also have to shake my head in sadness to see what's happened to this reader. I trust that even my readers who question the results of the election and/or the vaccines can see that she has gone off the deep end in a very unhealthy way, no doubt due to some combination of the "600 [e-mails] a day" she receives plus, I suspect, YouTube, Facebook (FB), Twitter (TWTR), the websites she visits, the radio she listens to, and/or the TV she watches.

This makes me worry about the future of our country because I do not think she is an isolated case. For instance, somewhere between 4% and 15% of Americans believe in the truly crazy QAnon conspiracy theory. And who among us doesn't have a friend or family member like this reader? (In a future e-mail, I'll share some thoughts about what you can do to reduce the chances that you'll go down rabbit holes that can turn your brain to mush. I also suggest reading this story: He's a former QAnon believer. He doesn't want to tell his story, but thinks it might help.)

There have always been conspiracy theories and misinformation, but the rise of the Internet and social media has turbocharged it to an extreme degree.

It wasn't so long ago that all of us got our information from a local newspaper, maybe a national newspaper or magazine, and the network news. So even though we had spirited disagreements, at least we all started with roughly the same basic facts.

With hyper-partisan sources of information on both sides of the political spectrum, it appears that everyone is now entitled not only to their own opinions, but also to their own facts.

More and more, we can all now retreat into our comfortable silos, hearing only what reinforces our existing beliefs, and therefore hardening them.

Taken to an extreme, the result is this reader – and tens of millions like her.

This is a big problem that is shaking the very foundations of our country. Worse yet, it's getting bigger every year, and I don't see any easy or obvious solutions...

4) There are plenty of investing lessons here. Every day I see investors making terrible mental or emotional mistakes like falling in love with a stock, relying on faulty information, blocking out disconfirming arguments, and so forth.

For more than two decades I've studied and written extensively about this topic (that academics call "behavioral finance"), which I will share in future e-mails. 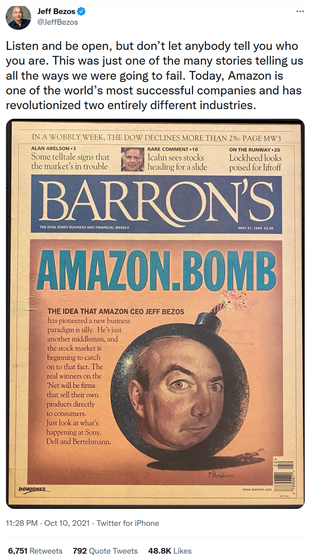 I'm sure it was one of the most widely read Barron's articles that year (subscribers can read it here) – but of course, it couldn't have been more wrong (Amazon's stock is up more than 50 times since then).

There's an important lesson here for investors as well (slightly tweaking what Bezos wrote): "Listen and be open, but don't let anybody tell you what to think." In other words, you must think and act independently.

As legendary investor Benjamin Graham wrote in his classic, The Intelligent Investor, "The stock investor is neither right or wrong because others agreed or disagreed with him; he is right because his facts and analysis are right."

6) Tesla (TSLA) and SpaceX CEO Elon Musk had a little fun with Bezos' tweet, responding by trolling him with an image of a silver medal with a "2" on it, reflecting the fact that he recently once again passed Bezos as the world's richest man:

Here's an article about it from yesterday's Wall Street Journal: Elon Musk Is the World's Richest Person. He Likes to Brag to Jeff Bezos About It, Too.

7) Musk could also have been reminding Bezos that his SpaceX is far ahead of Bezos' Blue Origin, as this recent Financial Times article notes: SpaceX: how Elon Musk's new rocket could transform the space race. Excerpt:

With the power to carry as much as 100 tons into low orbit around the Earth, his admirers claim Musk is about to transform the economics of the launch business.

"It's game over for the existing launch companies," says Peter Diamandis, a U.S. space entrepreneur. "There's no vehicle out there on the drawing board that could compete"...

"If you're not careful, SpaceX will be the only game in town," says Fatih Ozmen, co-founder of Sierra Nevada, a private U.S. company that has been contracted by Nasa to fly cargo to the International Space Station. Blue Origin, Jeff Bezos' private space company, makes a blunter claim: SpaceX could end up with "monopolistic control" of U.S. deep space exploration.

Musk's venture has put itself in a commanding position in the new commercial space industry with surprising speed. It is only 13 years since it became the first private company to launch its own rocket into orbit, breaking into an industry previously dominated by nation states. It has also leapt ahead of contractors such as Boeing and Lockheed Martin, whose joint venture, United Launch Alliance, had carried the flag for U.S. space launch – though using Russian engines.

SpaceX's ascendancy has been underlined over the past six months by a striking series of wins.