Nikola's lame response to Hindenburg Research; Nikola's History of Discrepancies Has Been in Plain Sight; Wirecard and me: Dan McCrum on exposing a criminal enterprise; My test drive of the Polestar 2

The company responded this morning with a press release entitled, Nikola Sets the Record Straight on False and Misleading Short Seller Report, which I read with interest.

So does it set the record straight? Well, only if admitting the key elements of Hindenburg's report qualifies.

The most damning charge in Hindenburg's report is the following:

We reveal how, in the face of growing skepticism over the functionality of its truck, Nikola staged a video called "Nikola One in Motion" which showed the semi-truck cruising on a road at a high rate of speed. Our investigation of the site and text messages from a former employee reveal that the video was an elaborate ruse – Nikola had the truck towed to the top of a hill on a remote stretch of road and simply filmed it rolling down the hill...

Nikola confirmed that it would be a "functioning" and "fully built truck at event" [but] it was not a real truck and was, in fact, a pusher.

In response, the company says it wasn't a pusher – but then admits that the truck shown in its "Big Nikola One Reveal" could not "drive on its own propulsion":

Here are the facts:

As Nikola pivoted to the next generation of trucks, it ultimately decided not to invest additional resources into completing the process to make the Nikola One drive on its own propulsion. After pivoting, Nikola produced prototypes for the Nikola Two, which are self-propelled and have been frequently demonstrated, beginning with demonstration runs at Nikola World in April 2019.

The Nikola One was an incredibly successful proof of concept, and everything the Company learned from that experience has underpinned the successful development of its next generation of trucks that can be seen driven here.

To summarize, as one of my friends e-mailed me:

Basically, Nikola admits that the product was fake. It says that if it had only wanted to, some day, the product wouldn't have been fake.

But at the time of the statement/demo, it *was* fake. Capisce?

Or, as one person posted on Twitter: "I could have kissed her, dude, I swear. I just didn't WANT to."

Another Hindenburg charge is that:

Trevor claims Nikola designs all key components in house, but they appear to simply be buying or licensing them from third-parties. One example: we found that Nikola actually buys inverters from a company called Cascadia. In a video showing off its "in-house" inverters, Nikola concealed the Cascadia label with a piece of masking tape.

In response, Nikola admits this as well:

At no time did Nikola state that the inverter on the prototype truck shown in the video was the Company's or would be used in production. Nikola has been designing, engineering and working on its own inverters for quite some time. The Company does use third-party parts in prototype vehicles, some of which may be subsequently swapped out for its own parts in production. This is common practice among vehicle manufacturers and Nikola often blocks supplier names from the view of media and competitors. Every program is different as they require different specifications and validation.

Lastly, after each of its 11 bullet points, the company repeats this sentence:

These allegations by the short seller are false and misleading, and designed to manipulate the market to profit from a manufactured decline in Nikola's stock price.

It's weird – almost Orwellian – as if repetition will make it true. It reminds me of the famous scene in Star Wars: "These aren't the droids you're looking for..."

In summary, Nikola's response gets a failing grade from me. It doesn't address many of Hindenburg's key claims – and what it does respond to, it admits guilt in a number of areas.

2) When evaluating battles like this between companies and short-sellers, investors should generally ignore what Wall Street "analysts" have to say, as they will almost always toe the company line. Investors should, however, closely follow what top journalists come up with.

Good examples are 60 Minutes – I was featured in two segments in December 2008 about the housing crisis, which won an Emmy, and in March 2015 about Lumber Liquidators (LL) – and my friend Herb Greenberg, whom I first discovered when he was writing about the internet bubble for the San Francisco Chronicle in the late 1990s.

On this front, things are looking bad for Nikola, based on this well-done Bloomberg article: Nikola's History of Discrepancies Has Been in Plain Sight. Excerpt:

Nikola Corp. has left a trail of inconsistent statements and contradictory announcements that are now coming under scrutiny from short sellers eager to poke holes in the electric-vehicle company's success story...

It doesn't take a hedge fund or a private eye to determine that Nikola, which struck a partnership this week with General Motors Co., has a pattern of discrepancies. A look at some of its announcements and filings, along with statements and tweets by Executive Chairman Trevor Milton and other management over the past few years, yields other examples that weren't part of Hindenburg's report.

3) Here's another example of a courageous journalist, Dan McCrum of the Financial Times, who was instrumental in exposing the fraud at German payments-processor Wirecard (WDI.DE)...

In this article, he shares the details of his multiyear experience for the first time – it's an incredible story! Wirecard and me: Dan McCrum on exposing a criminal enterprise. Excerpt:

The charge of criminality from Commerzbank – the idea that I, as a reporter, was somehow in league with speculators trying to damage a company by sending the share price crashing, and that the FT was OK with that – did not come as a complete shock. For many years, Wirecard executives, along with its band of corporate cheerleaders, had routinely dismissed critics as "criminal short-sellers" who would profit if the company's share price fell.

I'd investigated Wirecard since 2014, following a tip that something was awry with the accounts. Together with the FT′s investigations team editor Paul Murphy and in-house libel lawyer Nigel Hanson, we had learnt what to expect from scrutinizing the company: furious online abuse, hacking, electronic eavesdropping, physical surveillance and some of London's most expensive lawyers.

But in the end, it all came crashing down. A couple of years after the Twitter bots attacked me, Wirecard is a smoldering wreck. The ex-chief executive, Markus Braun, is in jail, awaiting trial along with other colleagues, while the company's former chief operating officer, Jan Marsalek, is on the run. This is the tale of what it was like to unravel and expose the reality of a criminal enterprise that relied on a network of professional enablers to keep in motion one of the biggest corporate frauds of the modern era.

4) In my July 27 e-mail, I wrote about visiting the "pop up" showroom for the two new cars by Polestar, a new automotive brand jointly owned by Volvo and its Chinese parent company Geely.

On Thursday, I test drove the Polestar 2 and sent this report to my Tesla (TSLA) e-mail list (if you wish to be added to it, simply send a blank e-mail to: [email protected]):

I test drove the new Polestar earlier this afternoon (see my Facebook page here for my thoughts and pictures from my prior visit to the showroom). Here's a picture: 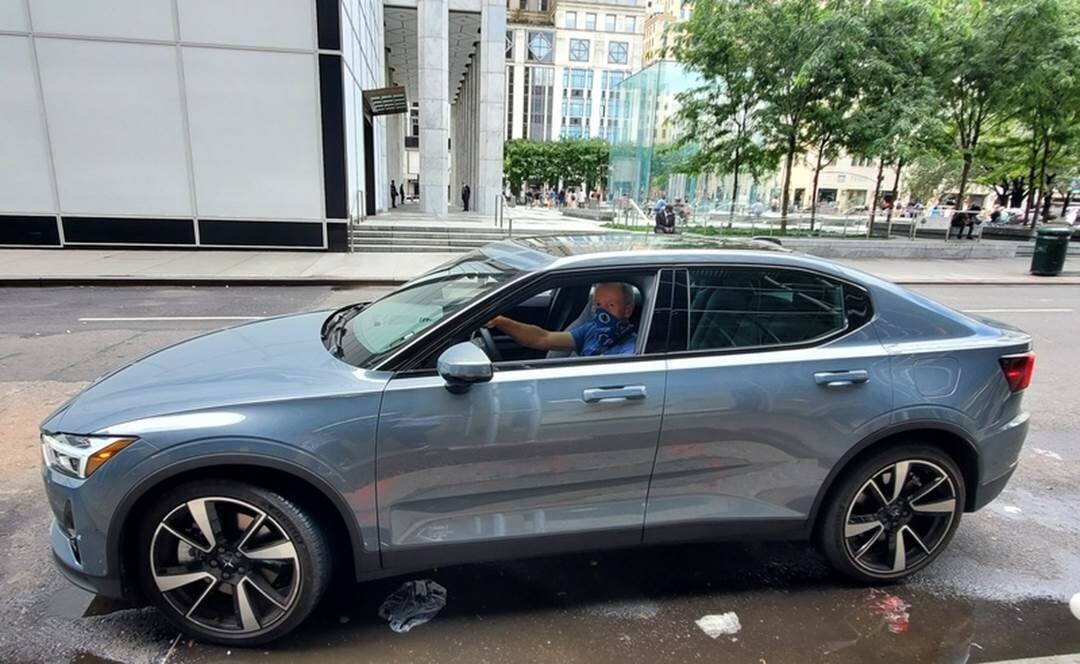 The salesperson and I did a three-mile loop up Madison Avenue, across Central Park, down Central Park West, and back to the showroom, so I didn't have a chance to test its acceleration. But it drove smoothly and handled well. Like the cars of its parent company, Volvo, the Polestar appears to be very well built and has all the latest safety features.

I liked the fact that the software system is integrated with Google, including Google Maps (the mapping software built into my 2018 Volvo XC60 is lousy).

You can also talk to the system – for example, you can say, "Hey Google, please adjust the temperature to 68 degrees" and it will supposedly do so (during my test drive, it recognized what I was saying, but didn't turn on the air conditioning – the salesperson said the software can be buggy). I also noticed some bugginess when I turned the seat and steering wheel heating on and off – there was a delay in responding to my finger pushes. Overall, the software interface was OK, but I don't think Polestar owners will be raving about it in the same way Tesla owners do.

I didn't turn on the Pilot Assist, but if it's the same as what's in my current Volvo (I suspect it is), it's not very good. I usually have it on when I'm driving on the highway in case I drift out of my lane, but it's nothing like Tesla's Autopilot.

And there's no supercharger network. The salesperson showed me an app that maps every charger in the area, with kilowatt (kW) capacity and how many charging spots are available. But she wasn't able to answer my question: "For the 174 kW charging station you're showing me, how quickly will it charge the Polestar from, say, 20% to 80%?" My guess is: less than half the speed of Tesla's supercharger.

In summary, my conclusion from July 24 hasn't changed:

The Polestar 2 reminds me of the Jaguar iPace and Audi eTron, both of which have been total busts in the U.S., though have sold better in Europe. I suspect the same will be true for the Polestar 2...