I continue to closely follow the pandemic, sending lengthy e-mails to my coronavirus e-mail list roughly once a week. If you’d like to receive them, simply send a blank e-mail to: [email protected]. 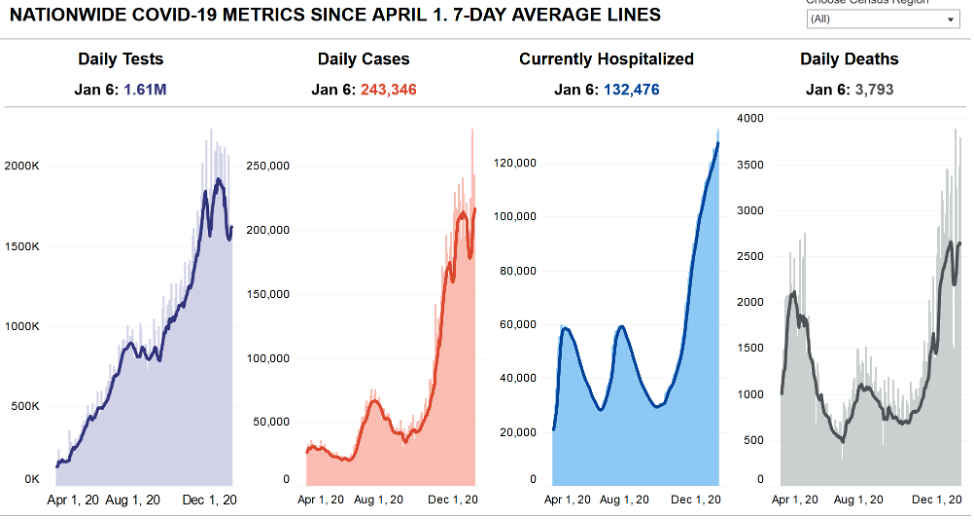 We can see that, after the expected dip in testing around the holidays (leading to a dip in cases), and the dip in deaths due to reporting delays, the COVID numbers are spiking back up. The currently hospitalized data is the best indicator I follow.

My old friend Joe Golton believes that December is going to be the peak of U.S. COVID-19 deaths, much higher than the CDC’s ensemble forecast. He writes:

The ensemble mid-point forecast is for 50,270 deaths during the four weeks ending December 26 (if you adjust that forecast to encompass all of December, it is approximately 56,500 projected deaths).

I have been running a simple spreadsheet model that has been reasonably accurate at short-term forecasting since March and it’s telling me to expect closer to 95,000 deaths in December.

He e-mailed this update earlier this week:

Actual December deaths came out at about 80,000. This was significantly above the 97.5% percentile projection of the COVID-19 ensemble forecast (which was just shy of 74,000 when adjusted to 31 days), but below my 95,000 projection.

I believe there are three reasons my projections proved too high:

1) I modeled Thanksgiving leading to a huge increase in cases. Didn’t happen – the number of new cases/day stayed about the same over the couple weeks I expected the surge to manifest.

2) My 10,000 fudge factor for overloaded hospitals was too high. I don’t know how many people died due to hospital overload. Based on anecdotal evidence from skimming through many articles, I suspect on the order of 1,000, but I have no concrete evidence to back up this assertion.

3) I have used a 25-day lag between officially reported cases and deaths for the past four months. I’m increasingly suspecting that it has lengthened to more like 28-33 days. If there are at least a few days of over 4,000 deaths/day over the next couple weeks, and most days are above 3,500 (except for Sundays and Mondays, when less reporting happens), then I’ll know that the lag has indeed lengthened. It will also mean that the number of people who die will increase from December to January, as a chunk of the death surge I projected for late December got pushed into early January.

I think we’re now in the early 8th inning. I believe that we’ll see another one to two weeks of new cases exceeding 200,000/day (sometimes over 300,000), as the Christmas surge appears to be much higher than the Thanksgiving surge. But then I think that by the end of January, the number of new cases per day will clearly start to decline.

Part of the reason I am predicting a decline soon is the more restrictive policies put in place in many states over the past few weeks. We’re already seeing declining case numbers in SF Bay area, for example, where policies have been very restrictive in recent weeks.

Joe just sent me this update:

Yesterday we saw the first day of more than 4,000 deaths (4,100), so it looks like my over-forecasted deaths in December is in large part due to the 25-day lag lengthening to something longer, perhaps 28-33 days.

I’m thinking closer to 33 days than 28 but the data is very messy with reporting being all over the place through the holidays. I’m just sure at this point that the average number of days it takes to die from a newly reported case is at least a few days more than the 25 I’ve been using for modeling.

3) If you know anyone who is thinking about not getting vaccinated, please send them this video by NYU marketing professor, bestselling author, blogger, and entrepreneur Scott Galloway. Start watching at 1:07:57. Excerpt:

All this bullsh*t narrative around the risks. You are much more likely to be killed by your own dog than have an adverse reaction that results in death from a vaccine. Vaccines are the best thing that’s ever happened to us.

And you know what really frightens me – what I’m hearing from my friends and cohort? The following: “I’m going to wait.”

This is the narcissist’s playbook. “I’m going to see what the long-term effects are. I’m going to wait.”

Well, this isn’t about you. Why? If we don’t get to herd immunity, we’re going to have another 200 million infections. At a 1% mortality rate, that means 2 million Americans are gonna die.

Well, guess what, this isn’t fu*king about you! This is about not being a threat in the web of death that is combing our nation and snaring vulnerable people because of the asymptomatic carriers who have no effects from this. “I’m going to wait?!”

4) There’s been a lot of criticism (see below) about the vaccine rollout, but we’re actually doing well relative to the rest of the world, with the notable exception of Israel (here’s an article about it: How Israel Became a World Leader in Vaccinating Against Covid-19), as this chart shows (source): 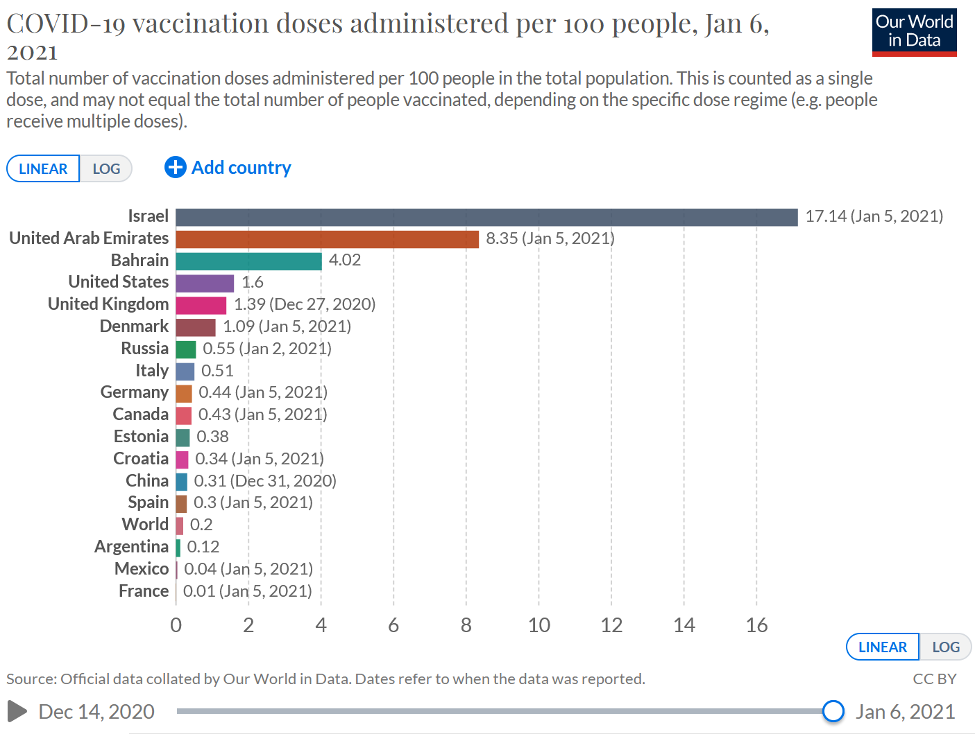 And our trend line is very steep, which is great news (this chart excludes Israel so we can see the other countries): 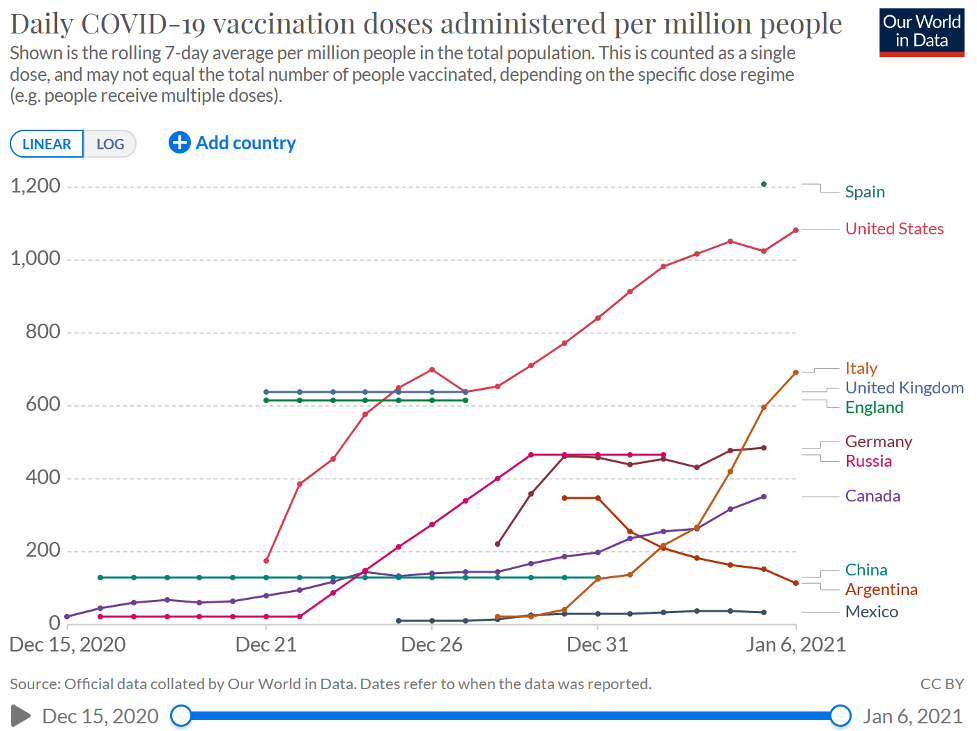 To read the rest of my e-mail – in which I discuss vaccines in more depth, the mutated virus, California and Arizona getting hit hard, why nursing homes failed, and a hospital network in New York suing patients for unpaid bills – click here.

P.S. It’s so strange being on the other side of the world on Lamu Island, Kenya, while a pandemic is raging…

In the fall, when we planned this three-week trip to visit my parents and sister, who live here, we didn’t anticipate the added bonus of this being a great place to avoid COVID-19. There are no idiotic political battles about mask-wearing here and, with the beautiful weather, we’re spending nearly all of our time outdoors.

Sadly, we’re flying home tomorrow night. I wish we could stay longer in a safe and stable country like this one… (I say only slightly tongue-in-cheek, sadly…)