My webinar tonight; My special report: Why I'm Optimistic That We'll Soon Stop the Coronavirus; We need to do some random testing right now; Our low mortality rate; Has the COVID-19 response gone too far?; Consider the costs

1) A final reminder… I’m hosting a free webinar with my colleague Enrique Abeyta tonight at 8 p.m. Eastern time on the coronavirus crisis and its implications for investors.

I’ve given hundreds of presentations over the years – including a number in which I warned investors about the financial crisis in 2008 and 2009 long before it happened.

But this presentation is likely the most important of my life.

It’s free to attend, and we’ll be giving away two of our favorite stock ideas as a thank you for watching. You must sign up in advance, however – save your spot right here.

During the event, Enrique and I will explain why we’re cautiously optimistic that the measures we’ve ramped up over the past few weeks are having their desired effect, sharply reducing the coronavirus’ replication rate and, therefore, the growth in the number of newly infected Americans.

As it becomes clear that we’ve controlled the spread of the virus and know exactly where the outbreaks are – which could happen as soon as a couple of weeks from now – we can start bringing our economy back to life – and stocks will go nuts!

To repeat what I’ve said before: this is the absolute best time to be an investor in more than a decade. To borrow a phrase from a friend of mine, “we’re trembling with greed” right now.

2) I’m putting the finishing touches on a special, in-depth, report entitled “Why I’m Optimistic That We’ll Soon Stop the Coronavirus.” We’ll be sending it tomorrow to Empire Investment Report subscribers (including those who sign up during the webinar tonight).

The One Thing We Need to Do Right Now: Some Random Testing

As we try to combat one of the greatest threats our nation has ever faced, we’re unable to make good decisions about what actions to take – and where – because we don’t have even the foggiest notion how many people are actually infected right now, where they are, and how rapidly the virus is spreading.

Without at least some idea of the answers to these three questions, we’re blind, thrashing about, unable to mount an effective defense against this terrible scourge.

What if we just have a few outbreaks in a handful of major cities? If so, we could take the strongest measures in these areas, but much of the rest of the country could quickly get back to work.

On the other hand, if the virus has spread to every corner of the country, then a complete national shutdown – at least for a couple of weeks – is likely necessary.

But since we don’t know where the virus is and how quickly it’s spreading, those who are making the most extreme predictions are getting the most attention – and nobody can prove them wrong, so our response has been to err on the side of caution.

While this may be the right approach from a public health perspective, it’s imposing a terrible – and perhaps unnecessary – cost, crippling most businesses and throwing untold millions out of work.

We can’t possibly sustain this for much longer, so we need answers fast.

Widespread testing is ultimately the solution. As former FDA Commissioner Scott Gottlieb recently tweeted: “In order to contain the epidemic, we need broad screening… so we can identify positive cases in the community and contain the spread.” This is the lesson from every place that’s successfully contained the virus.

Ideally, of course, we’d have a quick, cheap, easy test that every American could take – and that would be required of anyone seeking to enter our country. I have no doubt that this is where we will end up, but it will take time.

In the meantime, after a disgraceful lack of action, we’re finally ramping up testing in a big way. As recently as 10 days ago, we were doing barely 7,000 tests every day, nationwide, but that has risen to 66,000 yesterday and is rising fast, as you can see in this chart: 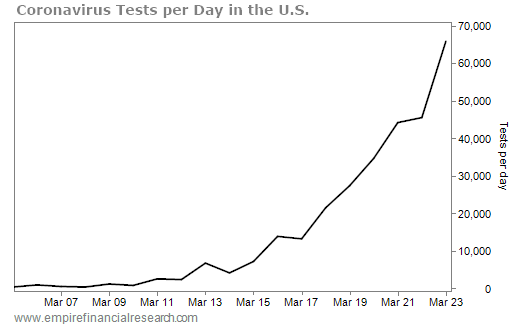 But there are two problems with our testing right now. First, 66,000 tests a day is a drop in the ocean. Even if this expands rapidly, it’ll be weeks, if not months, before we’ve tested enough people. We need answers within days.

The second problem is that, from a statistical perspective, we’re testing the wrong people: those with symptoms or who were exposed. In doing so, we’re not getting much useful information to answer the three key questions: how many people are actually infected right now, where they are, and how rapidly the virus is spreading.

What we need to do, in addition, is some random testing, just as we do when we poll political races.

We have developed sophisticated methods by which we can survey just a few thousand people and almost precisely predict how the entire population will vote. The key, however, is to survey random people. Imagine the results if pollsters surveyed only people at, say, a Trump rally – but that’s what we’re doing right now with our coronavirus testing!

I’m not saying we should stop testing those who need it – I’m just saying that a small fraction of the tests should be random, so we’ll get the information we so desperately need. Yesterday, for example, New York tested 16,888 people. Imagine how much more we would know right now if we did 1,000 tests every day on a random group of New Yorkers.

We need to start doing this all over the country, right away. There’s no time to waste!

3) Amidst the gloom and doom, I wanted to share a bit of good news: so far, our mortality rate is among the lowest of the 12 countries that have been hit the hardest by the coronavirus: 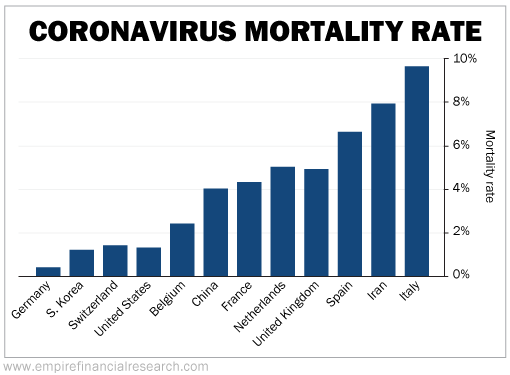 4) Here’s a good article on the debate among scientists, which highlights the need for testing that I call for above: Prominent scientist dares to ask: Has the COVID-19 response gone too far? Excerpt:

It’s a clash of titans – an epic battle between two famous scientists over the world’s response to the COVID-19 pandemic.

In one corner, influential Stanford University epidemiologist John Ioannidis, who wrote a commentary asking whether taking such drastic action to combat the pandemic without evidence it will work is a “fiasco in the making.”

Across the mat, prominent Harvard epidemiologist Marc Lipsitch punched back with a defiant response titled: “We know enough now to act decisively against COVID-19.”

Watching from the sidelines? Everybody else. The people who worry the world has gone too far too fast.

And those afraid the response hasn’t come fast enough.

The debate comes down to questions about data. What is the true fatality rate of COVID-19? How many people are already infected?

“Better information is needed to guide decisions and actions of monumental significance and to monitor their impact,” Ioannidis wrote. “In the absence of data, prepare-for-the-worst reasoning leads to extreme measures of social distancing and lockdowns. Unfortunately, we do not know if these measures work.”

But there are some key questions that need to be answered in order to make sound decisions going forward, he said.

“We desperately need to know, No. 1, the prevalence of infection, and No. 2, the incidence of new infections,” he said. “If we make decisions with such tremendous uncertainty, we can get tremendous harms.”

The lack of data is one point on which Lipsitch and Ioannidis agree.

“The U.S. has done fewer tests per capita so far than almost any rich country in the world,” Lipsitch wrote. “And many critical details of the epidemiology – including the absolute number of cases, the role of children in transmission, the role of presymptomatic transmission, and the risk of dying from infection with SARS-CoV-2 – remain uncertain.”

5) And here’s another good article cautioning against overreacting: Consider the costs. Excerpt:

Less than 24 hours after California governor Gavin Newsom closed “non-essential” businesses and ordered Californians to stay inside to avoid spreading the coronavirus, New York governor Andrew Cuomo followed suit. “This is about saving lives,” Cuomo said during a press conference on Friday. “If everything we do saves just one life, I’ll be happy.”

Cuomo’s assertion that saving “just one life” justifies an economic shutdown raises questions that have not been acknowledged, much less answered, as public officials across the country compete to impose ever more draconian anti-virus measures:

To ask about the costs and benefits of the spreading economic shutdowns guarantees an accusation of heartlessness. But the issue is not human compassion versus alleged greed. The issue is balancing one target of compassion against another. The millions of people whose lives depend on a functioning economy also deserve compassion. Many of the businesses that are now being shuttered by decree will never come back. They do not have the reserves to survive weeks or months without customers. In New York City, many streets were already blighted by rows of empty storefronts. The virus shutdown could knock out the remaining enterprises, as customers acclimate themselves further to ordering on-line. Layoffs are piling up in restaurants, hotels, and malls; on Tuesday, unemployment claims in California were 40 times above the daily average, an increase greater than any coronavirus surge.

It is low-wage employees who are most being hurt. The knowledge class can shelter in place and work from their home computers. Their employers are not shutting down. Not so people who physically provide goods and services. The employees who have been let off now may not be able to find work again if the economy continues to collapse. While governors and mayors declare some businesses essential and some not, to their employees, they are all essential.

A prolonged depression will stunt lives as surely as any viral epidemic, and its toll will not be confined to the elderly. The shuttering of auto manufacturing plants led to an 85% increase in opioid overdose deaths in the surrounding counties over seven years, according to a recent study. Radical social upheaval is possible.