My 'spidey sense' is going nuts, so I'm calling the top of the short squeeze bubble; My Short Squeeze Bubble Basket; 'Down 30%, 50%, 80%'; A big unwind; 'This is a speculative mania'; GameStop Is Rage Against the Financial Machine; Final pics from Big Sky; Flying tip

1) Back in September, I wrote two e-mails about how I’ve used my “spidey sense” to identify the tops of numerous investment bubbles.

Second, for months another friend has been resisting his 11-year-old’s pleas to lend him $50,000 to speculate on stocks – but he finally broke down and texted me last night:

At his request and from his account, I will purchase AMC and GameStop (GME) for him tomorrow. He is literally bawling, PLEADING, and yelling at me:

TikTok tells me which stocks to buy. Every time you tell me something is risky, you are wrong. This time they are worth it and will go up! I want to buy more, I want to buy on margin. They will loan me the money. Please, please BUY ME MORE AMC ON MARGIN – I know it will go up!

Lastly, the 25 stocks I identified in yesterday’s e-mail were, as I predicted, up big – by an average of 57%, as this table shows:

All of this makes me think yesterday may have been a blow-off top (though I may be two days early, as things could get even more crazy going into options expiration tomorrow)… So, as I promised in yesterday’s e-mail, I’m going to use yesterday’s closing prices to mark my “Short Squeeze Bubble Basket.”

Here’s the spreadsheet I’m using to track it – note that I replaced Signet Jewelers (SIG) and The Children’s Place (PLCE) with two much worse stocks, World Acceptance (WRLD) and Electrameccanica Vehicles (SOLO):

My guesses would be the same…

3) Big losses on the short side are forcing many hedge funds to raise capital by selling their long positions. It’s leading to a big unwind, as this Bloomberg article highlights: Short-Squeezed Hedge Funds Are Now Getting Hit on Their Bullish Bets Too. Excerpt:

With a full-blown retail raid targeting their short books, many of the stocks hedge funds are bullish on are suddenly in trouble, too. That has prompted the industry to cut their risk appetite at the fastest pace in more than a year.

Square, Roku, and Peloton Interactive, among the industry’s favorite stocks, each tumbled at least 3% Tuesday while GameStop continued to lead a rally among companies with the highest short interest. Shares of the video game retailer spiked more than 65% in late trading after Elon Musk tweeted about it.

The Goldman Sachs Hedge Industry VIP ETF (ticker GVIP), tracking hedge funds’ most popular stocks, fell for a fourth straight day, the longest stretch since October. That coincided with a 15% rally in a basket of the most-hated shares over the stretch.

In a market where bearish wagers are backfiring like never before, one way to mitigate career risk might be to sell stocks that had previously been working – even if that means parting with some beloved companies.

“The recent squeeze in heavily shorted stocks has been nothing short of extraordinary,” said Jonathan Krinsky, chief market technician at Bay Crest Partners. “If shorts cause too much pain, there is usually some repercussion on the other side as longs have to be sold to offset losses.”

4) One of my readers e-mailed me last night:

He argued that what’s happening with GameStop reflects the democratization of investing, that the people on Reddit are really smart momentum investors, and that this is a way for the working class to amass capital quickly!

He couldn’t be more wrong. This is a speculative mania driven by lockdowns, boredom, government stimulus checks, limited options to spend money, most entertainment closed, and a giant bull market.

I think what we are seeing is pure gambling and speculation.

I am sure there are a few very astute players on the Reddit boards, but the vast majority are just the greedy, clueless herd climbing aboard. It will end badly and a lot of people will lose money that they should be investing for the long term instead of speculating for instant profit.

Another friend added: “U.S. stocks are now trading more like Chinese stocks, based on rumors, crowds, short-term news/rumors, and fund flows, not fundamentals.”

I couldn’t have said it better myself!

5) I think there’s one other major driver of the nuttiness we’re seeing, which is captured by Bloomberg columnist John Authers in this brilliant article: GameStop Is Rage Against the Financial Machine. Excerpt:

Alienation has deepened since then. Short-selling hedge funds are now seen as part of a corrupt establishment, as is the media. The motives of anyone defending the shorts, or anyone wearing a suit, must be suspect. And there is a deep generational divide; those unable to own their own home and forced to rely on defined contribution pensions have a stunningly unfair deal compared to those a generation older, living in mortgage-free homes with guaranteed pensions. That percolates into anger, and a determination to right the scales by making money at the expense of corrupt short-sellers.

We lack precedents for an angry bubble, so predictions are even harder than usual. But there are enough similarities with past incidents to raise serious cause for concern.

First, the little guys have had their success so far with the aid of margin accounts, and by using derivatives. We know what happens when these things are used to excess; even the Dutch tulipmania relied on margin debt and derivatives. Little guys (and everyone else) deserve safer tools with which to build wealth.

Second, “democratization of finance” isn’t new, and in itself is nothing that anyone can object to. The problem is that investment and financial planning are difficult, and require time. Regulate these things, and you no longer have true democratization. Leave people free to take chances, and you get disasters like the bursting of the dot-com bubble in 2000. That also followed plenty of hype about the success of the “little guy,” and the first great explosion of online discount trading succeeded in sucking an army of new retail investors into the bubble’s final climax. Unregulated “democratization” led to the little guy bearing the brunt of the losses.

“Democratizing” finance also leaves newly enfranchised financial citizens prey to spivs and frauds. I started my career covering the disastrous repercussions of one of Margaret Thatcher’s last reforms in the U.K. – giving people the right to leave their defined-benefit pensions, offered by employers, and take on defined-contribution “personal pensions.” Unscrupulous salesmen persuaded miners, firefighters and police officers to abandon copper-bottomed index-linked pensions for plans that came burdened with excessive charges. It was a repellent spectacle, and the bill for compensation was in the billions.

These points doubtless make me appear to be a complacent shill for the financial industry, talking down to the rubes. For the record, I’m still angry about the way workers were ripped off in Britain more than three decades ago, and about the way the little guy ended up bearing the brunt for the financial implosions of 2000 and 2008. But it looks horribly to me as though the same thing is going to happen again – and I don’t think the answer to today’s many ills is to empower poor people to bankrupt themselves with margin accounts and derivatives.

Anger, even more than greed, has the capacity to make us throw caution to the winds. Many of us have a lot to be angry about. If this carries on, and spreads beyond targets like a video-game retailer, I don’t want to see the consequences when history’s first angry bubble bursts.

While many hedge funds have taken a beating this year, mark my words: this foolishness is certain to end very badly for the “little guys.” So don’t be tempted to join the party at this late date – and if you’ve profited from one or more of the stocks that have been squeezed to the moon, take your profits and run!

6) Kevin and I got up early yesterday to be first on the mountain so that we could squeeze in 10 runs before we had to catch our 1:00 p.m. flight home. Here’s a picture of me with the Big Sky summit in the background: 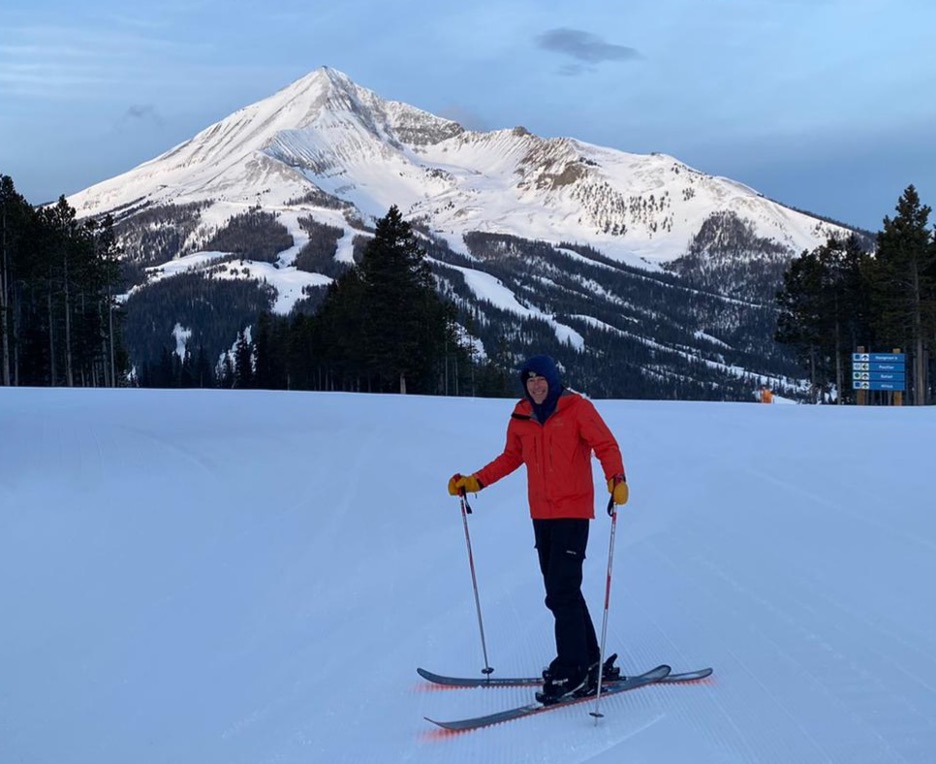 And here’s a picture of all of us on the summit on Tuesday:

7) As usual, our two flights on American Airlines (AAL) weren’t even half-full. Here’s a tip: If you’re offered a low-cost upgrade to business class (as I was), don’t take it (unless it’s a flat seat and you’re flying internationally). There’s plenty of room in coach – we both had three seats to ourselves – and it’s less crowded, so there’s less risk of being exposed to the virus.