1) In my January 26 e-mail, I stuck my neck out and made a prediction about video game retailer GameStop (GME):

It turns out that I was too conservative in my first prediction: GameStink hit $53.27 intraday on February 9, only two weeks later!

In addition, in my January 28 e-mail, my analyst Kevin DeCamp and I predicted (while freezing on a chairlift at Big Sky) that my 25-stock “short squeeze bubble basket” would crash 30%, 50%, and 80% over the subsequent one, three, and 12 months, respectively.

Again, I was too conservative: Yesterday, only three weeks later, the basket of turds was down 30% intraday, led by GameStink’s 88% collapse.

The lesson here is clear: Kevin and I should do more skiing together – LOL!

Edwin Dorsey – who publishes the excellent The Bear Cave newsletter (discussed in my January 5 e-mail) – gave me permission to share this excerpt from what he sent to his subscribers:

AgEagle Aerial Systems (NYSE: UAVS – $826 million) describes itself as a “pioneer in advanced commercial drone technologies” and has promoted the rumor of an Amazon partnership. In reality, the company owns no patents, currently uses an external part-time Chief Technology Officer, and has spent approximately $40,000 on research and development in the last three years. An Amazon spokesperson has denied any partnership. AgEagle has also taken financing from a Lichtenstein-based hedge fund involved in pump-and-dumps.

The substance of AgEagle as a business is small. According to the company’s most recent 10-K, AgEagle employs six full-time employees and owns no patents. On LinkedIn, the company currently has 12 employees. In its most recent 10-Q, AgEagle disclosed having only $7,109 of finished goods and on page 34 of its 2019 10-K the company discloses, “Research and development costs in 2019 were $38,948, compared to $0 in 2018.”

AgEagle has not broken out research and development costs in its 10-Qs for 2020. However, on page 31 of its most recent 10-Q, the company did disclose, “The Company contracted external fractional CTO services to a firm whereby one of our board members is currently a shareholder. For the three and nine months ended September 30, 2020, the Company paid $25,000 and $86,000 in fees.”

AgEagle’s single Glassdoor review also raises concerns about the company: “What unfolded over my short stint at this place was the biggest cluster[mess] I have ever experienced in my life… It was clear that the job I was hired to do did not exist… if you categorize yourself as any sort of geospatial professional, don’t come anywhere near this place.”

Unsurprisingly, AgEagle’s “drone” appears to be a remote-controlled plane hooked up to a GoPro camera: 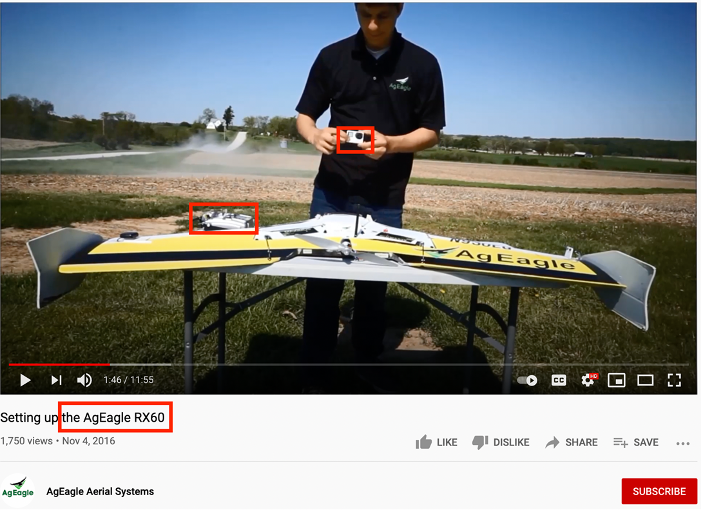 In April 2020 rumor of a partnership between Amazon.com & AgEagle was started by a promotional video uploaded to AgEagle’s founder and former chairman Bret Chilcott’s daughter’s personal website and YouTube account (the “Promo Video”). Since then, a 54-page due diligence document has circulated on Reddit which at various times referenced the Promo Video and suggested that the AgEagle’s partnership with Amazon was real.

We have found no evidence of any “major e-commerce customer” or any drone technology credited to AgEagle other than reference to the Promo Video leaked by AgEagle’s founder and former Chairman Bret Chilcott’s daughter.

In 4Q’20 an Amazon spokesperson disclosed to reporter Daniel McCoy of the Wichita Business Journal that Amazon specifically does not have any dealings with AgEagle whatsoever.

UAVS stock skyrocketed on fake Amazon partnership rumors from $0.39 to $16. THE PUMP!

While insider ownership declined from 44% to 0.5%. THE DUMP!

Don’t be tempted to bottom-fish this one… Shares are headed below $3, which is where the stock was as recently as December.

3) I just listened to the third episode of my colleague Enrique Abeyta’s new Hard Money’s Million Dollar Podcast, in which he’s trying to turn his friend’s $10,000 stake into $1 million in a matter of months (a strategy that isn’t suitable for 99.9% of investors!). I first wrote about this a week ago.

4) On Tuesday, over the course of six hours, I recorded the audio version of my forthcoming book, The Art of Playing Defense. Then, yesterday, I was in Baltimore recording two lengthy videos in the studios of Stansberry Research. My throat is so sore!

I took the Amtrak Acela back to New York City yesterday afternoon. Pre-pandemic, it would have been standing room only, but yesterday it was only 10% full, as you can see in this picture…