My Annual Rant on Medicare Drug Pricing Part 2: How Mark Cuban Is Taking on the Legal Drug Cartel

My rant last week on Medicare drug prices and plans apparently struck home based on reader feedback, which was off the charts...

I'll include some of the responses in a future essay, but one recurrent theme was that I should give billionaire Mark Cuban's Cost Plus Drug Company a second look. I had mentioned it but said its drug pricing was still slightly higher than what I could find elsewhere.

After seeing the effusively positive comments from readers and hearing from Mark himself, I went back and took another run through the website with my meds.

I found that not only did his pharmacy cover more of my meds than when I last looked – which wasn't that long ago – but the prices were lower... and in some cases, remarkably so.

The more I looked, the more I was impressed...

What Mark is doing – or at least attempting – is almost single-handedly disrupting the way drugs are sold...

In the process, he may very well be playing a central role in weakening, or even (let's hope!) killing, the legal drug cartel that has made the pharma system absurdly obtuse, overly complicated, and deeply opaque.

I'm coming at this as somebody on Medicare, which adds a few wrinkles to the complexity of the situation.

And while affordability isn't my issue, as I explained in my first salvo last week, it's the principle... and the fact that prices for the very same generic blood pressure, heart, or any other type of drug can vary wildly, in some cases by hundreds of dollars.

Again, I stress... these are generics – the very kind of drugs whose patents have lapsed, are made by private-label manufacturers, and are supposed to be... cheap.

But even if you're on Medicare – and more specifically on a 'Part D' drug plan – there are ways to hack the system and dramatically lower your prices...

I ran through my process in my previous essay. A big part of it involves the arduous process of adding and subtracting drugs from various plans offered by Medicare, and then manually running each drug through the likes of Cost Plus, GoodRx (GDRX), and the "cash" prices offered at Walmart (WMT), Costco Wholesale (COST), and any other discounter you can think of.

They're all alternatives, with prices often within a few dollars of one another and often less than the price offered under the various Medicare plans. But that, of course, depends on the monthly premium and other factors, such as whether your meds are in the so-called "formulary," whatever that really is. And that, for some inexplicable reason, changes from year to year. Trying to know whether your meds will be in or out is like trying to pick which hat the pea is under.

If you ignore this process, you stand to spend hundreds if not thousands more every year...

The big surprise, based on my most recent scan, is that Mark's operation seems to be pulling away from the pack on pricing.

One reason may simply be that he deals directly with the drug companies and charges a mere 15% over cost. On top of that, he charges a $3 fee per prescription and $5 shipping on an order of up to five drugs.

By doing this, he skips the cartel entirely. By "cartel," I'm talking about the pharmacy benefit managers ("PBMs"), who pretty much dictate how drugs are priced... and even dare to suggest you take something different than the doctor ordered. In turn, this forces them to hire staff just to handle appeals of drugs "not covered."

The whole situation seems beyond belief.

Then in walks Mark Cuban...

I first met Mark a few decades ago at an America Online content-providers event, when he sat down at the table I was sitting at with a colleague for breakfast, and he said, "Hi, I'm Mark." We shook hands. I had no idea who he was, but he was a nice enough guy. We exchanged some small talk, and that was it... But for some reason I remembered him.

And then a few years later when Mark hit it big by selling his Broadcast.com to Yahoo for nearly $6 billion, I thought... "I met that guy."

When I was a journalist, after he became a somebody, we would talk or e-mail every now and then. We'd say hi when he stopped by CNBC. He seemed unaffected and genuinely having fun with his billions.

One thing that became clear was that he didn't like frauds. He liked exposing them so much that in 2006 – before activist short selling was what it is today – he created the website Sharesleuth. He hired journalist Chris Carey to run it. Chris hired other journalists, including my friend, the investigative journalist Jim McNair, to help in the sleuthing.

Mark's role is that he sometimes takes short positions in companies they investigate, never making a big deal about it.

So, it makes sense that he would be the one to take on big pharma – or really, not big pharma, but the cartel... the PBMs.

After all, that's really what he's doing.

And it's surprising that until now, nobody else has done it... at least, not the way he has, or has gotten this far. 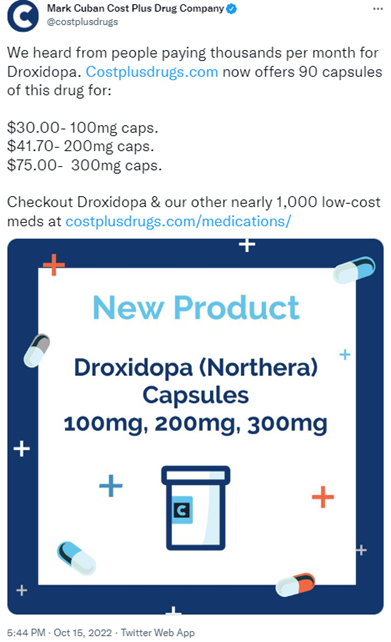 Based on my most recent analysis of my situation, the savings aren't that enormous... But for a few drugs, they're still pretty good.

After running my cocktail through the 2023 Medicare plans, along with mixing and matching alternative options, I'll probably choose a plan with a fairly low monthly premium.

Some people self-insure by not using any Medicare plan... I prefer the backstop of one in the unlikely event that something happens and I need a catastrophically expensive drug.

I'll continue to spot-check pricing, but based on current prices I'll probably use Cost Plus for one or two of my meds that for whatever reason – although generic – are grossly overpriced on all but the most expensive Medicare plans.

One for sure will be the blood pressure drug eplerenone, which I mentioned in last week's essay. On GoodRx, when I checked last week, the best I could do was $236 per year at Costco.

Cost Plus didn't carry it, but after Mark contacted me, he checked with his folks and they found out that they could get it... and sell it at a price of around $100 per year.

Lo and behold, a few days later – coincidence of coincidences – I checked GoodRx, and its lowest price at Costco and a few others had plunged to around (drumroll!) $100...

This is totally screwy.

The trouble with GoodRx, of course, is that unless you sign up for one of its premium plans, it's a coupon – and you never know what the price will be the next time you go.

I'm assuming the company's out-of-the-blue discounting for eplerenone is the result of a chatty industry where somebody caught wind that Cost Plus was planning to add the drug and realized GoodRx needed to match it.

It's like a race to the bottom, but for how long?

Either way, as a consumer, I see that Mark is having an impact on pricing.

As a result, the news spreading – most of it seemingly word-of-mouth. And it's clear that Cost Plus can't keep up with the demand. According to a warning in the "cart" area of its website...

Due to significant increases in volume we are experiencing delays in filling patient orders and in responding to order status inquiries. We are adding additional equipment and personnel to reduce our fulfillment times as quickly as possible. In the meantime, please allow approximately 4 additional days for your order to be fulfilled plus the expected shipping time. We appreciate your patience.

If brick-and-mortar pharmacies are having trouble hiring techs and pharmacists, I can't believe Cost Plus isn't as well.

Mark will only say...

Our biggest challenge is scaling across the board. We are growing so fast it's always nonstop.

I'm sure it is, but there's something else I was wondering about...

Cost Plus' prices are so low that I had to ask whether this is just another Uber-like setup... where Mark is quietly subsidizing the prices and creating an illusion of low prices, until the subsidies fall away. He responded...

No. This isn't Silicon Valley. We aren't making money, yet. But we will.

That sounds good to me – I'm in favor of anything that even remotely attempts fix this mess.