More on why I'm cautious; We're not making as much progress as I'd hoped for in defeating the coronavirus; Three fascinating charts

1) I'd like to elaborate on what I wrote in Tuesday's e-mail about being cautious in the short- to medium-term:

I've been doing quite a bit of selling – I'm banking the profits I made by investing aggressively from March 9 through April 1.

At its peak, the total equity exposure of my combined accounts, reflecting my entire net worth except the value of my apartment, was more than 70%. Today, it's 55%... so I have plenty of "dry powder" to put to work should the market get volatile again in the next few months, which I think is likely.

But I don't think any of this will matter in five years or more, so you don't need to do anything with your long-term savings.

I'm cautious for two general reasons: a) we're in an enormous hole, which will take years to dig ourselves out of (more on this in tomorrow's e-mail)... and b) we're not making as much progress as I'd hoped for in defeating the coronavirus – and I think this will continue to be the main driver of stock prices.

2) In my report on Why I'm Optimistic That We'll Soon Stop the Coronavirus, which I was writing at the very moment the market bottomed (and published only two days afterward on March 25), I wrote:

I'm cautiously optimistic that the measures we've ramped up over the past couple of weeks are having their desired effect, sharply reducing the coronavirus' replication rate.

If I'm right, the growth in the number of newly infected Americans is already slowing dramatically – and will soon plateau and then decline, which is exactly what happened in China's Hubei province...

As it becomes clear that we've controlled the spread of the virus and know exactly where the outbreaks are – which could happen as soon as a couple of weeks from now – we can start bringing our economy back to life.

A key pillar of my bullishness was not only seeing the light at the end of the tunnel – I was right about that – but also that, once we reached it, there would be a quick, "V-shaped" recovery.

In my view, that's now highly unlikely. As you can see in the charts below, we did indeed flatten the curve and avoid the worst-case scenario, but we aren't even close to seeing the big drops in cases and deaths that I expected based on other countries' successes.

In fact, excluding the progress in three hotspots (NYC, Detroit, and New Orleans), new cases are continuing to rise, as you can see in the chart below from the New York Times (yes, some of this is due to more testing, but only a small part – the overall trend is clear and real): 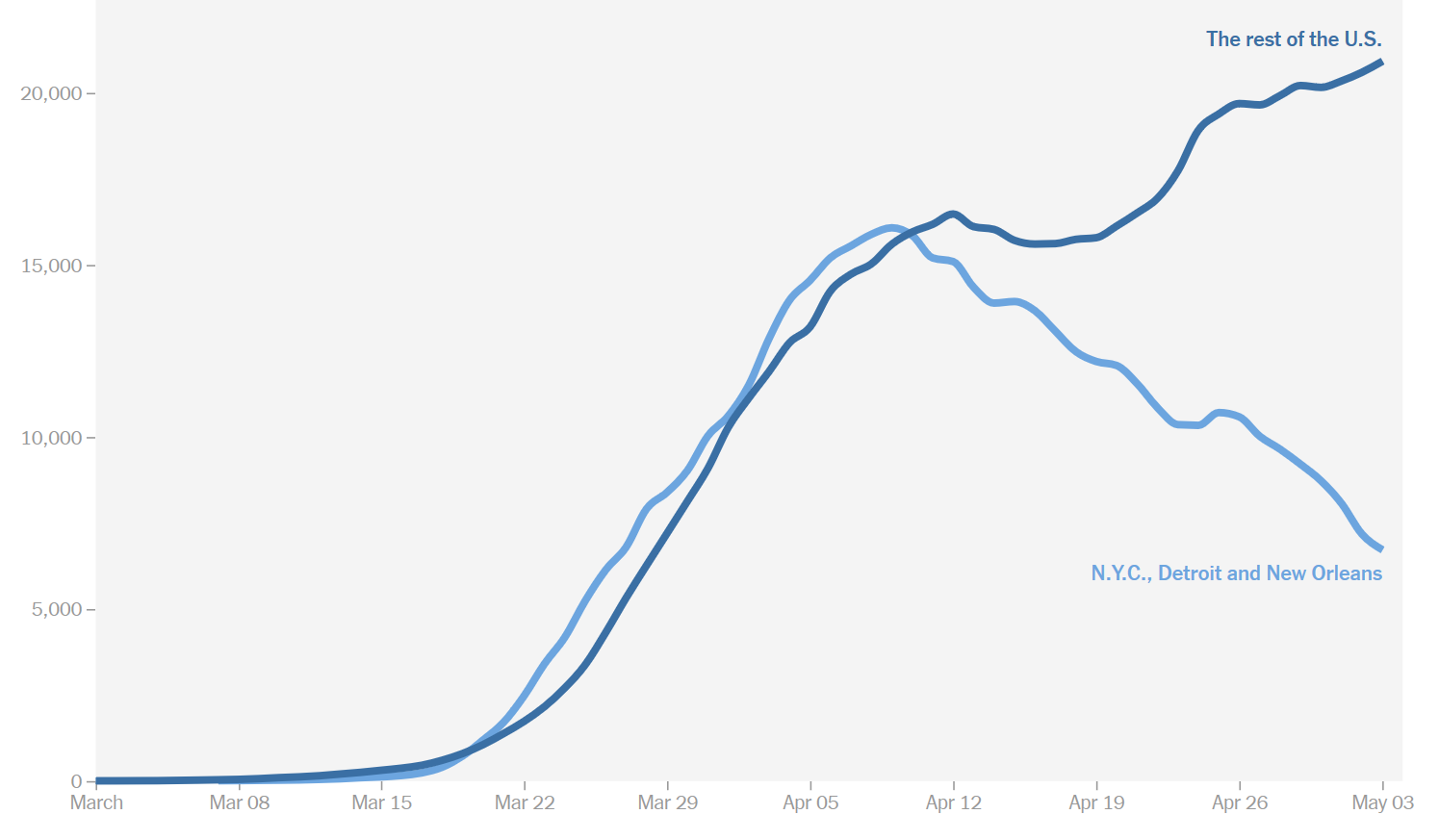 Below are more data regarding our worrisome trends.

In summary, I think that, while we're out of the tunnel, the skies are dark and cloudy – and are likely to remain so for the rest of the year.

For reasons outlined in this NYT article, Models Project Sharp Rise in Deaths as States Reopen, I expect daily deaths will remain at 1,000 to 2,000 per day, as medical progress is offset by more infections due to reopening the economy before we've beaten the virus.

As a result, most Americans will continue to be fearful of returning the normal life and activities – even if their state government allows it – which will continue to weigh on the economy and stocks.

3) I sent this out last night to the 4,300-plus folks on my coronavirus e-mail list (to join, simply send a blank e-mail to: [email protected]), and got such a positive response that I wanted to share it more broadly...

Before continuing to read this e-mail, if you are one of the folks who thinks the U.S. death numbers are being inflated as part of a conspiracy theory to undermine the president (per this article: Fight Over Virus's Death Toll Opens Grim New Front in Election Battle), please don't e-mail me about such nonsense or accuse me of partisanship because I am using – egads! – facts! If you don't wish to receive my coronavirus e-mails, simply send a blank e-mail to: [email protected].

It's open to debate how well or poorly this administration has handled the crisis, but I view it as an insult to our frontline medical professionals as well as the memories of the 80,787 Americans (and rising by roughly 1,200 to 2,400 per day) who've died from COVID-19 to make this ridiculous accusation. In reality, as I've shown in many previous e-mails, the deaths from the coronavirus are almost certainly significantly understated.

I think it's the former consultant in me (BCG, 1990 to 1992), but there are few things that get me as intellectually fired up as: a) an insightful, original piece of analysis, that: b) can be shown in a slick chart that needs little verbal explanation.

For both of these reasons, I'm pretty fired up about these three charts...

1) This first chart shows COVID-19 deaths per day (trailing seven-day average) for the U.S., the tri-state area (New York, New Jersey, and Connecticut), and the U.S. ex the tri-state area. It reveals that, while the U.S. has shown a slight decline overall, this is entirely due to a meaningful decline in the tri-state area. Excluding this, daily deaths are still rising across the other 47 states: 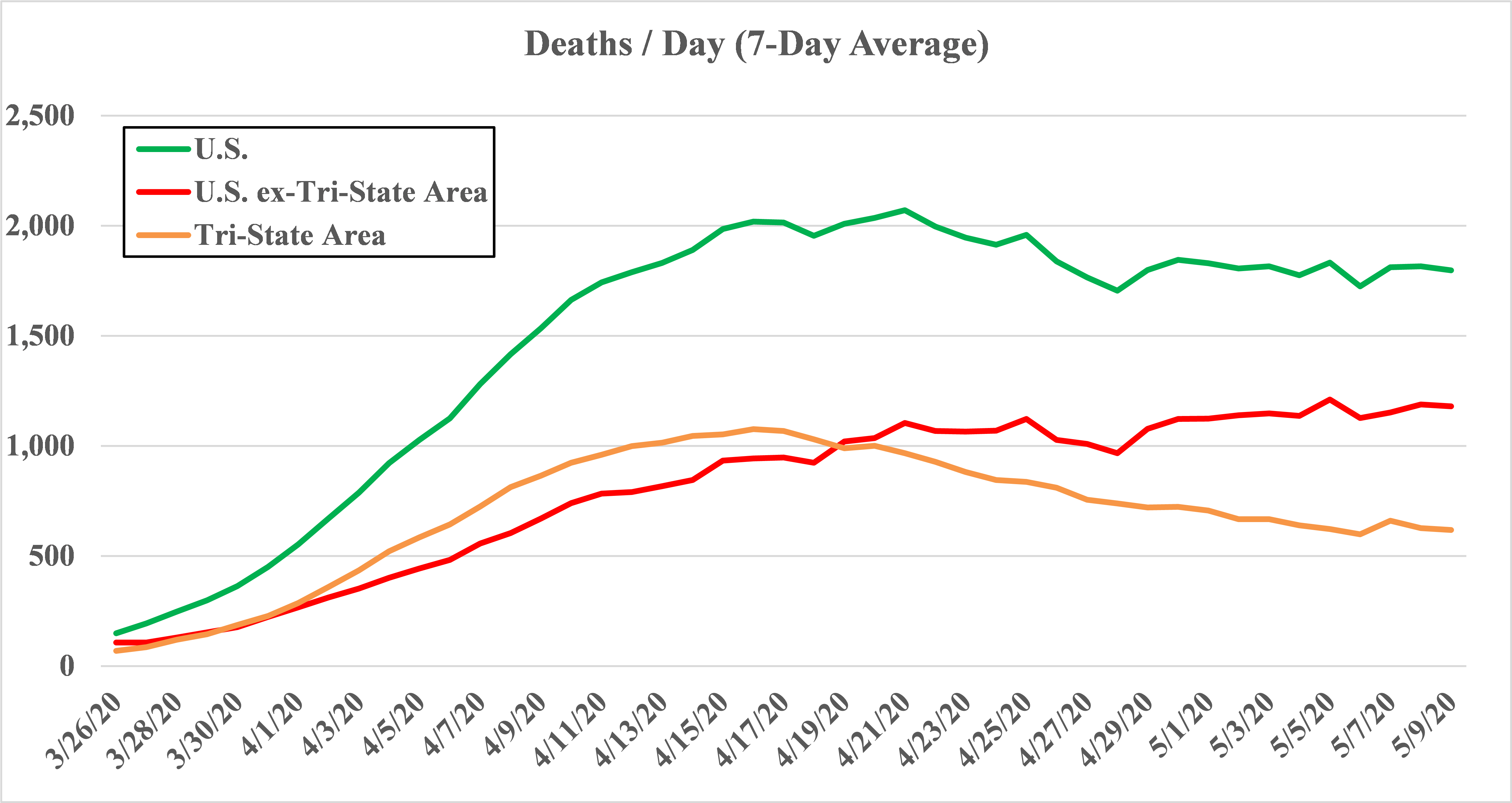 2) While the rising deaths per day in the rest of the U.S. is a worrisome trend, keep in mind that the population in the other 47 states is 9 times larger (33 million versus 298 million = 331 million total), so it's not as worrisome in terms of deaths per capita.

This next chart shows deaths per day (again, seven-day average) for the New York, New Jersey, and Connecticut region and the U.S. (ex the tri-state area), based on every 10 million of population. You can see how much harder hit the tri-state area was (New York was 14 times the non-tri-state average at its peak) – and, despite the declines, still is (4.4 times today, with New Jersey and Connecticut even higher):

3) The last chart is the same analysis, but now comparing the U.S. to nine other countries: five very hard-hit ones (France, Italy, Spain, and the U.K.), four less hard-hit (Germany, Sweden, Canada, and China), and one with a rapidly expanding crisis (Brazil):

Some things to note...