More on how I've nailed the top of so many bubbles: my 'spidey sense'; Seth Klarman; Excerpt from my upcoming book

1) Following up on Monday's e-mail – in which I wrote about how I rely on my "spidey sense" to identify investment bubbles – one sign I look for at market peaks is when investing legends are being dismissed as out-of-touch, past-their-prime fuddy-duddies.

Exhibit A today, as I've written about many times, is the legendary Warren Buffett. His conglomerate Berkshire Hathaway (BRK-B), despite being one of the greatest wealth-creation vehicles of all time, is currently trading at a roughly 20% discount to its intrinsic value.

But until this Institutional Investor article, I hadn't yet read about anyone taking shots at another investing legend, Seth Klarman of Boston's Baupost Group: 'I Can't Believe I'm Saying This, But I'm Passing on Seth Klarman' Excerpt:

But doubts have begun to percolate within the elite investor class, an investigation by Institutional Investor reveals.

"We're walking away," says one capital allocator. It's not clear whether or not Baupost knows this yet. The firm declined to comment for the story.

"Seth is running Baupost more like a wealthy person might run their personal money than like the aggressive hedge fund manager that he's been over the years," the investor says. "He has pretty considerable net worth and all of his money invested in that firm. Other people's fees are paying for him to run his personal money. If you want to come along, come along." But that allocator won't.

"Even though we have terribly high regard for Seth," the investor went on, "this isn't what we want. Performance is slipping; the strategy changed. It's not the consistent, thoughtful type of process and results that they had for a couple of decades." Baupost's best days have passed – at least for the firm's clients, the investor asserts.

That opinion prevails among ten knowledgeable institutional and family office investors that II interviewed, agreeing to anonymity so they could speak freely. All are professional manager selectors, the people responsible for finding, vetting, cajoling access to – and eventually firing – the investment visionaries who can best grow a charity's billions or secure a family's $500 million nest egg. II approached these allocators more or less at random, seeking an unbiased sample, and asked about Baupost.

Given the opportunity, would you invest in Baupost now?

Just two out of 10 said yes. And for several this wasn't a hypothetical question.

My friend Alan texted me on Tuesday night about his son, the aspiring options day trader (if only his dad would lend him the money!): "Leo is very upset with you. Amazon (AMZN) went up today, just like he knew it would."

Alan wrote: "Seriously. He was bawling!"

3) Below is an excerpt from my forthcoming book, The Rise and Fall of Kase Capital, about how I identified the top of the bitcoin and pot stock bubbles.

As the old proverb goes, when the shoeshine guy is pitching a stock to you, you know it's the peak. There's a lot of truth to that...

Consider bitcoin. In some ways, it's like a Rembrandt painting: It has value because somebody else is willing to pay something for it... But it doesn't produce any cash flow. Therefore, it's impossible to value and is, by definition, a speculation.

I had been skeptical of it all the way up, but what led me to stick my neck out and make a big call in mid-December 2017, the very hour that bitcoin peaked at $20,000, was a series of three conversations I had...

The clincher was when my friend, a former Navy SEAL, berated me, saying...

My buddies – active duty guys coming back from deployment – are taking their year-end hardship bonuses and buying bitcoin. They're making a lot of money, but you keep telling me to avoid it!

When Navy SEALs who have been fighting in Iraq, Afghanistan, and Somalia are coming home and buying bitcoin with their hardship pay... well, I just couldn't imagine that there were any remaining incremental buyers of bitcoin.

In the past week, I've been asked about bitcoin by a parade of the least-knowledgeable investors imaginable – and the only times such foolishness has happened before in my 18-year career were at the peak of the internet and housing bubbles, so I'm calling a top right now.

Blockchain technology is real in the same way that the Internet was real back in 1999 and housing prices tended to go up in the mid-2000s – in other words, a good idea taken to absurd extremes is NOT a good idea!

That said, the greed and speculative nature of humans is inherently unpredictable, so for all I know bitcoin could go to $1 million.

But I do know the ultimate outcome: smoldering rubble, a lot of finger-pointing (where were the regulators?!), and a lot of tears and empty bank accounts, especially among those who can least afford it.

At the time, bitcoin had a market cap of more than $320 billion. That was just bitcoin... not the other cryptos, like Ethereum and EOS. As you can see in this chart, over the next year, it fell all the way to nearly $3,000, incinerating untold billions of investors' dollars. 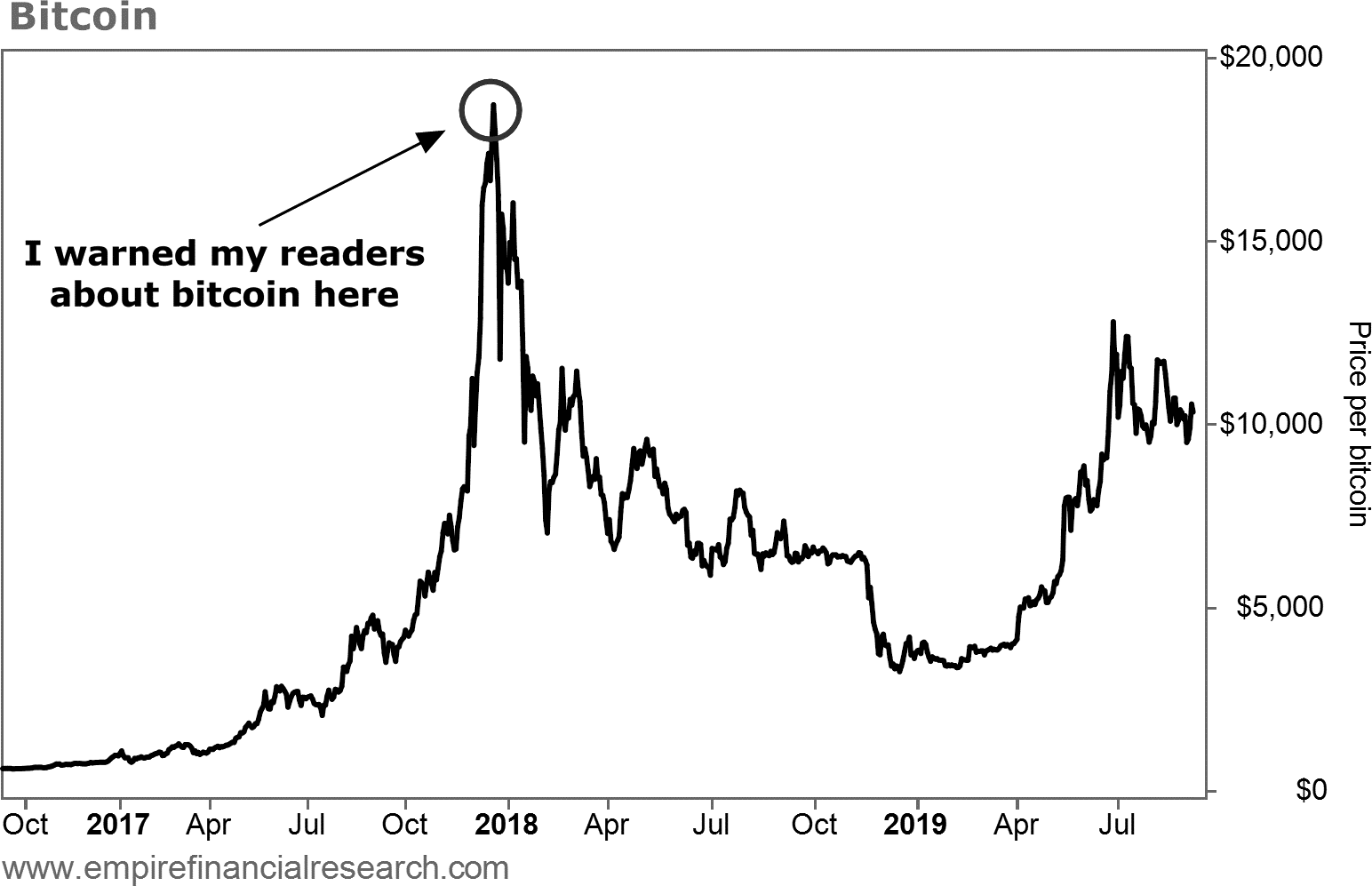 Something similar happened in the case of popular pot stock Tilray (TLRY). The marijuana sector was red-hot, and Tilray was the hottest stock in it. It had gone absolutely parabolic.

My cousin, a fireman out in eastern Washington near Yakima – who had almost no investing experience – confessed to me that he owned it.

I slapped my forehead.

"What are you doing?!" I nearly shouted at him.

At the time, I had never even heard of the company. But I did some research on it and saw that it was trading at 500 times revenues.

It was clearly a ridiculous bubble, and I said so in one of my daily e-mails.

A producer at Yahoo Finance saw it and invited me to come in for a TV interview. That very afternoon, as I was going down to Yahoo's studios, Tilray shares spiked to $300. It was trading at 1,000 times revenues and had a $30 billion market cap!

And again, there was a clincher... As I was walking from the subway into the studios, my then-19-year-old daughter, a sophomore in college, called me.

Despite years of attempts, I had never been able to interest her in the stock market. At one point, I even set up a $5,000 account for her so she could learn about investing by buying a few stocks of stores that she shopped in or services that she used. It was all to no avail...

So I had to chuckle when she said, "Daddy, I'm taking an investing class. We each have a model portfolio with $25,000 to invest. My friend told me to buy Tilray, so I did. And now it's up a lot. What should I do?"

At that point, I knew with certainty that the stock had to be near a top.

"Sell it immediately!" I said. And she did, banking a solid profit (on paper of course).

I went on television minutes later, shared this story, and concluded: "Folks, my daughter – truly the world's most clueless investor – just bought her first stock, Tilray, based on one of her friend's stock tips. I cannot think of a better sign that it's peaked."

I predicted that the stock would fall to less than $100 within a month and would be down 90% within a year. Sure enough, that's exactly what it did, as you can see in this chart (it ultimately ended up declining by more than 99%!)... 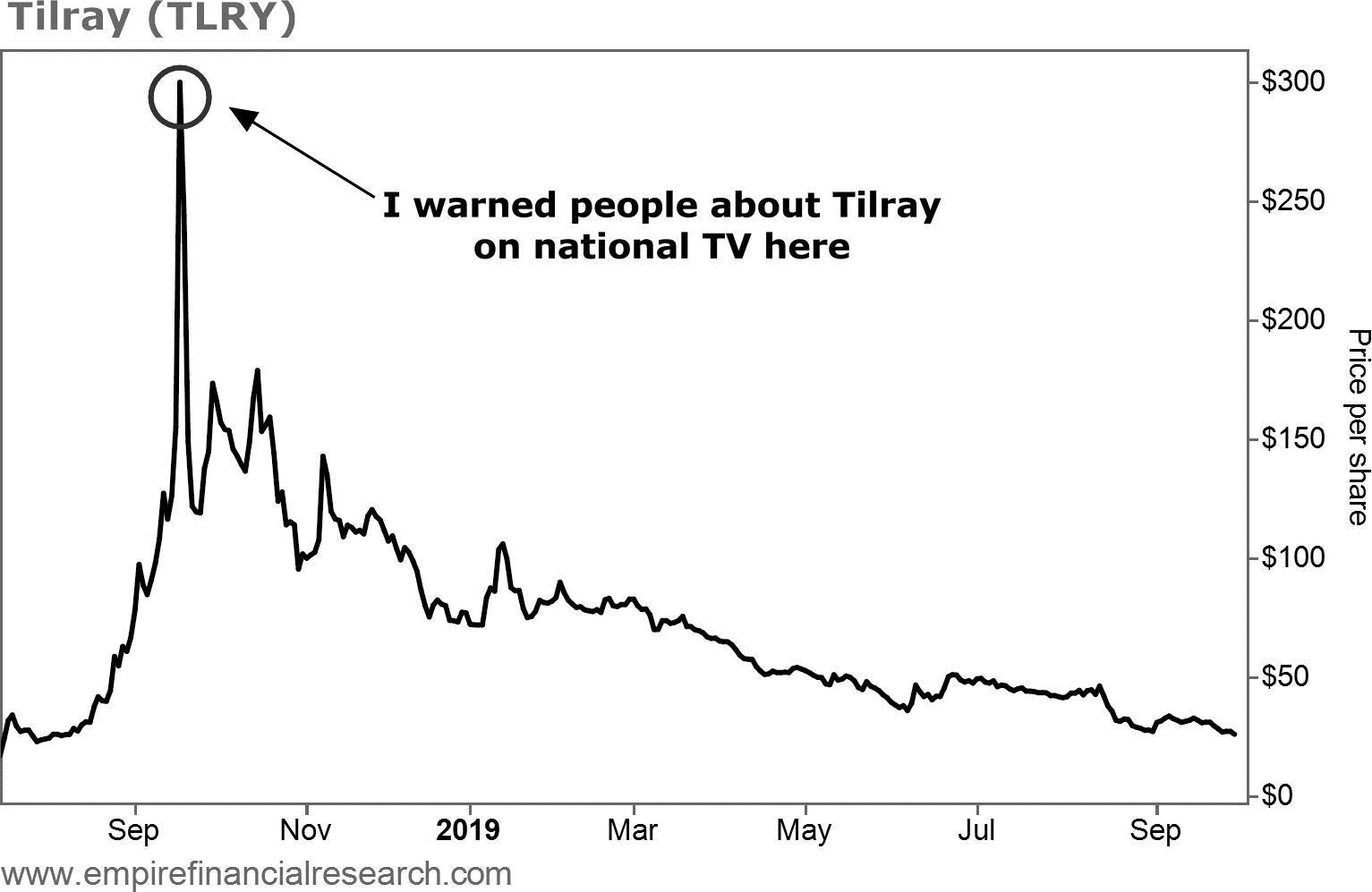 Given my success identifying the tops of certain bubbles, you might think that my advice is to buy these stocks or sectors, ride them up, and then sell (or, better yet, short) them at the top.

Not at all. I've gotten lucky a few times, but it's just too hard to do this consistently.

Rather, my advice is to simply avoid hot sectors and stocks altogether.

Look outside of what's popular. Do your own research, think independently, and look for an area of the market where you might have an edge – in the industry where you work, a company you know well, a store or restaurant that you frequent, etc. That's where you might discover something that other investors are missing.

P.S. Empire Financial Research and the market are closed on Monday for Labor Day. Look for the next Whitney Tilson's Daily e-mail on Tuesday, September 8 after the Weekly Recap. Enjoy the holiday!