More Downside Is Likely Ahead for Beyond Meat; Amazon's blowout quarter; The Case for Amazon; My new travel backpack

1) Longtime readers may recall that in my July 30 e-mail, I warned my readers that the stock of plant-based meat producer Beyond Meat (BYND) was an “obvious bubble” and predicted that it would be cut in half to less than $100 per share by the end of the year.

It didn’t take nearly that long… less than three months later, BYND shares hit my target and ultimately closed the year at $75.60. Since then, however, they’ve been on a tear and currently sit around $115.

So has the stock turned the corner, and might it be time to get back in?

To help answer that question, I turned to my friend Joel Litman, a forensic accountant who has developed a unique “Uniform Accounting” methodology for analyzing companies’ financial statements to uncover their true earnings and financial health. Joel took a look at Beyond Meat using his proprietary “Uniform Accounting” methodology, and was gracious enough to let me share his findings with you: More Downside Is Likely Ahead for This Fad Stock. Here’s his conclusion…

As competitors continue to muscle in on the plant-based burger space, it will be hard for Beyond Meat to charge large premiums for its products… which the company will need to do to justify its current valuations.

Despite Beyond Meat’s long fall, using Uniform Accounting we can understand that there is still room for market expectations to be tempered further.

Right now, Joel has a special offer – which expires at midnight tonight – to use his incredible research tool for free for the next three months. You can learn more about it right here.

2) After the close yesterday, Amazon (AMZN) reported a blowout quarter, with operating cash flow and revenue up 19% and 21%, respectively. It is truly mind-boggling that a company of this size – it generated $281 billion in revenue last year – continues to grow at this rate.

Amazon is one of the most incredible business stories of all time. In less than three decades, it has grown to be a global juggernaut that has changed the world in countless ways… So every investor and businessperson should study the company closely. As a start, I suggest reading all of the annual letters by founder and CEO Jeff Bezos, which I’ve compiled into a 76-page PDF posted here.

After highlighting some bad press the company had received, I concluded:

I think this scrutiny is healthy and mostly well-deserved – but it doesn’t change my view that the stock is attractive. As an investor, my job is to tune out the noise and focus on the fundamentals, which remain strong…

I believe that Amazon’s profits will explode over the next few years – approaching $100 per share – and thus I’m still bullish on the stock today.

I’ll be curious to see whether Berkshire Hathaway (BRK-B) – I suspect investment manager Ted Weschler made this investment – increased its Amazon stake during the fourth quarter, when the stock was weak. As of September 30, Berkshire owned 537,300 shares of Amazon, worth $1.1 billion at current prices.

3) My friend Doug Kass of Seabreeze Partners wrote an insightful article titled “The Case for Amazon” on why the stock will outperform, which I included in my September 6 e-mail. Excerpt:

In the annals of U.S. corporate history there is no company that has as large and lengthy a runway of opportunity as Amazon.com.

It is that prism of opportunity that supports my strong belief that Amazon’s earnings growth will far exceed consensus expectations in the 2019-2022 period.

Here are the keys to my increasingly bullish case:

1. Amazon’s first-mover advantage is now impenetrable; the company no longer can be caught by its competitors.

2. Amazon’s broad product offerings and technological advantages no longer can be duplicated.

3. Nor is Amazon likely to be caught by regulators. Indeed, the existential threat of more regulation and the possible imposition of growth constraints seem to be sharply diminished probabilities unless a progressive Democratic aspirant captures the White House – an increasingly unlikely event. (See my prior discussion of this.)

4. On the wings of a nearly zero cost of capital Amazon has expended enormous sums of capital to produce the massive and insurmountable competitive advantage that exists today. That “kindness of strangers” in such scale likely will never be duplicated again by a competing business entity, thus placing Amazon light years ahead of its competition. Indeed, in this marathon of disruptive growth (a marathon approximates 26.2 miles), Amazon is at least 20 miles ahead of its closest competitor.

5. Based on my company analysis, Amazon is about two years away from “hockey stick” earnings-per-share (EPS) growth that will far exceed consensus expectations. The source of my profit optimism and above-consensus growth projections are several fold, but are keyed on an expansion in operating leverage and profit margins produced by a lower rate of growth in expenses and higher top-line results. The latter will be aided by continued above-expected core retail sales gains and the anticipated success in the company’s high-margin advertising initiative as well as other emerging businesses.

6. Based on our EPS models and our more optimistic assumptions of top- and bottom-line growth, I anticipated that EPS results for 2019, 2020 and 2021 will exceed consensus forecasts by more than 10% in each of those years – and possibly considerably more! Also, 2021 is the year when the largest gain relative to expectations is projected. With more than one quarter of this year already in the rear-view mirror, it is not too early to consider results out two years.

7. The shares of Amazon have not been materially embraced and exploited relative to other peer stocks by institutional investors. As an example (and anecdotally), in my Bull/Bear debate with Tobias Lefkovich at Citigroup on Monday, the audience of large institutional investors was asked how many held the shares of Amazon. Only five out of about 30 investors answered the question affirmatively. In terms of the other three FANG constituents, Amazon has the lowest component of institutional ownership:

8. In emphasizing Amazon’s retail, emerging business and operating/financial strengths, I have not even discussed AWS cloud services, which I will save for a further discussion. It’s the icing on the cake.

Based on my company analysis, Amazon is about two years away from “hockey stick” earnings-per-share (EPS) growth that will far exceed consensus expectations. The source of my profit optimism and above-consensus growth projections are several fold, but are keyed on an expansion in operating leverage and profit margins produced by a lower rate of growth in expenses and higher top-line results. The latter will be aided by continued above-expected core retail sales gains and the anticipated success in the company’s high-margin advertising initiative as well as other emerging businesses.

Amazon’s fourth quarter revenues and EPS meaningfully exceeded investors’ expectations. Importantly, unit growth accelerated to +22% year over year compared to only +14% in the year earlier quarter (justifying the previous step up in one day shipping/fulfillment costs). AWS results were a standout, reflecting the $30 billion in performance obligations vs. $27.4 billion in 3Q2019 and $19.3 billion in 4Q2018.

Specifically, the “hockey stick” beat that I expected next year occurred this year – about 12 months ahead of expectations.

Fiscal year 2020 estimates will be dramatically raised (probably to over $43/share compared to $35-$36 previous consensus). Sell-side price targets will be increased based on what we saw 13 months ago when we first bought the shares – a boost in e-commerce operating margins as Amazon grows into its larger infrastructure, optionality for faster-than-expected free cash flow vis a vis its advertising segment and an upward bias to AWS sales forecasts and a likely more moderate deceleration path as suggested by ongoing capital intensity and rising performance obligations.

4) I travel a lot… ranging from routine two-day trips to Baltimore (to visit my corporate affiliate Stansberry Research) to adventures in far-flung corners of the world. To give you a taste of what this looks like, earlier this month I got back from two weeks in Australia over the holidays, then spent two days each in Las Vegas and Orlando at the Consumer Electronics Show and ICR Conference, with two days in Baltimore in between. On Sunday, my wife and I are flying to Kenya (which has gotten much easier with Kenya Airways’ new 15-hour nonstop flight between JFK and Nairobi) to spend a week with my parents, sister, and nephew, who live there. Two days after I’m back, I’m flying to Los Angeles for Charlie Munger’s Daily Journal (DJCO) meeting (which is open to the public – see my e-mail about it here), and then that afternoon I’ll fly straight to Fresno and drive to Yosemite National Park for five days. I’m training to climb the Nose of El Capitan later this year (if you saw the movie Free Solo, that’s what I’ll be tackling… but with a guide and ropes, and certainly not in four hours – more likely in five days).

With all of this traveling (and being a cheapskate – I hate to pay airline baggage fees), I’ve thought hard about how to pack as light as possible. I have to confess that I’ve probably taken minimalist packing to a ridiculous extreme… I shared my tips in my July 19 e-mail about how I was able to travel all over Europe for two weeks carrying only a small shoulder pack.

But that backpack was getting worn out – and when I had it stuffed full, it was quite heavy – so I decided to buy a new one this week. I was looking for a backpack that was roughly the same size (able to fit under an airline seat), had lots of pockets – including a padded one for my computer – had both shoulder straps as well as wheels and a telescoping handle so I can pull it behind me and reduce the strain on my back.

After doing some research, I bought the Matein Waterproof College Wheeled Travel Backpack. Here’s a picture of it: 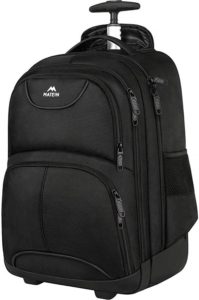 I used it for the first time this week, and it’s perfect! Even better, it’s only $69.99 (some of the other ones I looked at were two to four times this price).