Microsoft, Apple, Amazon, Alphabet, and Facebook now make up more than 21% of the S&P 500; Investors Bet Giant Companies Will Dominate After Crisis; Kudos to Gabriel Grego; Best one-line short-pitch that the world has ever seen

While I think all of these stocks will do well – in particular Amazon, Alphabet, and Facebook – I recognize that, in doing so, I'm going up against the four most dangerous words in investing: "This time is different."

You see, the last time the five largest stocks made up such a large percentage of the S&P 500 was in 1978, as you can see in this chart: 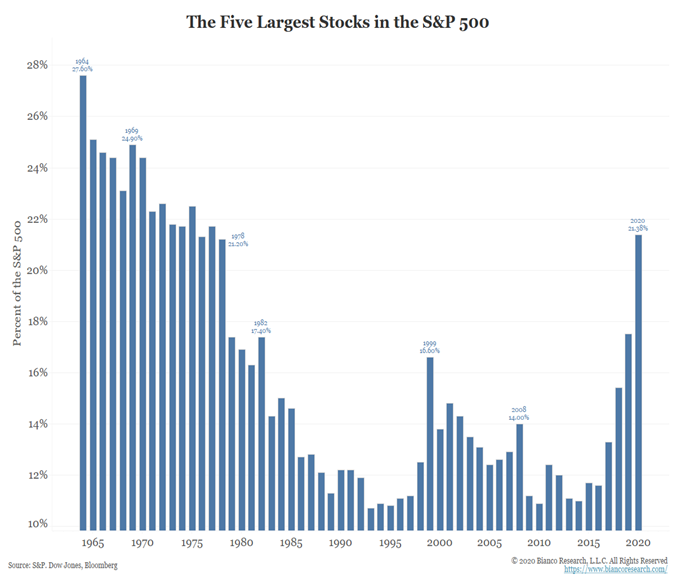 Quick: How many of those big five can you name?

All have been total value traps... with the best performer, Exxon, up less than half of the S&P 500, as you can see in this chart: 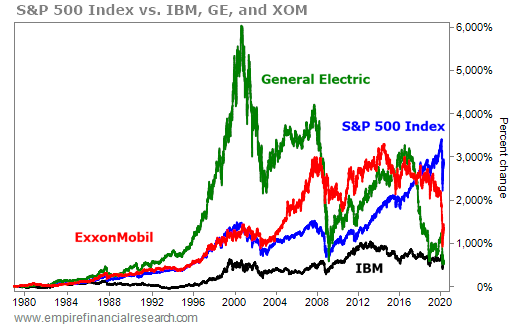 (I excluded the stock price for AT&T – it only goes back to 1983 and has underperformed by a mile since then – and GM, which of course went bankrupt during the financial crisis, has also been a dog since then.)

So will today's big five meet the same fate? I think not. They're completely different companies, with the greatest business models in history.

But I do think investors should have realistic expectations that the days of huge outperformance are over, especially for Apple and Microsoft. I favor the other three due to their substantially greater growth prospects.

"Investors are telling you that the bigger, stronger, more stable balance sheet company is going to win versus its smaller peer," said Stuart Kaiser, head of equity derivatives research at UBS.

But the depth of the current economic decline makes it reasonable to expect that such large companies will emerge in an even more dominant position this time around, said Mr. Philippon, who last year published a book, The Great Reversal, that examines the competitiveness of the American economy.

The difference in investor expectations for large and small companies is stark: The Nasdaq 100, an index of the largest technology companies – which also happen to be the largest companies in the country – is down 0.6% this year. The Russell 2000 Index, which tracks small public companies, is down 22% – roughly double the 11% in losses for the S&P 500.

That has supercharged the giants' boom.

According to data from Goldman Sachs, the top 10 stocks in the S&P 500 this month accounted for roughly 27% of the total value of the index. That surpassed the previous peak, which came during the tech stock frenzy of the late 1990s. The top five companies alone – Microsoft, Apple, Amazon, Alphabet and Facebook – account for 20% of the index.

By the end of trading on Tuesday, all but Alphabet were up more than 20% since the market hit its recent low on March 23. Alphabet, the parent company of Google, was up 17%.

Their size gives these companies a lot of heft. All five closed lower on Tuesday, which helped drag the S&P 500 down 0.5%, even though 330 of the 500 companies in the index were higher.

While the concentration of market wealth in top companies has hit a peak in recent weeks, it has been a long-term trend in recent years, reflecting, in part, changes in the structure of corporate America. The years since the 2008 financial crisis have been marked by an increase in the consolidation of some industries, such as banking and airlines.

And as bigger companies have steadily grown, they've also snagged a larger share of profits. In 1975, the biggest 100 public companies in the country took in about 49% of the earnings of all public companies. Their piece of the pie grew to 84% by 2015, according to research from Kathleen M. Kahle, a finance professor at the University of Arizona, and René M. Stulz, an economist at Ohio State University.

In my April 24 e-mail, I noted that he'd "exposed yet another likely fraud on Monday, music streaming company Akazoo (SONG)" and linked to his report.

Sure enough, Gabriel has yet again been proven 100% correct – the board fired the CEO for cause and the stock was halted, likely never to trade again. Here's an article about it: For Quintessential, a Campaign Both Short and Sweet. Excerpt:

It was a quick ending to an effective short-selling battle. On Friday, the board of Akazoo, a Nasdaq-traded music streaming company, said in a Securities and Exchange Commission filing that it had terminated the company's CEO, Apostolos Zervos, for cause and named an interim replacement.

4) Speaking of good short pitches, this was a great tweet:

(The write-up can only be accessed for 30 days by members of ValueInvestorsClub.com, but I will share it once it's available.)