1) I haven’t spoken with my friend Bill Ackman about this, so I have no particular insight, but this would be an incredible deal for his Pershing Square Tontine Holdings (PSTH) – as well as for Bloomberg.

This New York Post article mentions the interview I did with him as part of our recent SPAC webinar… Michael Bloomberg held talks to take his media empire public. Excerpt:

Michael Bloomberg has been in talks to take his media empire public through an entity controlled by billionaire Bill Ackman, [the New York Post] has learned.

If the men reach a deal, Bloomberg’s stock would trade on the New York Stock Exchange in place of Ackman’s Pershing Square Tontine Holdings, a blank-check company that’s raised $5 billion to buy or merge with another company that would then take its stock listing.

It’s unclear whether Bloomberg will move forward with a partial sale, but the billionaire – worth an estimated $55 billion, according to Forbes – has spoken about the plan directly with Ackman, sources said…

Ackman, who declined to comment through a spokesman, discussed the possibility of taking a minority stake in a larger company earlier this month as a way to invest the billions he’s raised in his special-purpose acquisition company, or SPAC.

In an interview with fellow hedge fund manager Whitney Tilson, Ackman reiterated his plans to target an entity valued between $10 billion and $15 billion, and said using that money to buy a minority stake in a far larger company could win his investors a better price…

“He’s has wanted Bloomberg from the start,” said one Wall Streeter with knowledge of the talks. “He took a run at Airbnb, but Bloomberg was always at the top of his list and the deal makes sense. He loves Mike and it’s a huge win for him”…

For Ackman, a merger with Bloomberg would be a huge win for his investors – giving them stakes in a major media company for $24 a share, which is what they paid for stock in the shell entity. It would also help cement Ackman’s transition from hedge fund manager to tycoon investor.

“If he gets Bloomberg, that’s his masterpiece” a rival hedge fund manager mused. “Even getting 15% of that company makes his SPAC the biggest success yet, and he can raise another $5 billion one the next day.”

2) With the election less than two weeks away and Democrats favored to win the Presidency and both houses of Congress, investors need to think carefully, critically, and unemotionally about the implications for the economy and the stock markets.

President Donald Trump says that the Democrats’ economic and tax policies would destroy the economy and plunge the stock market into an abyss, but even conservative economic think tanks disagree. The American Enterprise Institute recently published this report: An Analysis of Joe Biden’s Tax Proposals.

The analysis concludes Biden’s plan would raise $2.8 trillion over the next decade from higher taxes on businesses, corporations and the wealthiest households. Over that time, AEI projects the higher taxes would reduce economic growth by a relatively modest 0.16%.

The plan would “make the tax code more progressive,” AEI’s Kyle Pomerlau and Grant Seiter write. And after slightly crimping growth in its first decade, it would “reduce debt-to-GDP in the second decade, leading to slightly higher GDP. However, in the long term, his plan would not raise enough to stabilize debt-to-GDP and would lead to a 0.18% smaller economy.”

The macroeconomic drag the AEI model anticipates roughly aligns with other analyses from the Tax Foundation and the Penn Wharton Budget Model, Pomerlau notes. In other words, rolling back most of the Trump tax cuts wouldn’t bring about the economic Armageddon the Trump campaign has depicted.

3) I agree with this New York Times review of Apple’s (AAPL) newest phone: Apple iPhone 12 Review: Superfast Speed, If You Can Find It. Excerpt:

When Apple provided the New York Times with iPhone 12s to test on Verizon’s 5G network, I quickly discovered that my neighborhood in the San Francisco Bay Area didn’t have any 5G connection. So I went on a journey through San Francisco to find the superfast data speeds that Apple and Verizon executives promised when they unveiled the new iPhones last week.

When I found places where I could connect to the fastest 5G networks, the iPhone experience was hugely gratifying. The network delivered download speeds to the phone that were up to seven times as fast as the best broadband services I have ever used.

But the locations where I tracked down ultrafast 5G were far less satisfying. At one point, I found the speedy connection in the back of a Safeway parking lot. Another time I was in front of a Pet Food Express. What would I do with an incredibly fast internet connection there?

In most parts of San Francisco, the iPhone instead drew data from a more vanilla flavor of 5G that Verizon calls “5G Nationwide,” which is the connection that most of the country will get for the foreseeable future. Those download speeds ranged from much slower than to twice as fast as my older iPhone, which was on Verizon’s 4G network.

That’s all to say that despite the hype around 5G, the network underwhelmed. At this point, it should not be the primary reason to splurge on an expensive handset in a pandemic-induced recession.

I have the Samsung Galaxy Note 10+ 5G, and I’d estimate that I get 5G speeds – which are indeed blazing (up to 25 times faster than 4G in my tests!) – less than 1% of the time. I’m glad it has the capability, as eventually Verizon (VZ) will build out its 5G network, but the coverage is truly pathetic right now…

4) Yesterday my guide Paul and I did “cragging” (see description below) for the first time in the Calico Hills, which are part of the Red Rock Canyon National Conservation Area on the outskirts of Las Vegas – you can see the reddish Hills in the right side of this picture:

Here’s the first area we climbed:

And here’s a super close-up of the exact place, called Panty Wall (yes, it’s mostly young men who name the climbing areas/routes!) – you can see some climbers on it:

After I did four warm-up pitches of increasing difficulty (5.7 to 5.10a) over a couple of hours, we moved to another cragging area called The Black Corridor, which you can see behind me in this picture: 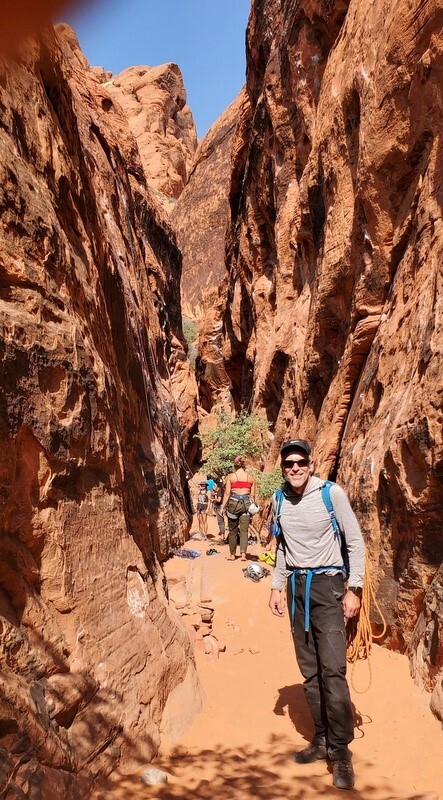 Having never previously completed any route above 5.10a, I knew I wasn’t going to be able to complete the 5.11a on my first try. But I actually came very close, so Paul lowered me down to the part with the “crux” (most difficult) move, and I tried it again and again until I got it. Then he lowered me to the ground, and after another couple of tries, I finally completed the entire route, which I’m celebrating here: 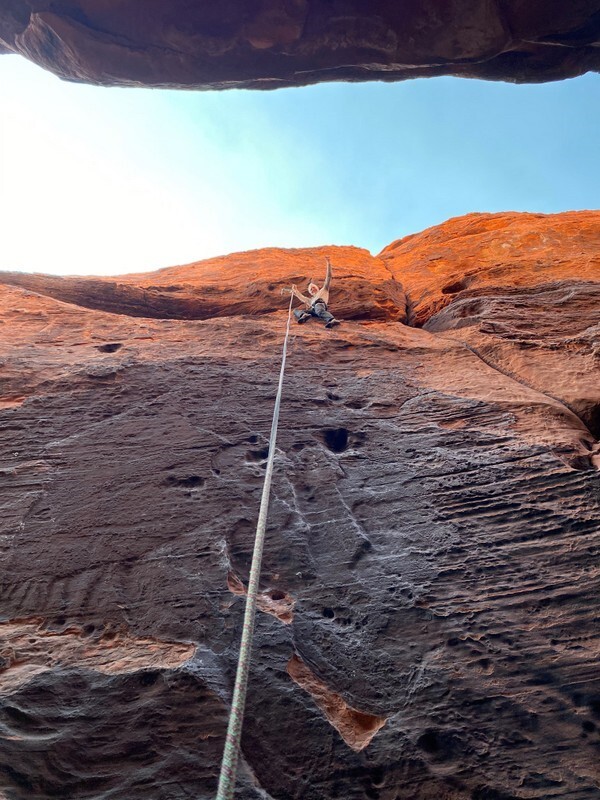 P.S. Cragging is what most climbers do most of the time – it means climbing single-pitch routes, belayed with a top rope. So, Paul climbed the route, with me belaying him from below, as we always do. Then, when he got to the top of the pitch, he looped the rope through a bolted anchor and I lowered him down using my belay device (called a GriGri). With the top rope now in place, Paul belayed me as many times as I wanted to climb the route.

In contrast, what Paul and I have been doing the previous seven days of this trip (as well as my entire trip in June/July) is called “multi-pitch climbing,” in which we’re doing routes that are hundreds – sometimes even thousands – of feet long. When we’re doing this, when Paul reaches the top of the first pitch, he clips into the anchor and belays me from above. Then, when I reach the anchor next to him, I clip in, give him the gear that he placed (which I “cleaned” and put on my harness), put him on belay again, and he climbs the next pitch. Lather, rinse, repeat… and a few hours later, we’re at the top (and either walk off or rappel down).