In yesterday's e-mail, I discussed one of the two areas of high spending about which investors are concerned: the metaverse.

Today, I'd like to discuss the other: capital expenditures ("capex"). As you can see in the chart below, Meta's capex has soared: 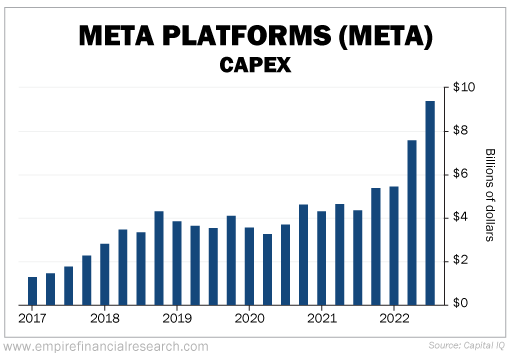 For many years, Meta's capex grew in line with rapidly rising revenues, then it roughly flatlined from mid-2018 for the next three years (which was great news), but it soared in the past year... especially in the third quarter, when capex was $9.4 billion – up a massive 117% year over year ("YOY").

This, combined with the drop in cash flow from operations, led to free cash flow of only $173 million in the third quarter, down 98% from $9.5 billion YOY.

Capex is going to remain high at least through next year based on the guidance in the company's third-quarter earnings release:

Investors are rightly wondering what's going on here. Has one of the greatest cash-generating businesses of all time ceased to become one? Is Meta wasting tens of billions of dollars?

In its earnings release, Meta gave this somewhat cryptic explanation for the huge increase in capex:

An increase in [artificial intelligence] capacity is driving substantially all of our capital expenditure growth in 2023.

Why is Meta suddenly spending so much money on artificial intelligence ("AI") capacity?

The answer, I believe, is that the company is responding to two huge body blows: first, TikTok came out of nowhere to suddenly become a massive challenger, as this insightful, in-depth Washington Post article documents: How TikTok ate the Internet. Here are the highlights:

This chart shows TikTok's extraordinary growth over the past four years: 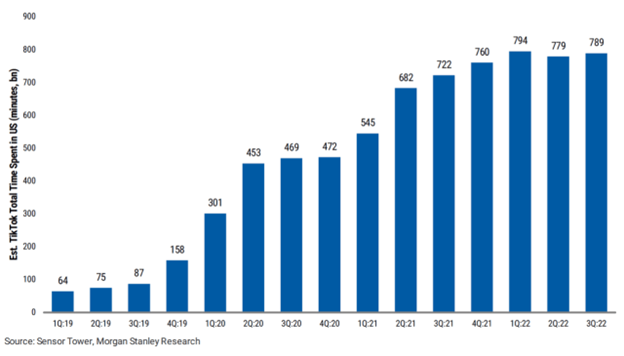 The second body blow Meta suffered began in April 2021 when Apple (AAPL) rolled out privacy changes, called App Tracking Transparency ("ATT"), that hurt Meta's ability to target users and monetize them. Meta has admitted that this has impacted revenue to the tune of $10 billion this year... And an independent study puts the figure even higher, at $12.8 billion.

Clearly, Meta needed to invest to adapt to these challenges and mitigate the damage – and claims to be having some success. Here's what CEO Mark Zuckerberg said on the latest earnings call:

Our AI discovery engine is playing an increasingly important role across our products – especially as advances enable us to recommend more interesting content from across our networks in feeds that used to be primarily driven just by the people and accounts you follow. This of course includes Reels, which continues to grow quickly across our apps – both in production and consumption. There are now more than 140 billion Reels plays across Facebook and Instagram each day. That's a 50% increase from six months ago. Reels is incremental to time spent on our apps. The trends look good here, and we believe that we're gaining time spent share on competitors like TikTok.

A friend who knows Meta well (he invested in the company when it was still private) added:

They are dealing with TikTok and are far along with solutions to the Apple ad problem. They just need to build the underlying processing power to make this work – hence the seemingly out-of-control investment. It's a shame that they suck at communicating this.

If you can stomach the stock's volatility, I would sell my kids to buy it. The fundamentals are still very strong and the strategic threats are diminishing.

TikTok will remain a formidable competitor (unless it's suddenly banned, which I don't think is likely, but it's possible – see: FCC commissioner says government should ban TikTok), but as you can see from the chart above, its growth has flatlined over the past year... while Meta's Reels competitor has seen a 50% increase in plays over the past six months.

Similarly, while Apple's privacy changes have severely impacted Meta's financials over the past year, going forward the YOY comparisons will get much easier.

On Monday, I'll wrap up my discussion of Meta and summarize the bull case, so stay tuned!

2) During the 15 years I was an active (and activist) short seller when I was managing hedge funds, one of the most accurate warning flags I looked for was when a company threatened litigation or complaints to regulators – generally along the lines of "evil, nefarious short sellers are knowingly spreading lies about our company to profit from the resulting decline in our stock price."

The lawsuit alleges: "Defendants placed personal enrichment over science, over the health of patients, and over the truth. Defendants saw an opportunity to manipulate a stock price and financially benefit from their 'short positions' by defaming a company developing a drug for people with Alzheimer's disease, a condition that afflicts millions of people. Defendants seized that opportunity and, while enriching themselves, caused irreparable harm to the company, its attempts to find a treatment for the disease, and patients waiting for that treatment. Defendants' conduct is beyond shameful. It is unlawful."

The complaint identifies over 1,000 false and defamatory statements made by the Defendants in submissions to the U.S. Food and Drug Administration as well as "reports" and presentations that Defendants published online or on social media. According to the complaint, "Defendants saturated the market, investors, federal agencies, testing sites, and others with their false and defamatory message about Cassava. Defendants did not have any real or valid concerns with Cassava, its foundational science, or its tests. Defendants engaged in their saturation campaign to profit based on a decline in Cassava's stock price."

I checked in with my friend, activist short seller Gabriel Grego of Quintessential Capital Management, who published a 38-page report a year ago on Cassava Sciences (which you can read here) and is one of the subjects of this lawsuit. He told me:

We stand behind everything we wrote. This is one of the most frivolous lawsuits I've ever seen, and I expect it will be quickly dismissed. If it's not, we look forward to getting discovery on the company.

In my experience, in almost every case, a lawsuit like this was a sure sign of a guilty company trying to silence legitimate critics.

And in the handful of cases in which I was the activist, I always hoped they would sue me because a) I had nothing to hide... and b) I would get discovery on them, since the best defense against defamation is the truth (and I was certain the companies were lying).

I'm sure Gabriel is licking his chops at the opportunity to see all internal documents and communications at Cassava Sciences!

3) Everyone likes to knock ultra-low-cost carrier Spirit Airlines (SAVE), but the handful of times I've flown it, I've always saved a ton of money and had a pleasant experience...

Perhaps this underscores the truth of what Warren Buffett once said was the key to a happy marriage: low expectations going in!

I paid $155 to fly nonstop one-way from Newark to Las Vegas on Monday – less than half of what any other airline was charging.

But you need to know that, at the prices Spirit charges, you're going to pay extra for just about everything: a seat assignment, any bag that doesn't fit in the seat in front of you, and snacks and drinks (even water). Plus there's no entertainment system, Wi-Fi, or outlets to charge your electronics. (As I was boarding the plane, I heard one guy say to the flight attendant: "Are you going to give me a refund because there's no Wi-Fi?" and had to restrain myself from saying, "Dude, are you kidding? You're flying Spirit!")

The flight was on time, the plane seemed new, and one of my two tricks for flying ultra-low-cost carriers (or Basic Economy on the mainstream carriers) worked, so I have no complaints.

My first trick, to save the $65 charge for a cabin bag that goes in the overhead compartment, is to pack super light so everything fits in my favorite roller bag ($80 on Amazon here): 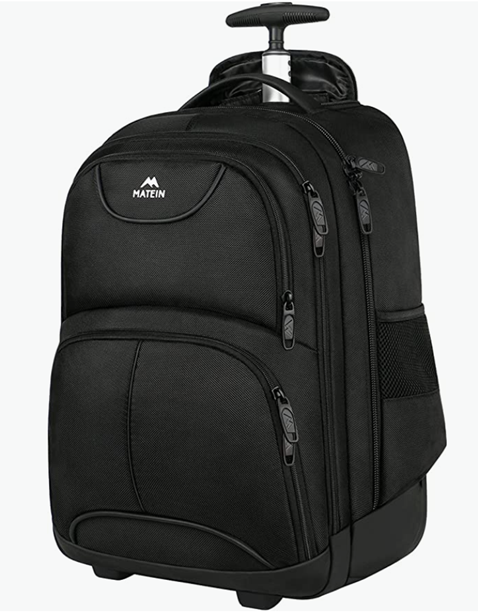 I had all of my climbing gear in it, so it was overstuffed and wouldn't fit under the seat, but to make sure the gate agents didn't flag this, I pulled out the straps and put it over my shoulder, so it just looked like a backpack. Then once I was on the plane, I stuffed the straps away and put it in the overhead bin.

My other trick – not to pay for an assigned seat, but still avoid the dreaded middle seat – didn't work, however. When I went to check in on the app the day before my flight, this is what I saw: 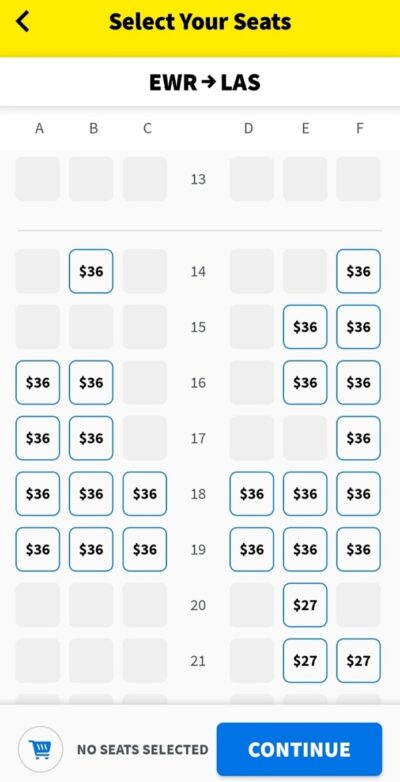 So I wasn't worried when Spirit assigned me seat 20E when I checked in without paying for an assigned seat...

But when I boarded the flight, my plan was foiled – there wasn't a single empty seat on the plane!

Had you told me that I'd be stuck in a middle seat on Spirit on a five-hour flight, I would have expected it to be a miserable experience... but to my surprise it ended up being fine. There was no room to open up my laptop and get work done, but I was just as happy to read and watch a few videos on my phone...