Meta's massive spending on the metaverse; The Prince: Searching for Xi Jinping; A Cancer Trial's Unexpected Result: Remission in Every Patient; Get Global Entry

In yesterday's e-mail, I highlighted the single biggest issue among many facing Meta, whose stock has collapsed by 76% in little over a year: slowing revenue growth.

Today and tomorrow, I'd like to discuss the second biggest issue, rapidly rising spending, in two areas in particular: the metaverse (today) and capital expenditures (tomorrow).

Regarding the former, Meta founder and CEO Mark Zuckerberg became convinced a few years ago that the metaverse – an augmented/virtual reality world – was the next big thing in technology and was determined to make his company the leader. Reflecting this conviction, Zuckerberg even changed the company's name from Facebook to Meta Platforms last year.

Since 2019, the company has spent a staggering $37 billion developing the metaverse (via a segment it calls "Reality Labs") and has little to show for it, with a mere $5.3 billion in total revenue – resulting in cumulative operating losses totaling $30.7 billion, as this chart shows: 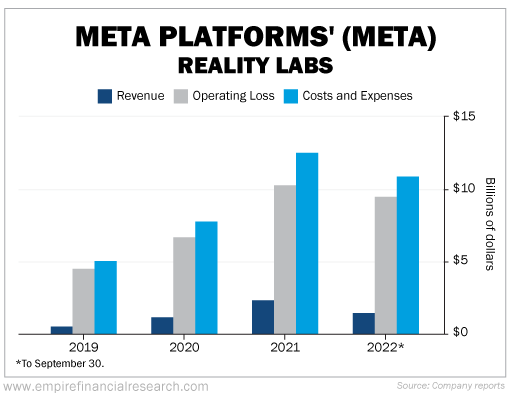 In the third quarter, with revenue down and operating profit from Meta's core business down 28% from $13.1 billion to $9.3 billion year over year ("YOY"), results from the Reality Labs segment poured more salt in investors' wounds, with revenues down 49% from $558 million to $285 million, yet losses were up 40% from $2.6 billion to $3.7 billion. As a result, total operating income for the company was down 46% YOY.

Investors are furious at Zuckerberg for what they see as wildly excessive spending in an unproven area, but he's digging in his heels – in the company's latest earnings release, it announced that:

We do anticipate that Reality Labs operating losses in 2023 will grow significantly year over year. Beyond 2023, we expect to pace Reality Labs investments such that we can achieve our goal of growing overall company operating income in the long run.

In other words, he's telling investors to jump in a lake. And with Zuckerberg's control entrenched via Meta's dual-class share structure, there's nothing they can do other than sell the stock... which is exactly what they're doing.

So why, when everyone else is running away from what appears to be a dreadful dumpster fire, am I running toward it?

First, because I'm not willing to write off all of Meta's metaverse investment as a total waste. Zuckerberg knows a lot more about it than I do and I have no reason to believe he's irrational or stupid, so I'm open to the idea that tens of billions of dollars in spending in this area will create some valuable technologies. Here's an insightful 16-minute video by a reviewer about this: Who Cares About the Metaverse?

Second, it's important to keep in mind that Meta's spending in this area is purely discretionary. At any time, Zuckerberg can decide to scale it back. I don't think this is likely – at least not in the next year – but it's possible, and it would be a big catalyst for the stock.

2) Earlier this week, I sent this to my China e-mail list (if you wish to subscribe to it – roughly two to three e-mails per week – simply send a blank e-mail to: [email protected])...

I just finished listening to this nine-segment podcast, The Prince: Searching for Xi Jinping, by The Economist about China's leader (whose name is pronounced "C" not "She," by the way). They argue, correctly I think, that he is the most powerful person in the world. It's very well done... Excerpt:

Hosted by The Economist's China correspondent Sue-Lin Wong, The Prince podcast traces the lessons the young Xi Jinping learned from his traumatic childhood and his rise during China's boom years. The result is a compelling picture of what he learned about power and how to wield it. Ms. Wong talks to people who shared Xi's background, people affected by the way he changed China, and top officials who have seen him up close. Over the past ten years, Xi Jinping has gathered enormous personal power. Now, the future of China's 1.4 billion people – and maybe world peace – hinges on the mind of this one man.

Each 40-minute episode tackles a different theme surrounding Xi, and seeks to find the answers to questions surrounding the leader including: Why did Xi retain such faith in the Communist Party even as bitter struggles tore apart his childhood? What lessons did he learn from the collapse of the Soviet Union? How did he rise through the ranks to take control of a regime on the brink of collapse? How did he build the world's most sophisticated surveillance and censorship machine? How is he exporting the brutal lessons he has learned about power politics to the rest of the world?

3) I shared the story of my colonoscopy (and reader feedback) to a) raise awareness about the second-deadliest form of cancer, trailing only lung cancer... and b) encourage others to get screened because if the cancer is detected early, it's generally not fatal.

So I read this article in the New York Times with great interest – it's extraordinary news! A Cancer Trial's Unexpected Result: Remission in Every Patient. Excerpt:

It was a small trial, just 18 rectal cancer patients, every one of whom took the same drug.

But the results were astonishing. The cancer vanished in every single patient, undetectable by physical exam, endoscopy, PET scans, or M.R.I. scans.

Dr. Luis A. Diaz Jr. of Memorial Sloan Kettering Cancer Center, an author of a paper published Sunday in the New England Journal of Medicine describing the results, which were sponsored by the drug company GlaxoSmithKline, said he knew of no other study in which a treatment completely obliterated a cancer in every patient.

"I believe this is the first time this has happened in the history of cancer," Dr. Diaz said.

4) I got another reminder of why TSA PreCheck is a must-have when I went through security at Newark airport on Monday...

There was a 20-minute wait in the regular line and not a single person in my line, as you can see in these pictures I took: 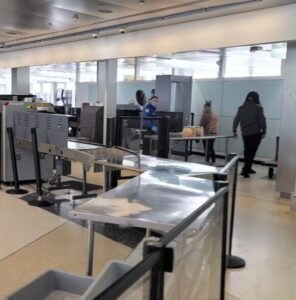 The best way to get TSA PreCheck is to sign up for Global Entry because you get the added benefit of sailing through immigration (where the line can sometimes be an hour or more) when you come back to the U.S. from overseas. You can sign up for it here.