Lyft, Alphabet, and Apple earnings; Enrique Abeyta on the sell-off among global 'winners'

1) Ride-sharing company Lyft (LYFT) reported earnings after the close yesterday. I thought they were decent, but the market disagrees, as the stock fell 5% this morning.

Revenue rose 63%, losses declined, and – critically – operating cash flow was positive for the second consecutive quarter (albeit slightly, at $10 million). Guidance for the fourth quarter was similar: revenue growth of 46% to 47% and further reduced losses.

Lyft’s earnings report underscores why I think competitor Uber (UBER) is a much better short. Lyft is a smaller, more focused business, whereas Uber is huge and wildly overdiversified. As a result, Uber is burning enormous – and accelerating – amounts of cash, as you can see in this chart: 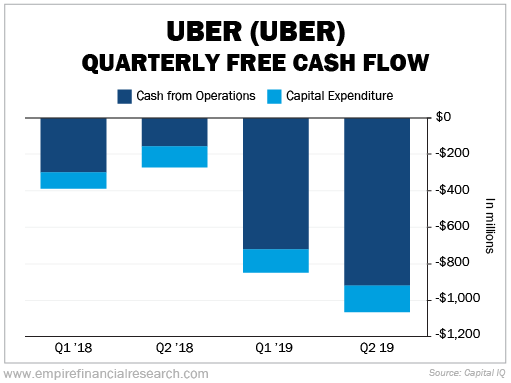 I predict more of the same when Uber reports third-quarter earnings on Monday.

While Lyft’s stock will likely do far better than Uber’s going forward, I don’t think it’s a good long bet. Both companies have terrible business models, as evidenced by the fact that, in a quarter in which revenue grew 63%, Lyft’s “cost of revenue” rose 80% and all other operating expenses were up 63%. In short, I can find no evidence of the type of “scaling” investors like to see…

In addition, both companies face tremendous regulatory and legislative risks, most ominously the law just passed in California, which accounts for 17% of Uber’s rides globally. It’s scheduled to take effect on January 1 and requires that Uber, Lyft, and many other “gig economy” companies classify their drivers as employees, not independent contractors.

Uber and Lyft claim that the law doesn’t apply to them, but this is absurd: the law was specifically directed toward them. When it goes into effect, it could increase driver costs by 30%, which would deepen the companies’ already-large losses.

They’re both insanely great, dominant, cash-gushing companies, but there’s one huge difference: Alphabet is still growing revenues north of 20%, year after year, whereas Apple’s top-line growth stalled out in 2015.

In its most recent quarter, Apple’s revenues grew a paltry 1.8% and operating income declined 3.1%, continuing a long trend. The company has been able to keep earnings per share growing at a decent clip thanks to the largest share-repurchase program of all time, but I view this as the lowest-quality type of growth. On Twitter, financial writer Charlie Bilello posted an interesting chart (which our in-house design team recreated) showing how much Apple has spent on repurchases and the resulting decline in shares outstanding… 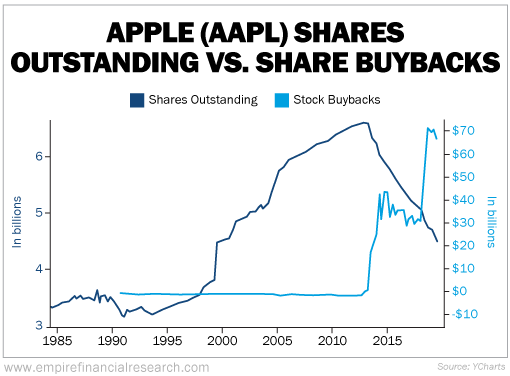 In summary, though I’ve been wrong so far, I continue to believe that Alphabet’s stock will outperform Apple’s going forward for reasons I initially laid out in an article I published in July 2018, Why I like Alphabet more than Apple — and Buffett doesn’t, and updated in my May 1 e-mail.

As I’ve been looking at the stocks in the S&P 500 over the last few weeks, a clear pattern has emerged: The big global “winners” are taking a breather and experiencing a mini-correction. 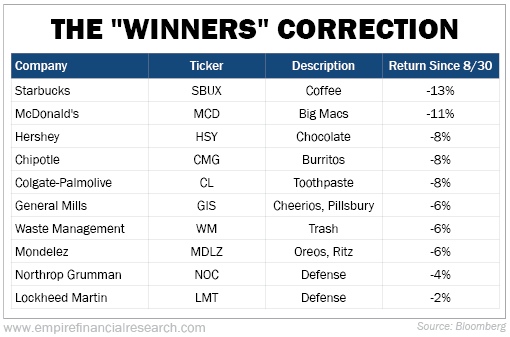 These are large-cap companies with well-recognized global brands and a long track record of strong performance in the market. They’re also all stable and/or defensive businesses in a variety of industries.

On average, these stocks were up 45% year-to-date through the end of August. Those are amazing returns for companies with an average market cap of almost $70 billion.

Since then, though, they’re down 7% on average.

A few have hit speedbumps, such as McDonald’s (MCD) and Hershey (HSY), both of which recently had some “noise” around earnings guidance. But for the most part, these stocks are down on little to no news.

What does this tell us? Is it an indication that the end of the bull market is upon us?

Nope! In fact, this is good news for stocks. You see, the sign of a strong and sustainable move higher in the market is breadth: the more stocks that are heading higher, the better.

And though the winners are taking a breather, as I told Empire Elite Trader readers last week, the laggards have started to catch up. In fact, from late July through late October, the difference between the 50 best- and 50 worst-performing stocks in the S&P 500 was just four percentage points. This is proof of a healthy market.

The other takeaway for investors is that this is a great opportunity to buy high-quality stocks that have gone on sale… and we recommended shares of our favorite on the list above in yesterday’s issue of Empire Elite Trader.