Lessons from my bullish call in May; Inflation is falling rapidly; I discussed the environment on Joshua Spodek's podcasts

1) I caught quite a bit of flak from my readers – and even my own team at Empire – when I turned bullish on stocks, especially beaten-down growth stocks, in May.

I do think it's time to start looking to buy high-quality growth businesses whose stocks have been oversold by panicky retail investors and hedge funds being forced to liquidate (I think it's likely we'll soon be hearing a lot about the latter).

I don't share many stock ideas in my free daily, but I did share one that day, writing: "One company that may fit this description is digital payments giant PayPal (PYPL)..." and including a link to an impressive stock pitch on the company by Columbia Business School students.

The wild, mostly downward swings in the markets this year have spooked a lot of investors, but I continue to view the turmoil as good news.

I'm glad I put a good chunk of my cash to work over the past week. As I've argued in my recent dailies, it smells like a bottom, but in truth I don't really know (or care).

Like the vast majority of Americans, I'm still in my working years, so I won't need to touch the money I'm investing for many years – even decades.

Thus, the 17.1% decline this year in the S&P 500 Index and 25.5% drop in the Nasdaq simply means that I'm able to buy more shares of high-quality businesses than I was a few months ago. That's great news!

It turns out that I was roughly a month too early... So, until the markets bottomed in mid-June, my critics took their shots, but I didn't waver. On July 1, I predicted a strong second half to the year:

I'm actually pretty bullish, for reasons my friend Doug Kass of Seabreeze Partners laid out in my e-mail on Monday. In particular, look at this table he presented – it shows that the five prior times since 1928 that the market had a similar or worse first half of the year, it generated strong returns in the second half of the year every time:

In that same e-mail, I shared another stock idea:

I'm also bullish on Twitter (TWTR) because, as I discussed in two recent e-mails, I think Elon Musk is likely to go through with his purchase of the company at or near the agreed-upon price of $54.20.

In less than six weeks since then, Twitter is up 16%.

There are two big lessons here...

And when it comes to stock ideas, I'm still bullish on the cannabis sector despite the beating it has taken in 2022.

Specifically, I've found one stock that I expect to soar for years to come... and it could deliver a 300% gain even before cannabis legalization occurs at the federal level. I put together a brand-new presentation about this opportunity – watch it right here.

2) One of the main reasons I turned bullish – other than terrible market sentiment resulting in beaten-down stocks – is that I believed inflation had peaked and would decline sharply by the end of the year.

I didn't expect that inflation would get as bad as it did and, as with my market call, I was a couple of months early in nailing the turn.

But after yesterday's inflation report (and dozens of other indicators – for example, Gas Prices in the U.S. Fall Below $4 a Gallon), it's clear that inflation is on its way down. Here's a summary in the Wall Street Journal: U.S. Inflation Eased Slightly in July. While the headline number is still a shocking 8.5% year-over-year increase, only a slight decline from the previous month's 40-year high of 9.1%, this is the key part of the report:

Monthly, the CPI was flat in July after rising for 25 consecutive months, the result of falling energy prices such as gasoline. Core CPI, which excludes often-volatile energy and food prices, eased to 0.3% last month, down sharply from June's 0.7% gain.

Investors now expect that the Fed may soon ease up on raising interest rates, which is leading them to buy stocks, especially growth stocks, like crazy (see this WSJ article: Tech Stocks Are Back in the Market's Driver's Seat).

In fact, after yesterday's 2.9% rally, the tech-heavy Nasdaq is now officially in a bull market after rallying more than 20% from its recent lows. Here's the WSJ with the story and a chart: The Nasdaq Composite Is Back in a Bull Market. Excerpt:

The Nasdaq Composite is officially in a new bull market.

The technology-focused index rose 2.9% Wednesday, reflecting a rise of more than 20% from its low in mid-June. It climbed with other major indexes after a softer-than-expected inflation reading raised investors' hopes that the Federal Reserve may soon moderate the pace of its campaign of interest-rate increases.

The recent rise in the Nasdaq ended its longest bear market since 2008 in the depths of the financial crisis. It is still down 18% this year and was off 32% at its low on June 16.

Stocks have rallied in the past month after posting one of their worst first-half performances in decades, reflecting a popular bet on Wall Street that cooling inflation will permit the central bank to take a more supportive stance toward markets. 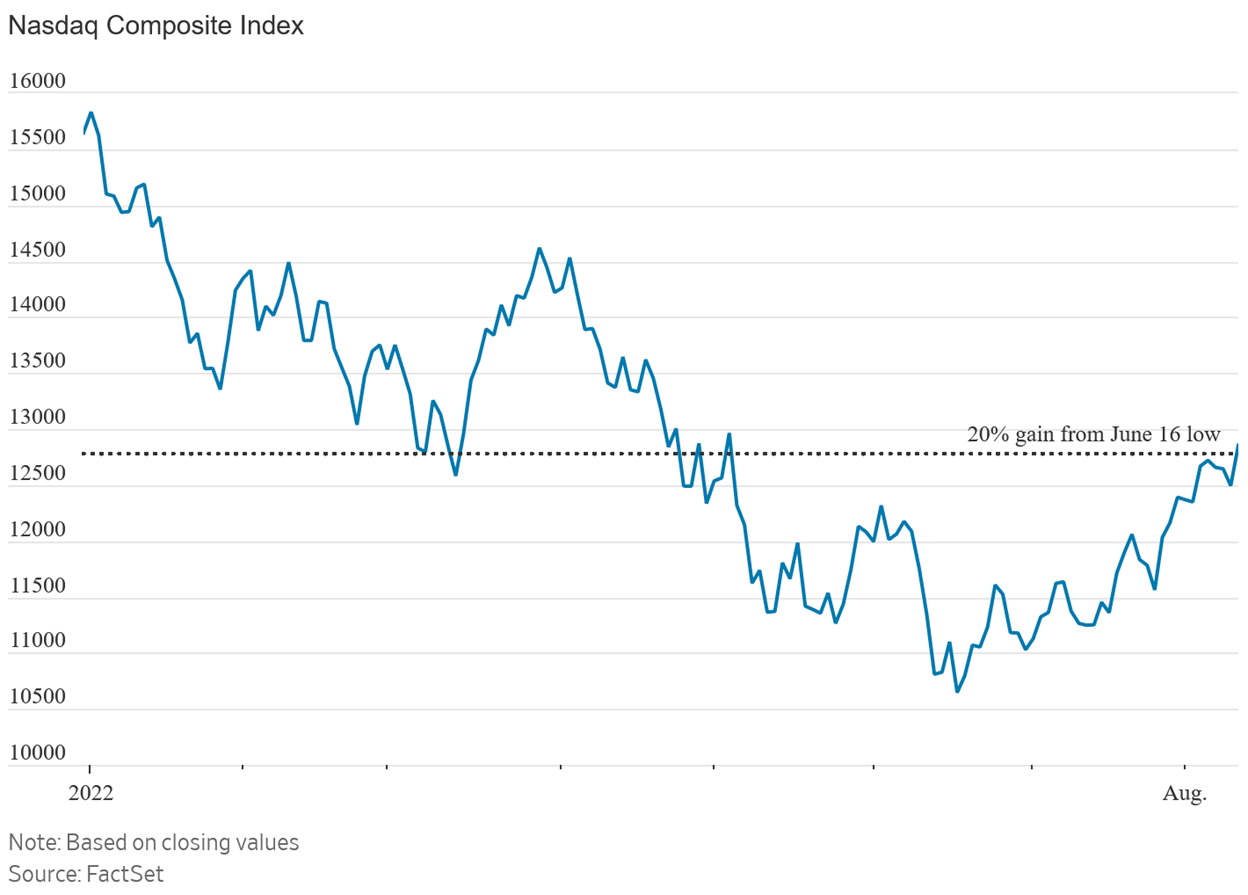 To summarize, I think the current trends are likely to continue... But after the sharp run-up in stocks over the past two months, I recently added the word "moderately" to my forecast. This was my conclusion in my August 2 e-mail, when I explained why I'm moderately bullish:

In summary, while I'm not pounding the table, I'm moderately bullish for at least the rest of this year.

Yes, the economy is slowing, but to the extent there is a recession, I expect it to be mild and short, which is already reflected in lower stock prices pretty much across the board this year. And there are many offsetting positive trends, which should result in decent – perhaps even better than decent – returns from here.

3) I had two wide-ranging (102- and 86-minute) conversations in June and July with author, professor, and environmental activist Joshua Spodek on his This Sustainable Life podcast.

Spodek is a fascinating individual – among other things, he's the only other person I know who picks up trash every day when he's out walking near his home. You can listen to the conversations here (I suggest at 2 times speed).

Here's the summary of our first conversation:

Whitney's background and accomplishments are incredible and we start with them. He shares his beliefs and mindsets that lead to his high performance in business, philanthropy, fitness, family, and more.

Then we share a fun part of how I invited him to this podcast. After he, in a friendly, helpful way, cursed at some of his newsletter readers in criticizing their behavior during the pandemic, I cursed at him in the same friendly, helpful way. The email got his attention. It led to us meeting in person to pick up litter in Washington Square Park (where he saw his first drug deal in the corner with the syringe drug users), then to recording in person at my apartment.

When we spoke on the environment, I heard a common mix: he connected deeply with it, including majestic experiences at some of Earth's most extreme environments, and he also felt about its problems that he couldn't do anything meaningful.

My favorite part of my conversation with Whitney was how he put up nearly every form of delay, resistance, and obstacle any other guest has responded to my invitation to act on his environmental values. I believe we were both patient, listened, spoke to be understood. After he found something to act on, you'll hear the change in his perspective on acting on intrinsic motivation versus what sounded to me like trying to save the world, or feeling you have to, but disconnected from intrinsic motivation.

And here's the summary of our second:

We start by my reading the emails where I invited Whitney to this podcast by cursing with a few f-bombs, showing how we started our interactions. Before recording our first episode we met in Washington Square Park and picked up litter together.

(Read my emails cursing at Whitney Tilson that brought him to my podcast.)

Whitney shares how he created and maintains his following, speaking his mind, deliberately sharing provocative opinions. He shares how and why he engaged so much on the pandemic. I see that passion raising the potential for him to engage on sustainability, but we'll see. He became as knowledgeable as anyone I know and led a large number of people on it.

Then we talked about carbon offsets. I shared my Two Carbon Cycle Explanation, though I've since simplified it in The simple explanation why offsets don't work.

We talked about flying. I since found some peer-reviewed numbers, which I posted in Some flying pollution numbers. In the week before recording, he flew round trip to Seattle, Miami, Bahamas, and in the next week Rwanda.

Then he shared his reasons for not engaging on the environment. You'll recognize them. Remember when he said he was uninformed? On the contrary, I'd say, he learned everything he needed to justify feeling good about not changing his behavior. Even so, I respect and admire that he engaged in our conversation and started finding ways to act.

01.
HOUSING / 3 days ago
Musk's texts; Bed Bath & Beyond Needs a Miracle; U.K. Pensions Got Margin Calls; Thoughts on the housing market; Whatever Happened to the Starter Home?; Get TSA PreCheck or Global Entry
By Whitney Tilson
02.
MACROECONOMIC OUTLOOK / 3 days ago
Another bad day in court for Team Musk; Chaos in U.K. markets; Huge rise in interest rates this year; Apple's new iPhone 14 Pro; Greetings from Florida
By Whitney Tilson
03.
MACROECONOMIC OUTLOOK / 5 days ago
Three Men Charged in Stock Scam Involving $100 Million Deli; Why Is the Pound Getting Pounded?; How Europe Stumbled Into an Energy Catastrophe; Speeding Up Your Daily Walk Could Have Big Benefits
By Whitney Tilson
04.
MACROECONOMIC OUTLOOK / 6 days ago
Investors are super bearish; So is it time to back up the truck?; A coming 'exodus'; Cassava Sciences tumbles; Federer's last match; ABBA concert
By Whitney Tilson
05.
INVESTING ADVICE / 5 days ago
Regulators' harassment of short sellers; Short Sellers Upended a Small Farm Real-Estate Company; End of a SPAC Era; DWAC changes address to UPS Store; Factory Jobs Are Booming Like It's the 1970s; Last day in London
By Whitney Tilson