Jobs report; Why I sold nearly half of my airline stocks yesterday; 'Bankrupt in Just Two Weeks' â Individual Investors Get Burned by Collapse of Complex Securities

1) Following up on yesterday’s e-mail about the bull-bear debate on the market, today’s shockingly strong May jobs report is a strong sign that the economy may be recovering more quickly than almost anyone was expecting.

With 21.2% of Americans still unemployed or underemployed (including part-time workers and those who gave up looking for jobs), we’re far from out of the woods, but let’s all hope that today’s news is the start of even better news to come!

2) In my March 17 e-mail, just a few days before the market bottomed, I wrote:

What an incredible time to be an investor!

I continue to put my “dry powder” to work on big down days like yesterday, mostly in the S&P 500 (to prevent conflicts of interest, I can’t buy any stocks we recommend in our various Empire Financial Research newsletters).

We’re only recommending one airline stock, however, so yesterday I took advantage of the collapse in this sector to buy a basket of six others. I also bought a basket of seven financial stocks this morning. I can’t predict how much further they might fall, but I’m confident that stocks like these will rally the most when (not if) the market turns.

As is often the case, I was a bit early. Hence, for quite a while, I was deep underwater on my airline and bank stocks.

Airline stocks in particular got pummeled, not only by the coronavirus crisis, but then again when Berkshire Hathaway (BRK-B) CEO Warren Buffett disclosed during his annual meeting on Saturday, May 2 that he’d dumped his large stakes in Delta (DAL), American (AAL), United (UAL), and Southwest (LUV).

I seriously considered pulling the plug as the stocks cratered the following Monday, but decided to think for myself and remembered why I’d bought them in the first place: as a levered play on an economic rebound.

I’m sure glad I did because as of yesterday’s close, these airline stocks had soared between 39% and 80% since then (and are up big again today), versus only 10% for the S&P 500 Index, as this chart shows: 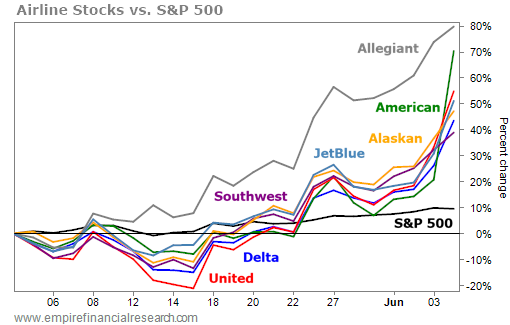 As you can see, every stock in the sector had a particularly good day yesterday, led by American, which soared 41% after announcing that:

[I]t would boost July flights 74% compared with this month, signaling that U.S. travelers freed from shelter-in-place orders are returning more quickly than expected.

The busiest days next month will have about 4,000 flights, up from 2,300 in June, said Vasu Raja, American’s senior vice president of network strategy. The July figure is equivalent to 40% of capacity a year earlier, compared with 30% in June, the airline said Thursday. Capacity was even less in May, after a devastating collapse in flying spurred by the Covid-19 pandemic.

“People are hungry, eager to get back into the economy,” Raja said in an interview. “We feel a real confidence to fly a much bigger July.”

American’s expanded schedule builds on recent indications from rivals that customers are starting to make their way back onto planes, at least for domestic flights, after fleeing in April because of the coronavirus. While traffic is still weak by historical standards, the airline’s trends suggest that the worst has passed – and that the rebound in demand has a chance of outpacing the dire expectations the industry was outlining as recently as last month.

Such a huge rally left me with a dilemma: Should I bank my substantial profits – up 26% on average – or keep riding the wave?

This is a high-class problem – “Gee, I’ve made so much money, what to do?” – but it shouldn’t detract from its importance. By far, the most costly mistakes I’ve made in my career were selling stocks like Apple (AAPL), Amazon (AMZN), Home Depot (HD), McDonald’s (MCD), Ross Stores (ROST), and, most infamously, Netflix (NFLX) far too early.

To make this decision correctly, it’s critical to remember what kind of company you’re dealing with and why you own it. Is this a high-quality business and a long-term compounder that you can hold for years or even decades? Or are you just in it for a trade, hoping to catch a bounce?

I massively prefer the former, but am happy to occasionally do the latter, usually when I believe the sell-off in a particular stock or sector is overdone – as was the case with the airlines. But if so, you need to be quicker to take profits.

It’s also important to look for signs that a stock or sector is caught up in a speculative bubble – a sure signal to sell.

In the case of airlines, this certainly appears to be the case, as this Yahoo Finance article highlights: ‘Bored’ Millennial Day Traders Boost Airline ETF’s Assets 2,930%. Excerpt:

The US Global Jets exchange-traded fund, ticker JETS, posted its 64th consecutive day of inflows on Tuesday, according to data compiled by Bloomberg. Its growth has been staggering: The ETF held just $33 million in early March as the coronavirus pandemic grounded global air travel. The fund’s top holdings are the four major U.S. airlines, though it said last week that it will begin investing in Canadian carriers as well.

Much of that explosive growth in assets can be credited to day traders looking to “catch the bottom” in airline stocks, according to Frank Holmes, chief executive officer of JETS issuer U.S. Global Investors. After speaking with newly minted JETS holders, he says the boredom of being stuck at home and the strong rebound in carriers after the 2001 terrorist attacks and the 2008 financial crisis are luring young traders.

“All these millennials, being stuck at home with no bars to go to and no beaches to travel to, took their money and became day traders,” said Holmes. “They’re bored, they want to make money.”

In particular, the growing popularity of JETS on retail trading platform Robinhood has “shocked” Holmes. The number of users holding JETS surged to nearly 30,000 this week, according to Robintrack, a website unaffiliated with the site that uses its data to show trends in positioning. That compares to 500 at the beginning of March.

The combination of the big run-up and this article were the tipping point for me, so yesterday I sold nearly half of my airline stocks.

Why didn’t I sell everything? Because long experience has taught me that I’m almost always too early in calling the tops of speculative bubbles so – perhaps cynically, I’ll admit – I’m going to stick around for another possible leg up (which is already happening today!).

But this is key: No matter what happens, I’m going to be fine because I sized this bet correctly. In total, the six airlines stocks I bought were only about 3% of my assets at the time of purchase, now down to 2% after yesterday’s sales.

3) Though I’ll admit that my investment in airlines was speculative, I generally strongly advise against speculation of any sort. It’s so easy to get into a lot of trouble, as this front-page story in the Wall Street Journal this week shows: ‘Bankrupt in Just Two Weeks’ – Individual Investors Get Burned by Collapse of Complex Securities. Excerpt:

When William Mark decided to get back into investing after the 2008 financial crisis, he looked past stocks and bonds. Needing to play catch-up with his retirement portfolio, the piping engineer decided to bet on a complicated product he hoped would deliver double-digit annual returns.

It worked so well – earning him 18% a year in dividends, on average – that he eventually poured $800,000 into the investments, called leveraged exchange-traded notes, or ETNs. When the coronavirus pandemic hit, he lost almost every penny.

The pandemic-fueled economic downturn has sparked turmoil in nearly every financial market. It has taken a particularly brutal toll on investors like Mr. Mark, who wagered on the roughly $7 trillion market for structured products: complex instruments that include ETNs, options-based strategies and certificates of deposits whose returns are tied to stocks or currencies.

Banks and brokerages advertised them as offering payouts both steadier and more lucrative than plain-vanilla investments such as bonds or index-tracking funds. Most professional money managers avoided them. For many less sophisticated retail buyers, the market blowup taught the kind of painful lesson that comes with just about every economic crisis: There is no such thing as an investment that is both safe and highly profitable.

The article raises difficult questions about what major financial firms and regulators should do to protect investors from highly speculative, risky investments.

But if you think big banks or regulators are going to protect you, please call me, as I have an oceanfront property in Kansas to sell you. You’re on your own, so you’d better be a lot smarter than the folks profiled in this article.

If you want to take 5% of your portfolio and speculate like a maniac in things like cryptocurrencies, day trading, derivatives, and levered ETFs/ETNs, I won’t fault you. When I’m in Vegas, I’ll occasionally sit down with my friends and play a little blackjack, even though I know the odds are against me.

But if you’re going to do something foolish for fun, it’s critical to: a) be honest with yourself about what you’re doing; and b) be disciplined about keeping it small. It’s so easy to get sucked down a rabbit hole and blow yourself up…