1) In yesterday's e-mail, I wrote about the basket of six bank stocks I bought last March. I haven't sold a share of any of them (despite my investing hero, Warren Buffett, dumping most of his financial stocks last year).

One of my favorites is JPMorgan Chase (JPM), in large part because of its legendary CEO Jamie Dimon – he's known for his thoughtful, in-depth annual letters.

He released his latest one yesterday – the longest ever, at 66 pages – which you can read here. I enjoyed it and found that he shares my views on many things, such as the coming economic boom. Excerpts:

"Americans know that something has gone terribly wrong, and they blame this country's leadership: the elite, the powerful, the decision makers – in government, in business and in civic society. This is completely appropriate, for who else should take the blame? And people are right to be angry and feel let down. Our failures fuel the populism on both the political left and right. But populism is not policy, and we cannot let it drive another round of poor planning and bad leadership that will simply make our country's situation worse."

2) In last Thursday's e-mail, I described Cathie Wood's ARK Space Exploration & Innovation Fund (ARKX) as "yet another sign of speculation and foolishness in the markets," noting that "Wood has filled it with stocks that have nothing to do with space."

Not everyone is a fan of the fund's makeup. Some took to social media, creating memes to mock ARK's decision to include Deere (DE) and other companies that appear to have no significant ties to the fund's theme of investing in space exploration and innovation. One showed a Deere tractor roving across a Mars landscape, another on the moon.

Deere, for its part, responded with several of its own memes, including one showing a UFO beaming up a tractor. Some analysts said the inclusion of Deere is less of a stretch when considering that the company makes satellite-guided machinery.

Other stocks included in the fund that seem at odds with its mandate include ARK's passively managed 3D-printing ETF and shares of Netflix (NFLX) and Amazon (AMZN).

Here's another funny meme a friend sent me: "The Evolution of Space Flight by Cathie Wood and ARK." 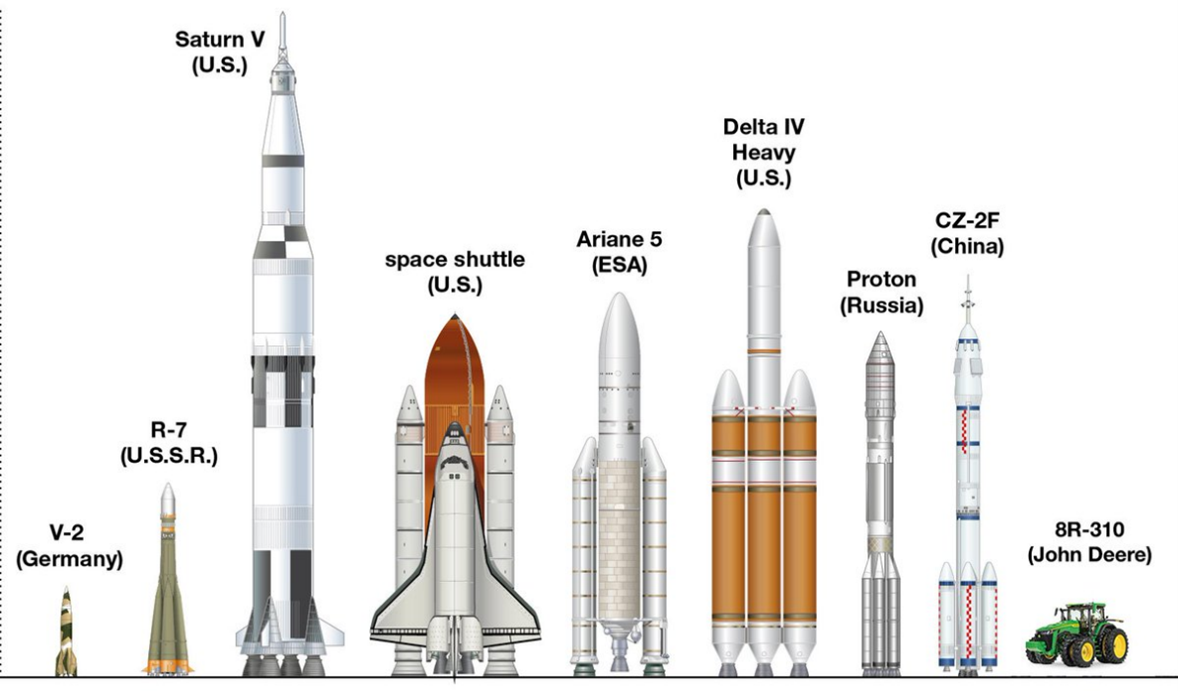 The largest holding in ARKX is Trimble (TRMB), which is involved in 3D printing. The second largest is The 3D Printing ETF (PRNT), which owns a ton of TRMB. (ARKX's holdings are detailed here.)

The last few days, the other ARK Invest funds have been ~20% of the volume of TRMB. A suspicious mind might think they were trying to pump up ARKX's net asst value through buying of TRMB in materially larger ETFs they control...

My advice: Stay far, far away from this stinker!

3) Speaking of stocks to avoid, activist short sellers have recently released compelling reports on various companies. Here are a few that caught my eye:

Nano Dimension (Nasdaq: NNDM – $2.14 billion), an Israeli 3D printing company, has risen over 1,000% on optimism that its DragonFly printer can be used to make electronic circuit boards. Nano Dimension's current CEO has been previously accused, but never convicted, of an "extortion attempt" and the company's former Chairman was arrested on charges of money laundering, aggravated fraud, and securities violations. Nano Dimension's history includes consistent unprofitability, serious dilution, an OTC to Nasdaq uplisting, a 50 for 1 reverse split, and 253 press releases.

Nano Dimension lacks the economic substance of many other multi-billion companies. Its revenue in 2020 totaled $3.4 million, less than half its $7.1 million in revenue during 2019. In its 10-K for the year ended 2020, Nano Dimension disclosed having 87 full-time employees, down from the 91 people it employed in 2018. Over the last five years, the company has spent approximately $42 million in R&D and earned $17 million in total revenue. Nonetheless, the company touts deals with "defense contractors" and sells investors on the potential of its 3D printers.

Shares outstanding have gone from about 1 million in 2017 to over 80 million in December 2020.

4) Jeers to the telecom companies that allow our text messages to be hacked so easily: A Hacker Got All My Texts for $16. Excerpt:

This overlooked attack vector shows not only how unregulated commercial SMS tools are but also how there are gaping holes in our telecommunications infrastructure, with a hacker sometimes just having to pinky swear they have the consent of the target.

"Welcome to create an account if you want to mess with it, literally anyone can sign up," Lucky225, the pseudonymous hacker who carried out the attack, told Motherboard, describing how easy it is to gain access to the tools necessary to seize phone numbers.

Fortunately, Lucky225 was taking over my number and breaking into the connected accounts with my permission to demonstrate the flaw. This also doesn't rely on SS7 exploitation, where more sophisticated attackers tap into the telecom industry's backbone to intercept messages on the fly. What Lucky225 did with Sakari is easier to pull off and requires less technical skill or knowledge. Unlike SIM jacking, where a victim loses cell service entirely, my phone seemed normal. Except I never received the messages intended for me, but he did.

Once the hacker is able to reroute a target's text messages, it can then be trivial to hack into other accounts associated with that phone number. In this case, the hacker sent login requests to Bumble, WhatsApp, and Postmates, and easily accessed the accounts.

"I used a prepaid card to buy their $16 per month plan and then after that was done it let me steal numbers just by filling out LOA info with fake info," Lucky225 added, referring to a Letter of Authorization, a document saying that the signer has authority to switch telephone numbers. (Cyber security company Okey Systems, where Lucky225 is Director of Information, has released a tool that companies and consumers can use to detect this attack and other types of phone number takeovers.)

The method of attack, which has not been previously reported or demonstrated in detail, has implications for cybercrime, where criminals often take over target's phone numbers in order to harass them, drain their bank account, or otherwise tear through their digital lives. The attack also brings up issues around private, corporate, and national security, where once a hacker gains a foothold on a victim's phone number, they may be able to intercept sensitive information or personal secrets.

"It's not hard to see the enormous threat to safety and security this kind of attack poses. The FCC must use its authority to force phone companies to secure their networks from hackers. Former Chairman Pai's approach of industry self-regulation clearly failed," Senator Ron Wyden said in a statement after Motherboard explained the contours of the attack.