It Ain't Over Till It's Over

Editor's note: Today in Empire Financial Daily, our friend and colleague Marc Chaikin – founder of our corporate affiliate Chaikin Analytics – is back to explain why investors should be cautious about the recent bear market rally...

We just saw a surge of optimism in the markets...

The latest inflation report came out earlier this month. And notably, the numbers came in a little bit better than the experts predicted.

Specifically, the Consumer Price Index ("CPI") experienced its smallest monthly increase since January. Unfortunately, the year-over-year increase in CPI was still more than 7%.

In other words, inflation remains really high. It's still near its highest level since the 1980s. But despite that, another bear market rally has been playing out in stocks.

The latest surge of optimism was huge for stocks. The CPI news sent the S&P 500 Index up more than 6% in two days.

Some folks even believed the Federal Reserve would end its tightening cycle. Take a look...

Now, I'm not trying to be a curmudgeon. I'm glad people are looking for reasons to be hopeful.

After all, we've endured a brutal year as investors. Even with the recent rally, the S&P 500 is still down more than 15% this year.

But bursts of hope and optimism are normal during bear markets. And a brief reprieve doesn't mean the pain is completely over.

In fact, recent history shows us that these types of rallies can be incredibly fragile...

It's amazing how quickly investors forget.

The slightest bit of good news can send stocks soaring during a downturn. And that can happen even when major economic headwinds remain.

With just a quick look at the S&P 500's chart, you can tell that we've taken this road before. Heck, we've already seen it twice in the current downturn. Take a look... 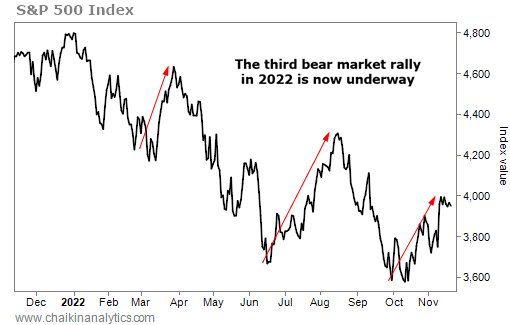 I think all of us hoped that would be the end of this bear market. But inflation persisted. And the Fed had little choice but to keep tightening its grip in response.

Today, the market is up more than 10% from its latest bottom. And as I said, another huge outpouring of investor optimism pushed stocks higher. Folks are ready to get excited again.

But that doesn't change the big picture...

The war in Ukraine is still disrupting the oil and gas sector, as well as other global commodities. Serious inflation problems remain for much of the world. And Fortune 500 companies are in one of the deepest layoff cycles in decades.

Not only that, but hopes for a dovish Fed are already fading, too. Fed officials have said inflation needs to slow down more... And they're willing to keep hiking rates to make that happen.

Will the economic picture get better eventually? Of course.

We can still be realistic about what's happening, though...

After the historic stock market bottom in 2009, the market soared. The Fed kept interest rates low for years. And that bull run turned into one of the greatest asset booms in history as a result.

So, caution is still important today. But while all of this is true... it doesn't mean we've run out of opportunities, either.

In fact, I believe 2023 could be the best year yet for a certain type of investor.

For now, remember that bear market rallies are normal. And it's common to feel like "everything is getting better" right before the market turns lower yet again.

More simply... It ain't over till it's over.

Editor's note: According to Marc, a massive shift is coming to the U.S. financial system – one that could have a huge effect on your wealth in 2023. He says you must take a simple action before January 2 in order to prepare.... and it could make you a huge potential gain as the whole thing unfolds. Learn more here.