Is inflation going to trigger a market crash?; More thoughts on Tether; Bubbles return to trend line; Cryptos and ARKK aren't there yet, but blue-chip tech stocks are; Bull-bear debate on Tesla; How Social Media Filters Are Destroying Our Mental Health

1) With inflation at 40-year highs and many economists predicting a recession, I'm hearing more and more questions like these from people...

The right move on a coming "inflation shock" could be the difference between losing a lot of money and falling behind on your retirement plans... or walking away unscathed.

I'll also be featuring a special guest who has a unique take on how to turn all the volatility we're seeing this year into more money in your pocket.

The event is completely free to attend, but just make sure to reserve a spot in advance – you can do so right here.

2) Crypto "stablecoin" Tether (known by the symbol USDT) remains the best short I've ever seen for reasons I described in Thursday's and Friday's e-mails – not because it's certain to collapse (as Terra was – it's down from $0.63 when I wrote about it on Thursday to $0.13 this morning – and in contrast, I think Tether is only, say, 30% likely to "break the buck" in the next month or so), but because there's no downside if you're wrong since it's trading at a fraction of a penny below a dollar and can't go above a dollar. 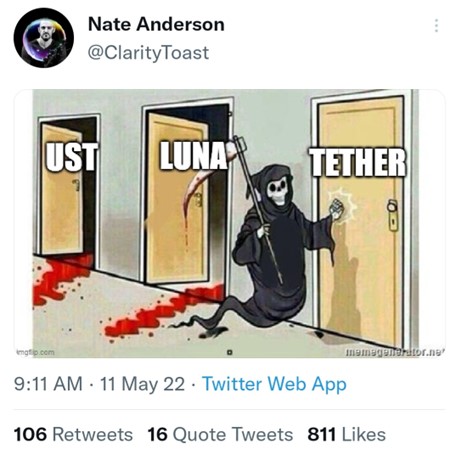 I wouldn't be at all surprised if my old friend Mike Burry, made famous by the book and movie The Big Short, is betting against Tether, as this tweet speculates (the picture is of actor Christian Bale, who played Burry in the movie): 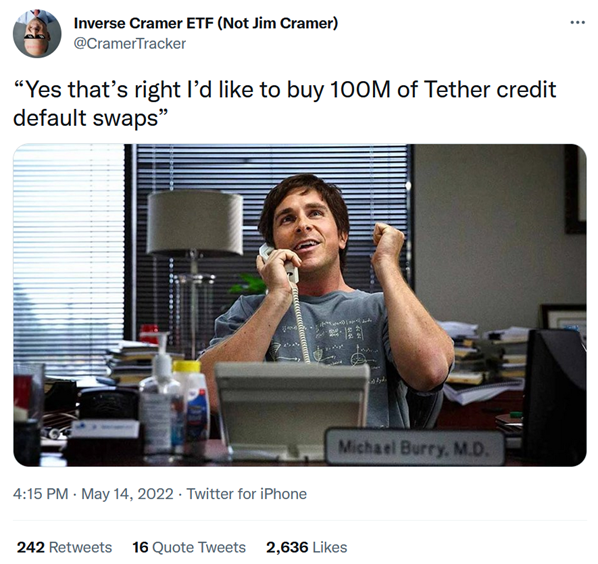 3) There's evidence of stress in the Tether market, as Bitfinex, which owns Tether Limited, is offering 31.686% interest to borrow Tethers (in contrast, it's paying 0.0225% annual interest for bitcoin and 4.37% for ethereum). Here's what the Bitfinex website showed this morning:

3) This chart by BofA, tweeted here, captures another reason why I remain bearish on cryptos but have turned more constructive on blue-chip tech stocks – the former remain well above the long-term trend line, whereas the latter are now back to it: 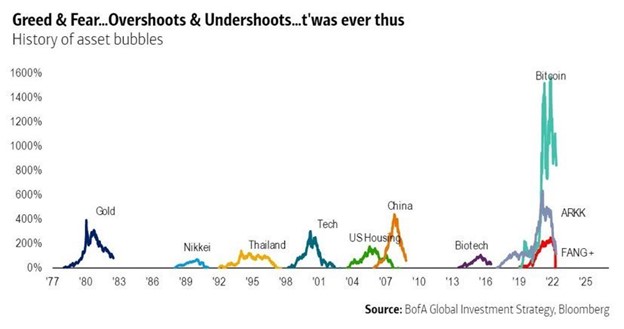 4) Note that Cathie Wood's ARK Innovation Fund (ARKK) is in between – mostly, but not all the way, back to the trend line. That doesn't surprise me as I look at the fund's top 10 holdings, about half of which I consider good longs and the rest I'd short: 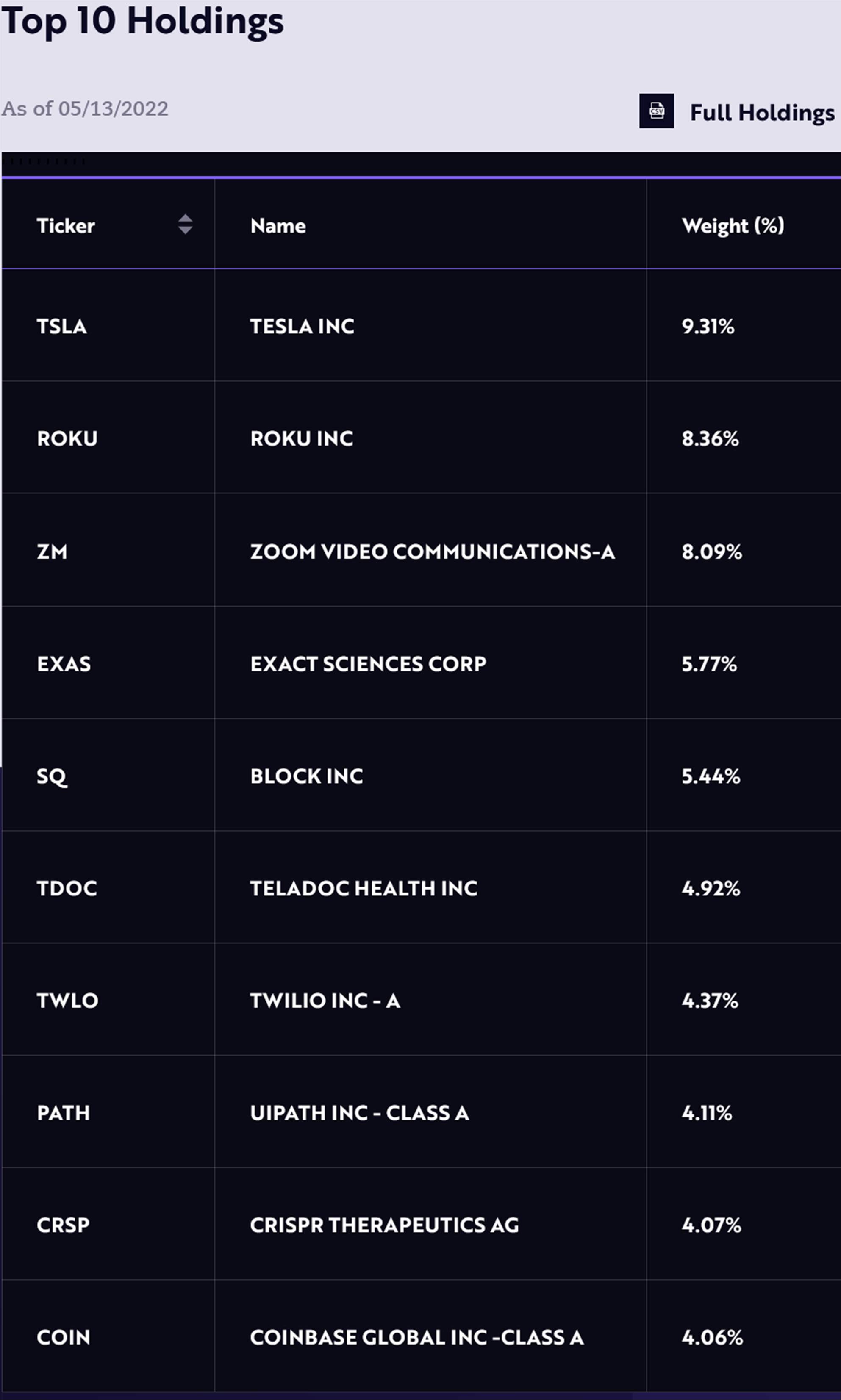 In summary, if you want to play a rebound in beaten-down tech stocks, which I think is a good idea with a modest portion of your portfolio (I think Thursday may prove to be a low), there are much better ways to play it than ARKK.

5) Speaking of Wood's largest position, Tesla (TSLA), I continue to follow the company closely and send e-mails a couple of times a week to the 4,000 people on my Tesla e-mail list (to join it, simply send a blank e-mail to: [email protected]).

I remain neutral on the stock and try to share roughly equal amounts of bullish and bearish commentary (there's little in between!).

Along these lines, I recently shared the monthly letter of Mark Spiegel of Stanphyl Capital. Click here to read it. Excerpt: 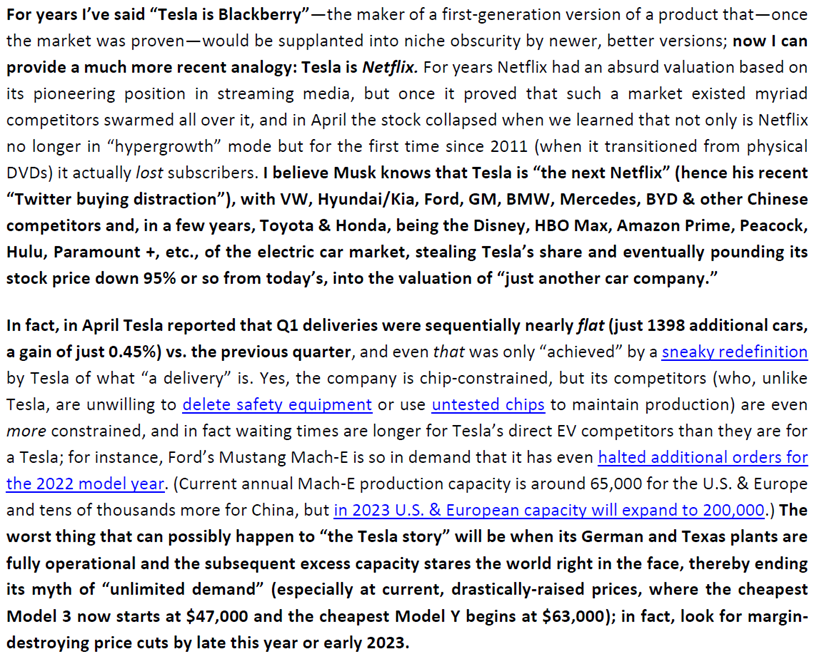 In contrast, here's a bullish report by Worm Capital. Summary:

We believe Tesla is on a path to dominate the S&P 500 by 2030. Some conclusions from the report:

6) Here's comedian Trevor Noah with a scary segment on The Daily Show: How Social Media Filters Are Destroying Our Mental Health... 13-year-olds getting plastic surgery. Wow, that's messed up...