1) Before continuing my discussion of Facebook (FB), in which I continue to be highly critical of some of the company's business practices, I want to repeat what I wrote in my September 24 e-mail: I am not recommending selling the stock, which – even after yesterday's 2.1% rally – remains down 13.4% since hitting an all-time high a month ago.

Here's how I explained this apparent contradiction:

I'm able to hold two seemingly contradictory thoughts in my head at the same time: a company may be behaving badly, yet its stock might be undervalued.

In fact, this is often the case, especially if you're a value-oriented investor like me. We look for beaten down, out-of-favor stocks – which sometimes is the result of some taint. But as legendary investor Bill Miller once noted: "If it's in the headlines, it's in the stock price." And if the problems prove to be fixable, the stock can soar...

Here at Empire Financial Research, our most important job is to give our subscribers money-making stock ideas. Thus, we haven't hesitated to recommend controversial companies...

My colleagues Enrique Abeyta and Berna Barshay and I are always looking for opportunities to add to our favorite positions on weakness, so we're taking a close look at Facebook right now. Subscribers should keep an eye out for our conclusion in the coming days and weeks...

P.S. You can get the first year of Empire Stock Investor for only $49 – find out more right here.

2) I also want to give the other side a hearing, both out of a sense of fairness and also because I might be wrong (spoiler alert: I haven't changed my mind, but I'm more enlightened).

At the most basic level, I think most of us just don't recognize the false picture of the company that is being painted.

Many of the claims don't make any sense. If we wanted to ignore research, why would we create an industry-leading research program to understand these important issues in the first place? If we didn't care about fighting harmful content, then why would we employ so many more people dedicated to this than any other company in our space – even ones larger than us? If we wanted to hide our results, why would we have established an industry-leading standard for transparency and reporting on what we're doing? And if social media were as responsible for polarizing society as some people claim, then why are we seeing polarization increase in the U.S. while it stays flat or declines in many countries with just as heavy use of social media around the world?

At the heart of these accusations is this idea that we prioritize profit over safety and well-being. That's just not true.

I have to tip my hat to Zuckerberg – his post is very well written. He and his public relations people no doubt worked very hard on it.

3) An old friend who's a veteran of the tech industry and knows Facebook extremely well echoed Zuckerberg's arguments in an e-mail exchange we had yesterday. He wrote:

Your post on Facebook today is absurd and has no basis in fact. Haugen had no direct reports, never met a senior executive at Facebook, started with extreme bias, and then only found/extracted information that confirmed it. She never worked in the areas she is "so knowledgeable about" – like teens – so has no idea what Facebook is trying to do. The group she worked for was NOT disbanded – it was rolled into a larger, more effective longer term group, etc., etc.

You would not take advice from me on mountain climbing just because I stood next to a mountain or because I published your e-mails on hiking. It's ridiculous. And shameful that Congress is wasting our money on this person. Her opinion – which she is entitled to – is as good/qualified as yours or mine. She is certainly not someone the company (or any company) should hire. I personally expect people to have facts before they make arguments.

I'm not clear: do you disagree with me that there's a problem that needs to be addressed (either by Facebook or, failing that, government action), or merely with my proposed solution?

PS – I think I'm going to e-mail Sheryl with a second hiring recommendation: you as PR flak! 😂

Ha ha. Yes, there is a huge problem but I disagree Facebook is blind to it. Easy to back-seat drive here. On regulation, they are asking for it, and on Haugen, she is a person with no authority to speak on this subject.

You could say that all the way up to Mark and Sheryl. I hope those above Haugen who watched what was going on yet only griped to each other and on internal message boards rather than having the courage to do what Haugen did are feeling shame right now.

She has no idea what Facebook is doing or what the algorithm does or the tough choices the company has to make. It's easy to just talk – and that's all she is doing. She knows nothing. It's a lot harder to actually run a business and deal with the real issues and trade-offs.

She's a complete idiot. And I know a lot of people like her and I don't doubt that they really care, but Facebook does a lot of good and has to balance the good and the bad. Until you run something, you don't know the real issues.

They should have allowed her to be cross-examined. If she stood up to that, I would rest my case. She would not last a minute without showing she is basically as knowledgeable as a tabloid – at best. It's like the janitor telling Zuckerberg how to run Facebook. That is her level of knowledge as to what's actually going on. This extends to idiots on Facebook's board as well by the way.

She's an idiot looking for five minutes of fame. Industry veterans are cringing.

What company do you know that allows these online employee forums? They encourage everything to be challenged so they can improve. It's amazing. She violated the trust that is needed for that. And in so doing has damaged every company, including Facebook, that genuinely is trying to do better.

I can tell you that Facebook is going to stop the open discourse. And the few other companies that allow it will also. She has done enormous harm and said nothing we all didn't already know. It's all downside.

Thanks for sharing your perspective! I welcome well-articulated viewpoints that are contrary to my own. Makes me think. I'm not persuaded – but definitely enlightened.

This e-mail is getting long, so I'm going to pick up this discussion tomorrow, sharing extensive feedback from my readers and my own thoughts – in particular, responding to the highly misleading arguments that Zuckerberg and my friend make above.

4) Susan and I enjoyed the first day of our Backroads trip yesterday, driving with our guide 90 minutes up the coast toward France to an area called Costa Brava and doing an easy 5.6-mile hike. Here are some pictures: 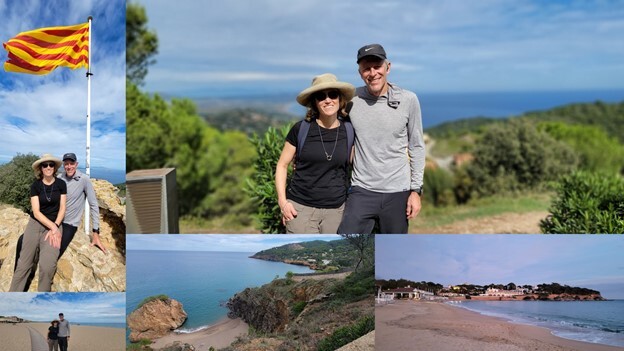 Sharp-eyed readers may note that the flag behind us in the first picture isn't that of Spain but rather of Catalonia, the region we're in. Interestingly, that's the only flag we've seen in the two days since we arrived, reflecting the Catalan independence movement, which dates back more than a century.

P.P.S. My colleague Enrique Abeyta is looking to hire a junior analyst to help him launch his upcoming newsletter, Empire Elite Crypto, later this fall. If you geek out on cryptos and enjoy writing, we'd like to hear from you. Send us your résumé and a one-page write-up of your favorite crypto investment idea right here.