Is Bitcoin about to collapse?; The Essex Boys: How Nine Traders Hit a Gusher With Negative Oil; Skiing in Montana; Observations from my flights yesterday

1) I'm still looking into it, but if this article (by an anonymous author) is correct – and I think it is – then the price of bitcoin is about to collapse!

The author's argument is simple: roughly 70% of bitcoin's daily trading volume is in another cryptocurrency called "Tethers." This crypto is issued by a company named Tether Ltd., which appears to be a total fraud.

This doesn't mean that bitcoin itself is a fraud (I don't think it is) – rather, its price has been significantly inflated by fraud. What happens if 70% of the daily buying of bitcoin suddenly disappears? The Bit Short: Inside Crypto's Doomsday Machine. Excerpt:

Because Tether sounds exactly like a currency fraud, it may not surprise you to learn that Tether Ltd. is currently under investigation by the Office of the Attorney General for the Southern District of New York. That investigation was announced to the public on April 25th, 2019...

Beginning in September, Tether Ltd. begins to issue multiple large blocks of Tethers per day. The pace accelerates, with $2.3 billion worth of Tether issued in the first week of 2021 alone.

This was consistent with the possibility that, as Tether Ltd.'s various legal challenges failed one after another in the New York courts, Tether Ltd. was choosing to issue Tethers faster and faster to maximize the amount of value it could extract from the crypto ecosystem before being shut down. The pace accelerates closer to Tether Ltd.'s final disclosure deadline – January 15th, 2021...

The last nail in the coffin was when I found out about the lack of visible reserves. If Tether Ltd. really was taking in 1 USD for each Tether it issued, then it should have as many dollars in its bank account as there are issued Tethers. And it turns out we can check if that's true! Tether Ltd.'s bank is Deltec bank in the Bahamas, and the Bahamas discloses how much foreign currency its domestic banks hold each month.

But during the same period, total issued Tethers increased by almost $5.4 billion – going from $4.6B to $10B!

The implication was shocking: there weren't nearly enough dollars in all the domestic banks in the Bahamas to back the Tethers that were floating around in the crypto market.

So this was crypto's big short: Tether Ltd. was short of U.S. dollars – to the tune of about $25 billion.

As I continue to dig into this, I'll keep you posted on what I learn...

2) What a rollicking great story! The Essex Boys: How Nine Traders Hit a Gusher With Negative Oil. It looks to me like they didn't do anything wrong – they were just great traders. Excerpt:

Among the many previously unthinkable moments of 2020, one of the strangest occurred on April 20, when the price of crude oil fell below zero. West Texas Intermediate futures, the most popular instrument used to trade the commodity, had started the day at $18 a barrel. That was already low, but prices kept tumbling until, at 2:08 p.m. New York time, they went negative.

Amazingly, that meant anyone selling oil had to pay someone else to take it off their hands. Then the crude market collapsed completely, falling almost $40 in 20 minutes, to close at -$38. It was the lowest price for oil in the 138-year history of the New York Mercantile Exchange – and in all likelihood the lowest price in the millennia since humans first began burning the stuff for heat and light.

Watching this spectacle unfold were traders, energy executives, and freight company employees – whose livelihoods are tied to oil's fluctuations. Regulators with the Commodity Futures Trading Commission in Washington stared at their monitors, stunned. "The screen was just going nuts," Tom Kloza, an analyst at the research firm OPIS Ltd., told Institutional Investor. The experience, he said, was like watching a film by surrealist director Federico Fellini: "You're able to appreciate it, but no one really knows what's going on."

Within 24 hours the insanity was over, oil cost money again, and it was tempting to see what happened as a blip...

U.S. authorities and investigators from Nymex trawled through trading data for insights into who exactly was driving the action on April 20. According to people familiar with their thinking, they were shocked to discover that the firm that appeared to have had the biggest impact on prices that afternoon wasn't a Wall Street bank or a big oil company, but a tiny outfit called Vega Capital London Ltd.

A group of nine independent traders affiliated with Vega and operating out of their homes in Essex, the county just northeast of London, had made $660 million among them in just a few hours. Now the authorities must decide whether anyone at Vega breached market rules by joining forces to push down prices – or if they simply pulled off one of the greatest trades in history.

I'm skiing here for the next five days, followed by four days at Big Sky. With me are my analyst Kevin DeCamp – author of my recent e-mails on Tesla (TSLA) – my friend Donovan Royal – my best source on Lumber Liquidators (LL) during my 2015 activist short campaign – and another friend, Alistair duPont, who invited me to volunteer at the Samaritan's Purse field hospital in Central Park last spring. Here's a picture of us helping set it up: 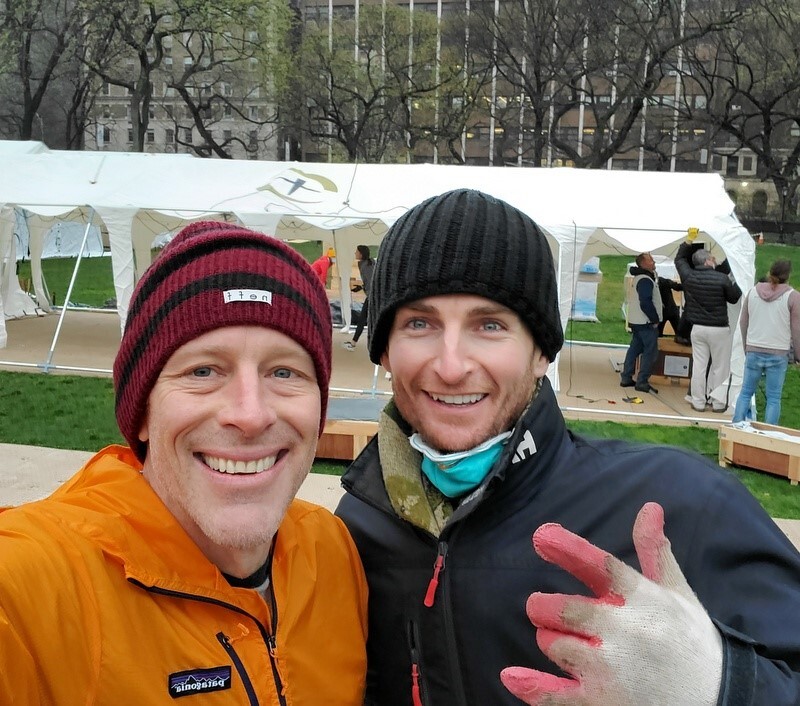 And here's a picture of Kevin and me when we met on the slopes of Jackson Hole six years ago: 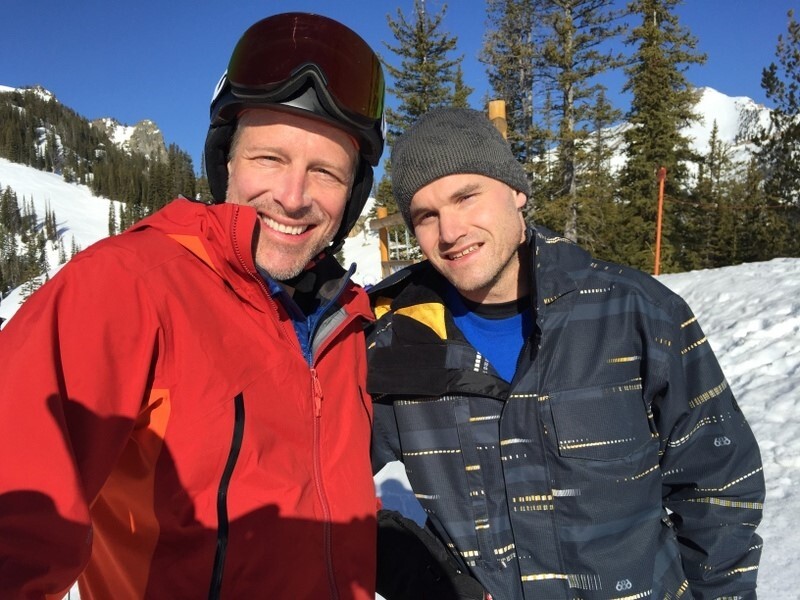 4) My two flights yesterday were only about half full (the number of travelers is currently down around 60% year over year) and LaGuardia was a ghost town. Here are two pictures I took of the spectacular new American Airlines (AAL) terminal B: 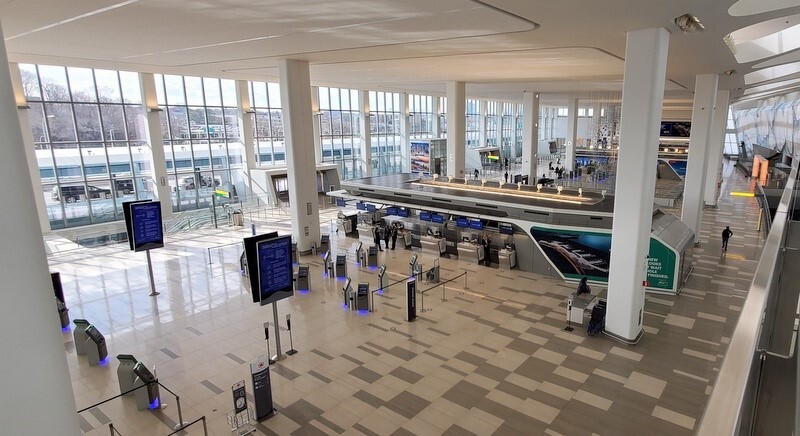 Fares are ridiculously cheap, and most airlines have waived change fees. Let me give you two examples from this trip...

First, after I decided to extend my trip to include skiing at Big Sky, I was able to cancel the return flight I'd originally booked from Missoula (for $173) and book another one three days later from Bozeman (for $129) – and American not only didn't charge me an obscene fee, but gave me a $44 refund!

Second, when my flight yesterday on American to Dallas was cancelled due to a maintenance issue and the next flight wasn't for two hours, meaning that I'd miss my connecting flight, I went on Google Flights (my favorite search site) to see if other airlines offered any alternatives.

I wasn't hopeful about finding anything reasonably priced, since last-minute fares are notoriously expensive. But, to my surprise and delight, United Airlines (UAL) had a flight at 4:00 p.m. for only $119. So I saved another $50, and even better, by total coincidence, my youngest 18-year-old daughter was taking the first leg to Denver, so we traveled together.

I sure hope the airlines don't reinstate their tsunami of usurious fees as we emerge from the pandemic – but I'm not holding my breath!