IPOs Just Aren't What They Used to Be

Editor’s note: Regular Empire Financial Daily readers are familiar with our friend and colleague Jeff Brown over at Brownstone Research…

He has an aeronautical and astronautical engineering background and earned his master’s degree from the London Business School. He’s also an angel investor who has personally invested his own capital in dozens of private deals, including blockchain companies Coinbase and Ripple.

In today’s essay, he explains why regular investors are left with so little upside when high-quality companies go public. However, he’s found a little-known “backdoor”… and it’s one of his most exciting discoveries yet.

Initial public offerings (“IPOs”) simply aren’t what they used to be.

In the 1990s and 2000s, a company commonly went public if it was generating $50 million a year in revenue, and preferably at cash-flow breakeven. Take Amazon (AMZN), for example…

But just look at how things changed… 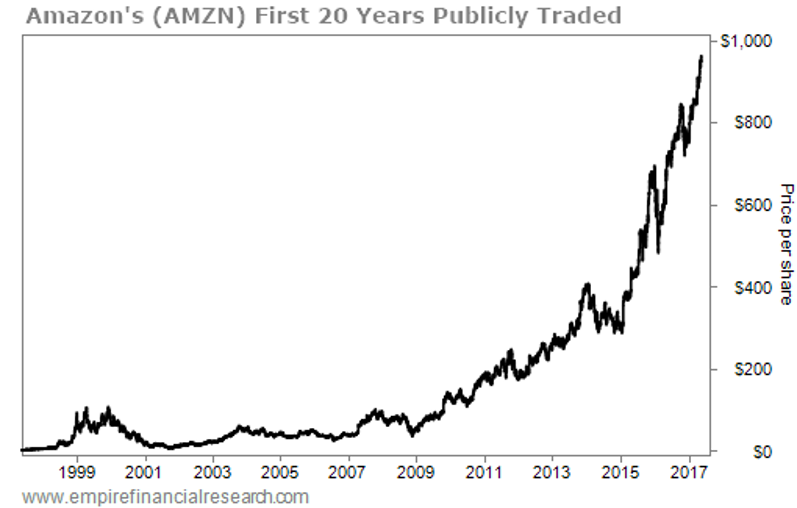 On a split-adjusted stock basis, Amazon rose from $1.54 per share to $966 during its first two decades as a public company. That is an incredible 627 times your money, or 62,627% return on investment.

The best part… Every retail investor had an opportunity to get in on those investment returns. Anyone who had a brokerage account could have enjoyed those gains.

Sadly, the opportunity to invest early has almost disappeared.

As I mentioned, in the late ’90s, companies like Amazon went public during their earliest stages of development, when the return potential was highest. But these opportunities have all but disappeared. What has happened since then?

It was a combination of two factors. The world experienced technology-driven economic growth unlike anything it had seen before. Advancements in semiconductor technology and software development hit an inflection point, enabling the creation of smartphones, the modern Internet, and extraordinary developments in machine learning and artificial intelligence that impact our lives in ways most of us aren’t even aware of.

And during the same time, interest rates plummeted. At the time of Amazon’s IPO, 10-year U.S. Treasury yields were an incredible 6.5%.

At that kind of yield, any investment bank or investor could double their money in 11 years… completely risk-free and without any leverage at all.

But that kind of yield didn’t last forever. The yield on a 10-year Treasury bond has been on an overall downward trend over the last 20-plus years, dropping to an almost unbelievable 1.08% today. 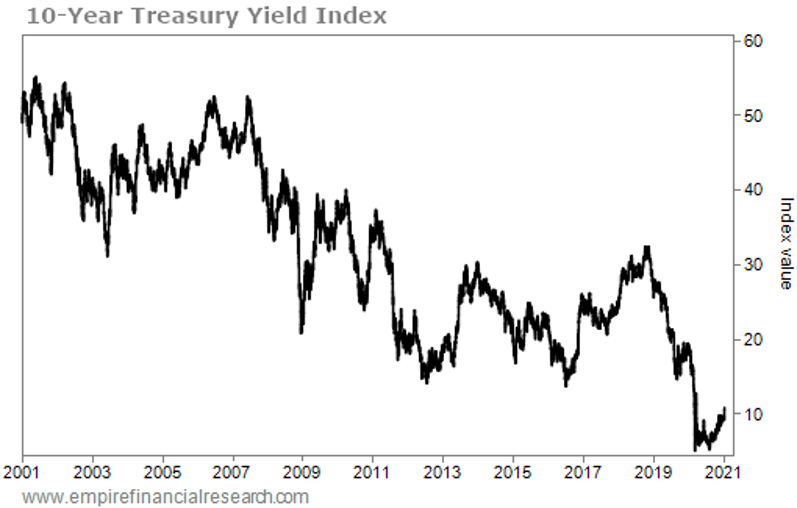 This downward trend in yields caused the investment community to look for other opportunities capable of generating much higher returns.

And this is precisely why high technology became the asset class that it did during that time frame.

During that 20-year window, the broad-based S&P 500 Index rose 171%. The technology-focused Nasdaq returned about double that: 360%.

Venture capital (“VC”), private equity, institutional money, and family offices all knew what was happening. They were using the same investment playbook.

What did they do? They decided to keep the most lucrative investments for themselves.

Instead of taking a company public during its early years, as Amazon did back in 1997, they changed the game.

Rather than giving retail investors access at such an early stage, the strategy quickly became keeping the most promising companies private as long as possible. By doing so, private investors were able to consistently increase the value of their investments with each successive VC or private-equity round.

And after eight to 10 years on average, these private investors would look to take their companies public at incredible valuations. By being patient and waiting for the right time in the market to take these companies public with the most hype, they can maximize their profits and leave nothing but table scraps for normal retail investors.

Nothing but Table Scraps

Sadly, this isn’t going to get better anytime soon. Why? The world is awash with cash right now. VCs and private equity like to call this “dry powder.”

As you can see in the chart below, institutional investors have been sitting on more than $1.5 trillion in dry powder. That’s more than Australia’s annual GDP. There has never been this much capital available for investment in history. 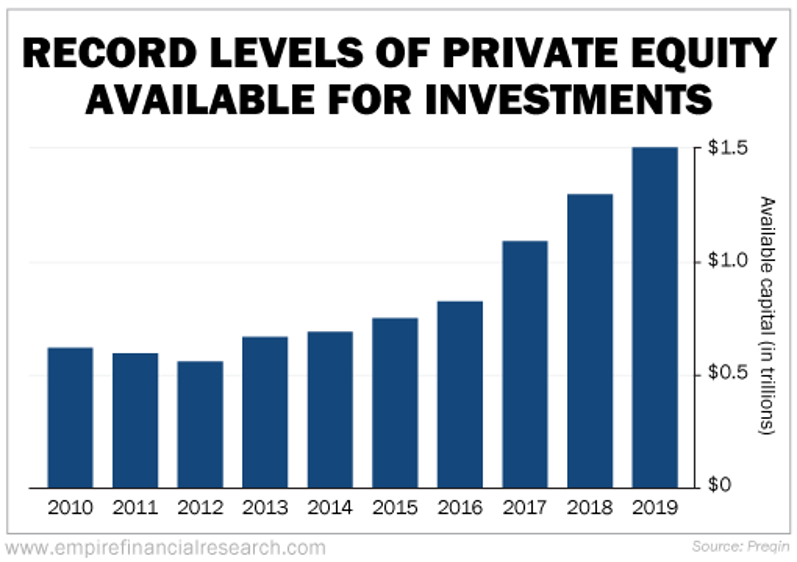 And right now, stocks are hovering near all-time highs. The majority of this money will not be put to work in public companies as a result.

Put simply, the bulk of this $1.5 trillion will be put to work in the area with the highest return potential: private companies with high growth potential.

However, this has caused a major distortion in the private markets.

There is so much capital available to pursue private-equity deals that the competition for any high-quality deal is tougher than ever. Not only has it become difficult to allocate capital into private-equity investments, but it has also become even harder to do so at compelling valuations.

This inevitably leads to the same problem that hedge funds have been having… lackluster returns.

A Backlog of Companies Just Waiting to Go Public

And at the same time, there is a backlog of hundreds of companies built over the last decade ready and wanting to go public. After years of building their businesses with private capital, they are ready for a liquidity event… an exit.

But going public is no easy task. And it is very expensive to do so.

On average, the cost for a company to go public is around 7% of the raise. The proceeds are distributed to all of the players involved in the public offering. And the investment banks rarely price an IPO at the right level.

After all, an IPO that jumps 30% on the opening means that the investment banks who underwrote the deal underpriced the offering. In other words, they left millions on the table at the expense of the company going public.

And when an IPO drops after the public offering, it comes at the expense of the investors who invested in the IPO.

The truth is that the perfectly priced IPO is one that is flat in the weeks that follow the public offering.

The other challenge with investing in IPOs is that getting access to shares before the IPO is impossible to do consistently. Every deal has different underwriters, and each underwriter allocates a certain number of shares to different brokers.

High-net-worth individuals with accounts at JPMorgan Chase (JPM) or Goldman Sachs (GS) tend to get first access to IPO allocations. For those with online brokerage accounts at Schwab, E-Trade, or TD Ameritrade, the same is true.

Those with the largest brokerage accounts get access first, and rarely do normal investors get a shot at any of the high-quality IPOs. Again, we’re left with the scraps, if anything at all.

P.S. There’s a little-known way for everyday folks to invest in private companies before they go public. I’ve recently discovered how this is possible… and on January 13 at 8 p.m. Eastern time, I’ll be sharing all of the details. I promise this free event will be worth your while… Click here to reserve your spot.