In yesterday's e-mail, I argued that holding cash is a better hedge against a market downturn than buying puts, and disclosed that I'm holding around 20% cash in my personal account.

While this may appear quite high, for me, it's about average. I was more than 50% cash going into the market's pandemic crash early last year and then went to less than 10% at the bottom as I took advantage of the once-a-decade buying opportunities.

I didn't keep my views a secret: In my e-mail on March 23, 2020, the day the market bottomed, I wrote, "This is the best time to be an investor in more than a decade." And the next day, my colleague Enrique Abeyta and I hosted a two-hour webinar and sent Empire Investment Report subscribers a special update with our 10 favorite stocks, which are up an average of 125% since that date.

Here's a table with the details – the first five were our conservative picks (up an average of 80%), and the second five recommendations were our aggressive ones (up 170% on average):

I've successfully identified numerous market tops and bottoms – and positioned my portfolio accordingly – going back to the peak of the Internet bubble in March 2000, thanks to a combination of analysis and my "spidey sense," honed by more than two decades of experience.

Unfortunately, most investors do exactly the wrong thing, piling into stocks at market peaks and then panicking and selling when it bottoms.

The answer, of course, is that investors aren't just invested in stocks – they shift their assets between equities, bonds, cash, real estate, and other assets.

This self-destructive behavior happens mostly with stocks – much less so for bonds and real estate – because people get emotional about stocks: They watch financial television, listen to management and promoters, and get caught up in sexy growth stories.

The same study showed that over those 12 years, the average bond mutual fund returned 9.7% annually (204% in total), while the average investor in a bond fund earned 8% annually (152%). This much narrower gap reflects that investors, collectively, are more calm and rational when investing in bonds because they're easier to value and not as prone to being overhyped.

So what are investors doing today, with the market 1% away from its all-time high, twelve-and-half years into a long bull market, with speculation running rampant in numerous areas?

As you can see in this chart (courtesy of CNBC), Stocks are at a 70-year high as a share of household financial wealth: 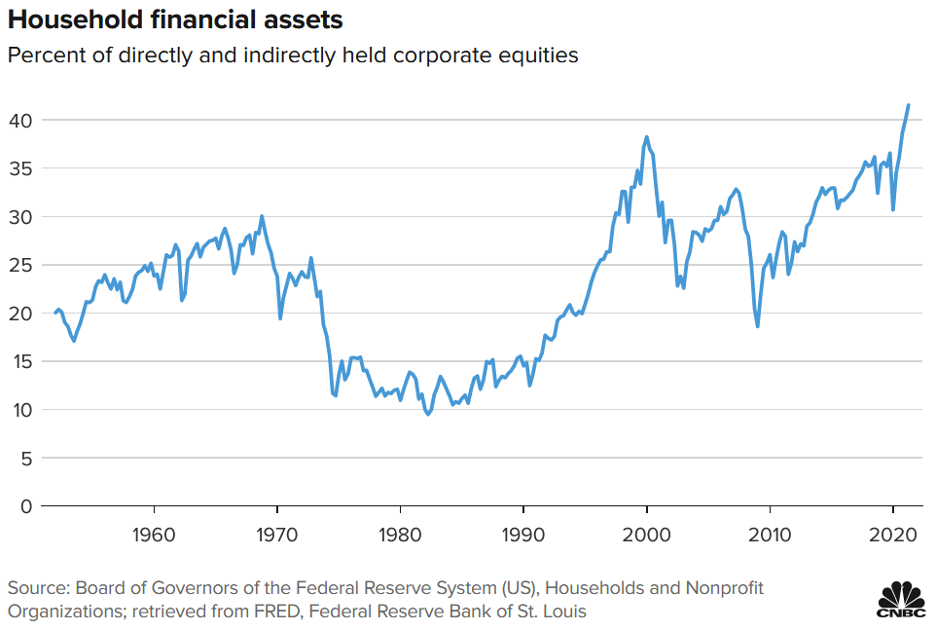 And here's a chart my friend Doug Kass of Seabreeze Partners posted, showing that margin debt is at an all-time high and free cash balances are at an all-time low: 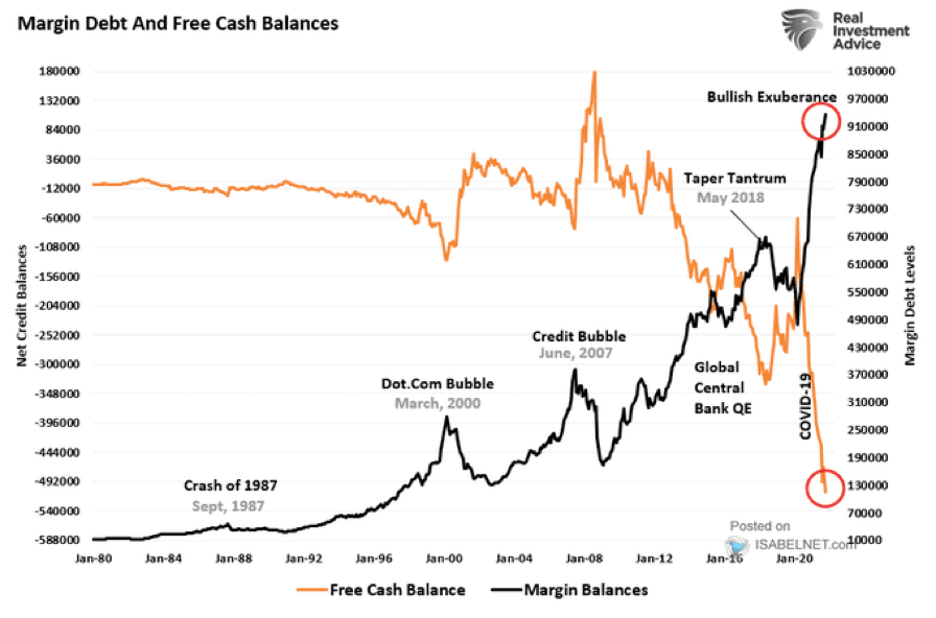 To be clear, I'm not calling it a market top. As I wrote yesterday, I'm very bullish on the economy, making me think this bull market still has room to run.

But it's getting long in the tooth, so I'm very happy to be holding quite a bit of cash right now...