1) I don’t think it’s because they’ve been listening to my repeated appeals, but nevertheless it’s good that retail investors appear to be coming to their senses – as this Wall Street Journal article notes: Individual Investors Retreat From Markets After Show-Stopping Start to 2021. Excerpt:

Individual investors kicked off 2021 at a sprinter’s pace. Now, they are finally showing signs of fatigue.

Trading activity among nonprofessional investors has slowed in recent weeks after a blockbuster start to the year, with the group plowing less money into everything from U.S. stocks to bullish call options. Daily average trades for at least two online brokerages have edged down from their 2021 highs. Across the industry, traffic to brokerage websites, as well as the amount of time spent on them, has fallen.

The decline in enthusiasm marks a sharp reversal from just a few months ago, when individual investors’ frenetic activity took center stage in financial markets. As shares of “meme stocks” soared in January, millions of small investors piled in, kicking an already robust retail-investing trend into overdrive. In a mania unlike anything market observers had ever seen, individual investors sent stocks like GameStop (GME) soaring, pushing brokerage platforms to the top of app-store rankings. Trading volume surged so much that many brokerages struggled to keep their platforms smoothly running.

Driving the recent pullback, individual investors and analysts said, is a series of factors, including concerns about the volatility among growth stocks – a group in which small investors tend to be heavily invested. Since Feb. 12, when the technology-heavy Nasdaq Composite hit its most recent record, individual-investor favorites including Tesla (TSLA), NIO (NIO), and Apple (AAPL) have each fallen more than 9%…

On March 26, individual investors purchased about $772 million of U.S. equities on a net basis, a 60% decline from the almost $2 billion reached in just one day on Jan. 29, at the height of the meme stock craze…

Meanwhile, analytics company SimilarWeb, which tracks desktop and mobile traffic to brokerage websites, found that companies across the industry experienced steep declines in traffic in March, compared with February. Robinhood Markets, for example, saw about a 35% drop in traffic, according to SimilarWeb, whose data doesn’t capture traffic via apps.

Sadly, however, the primary reason for the sharp decline in trading is almost certainly that these investors have gotten hammered, as I warned…

Consider my “Short Squeeze Bubble Basket.” When I named these 25 stocks and called their top (almost to the hour) in my January 27 e-mail, they had a combined market capitalization of $159 billion. As of yesterday’s close, a mere 10 weeks later, the basket is down by an average of 40%… meaning the shareholders of these companies have lost a staggering $63 billion (worse yet, the actual number is surely higher due to leverage/options)!

There’s no way to know for sure, but I’d bet my last dollar that the vast majority of these losses weren’t borne by hedge funds, institutions, or other professional investors, but rather naïve newbies who (as is always the case) got sucked into a gigantic bubble right at the top.

No wonder they’re trading less after such a shellacking!

2) One of my favorite columnists, Bloomberg’s Matt Levine, did a nice job in his newsletter yesterday, Archegos Appeared, Then Vanished, of tying together all the loose threads in the mind-boggling implosion of Bill Hwang and his Archegos Capital Management. He concluded:

But I suspect it mostly matters because it makes the story more exciting. This is not a story of a big famous hedge fund getting blown out of its giant positions. It’s a story of a big totally unknown hedge fund (fine, family office) getting blown out of its giant positions. You got the pleasure of discovering that Bill Hwang exists, and “was worth more than well-known industry figures like Ray Dalio, Steve Cohen and David Tepper,” at the exact moment you got the further excitement of learning that he lost all of it on wild levered bets. Because he did everything on swap, as far as most people are concerned Bill Hwang went from nothing to $20 billion and back to nothing in a single news cycle.

It reminds me of something Warren Buffett once said about margin/leverage: “If you’re smart, you don’t need it, and if you’re dumb, you shouldn’t be using it.”

3) This part of Levine’s column caught my eye because it captures one of the main reasons why we recommended investment bank Goldman Sachs (GS) rather than one of its peers to Empire Stock Investor subscribers in December 2019 (since then, the stock is up 44% versus 26% for the S&P 500 Index) – Goldman is ruthless about managing risk:

The basic dynamic of Archegos’ margin liquidation is that Goldman Sachs Group and Morgan Stanley (MS) blew out Hwang’s position in a series of big block trades on Friday, March 26. Those trades got a lot of attention, spooked the market, brought down the prices of Archegos’ holdings, put pressure on its other banks, and ultimately led everyone to blow Archegos out.

But Goldman and perhaps Morgan Stanley were fine. The blocks were done at discounted prices, but prices that seem to have been above (or at least near) the amounts that Goldman and Morgan Stanley had advanced to Archegos. Goldman has said that the Archegos unwind “will likely have an immaterial impact on its financial results.”

The other banks sold later and got worse prices. Part of their problem seems to be that they were too nice and tried to cooperate with each other. Bloomberg reports:

Emissaries from several of the world’s biggest prime brokerages tried to head off the chaos by holding a call with Hwang before the drama spilled into public view Friday morning. The idea, pushed by Credit Suisse, was to reach some sort of temporary standstill to figure out how to untie positions without sparking panic, the people said.

But any agreement was elusive, and by Thursday night, some banks had shot off notices of default to Archegos to seize collateral and potentially shop it to buyers to contain the banks’ potential losses, the people said. Yet even then, it wasn’t clear when terms with Archegos would allow sales to proceed, one of the people said.

Soon came the finger-pointing over who was breaking ranks, the people said. Some emerged from the talks suspicious that Credit Suisse wasn’t fully committing to freezing sales. By early Friday, rival banks were taking umbrage after hearing that Goldman planned to sell some positions, ostensibly to assist Archegos. Morgan Stanley began drawing public attention with block trades.

As is so often – not always! – the case, the market rewarded absolute unsentimental ruthlessness here. A bunch of prime brokers got in a room to give speeches about working together and preserving value and not artificially depressing prices, and the Goldman representative was texting colleagues under the table “SELL EVERYTHING!” Goldman was right.

That’s not to say Goldman always gets it right. The company had a total failure of risk control in the 1MDB scandal (deliciously documented in the book, Billion Dollar Whale: The Man Who Fooled Wall Street, Hollywood, and the World). And Goldman made one of the worst stock sales ever, as this tweet notes: 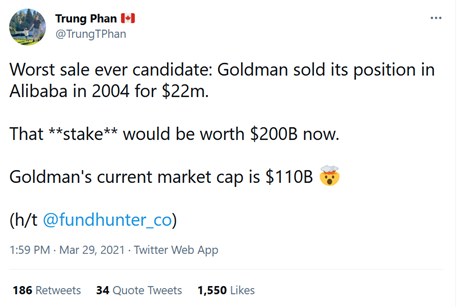 But I can say as a long-time observer and client of more than a decade (Goldman was my prime broker for more than half of my hedge fund’s 18-year existence) that the firm consistently attracts more than its share of the smartest people on Wall Street and is tightly managed, with a particular focus on risk control. This is important to understand if you’re going to invest in an investment bank, which is essentially a black box to outsiders (and even, often, insiders)!

4) There’s a lot of controversy about “vaccine passports” (for example, see this article: Israel’s “green pass” is an early vision of how we leave lockdown), but like the idea or not, I think they’re coming, as this article notes: COVID-19 Vaccine Passports Are Coming. What Will That Mean?

I just signed up for a New York state Excelsior Pass. Here’s what it looks like in the app I just downloaded on my phone: 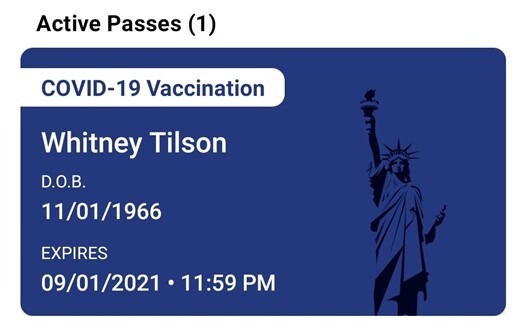 You can learn more and, if you’re a New York resident, register on the New York state website here. Excerpt:

Businesses and venues can scan and validate your pass to ensure you meet any COVID-19 vaccination or testing requirements for entry. Along with your Pass, you’ll be asked to show a photo ID that shows your name and birth date to verify that the Pass belongs to you. Adults may hold passes for accompanying minors.

Once you and your party enter an establishment, you will still be asked to follow State and CDC guidance regarding social distancing, face coverings and hand hygiene.

Participation in Excelsior Pass is voluntary. New Yorkers can always show alternate proof of vaccination or testing, like another mobile application or paper form, directly at a business or venue.

Lastly, here’s an article about it: New York Debuts Nation’s First Vaccine Passport – Here’s What You Need to Know.