1) I have mixed feelings about this: Individual-Investor Boom Reshapes U.S. Stock Market. Excerpt:

It’s one of the year’s biggest market stories: Mom-and-pop investors have fallen back in love with stocks, lured by free trading apps, a resurgent bull market led by technology companies and a pandemic that has left millions of Americans at home with little to do.

New data show a number of ways in which the individual-trading boom has reshaped the U.S. stock market. Here are five takeaways:

I’m all in favor of investing in stocks being made accessible at low cost to a wide range of investors… but I worry that a lot of novices are getting in over their heads and will be crushed because they’re doing crazy things like speculating in options and the stocks of bankrupt companies.

2) Speaking of which, I don’t know why the U.S. Securities and Exchange Commission (“SEC”) or the New York Stock Exchange (“NYSE”) don’t halt trading in the stock of bankrupt car-rental company Hertz (HTZ). The stock soared 143% on Friday after the company announced it secured commitments of $1.65 billion in debtor-in-possession financing.

While this likely staves off the near-term dissolution of the company, it doesn’t change the reality that there’s almost certainly no recovery for the equity – meaning the stock is worthless.

Sure enough, the Wall Street Journal article above highlights that Hertz is one of the stocks with the highest correlation between its share price and its popularity on trading app Robinhood: 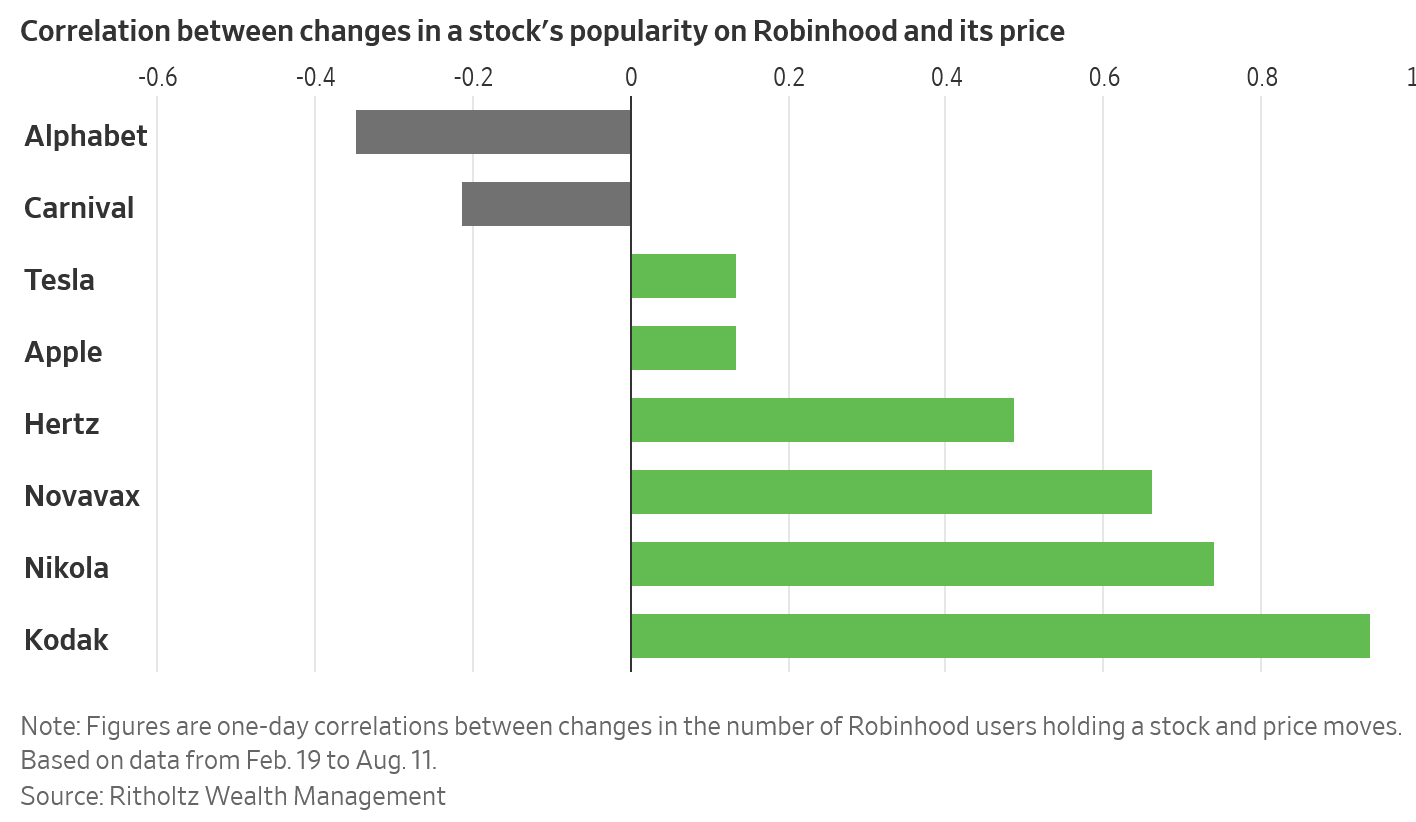 3) Here’s another risk I’ll bet most Robinhood investors aren’t even thinking about: Robinhood Users Say Accounts Were Looted, No One to Call. Excerpt:

It took Soraya Bagheri a day to learn that 450 shares of Moderna had been liquidated in her Robinhood account and that $10,000 in withdrawals were pending. But after alerting the online brokerage to what she believed was a theft in progress, she received a frustrating email.

The firm wrote it would investigate and respond within “a few weeks.” Now her money is gone.

Bagheri is among five Robinhood customers who recounted similar experiences to Bloomberg News, saying they’ve been left in limbo in recent weeks after someone sold their investments and withdrew funds. Because the wildly popular app has no emergency phone number, some said they tried in vain to intervene, only to watch helplessly as their money vanished.

4) While Robinhood traders are undoubtedly boosting the prices of a handful of speculative stocks like Hertz, Eastman Kodak (KODK), and Nikola (NKLA), they’re likely not affecting the overall market, as this article notes: No, Robinhood Traders Aren’t Affecting the Stock Market. Excerpt:

Yes, Robinhood traders are impacting Kodak, but that doesn’t imply they are materially impacting larger stocks (like Apple or Amazon) or the stock market overall.

This illustrates that there seems to be some stocks in which the Robinhood effect is real, but for most stocks this isn’t true. Popularity on Robinhood is not predictive of price changes, but it is predictive of what will make the headlines.

5) Speaking of electric-truck developer Nikola, the stock dropped 16% on Friday on this news: Nikola Shares Plunge After CEO Says Startup Can Go It Alone. Excerpt:

Nikola shares sank as much as 16% in Friday trading after the electric-truck startup’s chief executive officer said he sees a path for his company even if it can’t come to terms with General Motors (GM) on a proposed strategic partnership.

Talks between the two companies are ongoing, but if a tentative technology-sharing and manufacturing deal announced last month falls apart, Nikola will revert to a “base plan” without GM’s help, CEO Mark Russell said in an interview late Thursday.

“We have the ability and we have a base plan of doing it ourselves. If we have a partner, that just enables us to consider going faster and helps reduce the risk,” he said. “We’ve proven that over the years that we are a partnership company when those things are available to us.”

The Phoenix-based company’s relationship with its would-be partner has been the subject of intense scrutiny since Nikola and its founder and former Chairman Trevor Milton were accused of deception. Both the company and Milton have denied those claims.

Mark my words: GM is going to drop Nikola like a hot potato!

6) It’s hard to explain… but I really enjoyed this collection of photos, charts, and short blurbs compiled by blogger David Perell: Coolest Things I Learned in 2019.