1) It's earnings season for the big banks this week.

Citigroup (C), JPMorgan Chase (JPM), and Wells Fargo (WFC) reported this morning... Goldman Sachs (GS) is up tomorrow... and Bank of America (BAC) and Morgan Stanley (MS) round things out on Thursday.

The sector has been decimated this year. The Invesco KBW Bank Fund (KBWB) is down 35% year to date, vastly underperforming the S&P 500 Index: 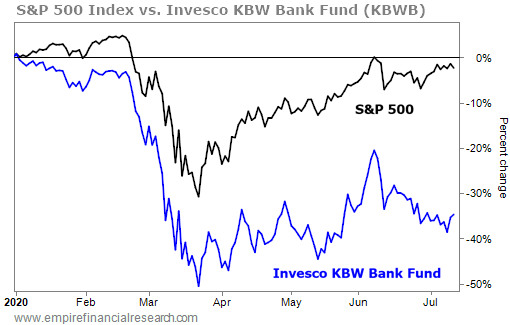 I think the sell-off is way overdone, however, which is why my team and I recommended Goldman Sachs and American Express (AXP) in our Empire Stock Investor newsletter (you can sign up for it right here and gain access to the entire portfolio – it's only $49 for the first year).

In addition, near the market lows in mid-March, I invested 2% of my personal account in a basket of seven other big banks (to prevent conflicts of interest, I'm not allowed to own the stocks recommended in any Empire Financial Research newsletters). Since then, they've risen 12% collectively – not bad, but well below the 25% return of the S&P 500 over the same period.

2) The bear case for the banks is well-known: big losses due to the coronavirus, heavy regulation, low interest rates, etc. These two articles in yesterday's Wall Street Journal capture the negativity well:

Meanwhile, earnings from lending and interest are under big pressure. On the plus side, thanks to a historic dash to cash by companies and individuals willing to park money in noninterest-bearing accounts, funding costs will be low. On the flip side, interest collected will suffer. For example, while banks stand to reap billions in fees on Paycheck Protection Program loans, much of that income will likely be spread over the life of the loans. Plus, those loans pay only 1% in actual interest, which won't even materialize if many are forgiven.

It isn't just about the margin earned on lending, either. Despite the surge in PPP loans, banks' loan books might be shrinking. Sharply falling consumer-loan balances, notably via cards, and the end of a wave of corporate credit-line drawdowns put pressure on banks' total interest income. Indeed, one consequence of a surge in capital-markets activity is that companies can pay down those bank loans.

Fed figures across U.S. banks tracked by Brian Foran at Autonomous Research show deposits still growing at an annualized pace of 17% over the prior month at the end of June. Loans, however, are shrinking at an annualized 19% pace over the past month. That isn't a favorable formula for bankers.

Second-quarter results for the biggest U.S. banks won't be pretty.

The novel coronavirus has wreaked havoc on the economy – and the banks' operations. Lending money has become a much riskier proposal, forcing banks to put aside billions of additional dollars in case consumers and businesses stop paying. And early this year, the Federal Reserve cut interest rates, which was meant to shore up the economy but also lowered the margin banks can make on any lending they do.

"When we look at our earnings, last quarter was obviously quite weak. You'll see the same thing this quarter," Charles Scharf, chief executive of Wells Fargo, said in late May.

His is the only big bank expected to swing to a loss in the latest quarter, according to analysts polled by FactSet.

Others are expected to remain profitable but see big declines. JPMorgan Chase and Citigroup, which will both report Tuesday alongside Wells Fargo, are forecast to post at least 60% drops in income from a year ago.

The concern has shown in bank stocks, which have lagged behind a surging market rally over the past three months.

3) My friend Doug Kass of Seabreeze Partners articulates the bull case for the sector well in this missive that he published yesterday:

The Case for Bank Stocks Remains Strong and Intact

While we have seen a period of underperformance for the bank stocks – in a relatively narrow trading band – since my cautionary post of five weeks ago, the intermediate term industry prospects remain very attractive.

I have spent a lot of time in my Diary describing the ability of the bank industry to absorb COVID-19 related loan losses – culminating in a column, "Financial Stocks, Soros, and Me."

If the worse economic expectations are not realized, bank stocks are extraordinarily inexpensive – on almost any time frame – relative to other market sectors.

Investors are fearful of:

I continue to think, that in the main, these concerns are not justified as bank industry profitability will begin to improve from these second quarter reports and most large money center banks, with the exception of Wells Fargo, will increase their tangible net worth in 2020 over 2019.

A key 2Q feature will be much higher credit losses. Nevertheless, it is my expectation that, with the exception of Wells Fargo, 2Q 2020 loan loss provisions will not exceed 1Q 2020 actual provisions.

A number of factors suggest loan losses will be easily absorbed.

Most importantly, as contrasted with The Great Decession (2008-09), industry leverage is much lower today. A decade ago banks were leveraged (assets to capital) 25x-30x. Today bank leverage is about 10x and the industry's steady and improving profitability of recent years has produced a bank sector that is flush with liquidity and excess capital.

The fundamental difference in vulnerability cannot be understated. A bank in 2007 that is levered 30-1 and takes a 2% hit to assets will lose 60% of its equity.

As well, as a result of a steady stream of strong profits over the last five years, balance sheets are strong. Even Wells Fargo, which took a $3 billion loan loss reserve in the first quarter, can still withstand another $21 billion of credit losses before approaching regulatory minimums.

But the strength of banks doesn't stop at strong balance sheets capable of absorbing credit problems – the collateral held in the event of loan defaults is exceptional, absolute and relative to a decade ago.

The most obvious example of collateral strength can be seen on the consumer mortgage ledger:

Home prices fell by over 30% 12 years ago – with leveraged consumers, elevated home prices and high long to value mortgages – and most banks suffered with large mortgage loan losses as consumers walked away from their homes as their mortgages produced an underwater condition (adjusted for large untenable mortgage sizes) relative to the then current home prices.

It's a different ballgame today with strong household net worths, contained home prices and appreciation, low loans to value and home equity representing a majority of household wealth, so the consumer today vs. a decade ago will protect his home equity.

For a number of obvious reasons, the banking industry is regulated. The government provides banks with liquidity and it insures deposits – in return it conducts stress tests which provides the Fed with an opportunity to intervene on capital plans (buybacks and dividends).

Finally, it is also important to recognize that the Fed fully recognizes the role banks have in the transmission of credit. A very stringent capital enforcement would limit lending – something that most regulators, and the Administration, are not likely in favor of.

For now I only see Wells Fargo's dividend in jeopardy. However, even in the event of mandated dividend cuts (in the event that the COVID-19 situation worsened) I would remind subscribers that it will not likely have much impact on bank's long term results. If a bank accrues a dollar to book value, whether that dollar is paid out today or retained or paid out in a couple of years, barely changes the discounted value of the bank's franchise.

Low interest rates ("forever") have pressured net interest income – but the connection between spreads and return on capital is loosening.

What is not commonly understood is that fee income as a percentage of revenues has dramatically expanded as most banks have changed their profiles and have reduced their dependency on spreads – in some cases it represents more than 50% of bank revenues.

Moreover, the unprecedented economic backstopping and policy (near zero interest rates) – in the form of consumer checks and paycheck protection, enhanced transfer payments, forbearance programs – has kept households liquid and healthy – and so essential to a bank lender. By buttressing the consumer, the knock on impact of a period of lower spreads, until the system clears and the economy rebounds, seems to be an acceptable policy, condition and alternative.

Banks today are materially underleveraged relative to the past. This observation also applies to home ownership (the mortgage business is the foundation of many banks) – consumers no longer are as leveraged to homes as loans to value are quite low and home equity quite high – both absolutely and relative to 12 years ago.

With large, excess capital positions capable of absorbing near unprecedented credit problems, they're healthy and positioned to survive the 2020 economic hit and are poised to absorb anticipated credit losses.

Despite the severity of the economic contraction over the last four months, most large money centers will add to book value in 2020 over 2019.

Banks are materially underleveraged and better positioned relative to The Great Decession of 2008-09.

The stocks are extraordinarily inexpensive when viewed against (price to) capital, earnings power and (burgeoning) deposits which form the basis of a bank franchise's value – all at near or below the metrics of 2008-09.

After the recent five-week period of underperformance, I would not be surprised if bank stocks respond favorably to second quarter earnings reports.

The intermediate term outlook is as good as ever.

Thank you for sharing, Doug!