I'm betting on America â and humanity; I'm buying today; Most countries are bending the curve; Advice to my friends; Matt McCall's free webinar tonight; A short day yesterday â only 11 hours at the field hospital

1) I came across an old quote today by Berkshire Hathaway (BRK-B) CEO Warren Buffett: “A great investment opportunity occurs when a marvelous business encounters a one-time huge, but solvable problem.”

You want to know the marvelous business that’s on my mind?

THE UNITED STATES OF AMERICA!

And you know what?

THE CORONAVIRIS IS A SOLVABLE PROBLEM!

If China, South Korea, Hong Kong, and Singapore can solve this problem, do I think we Americans can?

I’m really inspired by the past three days (and a fourth day today, and a fifth day tomorrow…) I’ve spent volunteering to help the folks at Samaritan’s Purse set up an emergency field hospital in my back yard, directly across the street from my apartment building in Central Park.

Thanks to herculean efforts, it’s now beginning to handle the overflow of coronavirus patients swamping the emergency room at Mt. Sinai Hospital.

I remember thinking to myself in early February, when I watched the 45-second time-lapse video of China building a 1,600-bed hospital in Wuhan in only 10 days: “Wow, I wish we could do something like that…”

WELL WE CAN, BECAUSE WE DID!

And I know this because I was there and helped (in a very tiny way) make it happen! (See below for a description and pictures of my day yesterday.)

It’s not as big as the one in China – but it only took three days to turn an empty field into a world-class hospital, able to treat even the most critically sick patients!

I’m now even more confident than ever that the gloom-and-doomers who think this virus is going to send us back to the Dark Ages are totally wrong.

Have they studied no history whatsoever?

We Americans can be slow to awaken – and we were indeed disgracefully complacent and asleep at the switch in this case, one of the greatest failures in our history – but when we finally get serious, look out!

You want to bet against America (and all of humanity)?

But I’ll bet against you all day long, and we’ll see who’s proven right a year from now…

And I’m putting my money where my mouth is… Over the past month, I’ve shifted my family’s total net worth (excluding the value of our only non-liquid asset, our apartment) from 15% stocks to 63% by the end of last week, 67% on Monday, and 70% this morning.

(That said, the stock market can go anywhere in the near term, so as I’ve said many times before, keep some “dry powder” and be careful – don’t speculate, trade like a maniac, or use leverage.)

2) Markets around the world are selling off because of more gloomy death estimates and President Donald Trump’s comment about a “painful two weeks” (I think he’s sandbagging, so he’ll look like a hero when things aren’t as bad as he warned).

But when I look at the latest data from around the world on new coronavirus cases and deaths, I see most countries looking like they are bending the curve: 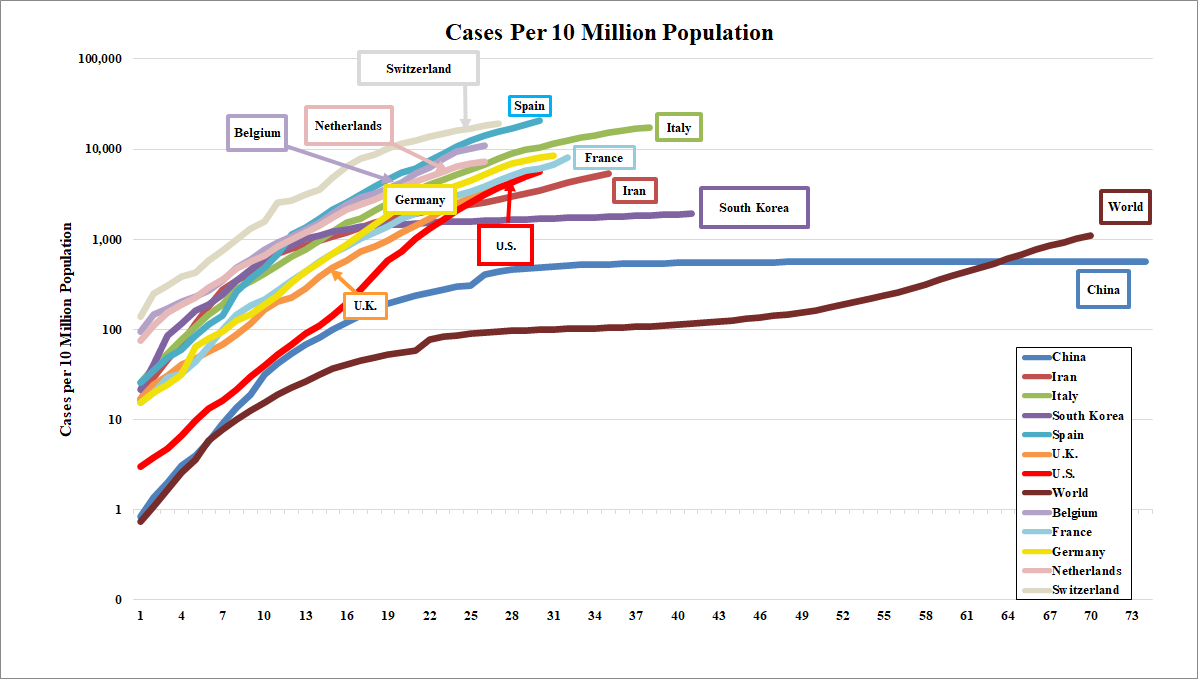 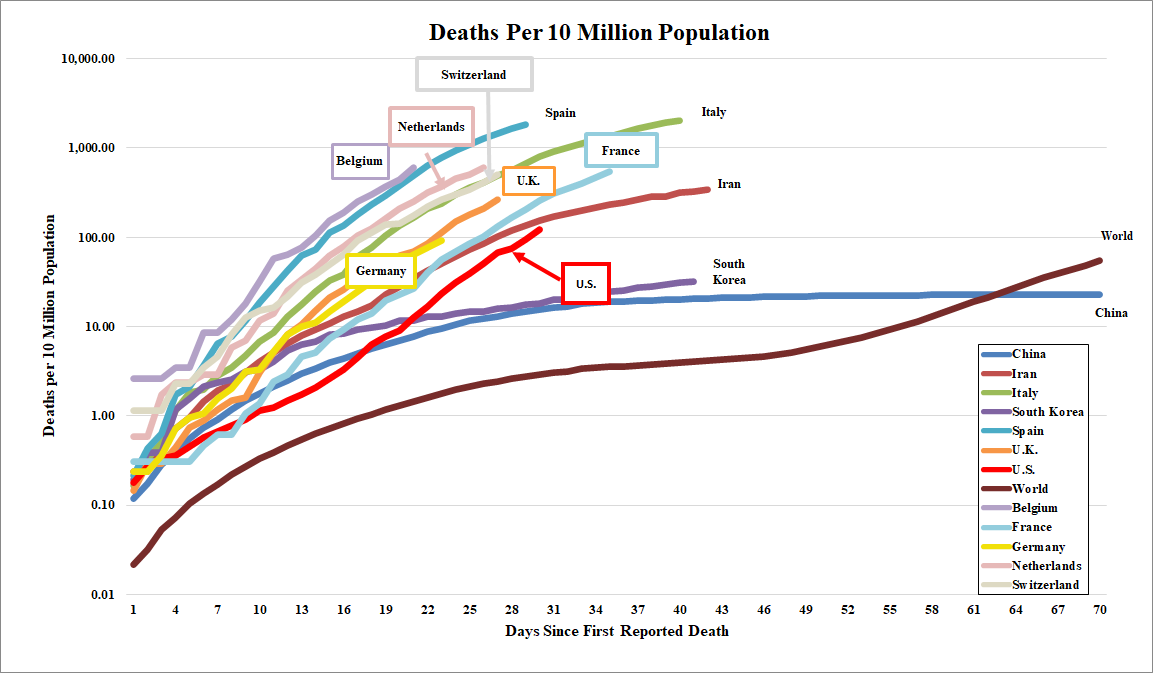 If you wish to subscribe to my coronavirus e-mail list to receive daily updates of this chart (and much more!), simply send a blank e-mail to: [email protected].

The advice I gave each of them was to turn off the television – the media is the ultimate lagging indicator (remember the global financial crisis?) – and start by putting together a simple spreadsheet showing their own entire financial picture. You can’t make good decisions until you have the facts in front of you.

Don’t compartmentalize. A dollar is a dollar, no matter which account it’s in. For example, the 70% number I cited above is based on all of my liquid assets: cash in my checking account, a short-term bond fund, my wife’s IRA, and my various retirement accounts.

Then, I told them you only need to do four things:

If you do these four things, you’re going to be fine!

4) If you’re looking for some great stock ideas, I recommend the ones I highlighted in my “10 Stocks to Buy to Profit from the Coming Market Upturn” report that I sent to Empire Investment Report subscribers last week. If you’d like to become one – and take advantage of 40% off the regular price – click here.

If you’re looking for great ideas in the small-cap arena, check out the free webinar at 7 p.m. Eastern time tonight that’s hosted by my friend Matt McCall – a senior analyst at our corporate affiliate InvestorPlace. Just for watching, he’ll share the name and ticker of one of his favorite stocks. Get the details here.

5) After 13 non-stop hours on Monday, yesterday was a short day helping set up the emergency field hospital – only 11 hours! I feel like a slacker though… I sat down for 15 minutes for lunch.

By the way, I’m aware that the founder of Samaritan’s Purse, Franklin Graham, has said things that are deeply hurtful to the LGBTQ community. I’ll comment further on this difficult issue in a future e-mail and just say this for now…

I am convinced that the field hospital that the group is building – which we need really badly right now – is first-class, and that staff will provide excellent care to all patients irrespective of their religion, and will not proselytize (I can assure you that no volunteers have been asked to sign their mission statement). At this time of crisis when Samaritan’s Purse is saving lives and treating everyone, it’s time we set aside our ideological and religious differences and get to the work at hand. We can argue those differences later…

If you’re interested in the details of my day yesterday, read on…

Katharine and I went over at 8:30 a.m. and met up with one of my buddies, Nick Jekogian, who’s a fellow dad at Katharine’s school. Here they are putting up police tape on the barriers on Fifth Avenue: 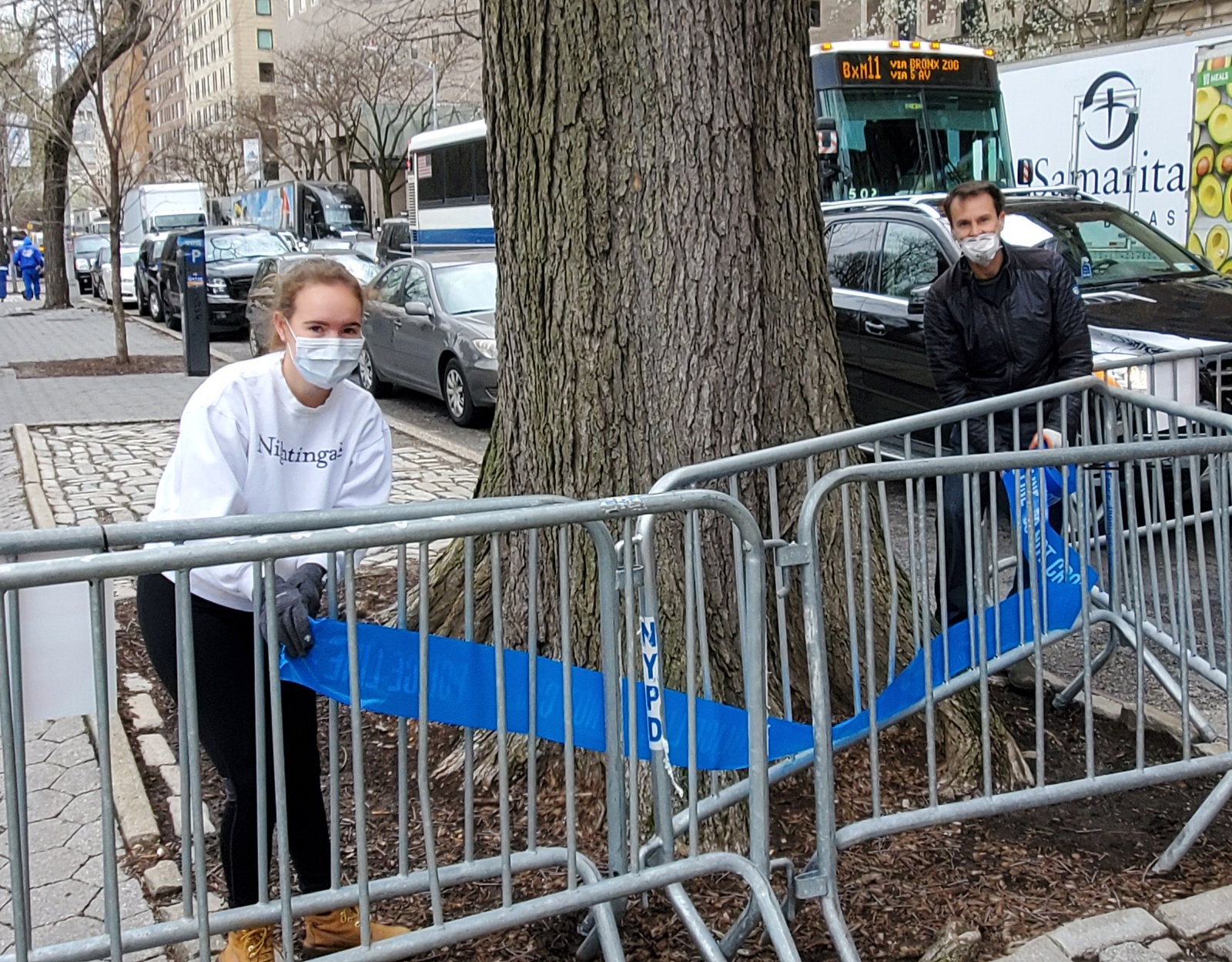 Then we spent hours and hours spreading and raking a third truckload of mulch to create walkways through the entire area (necessary because it’s been rainy and the field was rapidly getting muddy). Here’s the mound, already down to about half its original size: 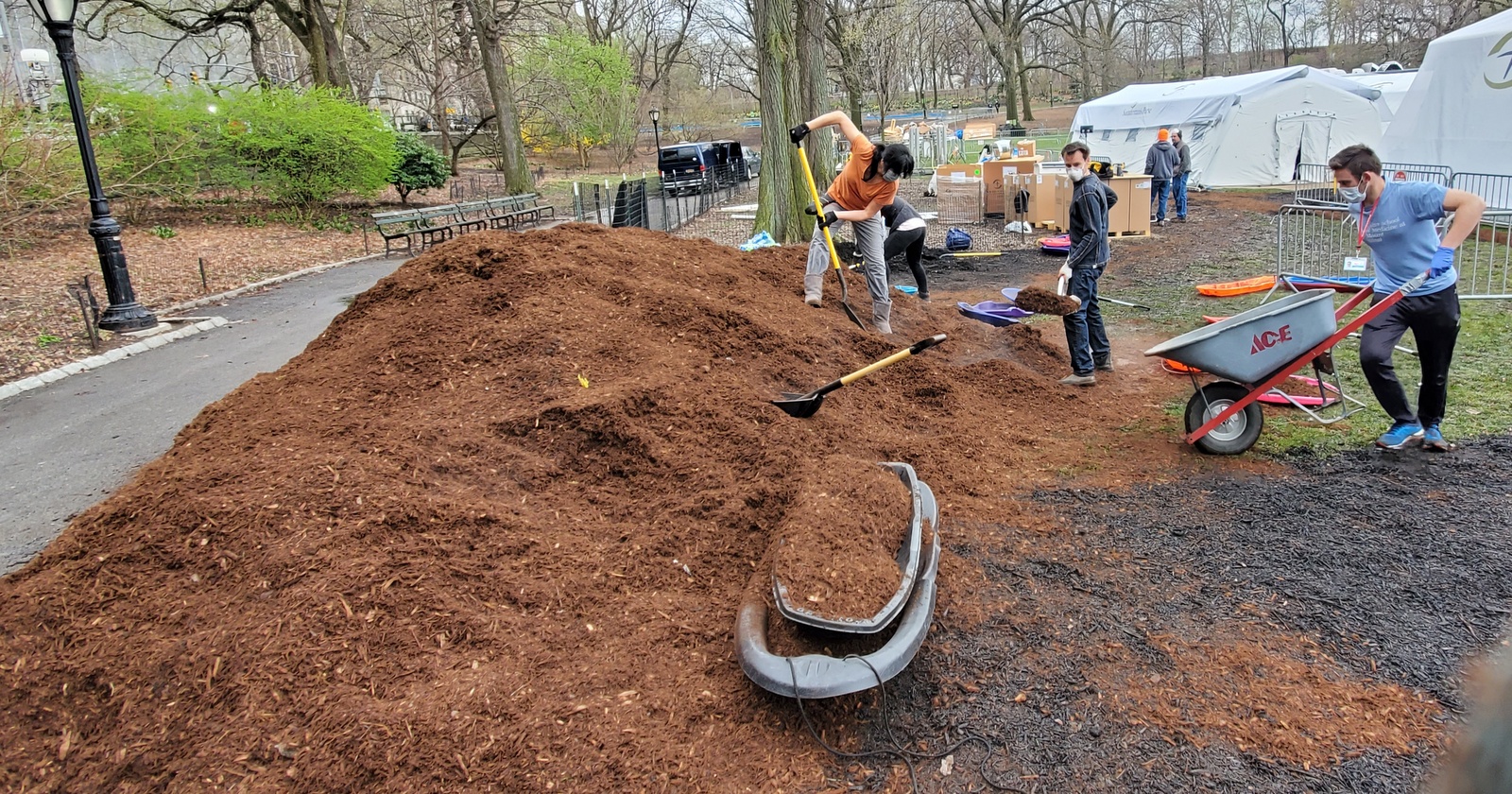 Note the two stacked sleds in for the foreground rather than the “saucers” we used yesterday. That’s because I came up with an even more brilliant idea this morning: the eight saucers I brought yesterday weren’t enough for all of the volunteers, so I went back to my building to get more. But there were only four so I grabbed 10 longer sleds – I figured they would be bulkier to carry, but better than nothing.

But then the handyman in my building said, “They have ropes tied to the front – you can pull them.” PURE GENIUS! Rather than carrying one small saucer, which was killing my back, I could load up two sleds, which held four times as much mulch, and pull them!

This picture shows my technique for filling the sleds: I knelt and used both arms to pull huge amounts of mulch onto it. This part was still backbreaking, but was much faster than using a shovel (like the guy next to me): 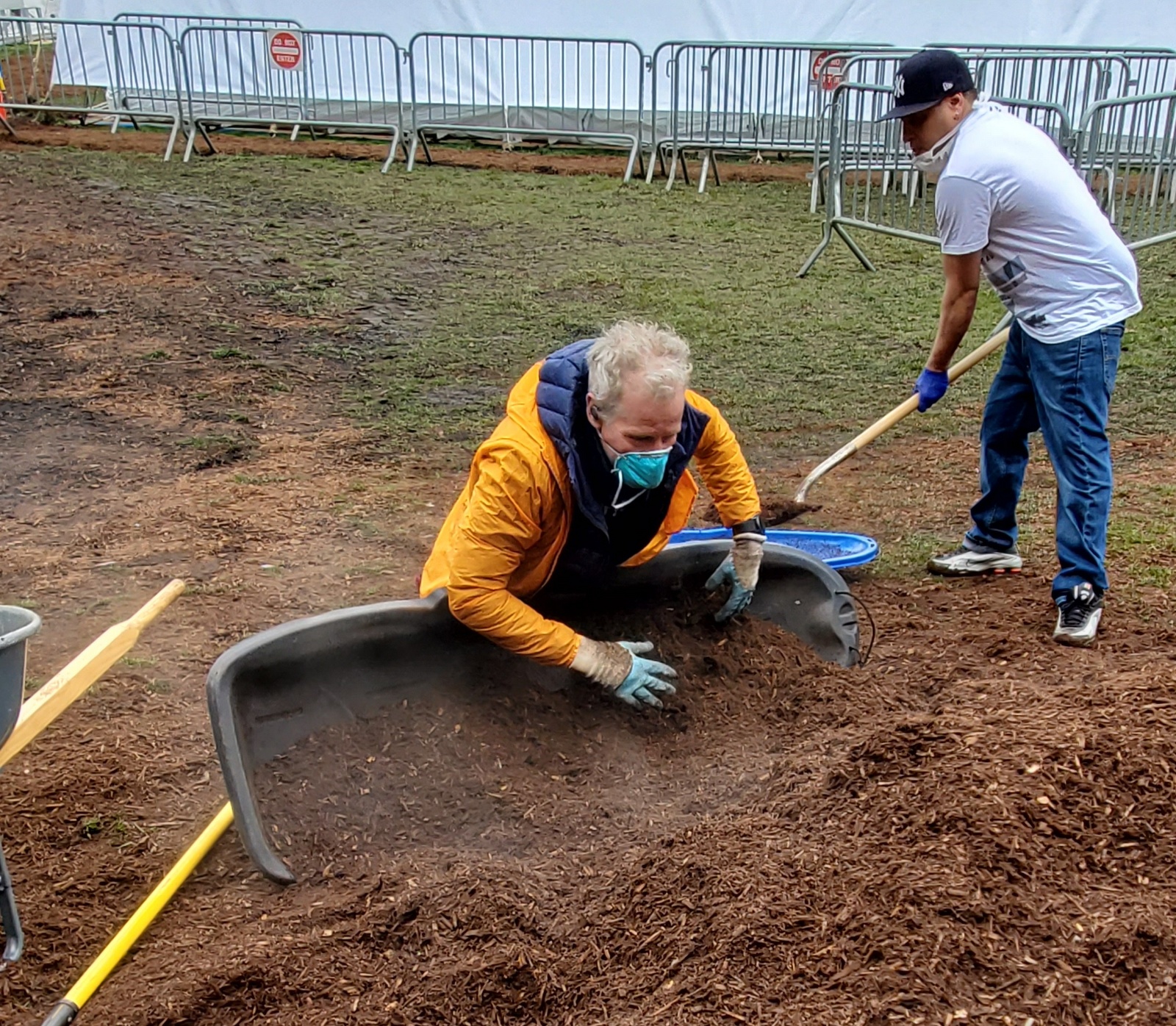 Here I am pulling two sleds of mulch: 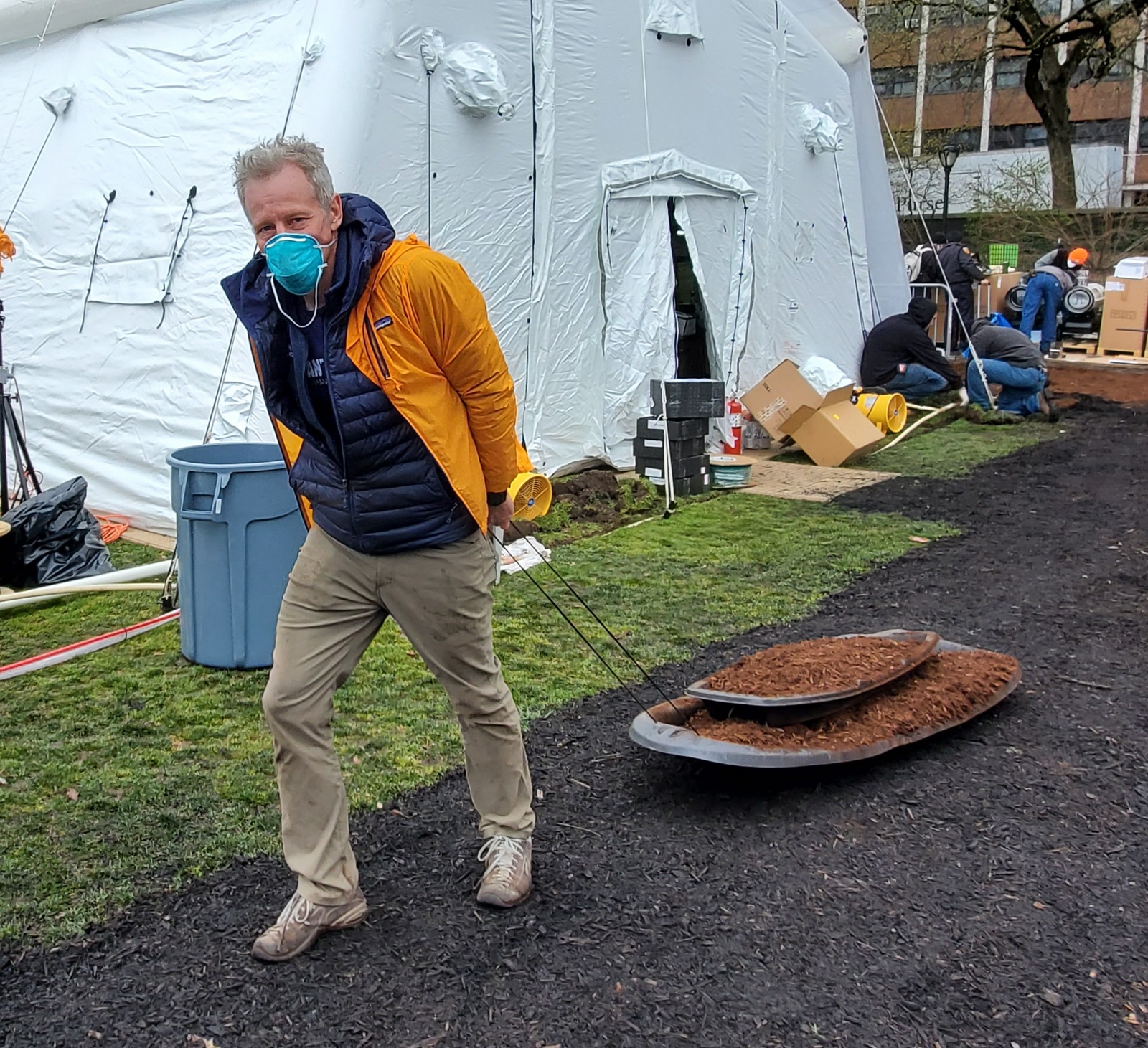 After we laid the mulch, we put down plywood and then nailed tar paper over it (which further killed my back!). Here’s Nick Pachetti, another one of my buddies who volunteered to join me all day: 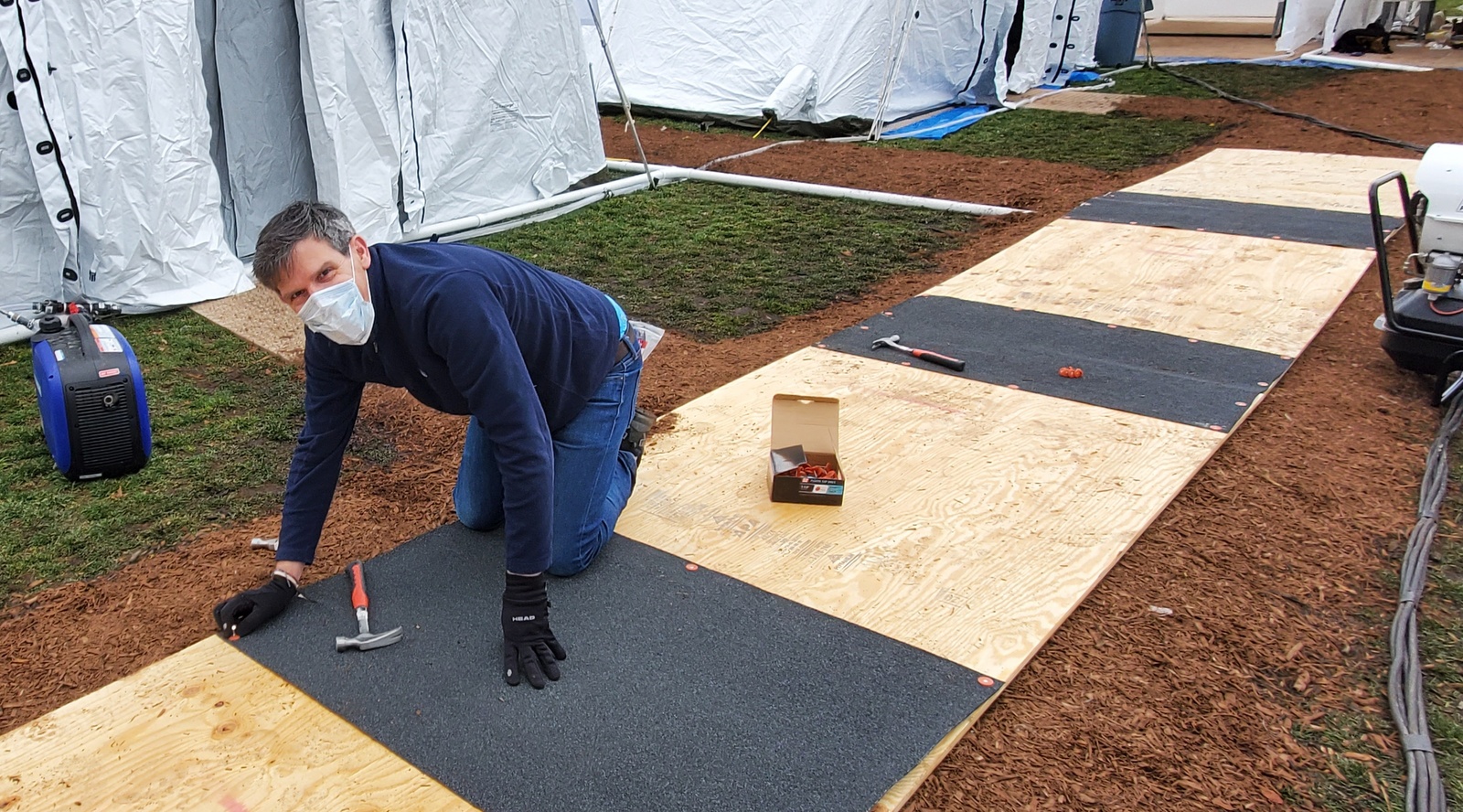 After they finished work and school (from home, of course), Alison and Katharine came out again and helped nail down the tar paper: 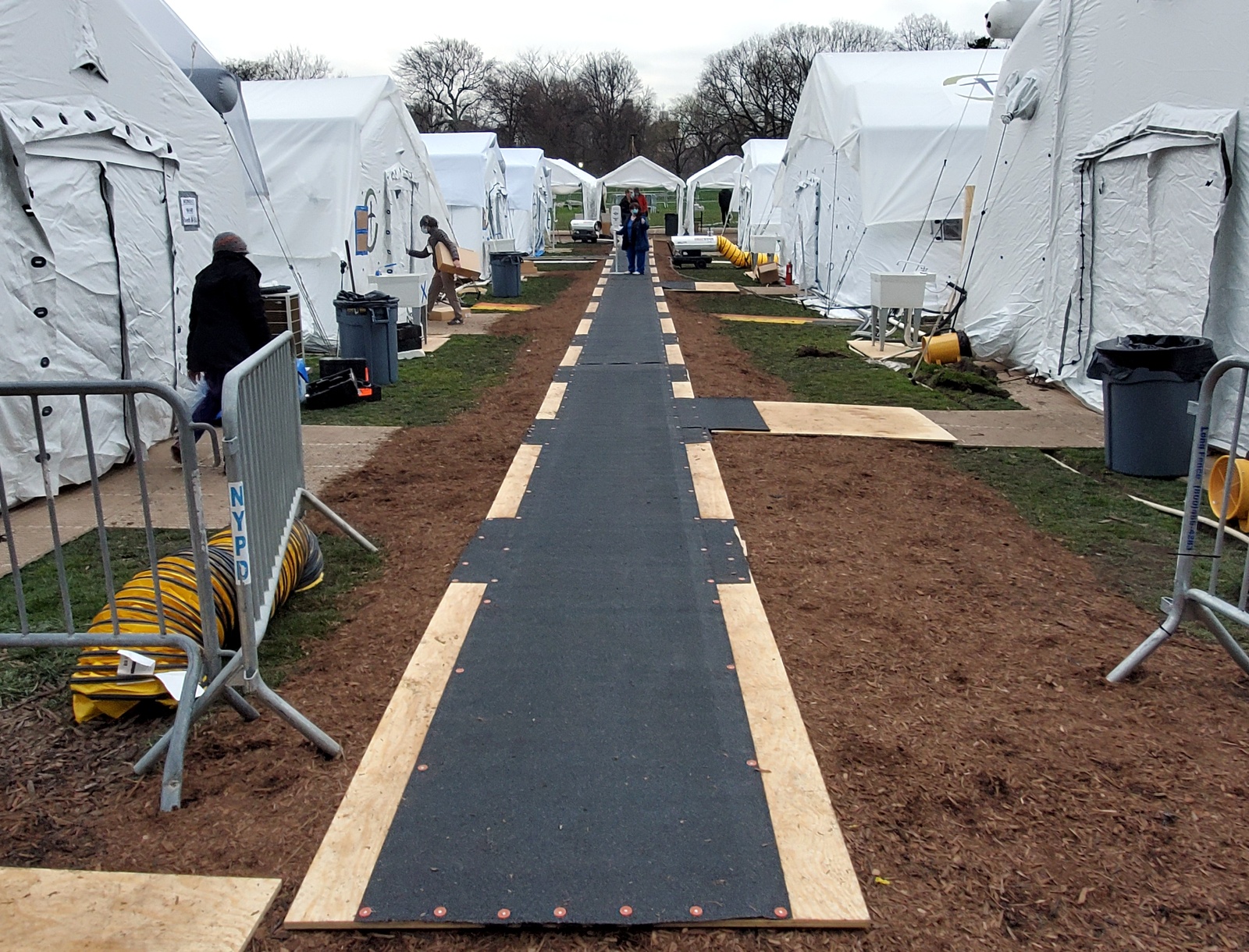 This stretcher on wheels, which will be transporting patients tomorrow, shows why the plywood is necessary: 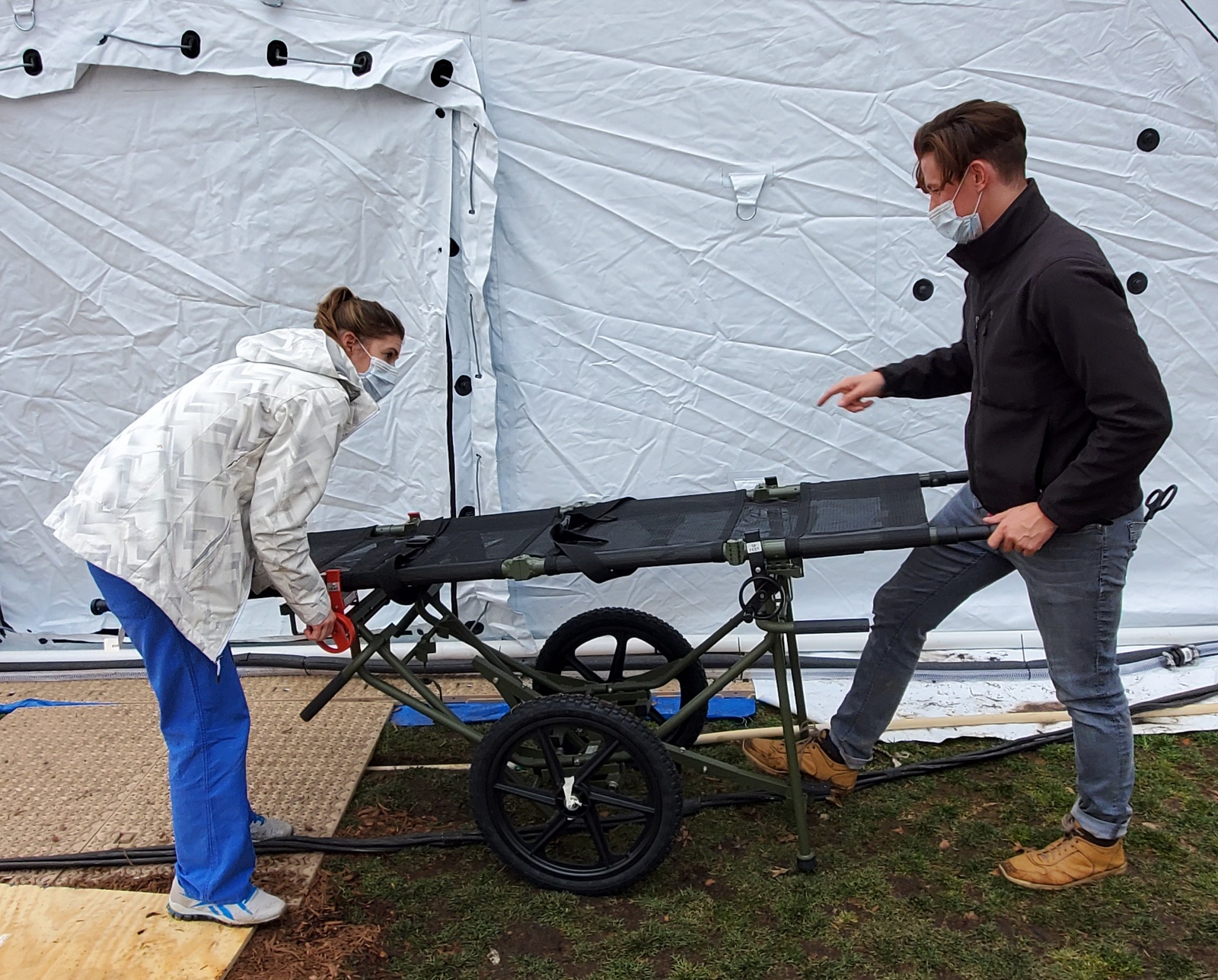 Here’s the inside of one of the tents: 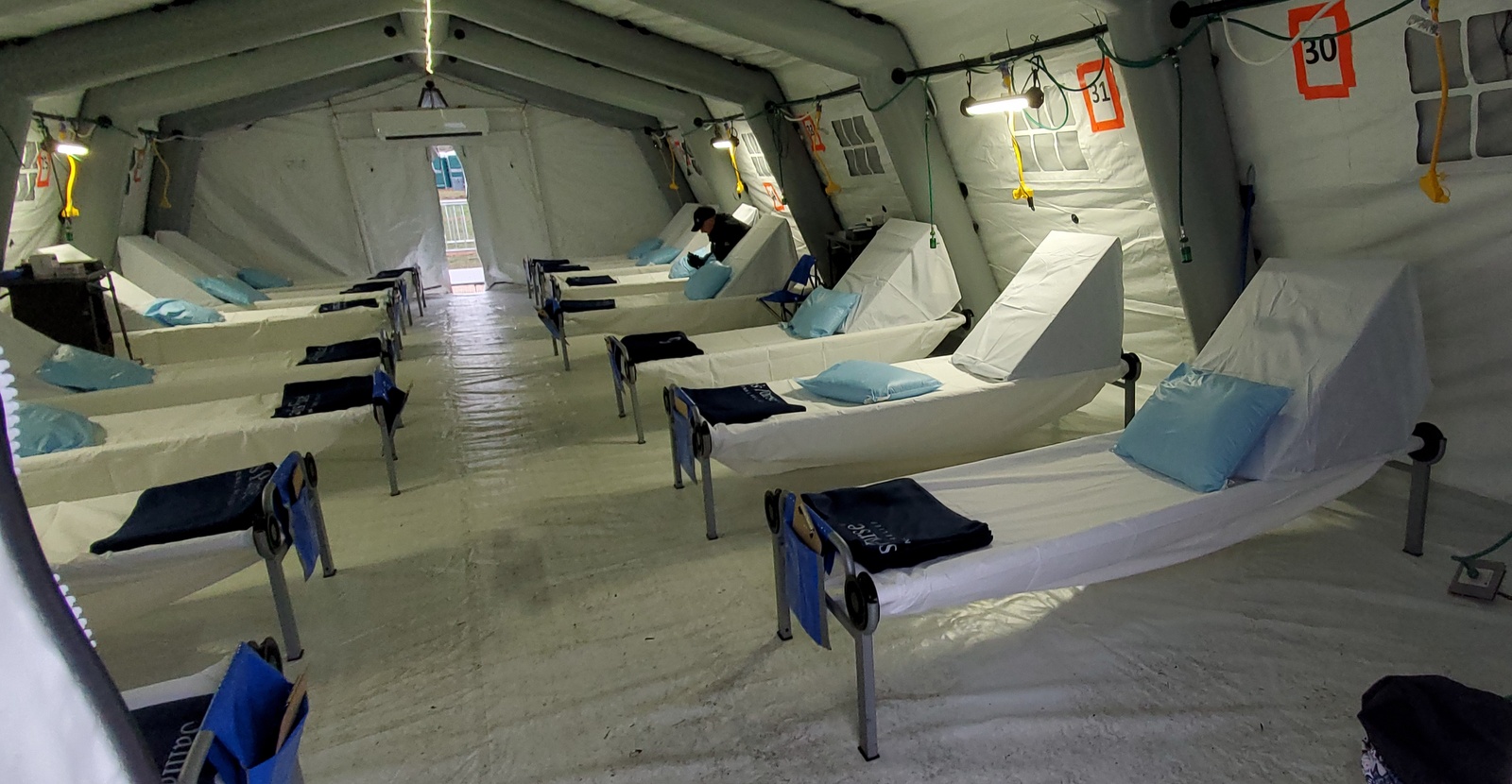 Lastly, to understand how personal and emotional this is for me, the field hospital is located at the bottom of the hill where I used to bring my daughters sledding when they were younger. Here’s a picture of Alison and Emily (who are now 23 and 20 years old): 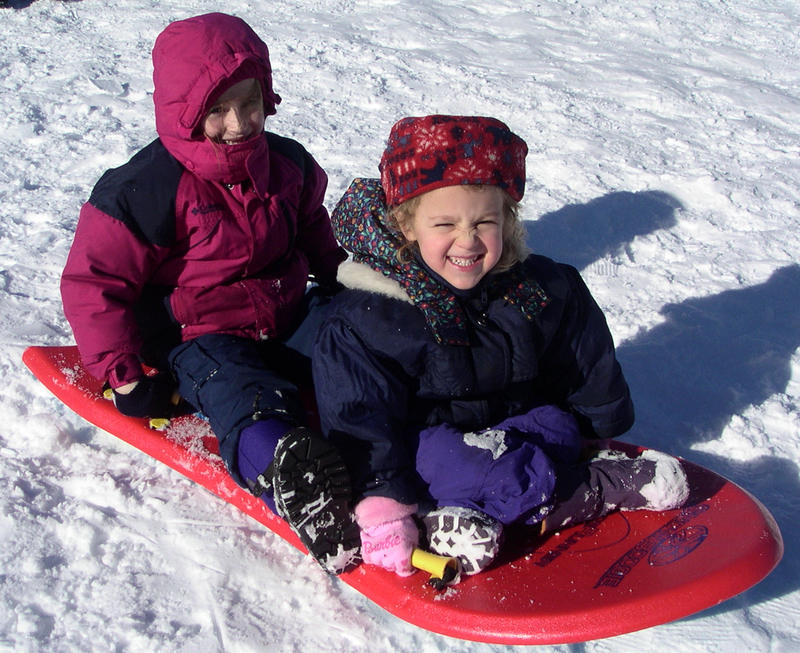 And here’s one of Emily and Katharine (with the most universally beloved member of our family, Rosie the Wonder Dog… I aspire, one day, that Susan and the girls will love me 10% as much as they love her – I think I’m at about 5% now): 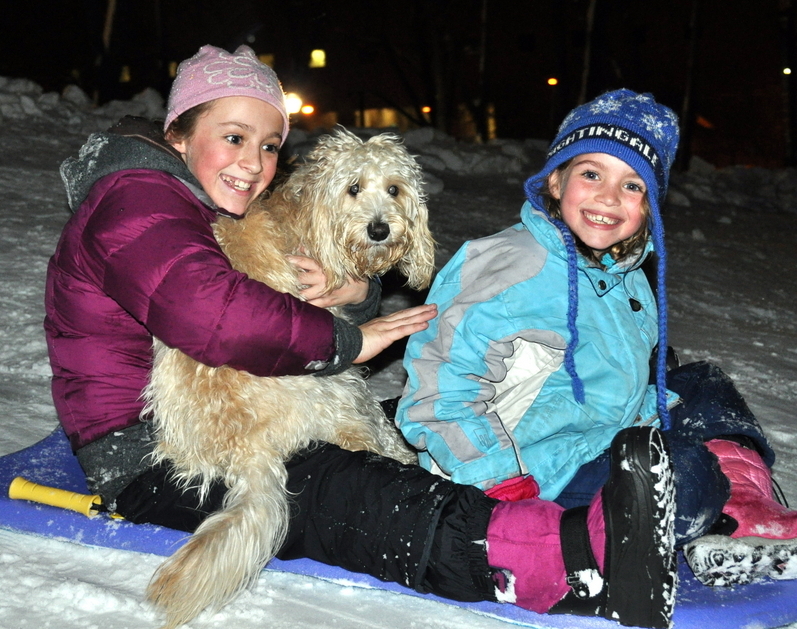