1. I enjoyed my day and a half at the ICR conference in Orlando on Monday and Tuesday. I wish, however, that I had found more investment ideas, but instead found mostly a bunch of crappy dying retailers like Stage Stores, Stein Mart, Ascena Retail Group, Vince, Build-a-Bear Workshop, and Chico’s FAS plus some popular but overvalued companies that have crushed short sellers like Five Below, Planet Fitness, Domino’s Pizza, Shake Shack, Chipotle, and Wingstop. The latter was trading at 12x revenues when I pitched it as a short at the Robin Hood conference a couple of years ago – and now trades at 19x revenues! A good lesson on the dangers of valuation shorts – but, mark my words, this stock is going to be a dud going forward.

If I were to pick one stock to pay up for, it would be Floor & Decor (FND). I first became aware of the company years ago when I was short Lumber Liquidators and saw that it was a formidable competitor with a far superior business model: 70,000 square foot superstores with a huge selection and inventory on hand (here is a link to their investor presentation). They have nearly 10% net margins, 30%+ returns on equity, consistent double digit comps, and are growth their store base 20% annually (currently 105 stores with plans to grow to 400). The stock has been cut in half in the last seven months, not due to any missteps by the company but rather concerns about the housing market. The stock, at 26x this year’s estimates, isn’t cheap, but if the company can sustain 20%+ EPS growth, which I think is likely, the stock will do well.

Lastly, I saw a bunch of cannabis companies: Tilray, Acreage Holdings, Cronos Group, Cresco Labs, MJardin Group and Green Growth Brands (which made the silly “bid” for Aphria). The good news for the sector is that there’s going to be a lot of growth and I didn’t detect any obvious frauds like Aphria. That said, these are tiny companies with absurd valuations – which is what happens during stupid bubbles. The smart money is investing in private companies and then making a fortune when they go public. Maybe there will be an opportunity for some bottom fishing if the carnage I expect comes to pass…

2. I continue to have a variant perception on the Brexit-related chaos in the UK (see: May’s Brexit Deal Failed. What Happens Now?). I think the historic defeat Theresa May suffered yesterday is the best thing that could have happened to Britain, as it increases the odds that there will be a second referendum, as which point enough citizens, having realized that they were sold a false bill of goods, will switch their vote and this idiotic Brexit idea will die a well-deserved death. (If only we could do a re-vote here regarding our historic mistake… )

3. The National Inquirer’s revelations about Jeff Bezos’ behavior and impending divorce have made for some entertaining reading (was he really dumb enough to send a d**k pic to his mistress?!), but the real question for me as a (small) Amazon shareholder is whether this should affect my view of the stock. I think only a tiny bit. What he does in his private life is his business, and it’s certainly not unusual for a middle-aged rich guy to have a midlife crisis, have an affair and dump his wife. That said, I found this post on ValueInvestorsClub very interesting:

I am pretty sure that Bezos is on TRT [testosterone replacement therapy]. It does wonders in that it helps with energy, body composition, and aggression for a guy of Bezos’ age. But I am kind of not surprised that Bezos got jacked in recent years and now he’s sending d*ck pics. TRT dramatically increases sex drive and is probably the culpit of the cheating. Ben Affleck was with Jennifer Garner for a long time and all a sudden he packed on a ton of muscle mass for the batman movie and he cheats.

Why does this matter? I think you have to calibrate these CEOs to what their decision making is when they are on TRT. I think they tend to be more confident and think with their johnny a bit more. Amazon is an absolute freight train moving in the right direction right now. What happens while growth slows and maybe America won’t tolerate a CEO being on TRT. It seems like a far fetched risk, but I think it’s important one to consider. The biggest risk in my opinion is that TRT alters your perception of risk/reward. It makes you more aggressive and hostile. So Bezos might have steered clear of certain risks in the past. TRT Bezos may take on that risk that he would’ve side stepped in the past. If you want to experiment with what elevated testosterone levels does to your decision making, go to the gym and do some really heavy squats or leg press. Now feel that surge of testosterone and see if you are more easily agitated and more aggressive.

I mean what guy do you know goes from looking like Bezos of the late 90s to Jeff “The TRT Terminator” Bezos of 2018. The guy has veins in his biceps. Heck, I only had veins in my biceps when I was 20, working out everyday and running 6 miles after lifting. https://www.reddit.com/r/nattyorjuice/comments/6nneml/jeff_bezos_amazon_ceo/

PS – Another friend speculated that Elon Musk might also be on TRT, which I’m not seeing as much – though it looks like he’s had a hair transplant: 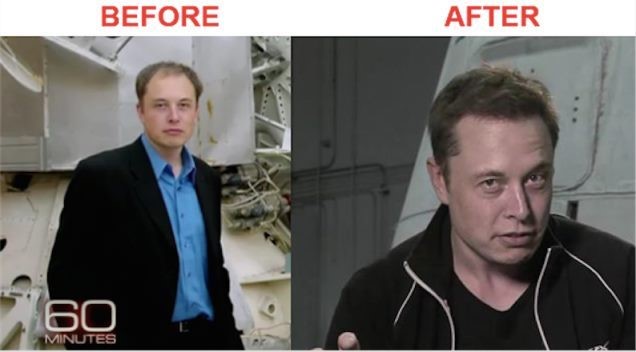 4. Krugman with some interesting thoughts (and appropriate humility): Will China’s Economy Hit a Great Wall? Excerpt:

The other day I issued a warning about the Chinese economy. It is, I wrote, “emerging as a danger spot in a world economy that really, really doesn’t need this right now.”

Unfortunately, the other day was more than 6 years ago. And it’s not just me. Many people have been predicting a China crisis for a long time, and it has kept on not happening.

But now China seems to be stumbling again. Is this the moment when all the prophecies of big trouble in big China finally come true? Honestly, I have no idea.

5. For the last two decades, I’ve always felt like pharma companies jacking up prices in the U.S. (and ONLY the U.S.) by double digits every year was totally unsustainable – but I’ve been dead wrong so far. Here’s a good article about the deadly consequences of our government’s total, disgraceful failure in this area: The price of insulin in the U.S. has skyrocketed. It’s leading to tragic consequences. Excerpt:

Today, critics argue that the price of insulin has far outpaced any innovations. In the past decade alone, U.S. insulin list prices have tripled, according to an analysis of data from IBM Watson Health. In 1996, when Eli Lilly debuted its Humalog brand of insulin, the list price of a 10-milliliter vial was $21. The price of the same vial is now $275. Those costs can be compounded by the multiple vials that diabetics may require to survive each month. “It’s a very big problem,” says Robert Gabbay, chief medical officer at the Joslin Diabetes Center in Boston. “It’s a tragic barrier to care.”

6. A good article on one of the most costly and difficult-to-solve market inefficiencies I’ve ever seen: women are clearly more successful investors than men, yet they are almost absent from the profession. Consider Firing Your Male Broker. Excerpt:

While neither sex is immune to shoddy behavior, research has shown that female investors are more likely than men to focus on a family’s financial goals over their own absolute investment performance. A study by the Warwick Business School concluded that women outperformed men at investing by 1.8 percent. For one, women avoid “lottery style” trading and are more likely to focus on shares with good track records or on overlooked yet productive funds.

Clare Francis, a director at Barclays Smart Investor, agreed with the researchers, who attributed the difference in performance to women’s judiciousness. “The stock market is often portrayed as a high-energy, risky environment,” she said. “But this analysis shows that taking a more long-term view about what to invest in, rather than picking eye-catching and potentially more volatile shares, is actually likely to provide a better return on your money.”

In one of my favorite papers, “Boys Will Be Boys,” published in the Quarterly Journal of Economics, Terrance Odean at U.C. Berkeley and Brad Barber at U.C. Davis found that accounts owned by women outperformed those of men because women traded a whopping 69 percent less than men and incurred less in trading costs. Why did the men trade more? The research indicates men regularly exhibit overconfidence in their ability.

PS – I published two articles on the NY Times website about this in 2014:

A Deeper Conversation on Women in Hedge Funds