How We'll Profit From the Last Digital Leap

Editor’s note: Today, we’re taking a break from our usual fare to share an essay from our friend and colleague Jeff Brown over at Brownstone Research.

Regular Empire Financial Daily readers are familiar with Jeff. He’s an active and successful angel investor in early stage technology companies. From semiconductors to mobility… to broadcasting and video technology… to technology infrastructure… to IT networking and security… to automotive and even consumer electronics… Jeff has done it all.

And now, he’s found a way for investors to profit from what he’s calling the “last digital leap”…

Imagine a typical Friday night back in the 1990s…

For many of us, our evening entertainment would include one iconic company: Blockbuster Video.

Today, the name Blockbuster might evoke a feeling of nostalgia. It’s not just the brand, but the memories of hopping in the car, driving to a Blockbuster, and wondering what we’d come home with to watch.

Blockbuster completely missed a major shift in the movie rental business… the launch of a tiny competitor called Netflix (NFLX) in 1997.

Netflix’s business model was simple. Rather than traveling to a video rental store, the company would mail consumers the DVDs they wanted to watch.

And in 2007, Netflix changed the game. It began allowing customers to “stream” movies directly from their homes… no VHS or DVD required.

Ironically, Blockbuster had the opportunity to purchase Netflix for $50 million in 2000. The company passed on the deal – arguably one of the worst business decisions in history.

We all know how the story ended.

Given the choice between convenient video streaming or waiting in line at a Blockbuster store, customers signed up for Netflix in droves. In 2013, Netflix had approximately 34 million subscribers worldwide. Today, that figure is 203 million.

Blockbuster, meanwhile, filed for bankruptcy in 2010… a desperate attempt to escape its $1 billion debt load. Today, the massive franchise has wilted down to a single store located in a small town in Oregon.

And for investors in Netflix, the returns were phenomenal… 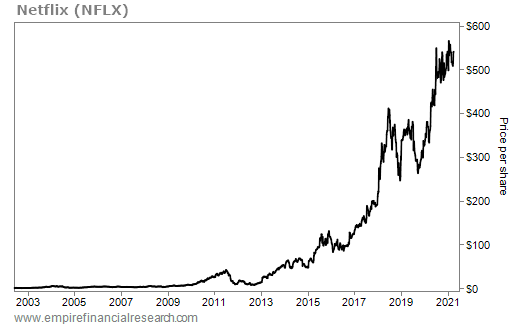 The story of Netflix and Blockbuster is a great example of what I call a “digital leap.” And it’s these events that hold some of the most promising investment upside.

But when they occur, the profit potential is enormous.

The digital leap from video rental to at-home streaming is a perfect example. But it’s not the only one.

Just look at some other examples…

Back in the late ’90s and early 2000s, a small company called Amazon (AMZN) began a digital leap in the retail space by shipping books to customers.

By 2003, the retailer was becoming the go-to place for virtually anything a customer might want to buy. And in doing so, Amazon helped define the e-commerce industry.

These days, instead of going to a brick-and-mortar store, many of us simply go online to purchase the items we want. Half of all online shoppers go to Amazon first to search for a product.

Amazon’s stock price has shown the results here as well… Someone who invested $10,000 at its IPO would have more than $12 million today. 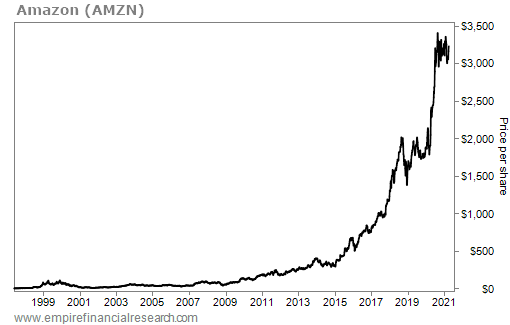 You may have seen one of Square’s (SQ) beautifully designed point-of-sale (“POS”) terminals at one of your favorite local small businesses. I see them everywhere – restaurants, coffee shops, my local wine and spirits store, my butcher, etc. 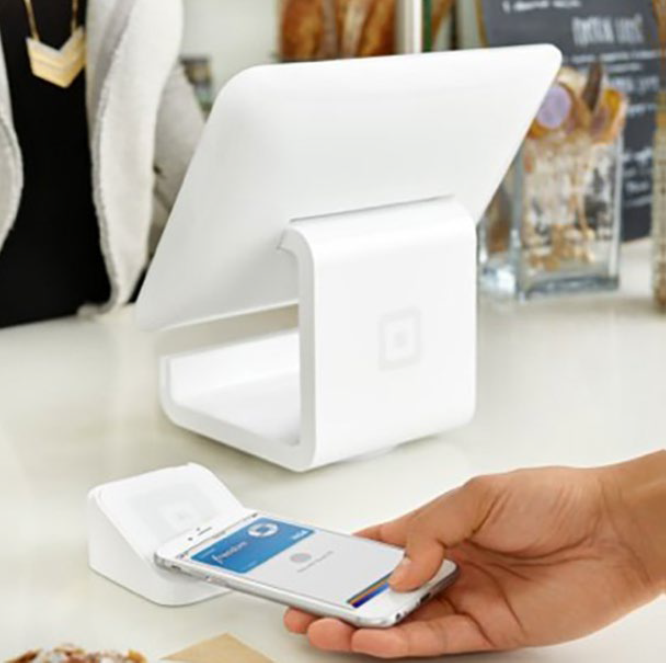 Square has made it easier than ever for small businesses to handle transactions. Instead of requiring customers to pay with cash or check, Square enabled small retailers to accept credit cards at the “register.”

But that’s not its only improvement… Square’s Cash App is one of the best payment applications available today. The design is clean. It’s simple to use. And it enables users to send money back and forth without ever pulling out their wallets.

In other words, Square is helping society move away from using physical bills and coins… and toward a system where all our payments are digital. 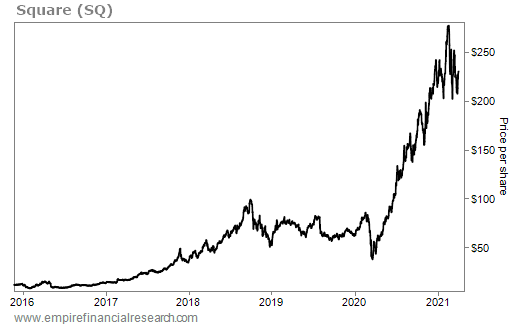 Or think about Tesla (TSLA)…

Normally, when we get into our cars, we have to think about where we’re going and how we’re going to get there. But Tesla has been changing the game with its Autopilot system.

With Autopilot, drivers can take their hands off the wheel and let the car drive itself down the highway. And Tesla is on the cusp of full automation. When that happens, customers will be able to get from their driveway to their destination without any input other than entering the address.

In other words, Tesla is leading the automotive industry into a digital leap.

And in 2018, when everyone was saying to avoid Tesla like the plague… I was pounding the table. I could see the digital leap coming, and I knew we needed to get in ahead of the jump.

And now, in 2021, we’re in the early stages of the last digital leap for a major industry, and I believe it will be the biggest of them all.

As we’ve seen, when a digital leap happens, life-changing profits are possible.

But there’s one big industry that has lagged behind the others… and has yet to truly go digital.

I believe this last digital leap will be even bigger than all the ones we’ve seen before. The pandemic has thrown this space into overdrive… and the industry is finally being forced to catch up to modern technology.

But the good news is… we’re still in the early stages.

I’m convinced fortunes will be made. That’s because this industry has trillions of dollars on the line.

And this is why I’ve been preparing a very special presentation for investors… and why I’d like to invite you to join me tomorrow at 8 p.m. Eastern time for my “Last Digital Leap” event.

There, I’ll share all the details on the industry about to make the leap… and how attendees can get in position to profit. Because there’s one company on my list that is right in the middle of this digital leap.

Even better, it’s on the cusp of a huge announcement. Once that happens, there’s no telling how high its shares could go.

To make sure you get a space at the “Last Digital Leap,” click here to reserve your spot – it’s free to attend.

It’s a night you won’t want to miss.

In the mailbag, more reactions to the Archegos-induced sell-off in certain areas of the market and readers write in about their home viewing preferences, with an emphasis on binge-watching…

Did anyone buy Netflix, Amazon, Square, or Tesla in the early days and manage to hold on? Let us know about your biggest moonshots by sending an e-mail to [email protected].

“One hundred percent, the regulators need to look long and hard at equity swaps (as well as naked shorting… which is basically the same thing). Hopefully, there will be tightened restrictions on the amount of leverage and disclosure required. Not to mention the lack of follow through on ‘failure to deliver’! Trading what essentially can be classified as phantom shares creates risk for individual investors and small cap companies in particular that have nothing to do with the fundamentals. Just my two cents. Love your emails, keep them coming!” – Scott S.

“Yes and yes to your questions. But if regulators do try to end this, these greedy money guys will just find another way around it.

“This is disgusting. Individual investors will pay the price for the market tanking as crooked hedge funds deceive their way through the market.

“And you wonder why so many people are not in the stock market.” – Kay B.

“Prefer to see big movie releases at the theater, but won’t, due mostly to Covid. Also, prefer to be able to binge watch as much of a series as I want, at any one time.” – Joe T.

“I like to watch the series at one time for continuity.” – B.T.

“As retired folks, we much prefer binge-watching, be it from services that provide their newer shows to allow it, or, more often, be it by finding older shows with multiple years of previous shows that we can access through our cable service or subscription services. We often finish the day’s work by evening mealtime and watch episodes of the current show we between then and bedtime.

“We DVR the network shows presented on a weekly basis and watch them when we want a break from our current binge-watch, or when we’ve finished one series and haven’t yet found another. The bottom line is that, whether the shows are provided weekly or a season at a time, we watch them all at our convenience, rather than when the network or cable service airs them. I rather suspect that a large percentage of the population does the same.” – Otto K.

Berna comment: I agree, Otto. It’s an on-demand world now. Even if video streamers attempt to dole out episodes one or two at a time, plenty of people will just wait and consume them all at once anyway. This battle has probably been lost!