How to raise cash; Elizabeth Holmes convicted; Where the Despairing Log On, and Learn Ways to Die; Excerpt from The Art of Playing Defense on Suicide and Guns

1) One of my readers, John B., sent in an interesting question:

When one wants to raise cash in a portfolio what is the way you recommend? Do you sell entire positions of a stock whose future prospects aren't quite what you thought, a portion of several or all positions, or some of both?

This is a great question, so I'd like to address it here.

I don't generally set out to raise cash – it's not a top-down decision. Rather, something triggers me to sell something I own – either the stock price rises to the point at which I want to trim or exit (a happy scenario) or something bad happens and I decide that my investment thesis is no longer valid, so I sell (an unhappy scenario).

Also, sometimes my portfolio gets too bloated so I get rid of the smaller, lower-conviction ideas.

I do recall one time going into the global financial crisis when I had a very bad feeling about the markets and wanted to get more defensive. In this case, I exited every position related to the housing market and that was economically sensitive, trimmed all of the remaining positions by roughly 20%, and added materially to my short book. As a result, my fund was down only half as much as the market in 2008. But keep in mind that I do this very rarely.

2) I wasn't the slightest bit surprised to see that Elizabeth Holmes was convicted, as my colleagues Berna Barshay, Herb Greenberg, and I have written about her fraud at Theranos more than a dozen times (archive here). Hopefully this will deter other con men (and almost all are men) – though I'm not holding my breath...

I thought this was an interesting take: 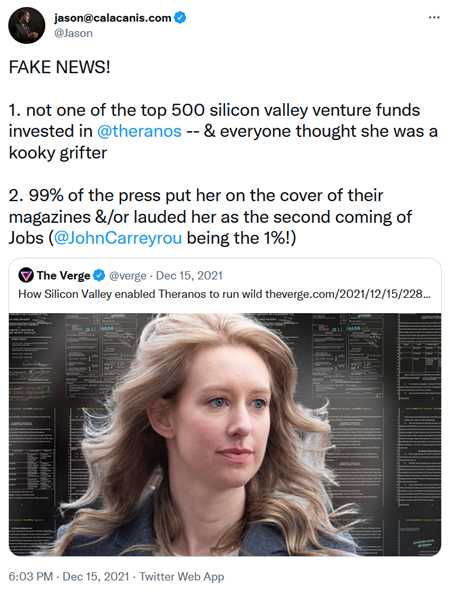 3) Though this topic isn't directly related to investing, I'd argue that it's all about managing risk to avoid calamities, which is the most important thing investors need to do...

This New York Times article last month is one of the most disturbing I've read in quite some time: Where the Despairing Log On, and Learn Ways to Die. Excerpt:

Soon after joining, each of them was dead.

Most suicide websites are about prevention. This one – started in March 2018 by two shadowy figures calling themselves Marquis and Serge – provides explicit directions on how to die.

The four young members were among tens of thousands around the world who have been pulled in. On the site's public forums, in live chats and through private messaging, they discuss hanging, poison, guns, and gas. Strangers seek out partners to meet face to face and kill themselves together.

Participants routinely nudge one another along as they share suicide plans, posting reassuring messages, thumbs-up and heart emojis, and praise for those who follow through: "brave," "a legend," "a hero."

Though members are anonymous, the New York Times identified 45 who had killed themselves in the United States, the United Kingdom, Italy, Canada, and Australia – and found that the trail of deaths is likely much longer.

More than 500 members – a rate of more than two a week – wrote "goodbye threads" announcing how and when they planned to end their lives, and then never posted again. In many of them, people narrated their attempts in real-time posts. Some described watching as other members live-streamed their deaths off the site...

The site now draws 6 million page views a month, on average – quadruple that of the National Suicide Prevention Lifeline, according to data from Similarweb, a web analytics company.

Most members reported that they had experienced mental illness and were 30 or younger, according to a survey last year by the site. That age group roughly aligns with the demographic in the United States – 15 to 24 – that had the sharpest rise in suicide rate from 2009 to 2019, the most recent data available.

After reading this, I had a few thoughts/questions: 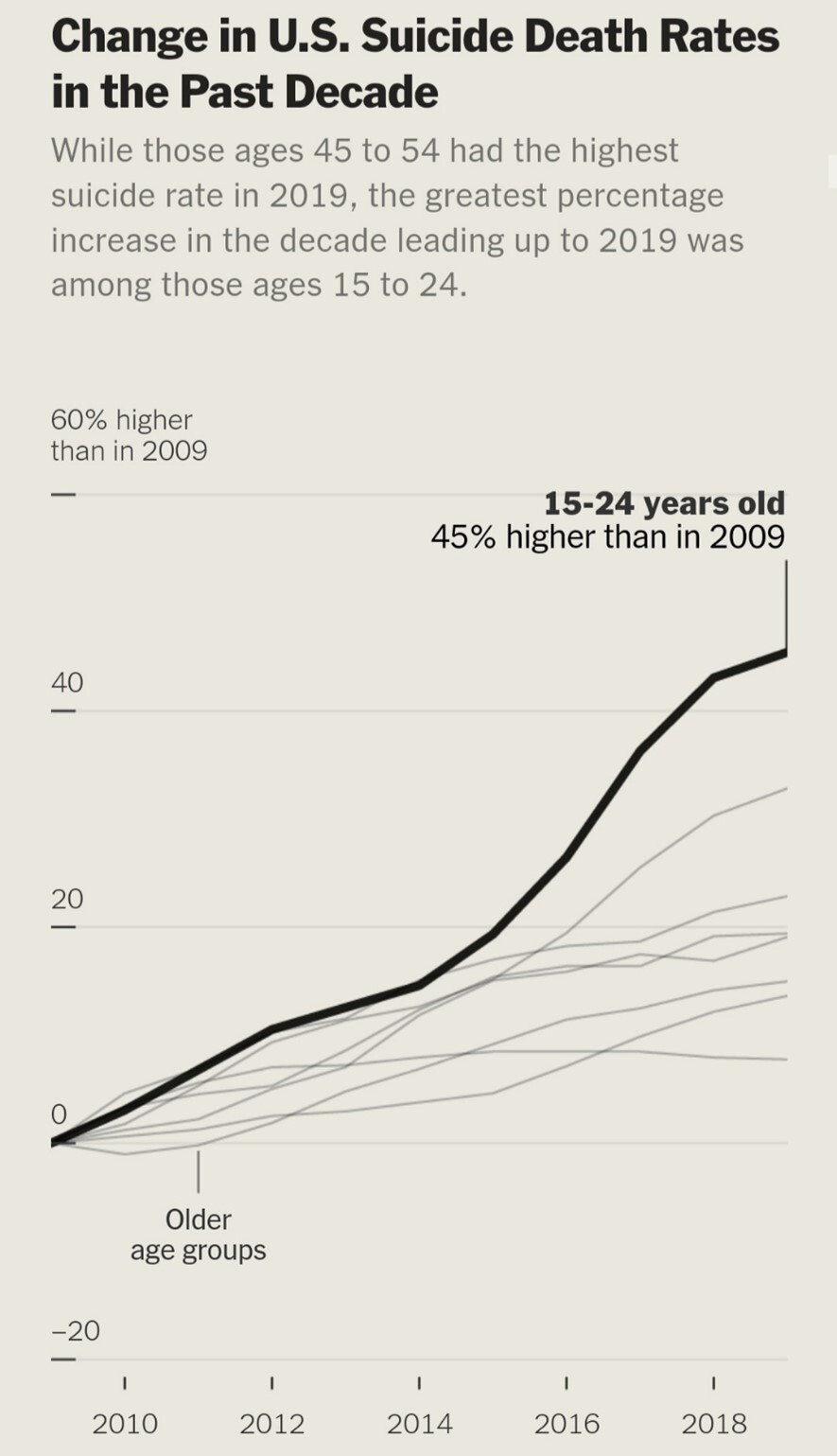 I wrote about this topic in my book, The Art of Playing Defense. Here's an excerpt... 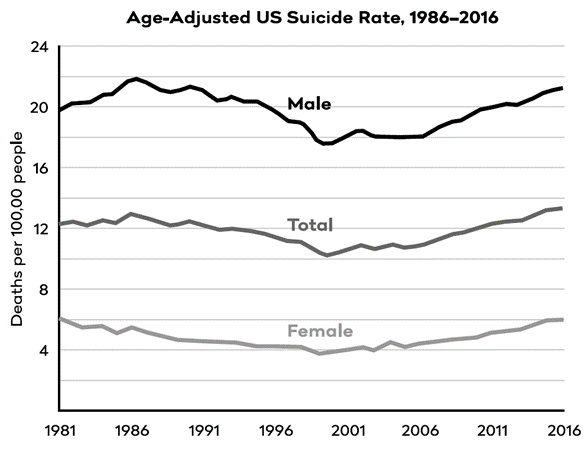 If you are a parent of a teenager or young adult, you need to think especially hard about this risk, as suicide is the third and second most common cause of death for Americans between the ages of 1-14 and 15-34, respectively.

Experts aren't sure why, but I think NYU Marketing Professor Scott Galloway nails it when he writes:

There are many factors, but ground zero is the nuclear weapons [smartphones with Facebook and other social media] we've put in girls' hands to objectify them, perpetually undercut their self-esteem, and enable them to bully each other relationally, 24/7.

If you have even the slightest hint that someone might be suicidal, take action! For starters, call the National Suicide Prevention Lifeline at 800-273-8255. Then, find a good psychiatrist or counselor and try to get the person to see him or her. There are many therapies and medications that can make a huge difference.

I could have put this section under accidents, but instead, put it here because guns are used in almost half of all suicides in the U.S.

Before diving in, I want to be clear that I don't question the right of law-abiding citizens to have a gun – I just, in most cases, question their wisdom.

The combination of the coronavirus and the George Floyd/Black Lives Matter/Defund the Police movements have led to a surge in people buying guns. Background checks, which tend to closely track actual sales, were up 60% year over year in 2020.

Most people have a gun for safety – to protect themselves – yet ironically, it's the single thing in their home most likely to harm them or a loved one.

Gun accidents are alarmingly common. Think of the young man who comes home late and is shot by his father, who thought he was an intruder. Or the guy who shoots his friend or wife in a burst of rage (the presence of a gun in a domestic violence situation increases the risk of homicide six-fold). Or the child who plays with a gun and it goes off (tragically, children aged five to eleven are 11 times more likely to be fatally shot in the United States than in any other developed country).

I've seen how easily it can happen. In high school, I almost shot my best friend with a shotgun while hunting. I was walking in the lead, and he was 30 feet behind me. Suddenly, a pheasant burst out of the brush behind us, and we both turned at the same time and shot. He brought down the bird. I, on the other hand, saw my buckshot whiz only inches above the top of his head (I didn't tell him for 20 years)!

But the biggest risk of having a gun in your house isn't an accident – it's suicide. There's a lot of (well-deserved) press around guns being used to murder people, but 60% of gun deaths in 2017 were from suicide, not homicide.

Overall, gun owners are nearly four times as likely to die by suicide than people without guns, even when controlling for gender, age, race, and neighborhood.

The risk is particularly high for first-time gun buyers. A recent study tracked nearly 700,000 first-time handgun buyers in California, year by year, and compared them with similar nonowners, measuring risk by gender. Men who bought a gun for the first time were eight times as likely to kill themselves by gunshot in the subsequent 12 years than nonowners; women were 35 times as likely to do so.

Those who doubt that it matters – "if the first attempt fails, they'll just do it later" – couldn't be more wrong. In fact, of the 91% of people who survive their first suicide attempt, 70% never try again, and only 7% later succeed.

This is because, contrary to popular perception, most suicide attempts are impulsive, prompted by a fleeting crisis, depression, drunkenness (33%), or drugs (24%). Thus, it's critical that there isn't a gun nearby when the impulse strikes.

To understand how important it is to keep guns out of homes, consider this: the suicide attempt rate in South Carolina is 28% higher than in Maryland, yet the suicide death rate is 67% higher. Why? More homes with guns.

In summary, if you own a gun, I strongly urge you to think long and hard about the risk you're taking. Do you really need it? Unless you live in a high-crime neighborhood, you'll probably never use it to protect yourself.

If you feel that you must own a gun, at least get a big one – handguns are used in 69% of firearm suicides (65% for males, 88% for females). And make it difficult to access. Keep the unloaded gun separate from the ammunition, which should be under lock and key (and don't tell anyone in the family where the key is). If you use it for hunting, can you keep it somewhere out of your home?