How I've nailed the top of so many bubbles: my 'spidey sense'; Tesla's big move; My friend's 11-year-old son

1) The primary way I've been able to nail the top of so many bubbles – Internet, housing, alternative power, 3D printing, bitcoin, and pot stocks, to name a few – is good, solid, fundamental analysis.

But a secondary way is that I pay attention to warning flags that trigger my "spidey sense" (defined as: "an extraordinary ability to sense imminent danger, a kind of 'sixth sense' attributed to the comic-book superhero Spider-Man").

It's hard to define exactly what makes my spidey sense tingle, but let me give you two recent examples...

The stock began trading after a 5-for-1 split that it announced three weeks ago.

As my friend Doug Kass of Seabreeze Partners explained in a note yesterday:

I learned this when I was growing up in Rockville Centre, New York.

My dad would often come home from his medical practice with a pizza, and a dozen stuffed clams, for dinner when he was working late.

The pizza was incredible, purchased from La Bella Note Restaurant in Baldwin, Long Island, which is now closed.

I would call up my dad pleading for him to bring home the 18-inch pizza with eight slices (not the 18-inch one with six slices) as, to this nine-year-old kid, the eight slices sounded larger than the six-slice pizza.

One day my dad came home with the 18-inch pizza with only six slices.

Disappointed, I started crying, thinking there was not enough for me!

This silliness, and embracing of post-split shares of Tesla and Apple, is nothing short of stupid – as I was many decades ago.

One of my friends added:

As of today, stock splits matter again (AAPL, TSLA) after a long hiatus. This is beginning to resemble a period I vaguely recall from 20 years ago...

3) Here's another example of something that's making my spidey sense tingle...

My friend Alan called me over the weekend, with his 11-year-old son Leo on the line. Leo is an enterprising young man, detailing cars for $80 each – sometimes making $200 in a day – and investing the proceeds in his favorite companies like Tesla, Apple, Amazon (AMZN), and Netflix (NFLX).

You can imagine how well his stock portfolio is doing, and what he thinks of his stock-picking abilities... so you won't be surprised to hear that he approached his dad, asking to borrow $50,000 so he can day trade options on his favorite stocks!

Alan wasn't having much luck talking Leo out of this foolishness, so he let me have a try. I said:

Leo, I think it's wonderful that you're taking an interest in investing. I wish I'd started learning at such a young age!

But you have to understand that stocks, even of the greatest companies, can go down.

They were great companies, but their stocks were wildly overvalued and investors who bought them at their peaks suffered huge losses.

I was a classic "bull market genius" back then – just like you are today.

Thankfully, however, I got value investing religion in the nick of time and sold my bubble stocks. For example, I traded my AOL shares for two shares of Berkshire Hathaway (BRK-A).

Tell me, Leo: what will you do if you buy a stock (or, worse yet, options on a stock) and it goes down?

But Whitney, I'm only going to hold it for a day or two – and none of these stocks are scheduled to report earnings, so there won't be any bad news that will make them go down!

I sighed and tried again...

Leo, I encourage you to learn about a small number of companies you're interested in. Research them. Use their products. Ask other customers what they think. Read their earnings reports and study their financial statements.

Then, if you think you've found a company the market isn't fully appreciating, buy its stock.

Look to own no more than five stocks – and make one or two trades per year.

So, did any of this sink in? Of course not! Here's the text exchange I had with Alan afterward: 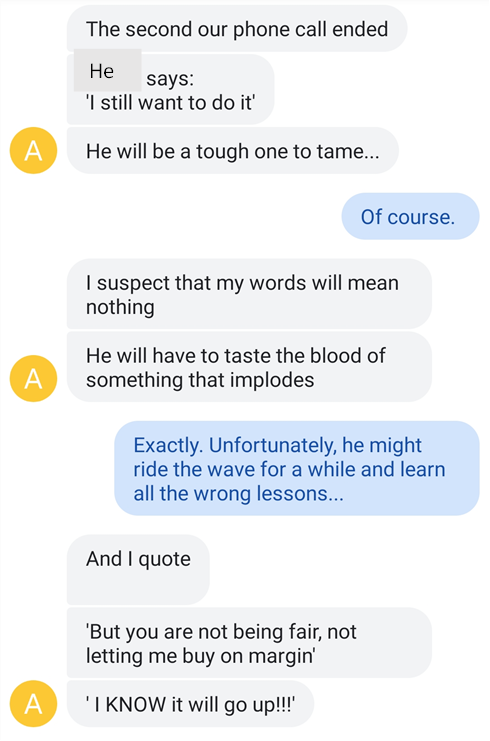 Yup, my spidey sense is tingling...

That said, today's market reminds me more of the beginning of 1999, not March 10, 2000, the day the Nasdaq peaked (the tech-heavy index more than doubled over that period).