How I manage my personal account; Why I sold my SandRidge Energy stock; Avoid Digital World Acquisition Corp. (DWAC)

1) In my last five e-mails, I discussed every stage of my investment in SandRidge Energy (SD), except the last one: Why I decided to sell it last week (for a 544% gain in less than 18 months).

To explain this, I first need to share some background on how I manage my personal account...

In short, I barely manage it at all. Before selling SandRidge, I hadn't made a single trade in almost two months. I don't watch the portfolio every day. I don't usually read the quarterly earnings releases of the dozen companies I've invested in, much less listen to their conference calls.

I just go about my life and don't do anything in my personal account the vast majority of the time. I'm the embodiment of what Charlie Munger calls "sit on your ass investing."

My approach might strike some folks as reckless. If I'm not going to follow the companies and stocks that I own on at least a quarterly basis, then shouldn't I just buy an index fund like the S&P 500 Index with the equity portion of my portfolio?

For most busy people, the answer to that question is yes.

But I'm not most people. I've spent more than two decades picking hundreds of stocks in dozens of industries, which has given me the knowledge, experience, and "blink" reactions to find great investments occasionally. In other words, I just sit there until something really, really, really obvious comes along, and what I call my "spidey sense" is tingling like crazy.

Even then, most of the time, I don't do anything in my personal account because my first priority is my business and, in particular, finding great investment ideas to share with Empire Financial Research readers via our two free dailies and eight paid newsletters.

There's never any question about whether I should keep an idea for my personal account versus giving it to our subscribers. I'm long-term greedy. I'm certain that I'll do better over time if I give my best ideas to my subscribers, earning their confidence and trust and helping them get rich.

But on very rare occasions, something obvious comes along (like SandRidge) that's too small or too weird for any of our newsletters, in which case I'll buy it in my personal account.

(I have to admit that it's really irritating to realize that my portfolio is performing much better now that I'm practicing benign neglect versus when I ran a hedge fund, constantly watching the stocks I owned, which led me to sell too early in many painful instances, as I discussed in Wednesday’s e-mail.)

2) My sell decisions in my personal account are the same as my buy decisions: I sit on my ass and wait until it's really, really, really obvious that I should trim or exit a position.

So what triggered my decision to exit SandRidge? Simple. Reason No. 4 that I discussed in yesterday's e-mail kicked in: "Your thesis has played out, and the stock fully reflects this (i.e., you've been paid for it)."

I knew going in that SandRidge wasn't a high-quality company whose stock I could just buy-and-hold for a long time. In fact, it was pretty much the opposite – it's a highly cyclical business whose profitability is largely determined by two factors totally outside of its control: the prices of natural gas and oil. As Harris Kupperman correctly acknowledged in his Value Investors Club write-up, which led me to buy the stock, it's a "turd."

In buying SandRidge, as I noted in Monday's e-mail, I was simply making "a bet that the price of natural gas and, to a lesser extent, oil would recover."

It was a good bet. As you can see in this long-term chart, the price of natural gas has skyrocketed and now sits at a high not seen in more than a decade: 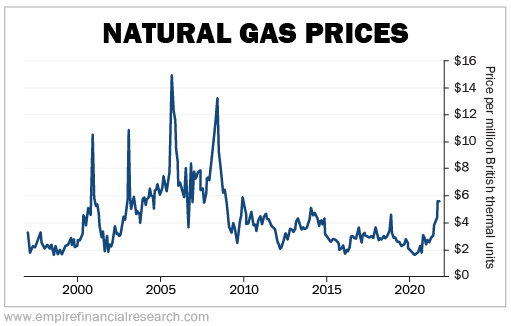 Similarly, the price of oil has also soared to more than a six-year high: 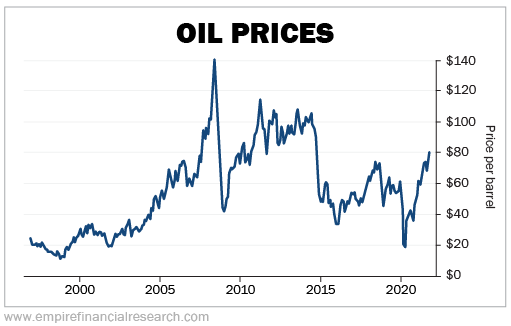 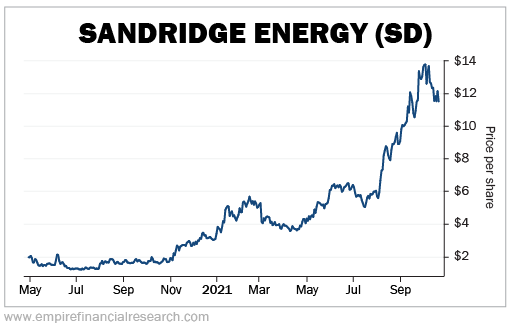 So why did I choose to sell over the past week, as opposed to a month ago or a month from now?

I can't really explain it, other than to say my "spidey sense" was tingling, triggered no doubt by several factors:

So I sold half of my SandRidge shares last week for around $13, just to see how I felt about it. To make sure that I'm not making a rash, emotional decision, I sometimes buy or sell a half-position, cogitate on it for a day or two, and then see how I feel about it.

In this case, I felt great about the sale, so I blew out the remainder around $12.

I recognize that I might have sold too early. There are undoubtedly plenty of people who closely follow natural gas and oil prices and are convinced that they're going higher and would tell me I should have held onto my SandRidge stock to capture another leg up.

But I know my limitations – and predicting commodity prices is certainly one of them. So even if SandRidge shares go a lot higher, I'll have no regrets.

To quote my colleague Enrique Abeyta, "I planned the trade and traded the plan..."

3) Speaking of trades, I'm begging you not to even consider trading – either on the long side or the short side – the latest foolish meme stock, Digital World Acquisition (DWAC). This special purpose acquisition company ("SPAC") soared 357% yesterday. It spiked another 285% earlier today – in total, rising from $10 to $175 – on news that it was partnering with former President Donald Trump to launch a social media company called "TRUTH Social."

To be clear, my view that this is one of the stupidest things I've ever seen and that this stock is going to implode, likely within days, has nothing to do with my political views. As I wrote in my October 4 e-mail, "Many people let their partisan views affect all sorts of nonpolitical decisions – including financial ones," which is a recipe for disaster.

It’s simply based on the fundamentals (of which there are essentially none; TRUTH Social is nothing more than an idea at this point) and the long, dismal financial track record of those who’ve done business with the former president.

If you want to support him, there are far better ways to do so than buying DWAC.