How Costco gained a cult following â by breaking every rule of retail; How Sears Lost the American Shopper; John Oliver on Amazon's warehouses; A violent hailstorm in Italy and a wonderful time in Paris

1) Nobody is a bigger fan of Costco Wholesale (COST) than I am… other than perhaps Charlie Munger, who’s on the warehouse club’s board of directors. Costco is an incredibly admirable company in every way, which is well-captured by this article: How Costco gained a cult following – by breaking every rule of retail. Excerpt:

It is a place where you can buy, in the course of one trip, a 27-pound bucket of mac and cheese, a patio table, a wedding dress, a casket, a handle of gin, a tank of gas, a passport photo, a sheepskin rug, a chicken coop, prescription medications, life insurance, a $1.50 hotdog, and a $250,000 diamond ring.

Items sit on wooden pallets in dark, unmarked aisles. Brand selection is limited. And you pay a $60 annual membership fee just to get in the door.

The end goal: To cut the “fat” out of traditional retail and pass on the savings to loyal customers and employees.

This philosophy often anguishes Costco’s shareholders — but it has also earned the company a cult following around the world. At a time when brick-and-mortar retail is crumbling at the feet of e-commerce, Costco has experienced steady growth.

How did this nondescript chain of warehouses find success?

2) At the polar opposite extreme of the retail industry is Sears, the once-iconic American department store chain that was destroyed by a hubris-filled hedge fund manager, Eddie Lampert. In this story, How Sears Lost the American Shopper, the Wall Street Journal interviewed eight people, including two former CEOs and one current co-CEO, about the company’s long demise. (Unfortunately, Lampert wouldn’t talk – I wouldn’t either if I were responsible for this level of reckless destruction.) Excerpt:

Alan Lacy [CEO, 2000-2005]: It became clear early on that Eddie’s focus was maximizing cash flow in order to buy back stock. And in that process, the culture changed. Some of the investments that could have been made to have given the off-mall conversions a better chance of working weren’t made.

Michael Ryan [Former hardware salesman, vice president]: We went from spending several million on the remodels to doing it for a quarter of that price. We were taking Kmart stores that were in deplorable condition and trying to put Sears products in them and it was a disaster. The Kmart customers left, and the Sears customers didn’t come because the buildings were not in the best places and not in the best shape.

Lynn Walsh [Former vice president]: Right from 2005, there was not a willingness to invest anything in the stores. New fixtures? Why can’t you use the ones you have? You want to redo that part of the floor? Why do we need to do that? It just got to the point where executives stopped asking, because you knew what the answer was going to be. I remember visiting a Sears store in the Chicago area. The parking lot was like a war zone with the potholes. That was when it hit me. What customer would go through this when they can go to so many other stores and get very similar merchandise for a comparable price?…

Michael Ryan: It was awful. [Lampert’s organizational restructuring of Sears in 2008 into individual business units, such as online, real estate, etc.] made it competitive from one business unit to the other. Every business had to show a profit, so if you were a small business trying to grow and you weren’t making as much profit you wouldn’t get advertising, wouldn’t get support.

Lynn Walsh: I don’t know if you’re familiar with ‘Game of Thrones?’ That’s exactly what it was like. It set up this incredible infighting.

Lynn Walsh: The weekly Thursday morning teleconferences with Eddie were embarrassing. We would all avoid eye contact with each other in those meetings, because it was humiliating. He would say, ‘How could you possibly think that was a good decision?’

Why pay your direct reports millions of dollars if you’re just going to ignore their recommendations?…

Alan Lacy: In 2014, with the Lands’ End spinoff, and then the Seritage spinoff and the Craftsman sale, that’s when it seemed to shift into, he’s managing for cash flow, or liquidation. Everybody knew how the movie was going to end. It was just a question of how many minutes are left.

Arthur Martinez [CEO, 1995-2000]: The sale of Craftsman to Stanley Black & Decker was the ultimate capitulation. How could he take the birthright brand of Craftsman, which was truly iconic, and put it into Ace Hardware, and now it’s in Lowe’s. It just kills me. Once you lose control of these brands, you are no longer the destination for them.

Fred Imber [Former mattress salesman]: The lack of staff really disrupted the entire operation for at least the last two to three years. They were seriously cutting the payroll. That was a distraction for the commissioned salespeople because we had no cashiers on our particular level. We were on the top floor of a two-floor Sears, and the few cashiers that were left were all working downstairs. At the end, they weren’t even maintaining the registers. A lot of the registers were broken. I didn’t even see a cleaning crew at all.

3) Speaking of retail, comedian John Oliver of HBO’s Last Week Tonight took an in-depth look at the lives of workers at warehouses run by Amazon (AMZN) and others. The answer: It can be very tough for them, with every movement monitored down to the second, 15 to 20 miles of walking per shift, little time to even go to the bathroom, etc.

You can watch Oliver’s video here: 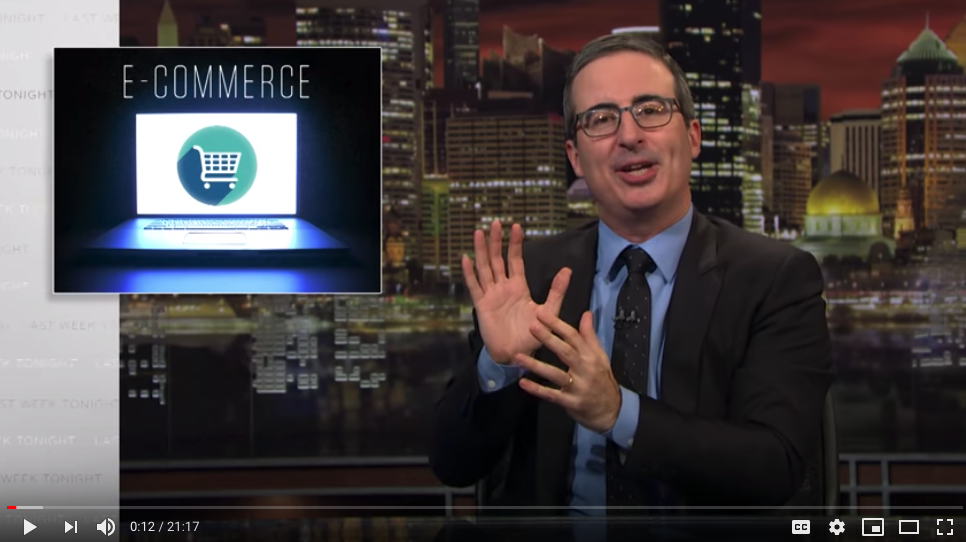 4) Greetings from southern Italy, where I just arrived from Paris to co-host the 16th Annual Value Investing Seminar in Trani. It’s always sunny and beautiful here, but not today… In fact, on the drive from the airport, we were hit by the most violent hailstorm I’ve ever experienced. It was INSANE, as you can see from this short video clip I took. Every other car pulled over, but my friend Rosa kept on driving – a rental car, she explained – LOL!

My daughter and I had a wonderful time in Paris, our first visit since she was 16 months old. Here we are in front of the Eiffel Tower – caught perfectly in midair by an Aussie college student we met. I posted more pics on Facebook here. 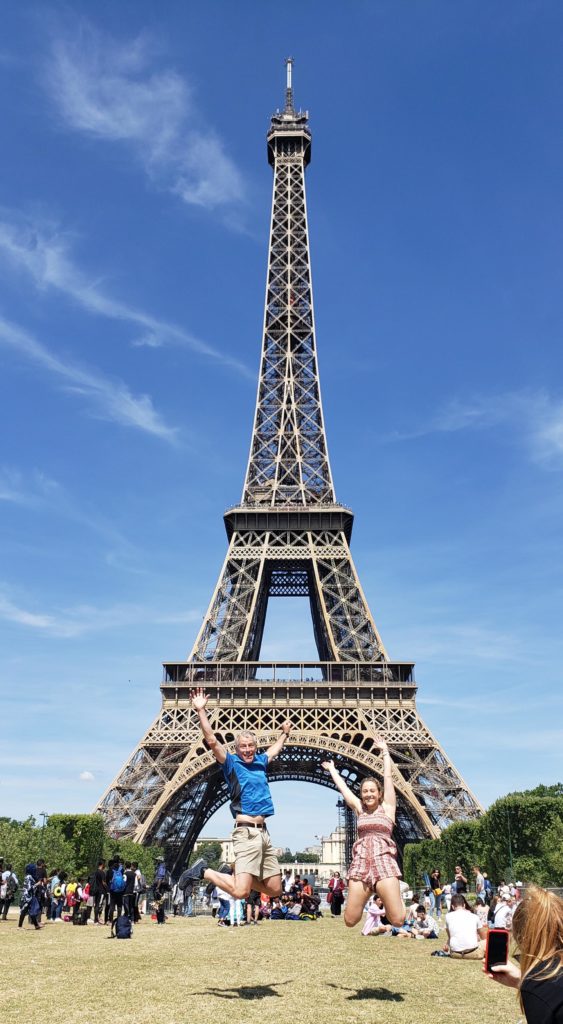