How Bill Hwang blew up his Archegos fund; ARK Invest's new space ETF; Newsletter from the Nasdaq peak; How to file for a recovery rebate credit; I met the legendary Chongo

1) My colleague Enrique Abeyta and his analyst Gabe Marshank continue to educate, entertain, and enrich with their new Hard Money's Million Dollar Podcast.

In their latest episode, $16,432, they do a great job of explaining how Bill Hwang blew up his Archegos Capital Management fund, which sent shockwaves through Wall Street.

2) Here's yet another sign of speculation and foolishness in the markets...

Cathie Wood's ARK Invest launched a space-focused exchange-traded fund ("ETF") earlier this week – the ARK Space Exploration & Innovation Fund (ARKX). The problem is that there are almost no pure-play public space companies, so Wood has filled it with stocks that have nothing to do with space, as this Barron's article notes: Why Cathie Wood's Space ETF Has Some Unexpected Holdings. Excerpt:

Investors found some surprises in the fund's portfolio: Some popular firms in space-exploration related fields were not included, while other seemingly unrelated names – including half a dozen internet tech giants – make up a significant weight.

That is because ARK's space fund isn't limited to companies directly involved in the space business, but also other innovations that have indirectly enabled the space boom. The ETF owns Google parent Alphabet (GOOGL), for example, because it's a leader in artificial intelligence. Nvidia (NVDA), another holding, manufactures computer chips that allow rockets to operate efficiently...

The fund also holds companies that are well-positioned to benefit from the development in aerospace-related tech. E-commerce giants like Amazon (AMZN) and Alibaba (BABA) are included because they can save delivery costs and generate revenue from drones if that market matures and scales. Netflix (NFLX), another holding, could potentially unlock millions of new users as satellite broadband connects more people to the internet.

I agree with my colleague Berna Barshay: "What a joke! I wonder how many days it will take Amazon and JD.com (JD) to deliver to the moon colony?"

3) Speaking of bubbles... A hat tip to Doug Kass for flagging this newsletter, Walter Deemer's Market Strategies and Insights, which was published on March 3, 2000 – exactly one week before the Nasdaq Composite Index peaked. There are so many similarities to today... Excerpt: 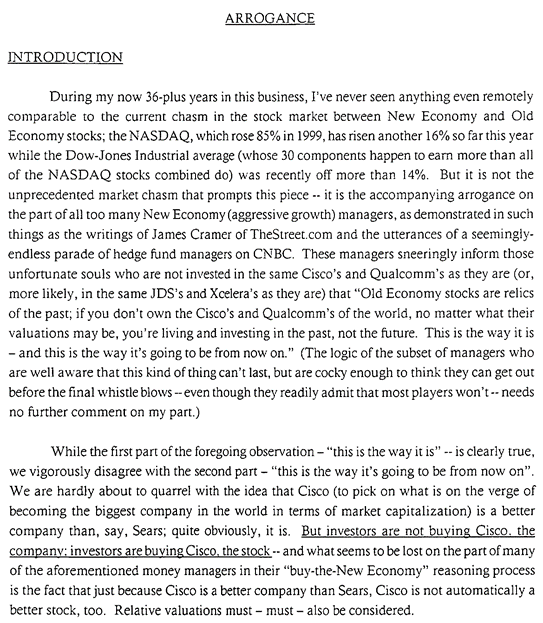 4) Here's a Forbes article on how to file for a recovery rebate credit: Did Your Income Drop In 2020? Here's How You Can Still Get Stimulus Checks. Excerpt:

For those whose incomes dropped significantly, the lack of a check is frustrating. So, what are their best next steps to obtain their stimulus checks?

Congress knew this would be an issue when they structured the CARES Act. The stimulus checks were really a rebate against the 2020 income tax return. As a result, they have built in safeguards to protect those whose 2020 income would allow them to qualify versus their 2018 and 2019 incomes.

"Taxpayers who believe they're entitled to a larger stimulus payment can file a Recovery Rebate Credit on their 2020 Form 1040 or Form 1040-SR to claim up to the maximum amount of the credit," explains [Colin] Horsford.

Taxpayers in this situation should consider filing their taxes as soon as possible. Keep in mind that the earliest that taxpayers can now file their 2020 tax is February 12, 2021 per the IRS announcement.

"If they can show that their income in 2020 was below the threshold for either or both payments, then they should get those payments when they file," says Greg Zbylut, partner at Breyer Andrew LLP in Pasadena, California.

Further, taxpayers who had a drop in income but are unsure if they are eligible to claim the Recovery Rebate Credit, should still proceed.

"Taxpayers have nothing to lose by properly applying for the credit since it won't increase their taxable income or reduce their refund," advises Horsford.

5) Last week in Joshua Tree, my guide Paul and I were walking through the Hidden Valley campground back to our site when an old man called out to us and asked if we wanted to buy one of his books.

Paul recognized him as the legendary Chongo – one of the original big wall climbers in Yosemite (here is a 2008 New York Times article about him: For Rock-Climbing Guru, the Sky Is His Roof) – so we chatted a bit. He's been homeless most of his life – at age 70, he's living out of a Prius (see pic below) – so to help him out I gave him $100 for a copy of his 500-plus page book, The Complete Book of Big Wall Climbing, which he said took him six years to write (he's holding it in this picture of us): 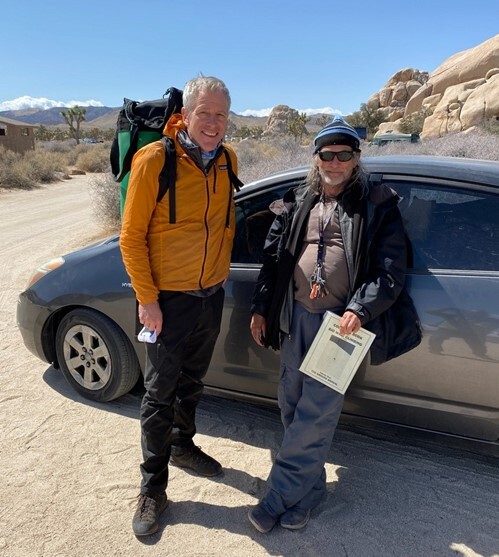 One of the most fun things about "van life" is the interesting people you meet – Paul and I met a bunch last week – none more so than Chongo!

P.S. Empire Financial Research and the market are closed tomorrow for Good Friday. Look for my next e-mail on Monday, April 5, after the Weekly Recap. Enjoy the holiday!