► This year, summer is going to look a little different…

Summer is here, but some of the staples of the season are not. The COVID-19 pandemic has canceled many of the mainstays – sporting events, outdoor music festivals, street fairs, camps, state and county fairs, and even large July 4 fireworks displays.

Cruise departures from U.S. ports restarting got pushed back until mid-September, and many Americans are still wary of getting on a plane. International travel is a non-starter, especially with the news yesterday that the European Union views Americans (as well as Brazilians and Russians) as high risk COVID-19 carriers and may ban entry.

But that doesn’t mean folks are giving up on summer altogether. Less money on vacations means more money to spend on consumption at home. While many Americans are out of work, those that haven’t taken a hit to income are looking to make the most of their “staycation” summer.

The quest to add luxury and fun to private homes is causing many products – some expected, and others surprising – to go out of stock.

Bulky seasonal items are typically produced during winter to fill the previous fall season’s orders. Manufacturing for most outdoor and sporting goods items happens in Asia, and products are loaded onto cargo ships by early spring to hit retailer shelves in April or May.

International supply chains, ocean shipping times stretching weeks to more than a month, and COVID-19’s disruption to Chinese manufacturing early in the year make it hard for businesses to chase supply and restock popular items.

Even if retailers saw trends blowing up in mid-March at the start of shelter-in-place orders, they were unlikely to be able to meaningfully increase their inventory. So if you want one of the items I discuss today and see it on the shelf, you’d be wise to grab it while you can.

When your backyard is your staycation kingdom…

With camp and other children’s activities canceled in much of the country, working parents are desperate to keep their little ones busy so they can take their Zoom calls relatively uninterrupted. Unsurprisingly, backyard games and toys have taken off…

In the June 8 Empire Financial Daily, I wrote about the growing shortage of bicycles. Also in short supply are backyard sprinklers, playground equipment, and most of all, trampolines.

According to market research firm NPD, sales of outdoor and sports toys were up 51% year over year in April. Some of the highest-growth categories were pools (up 161%), skateboards and scooters (up 107%), and playground equipment (up 81%) – which includes trampolines.

Patio furniture is also hot. Empire Financial Research senior analyst Steve Culbertson was looking to buy an outdoor dining set and visited multiple retailers – including Home Depot (HD) and Lowe’s (LOW) – that were sold out before finally finding one on Amazon (AMZN).

Online news site Vox reported that outdoor patio and furniture sales at Bed Bath and Beyond (BBBY) rose 88% in the last two weeks of April and first two weeks of May.

Steve reports that the out-of-stock retailers told him that they had seen a run on outdoor tables as local restaurants geared up to expand their outdoor dining, since indoor dining remains largely prohibited or at reduced capacity in the Northeast.

I’m in the market for an outdoor sofa, and it may turn out that I was too clever for my own good… A few years ago, I consulted with a major national retailer on markdown optimization strategies, and from that work, I know that prices on patio furniture leftovers are deeply slashed right after Independence Day. This year, there might be no leftovers!

Also in the backyard, people are apparently amusing themselves in the garden…

Another hot item is egg-laying chickens… but if you don’t have them by now, you’re out of luck.

But if there’s one must-have item of the summer, it would be the blow-up adult pool. These oversized kiddie pools – which often run into the hundreds of dollars – are so popular that some people have even started buying them on spec and re-selling them with huge mark-ups. Earlier this month, Canada’s national public broadcaster CBC spoke to one lucky inflatable pool owner…

Brent Charles says he’s seen the same model of pool they purchased from Canadian Tire being resold online for $500 more than what they paid.

“If we thought of [buying one] now, we’d be swimming on dry land.” 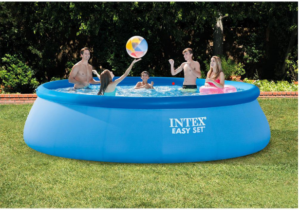 ► People are planning for a rainy day in different ways…

As I said in the June 9 Empire Financial Daily, sales for exercise bike company Peloton (PTON) have exploded. But people are also looking to complement their cardio with strength training, and hand weights have been difficult to find.

Folks continue to channel their productive energy into home-improvement projects and are challenging themselves with jigsaw puzzles. For the more tech-inclined, the incredible popularity of the social simulation video game Animal Crossing has propelled sales of Nintendo Switch game consoles. According to CNBC…

Switch sales spiked so quickly that many retailers have sold out of the consoles completely, forcing gamers looking to snag a Switch to look to online marketplaces like eBay and Amazon Marketplace, where prices for the console on some sites have surged as high as more than double the Switch’s standard price of $299.99. 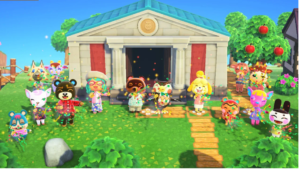 Freezers are another impossible-to-find item, as people are cooking more at home as well as looking to hedge themselves against ongoing meat shortages, which have thrown a wrench into their backyard barbequing plans.

And anyone who has noticed the sudden proliferation of home-baked bread clogging their Facebook feed won’t be surprised to hear that yeast is in short supply.

► But sometimes, you just need to get out of the house…

With the news that outdoor interactions pose much less risk for coronavirus transmission than indoor ones, outdoor leisure excursions are more popular than ever. Sports retailers have seen a surge in golf sales, and boating sales are remarkably strong for a tough economy.

The interest in outdoor leisure activities has brought a bit of a comeback to the “sharing economy”… but it’s not Airbnb rentals or Uber (UBER) rides that people are seeking.

With many public pools and playing fields shuttered, startups that facilitate short-term rentals of private residential recreation facilities have seen exploding growth. Startups can help you rent a few hours at your neighbor’s swimming pool (Swimply), basketball or tennis court (Joyspace), or private boat (Boatsetter). According to Vox, Boatsetter’s bookings were up 40% year over year in May, and demand has exploded for Swimply…

For now, Swimply’s biggest hurdle is that demand outpaces supply by a factor of four – though that may change as more people with backyard pools look for ways to make up for lost income during the pandemic.

Swimply is in 39 states, as well as Canada and Australia, and the rates hosts can charge largely depend on where they’re located. In regions with high concentrations of pools, such as Scottsdale, Arizona, the going rate tends to be around $35 to $40 an hour, whereas in the New York area, hosts can charge $50 to $100 easily.

For those looking to stray a little farther from home, interest in RVs has soared. A vehicle that functions as a car, hotel room, and traveling kitchen may be the ultimate tool for social distancing vacations… especially for those looking to hike at National Parks – another activity showing a notable increase in interest. No surprise, shares of RV maker Winnebago (WGO) are up almost 200% from their March lows.

Home-improvement retailers Home Depot and Lowe’s and farm store chain Tractor Supply (TSCO) are all profiting off people spiffing up their backyards.

As I cautioned in the June 12 Empire Financial Daily, I worry that Home Depot and Lowe’s have pulled forward a lot of future home-improvement demand. While I don’t expect sales to decline, the growth rate of sales could slow down – which may be a problem with both stocks up 65%-plus from their March lows.

Tractor Supply looks interesting, since its feed and other consumables businesses should underpin sales. But I wouldn’t make it a full position at the current valuation, since its valuation is a little rich for a company that may only grow earnings per share in the mid- to high-single-digits once the pandemic bump passes.

Connected fitness company Peloton is also trading at an all-time high and has done well since I wrote about it on June 9, but its stock is probably overdue for a breather. I feel similarly about cooler and outdoor products maker Yeti (YETI), which hit an all-time high this week.

Two specialty retailer stocks that have done well lately but are still below all-time highs are boat seller MarineMax (HZO) and RV seller Camping World (CWH). I plan to look a little deeper into Camping World – which has an interesting niche. Manufacturing shutdowns have constrained the supply of new RVs, so realized pricing should be great at Camping World… but if inventory shortages constrain topline growth in the short term, we might get another chance at this one lower.

The market seems to already be dialed-in to the stocks of the stay-at-home summer, with few bargains to be had. But these are all names worth putting on your watchlist… and I’ll revisit in a future Empire Financial Daily if they pull back.

► In today’s mailbag, readers weigh in on airline bailouts and another staycation winner, Wayfair (W)…

What have been your best purchases of the spring/summer? For me, my favorites are a new BBQ grill and giant unicorn pool float. Is there anything you are on the hunt for but can’t find? I would love to hear at [email protected].

► “Should taxpayers get equity for bailout loans? Of course, they should.” – John R.

► “Stake in Airlines! YES. There ought to be SOMETHING for those tax dollars of support to airlines. I vote yes.” – Dave S.

Berna comment: I couldn’t agree more with both of you. Capitalism shouldn’t be about “heads we win, tails the taxpayer loses.” I’m worried about the management behavior we’re incentivizing when there’s aid without financial consequences.

► “Hi Berna, your content, expertise and writing quality are wonderful. I want to point out a startling fact about one of the companies you previously wrote about. Wayfair hit a low of $21.70 per share on March 19 and hit a high today, June 22 at $221.54. This is a ten-bagger in three months! I find this stunning and have not previously experienced this type of performance which would be outstanding over fifteen years. All the best.” – Jacques R.