1) In yesterday’s e-mail I gave a shout-out to Nate Anderson’s Hindenburg Research for exposing the total fraud at Chinese real estate and infrastructure development company Yangtze River Port and Logistics (YRIV). When it rains, it pours. Another Hindenburg target, Indian filmmaker Eros International (EROS), got cut in half yesterday. Here’s Hindenburg’s tweet about it: 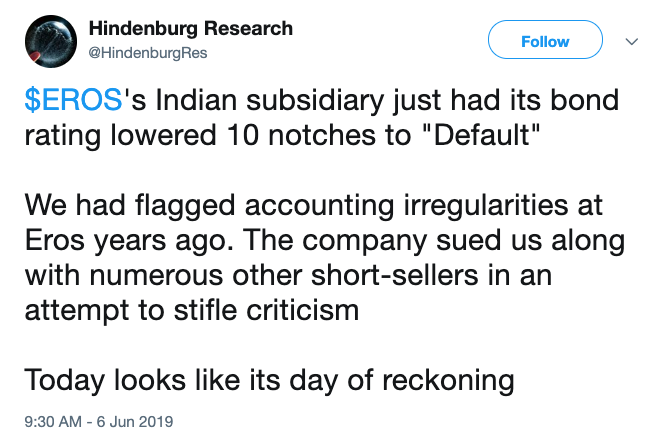 Anyone tempted to bottom-fish this, beware! This stock is likely a zero…

P.S. Here are links to Hindenburg’s two reports on the company in August 2017, when the stock was around $10 (it’s around $4 today): Eros Earnings Review: An Abundance Of Red Flags and Eros International: New Receivables Accounting Red Flags.

2) Speaking of short-sellers who do great research and have good instincts, my friend Andrew Left released a report yesterday on commercial payment provider FleetCor Technologies (FLT), which he calls “a hedge-fund hotel,” meaning the stock is widely owned by hedge funds. The stock has been a monster, up nearly 10 times since it went public in 2010, and this week CNBC’s Jim Cramer called it a “terrific” buy-and-hold fintech play. But Left calls it “one of the largest clean energy frauds in U.S. history” in this report.

3) In yesterday’s e-mail I had some fun with the crypto kid who paid $4.57 million to have lunch with Warren Buffett, which reminds me that I really enjoyed Ben Mezrich’s new book about the Winklevoss twins, Bitcoin Billionaires: A True Story of Genius, Betrayal, and Redemption.

It picks up where Mezrich’s last book, The Accidental Billionaires: The Founding of Facebook: A Tale of Sex, Money, Genius and Betrayal (which was turned into the movie The Social Network), left off.

After they reached a settlement with Mark Zuckerberg, the Winklevii wanted to be venture capitalists, but no Silicon Valley start-up would take their money because Zuckerberg had blackballed them. Here’s what happened next, as described in this review of the book in the New York Times: Spend Some Time With the Winklevii:

After months of fruitless searching for things to build, the dejected twins head to Ibiza for a break – the first “real vacation in their entire lives,” Mezrich notes, implausibly. They mope to a dance party, and that is where they bump into a Brooklyn entrepreneur who is touting Bitcoin as the Next Big Thing.

The twins get excited, do some research, talk to Dad, and invest in an online company that makes it easier for people to acquire the digital currency. Then they use some of their Facebook winnings to buy about 1% of the world’s total outstanding Bitcoins. Their timing is great – Bitcoin is dirt cheap in 2013 – and as its value rockets higher, the Winklevoss brothers get richer and richer. They go to really great parties. And some of their Silicon Valley haters eventually embrace them, old wounds salved by new wealth.

P.S. The Winklevii spoke at my conference to 500-plus people in New York City on September 17, 2013, when bitcoin was around $130. Here are the 25 slides they presented. In the post-conference evaluation forms, the attendees rated them the worst, by far, of the 21 speakers. The Winklevii sure had the last laugh on us!

4) Stories like this next one scare the pants off me because they underscore how easy it is to destroy a reputation built over a lifetime – in this case, in a matter of seconds: Warriors minority owner Mark Stevens banned, fined for shoving Kyle Lowry. I’m not aware that Stevens has a pattern of behaving like a raving lunatic – but in doing so for a few seconds, he’s paying a big price… Excerpt:

After shoving Lowry after he fell out of bounds and into courtside seats on Wednesday night, Stevens — a venture capitalist and billionaire who took over Vivek Ranadive’s minority ownership share of the Warriors in 2013 — will no longer be allowed to attend Finals games, will be banned from team activities for a year and will be fined $500,000.

… With just over 10 minutes left in the fourth quarter of Wednesday’s Game 3, Lowry leaped into the seats to save a loose ball, colliding with two fans in the front row, and knocking one back. As he tried to stand up, two seats over, Stevens placed a hand on Lowry’s left shoulder and shoved him.

… In a statement released early Thursday evening, Stevens accepted responsibility for his actions, saying he was “embarrassed” by what transpired and accepted the punishment meted out by the Warriors and the NBA.

“What I did was wrong and there is no excuse for it,” Stevens said. “Mr. Lowry deserves better, and I have reached out today in an attempt to directly apologize to him and other members of the Raptors and Warriors organizations. I’m grateful to those who accepted my calls. I hope that Mr. Lowry and others impacted by this lapse in judgement understand that the behavior I demonstrated last night does not reflect the person I am or have been throughout my life. I made a mistake and I’m truly sorry. I need to be better and look forward to making it right.”

5) Now that I’m no longer managing money, I’d like to find a great home at a NYC-based fund for my longtime right-hand person, Kelli Alires. She has a unique skillset that would be invaluable to a small, independent fund manager like I was – I’d guess the sweet spot would be someone managing at least $50 million and looking to grow.

Over 15 years, Kelli handled routine communication with our 200-plus investors, worked with our prime broker, lawyers, accountants, and other service providers, dealt with compliance matters (including routine SEC audits), set up credit card and bank accounts, paid all bills, organized events, etc. In short, she took care of pretty much everything so that we could focus on two things: raising money and managing it successfully.