In my Empire Financial Daily essay last Thursday, the buzzword was 'recession'...

We discussed what recessions are, how they happen, and whether they really matter to the stock market or our strategies.

This week, we want to tackle another big economic buzzword – inflation – and consider some of the same questions.

The first issue to address is what exactly is happening with inflation.

Obviously, everybody knows that inflation has been up over the past year. There are two main theories behind why this is happening...

One theory is based on monetary policy. The idea is that as the Federal Reserve injected more monetary liquidity into the economy as a response to the coronavirus pandemic, the greater number of dollars led to people paying more for goods and services.

Historically, this has happened when governments decide to print a lot more currency, and there's no reason to think it isn't having an impact in the current situation.

The other theory is based on the concept of supply chain disruption. Across the past 30 years, we had developed extremely efficient supply chains for most goods that integrated many companies across the globe.

No one had ever anticipated a situation where everything would be shut down everywhere. Furthermore, there were additional barriers in place to prevent transportation across borders.

While the modern supply chain is very efficient, it came at the cost of fragility. So much so that even as COVID-19 has faded, the global supply chain has had difficulty adjusting.

In addition to these two drivers, there's been another clear impact on global inflation – the Russia/Ukraine conflict.

This is what's called an "exogenous" or unexpected shock.

Prices were already headed higher prior to Putin invading Ukraine, but the invasion was the equivalent of throwing gasoline onto an already burning fire – especially in the energy markets.

However, the critical question is which of these factors are dominant, because that will dictate how long the current inflation persists...

If it's primarily monetary driven, the Fed will have to remove a substantial amount of monetary liquidity, and this could drive the U.S. into a recession.

If it's primarily supply chain driven, supply chains should recover and adapt, and inflation should fall without the Fed resorting to such drastic measures.

The reality is that demand for goods and services is not much higher than it was in 2019, and if monetary liquidity were driving prices, we would see much higher demand.

We previously saw asset price inflation driven by printing more money, and while we do think it has an impact on the price of goods and services, we don't think it's the primary factor.

Instead, we believe that the completely unprecedented disruption to our modern supply chain is the primary culprit. Throw in some Putin-led disruption and we get a nasty cocktail of 40-year high inflation. 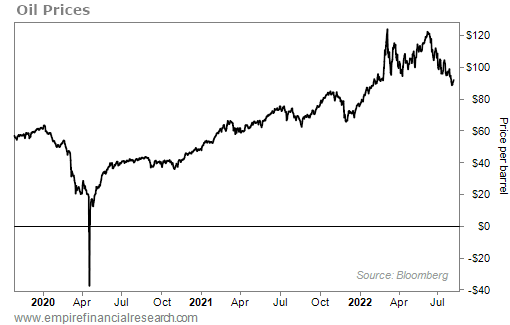 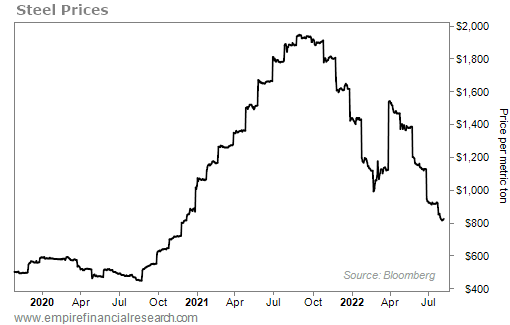 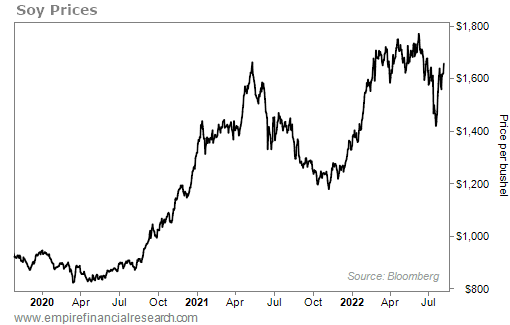 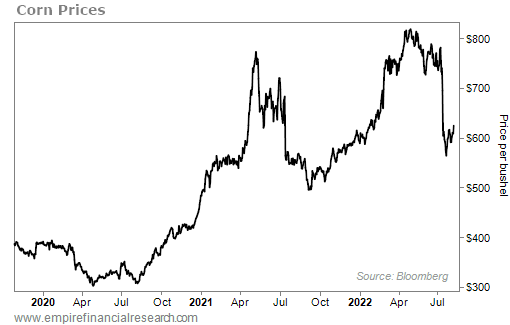 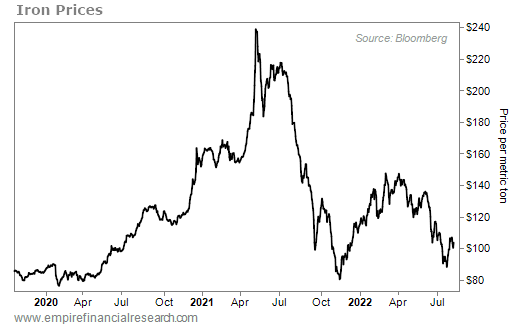 See a pattern? All of them were up a lot and are now coming back down.

Combined commodities make up about one-third of the inflation index.

Commodities are only part of our spending though, and there are two other big components to inflation...

I'm talking about housing and labor. 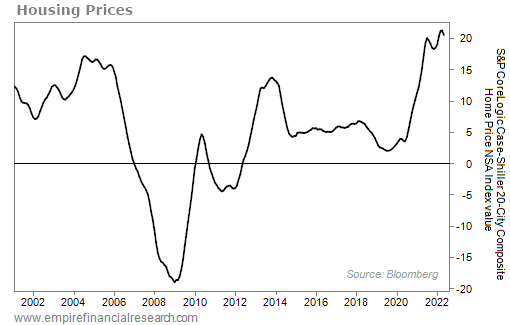 Another aspect of housing costs are mortgage rates. Here's that chart... 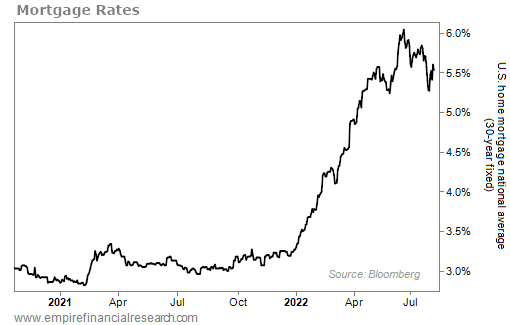 These costs are still running hot, but the leading indicators on housing prices strongly point to a slowdown in the housing market, indicating that prices should at least stabilize.

Net-net, it looks like there could be some relief coming in this crucial area... 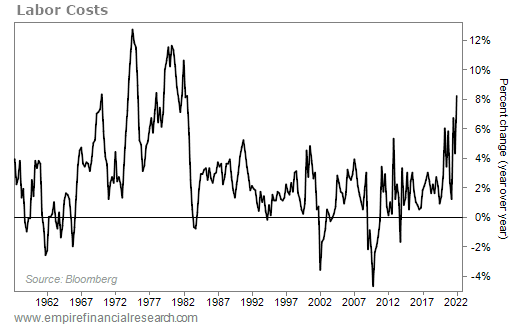 This chart looks the worst when we're looking for signs that inflation will come down, but it's the most important one.

Labor costs make up around 25% of direct inflation but have an additional impact, as higher wages can drive higher demand and higher prices.

However, our view is that two-thirds of inflation drivers heading down along with the Fed still pushing interest rates higher will lower inflation.

Remember, part of this is just mathematical...

This means, though, that soon we will be comping against these numbers, and it will be harder for inflation to be up that much year over year. It's a lot easier to post big numbers against 2% rather than 9%.

As a result, we think we're about to see one of the steepest declines in inflation since the early 1980s!

Well, it is... But the real question is – is it good enough?

In our view, it is and will add stability to the economy.

While publicly the Fed is focused on a 2% inflation target, we think it will be happy with anything under 5%.

That's an amount where movements in price are not disruptive to the economy, and we think it's the real number the Fed is focused on...

Based on the movement in leading indicators along with tougher comparables, we think we could reach that goal by the end of 2022.

That also means we could see the Fed relax the pace of interest rate increases by year end. That stability would be good for both the economy and stocks.

No matter what happens, we'll continue to find opportunities for quick gains with long-term winners that have been punished on investor overreactions. These setups give us a great chance to buy shares at a discount – including the latest trade in my Empire Elite Trader service. Find out how to gain instant access right here.