Greensill, Softbank & Cooking the Books; Pandemic dashboard and forecast; My family and I are getting vaccinated; Russia, China, and Iran are spreading vaccine disinformation

1) U.K.-based supply chain finance company Greensill Capital blew up last week and filed for insolvency protection on Monday. Here's a Bloomberg article about it: Greensill, Gupta and the Fragile Tower of Money and Metal.

Most American investors haven't paid much attention, as it hasn't affected them (though JPMorgan Chase (JPM) and Apollo Global Management (APO) are competing to buy Greensill's core business). But I think wise investors will study what happened here because there are many lessons – in particular, how to spot the warning flags, so you don't become ensnared in a similar situation. Believe me, complex financial schemes like this are a dime a dozen!

To start, I suggest reading what forensic accountant (and my former student) Stephen Clapham of Behind the Balance Sheet posted last summer, when Greensill was valued at $3.5 billion – he nailed it: Greensill, Softbank & Cooking the Books. Excerpt:

These conflicts shine a light deep into the business model of Greensill. They reflect a firm trying to jumpstart a market whose core growth just isn't there. This gets us back to the idea of what it takes for a new asset class to take root. The SG Warburg chaps didn't have to rely on Autostrade to buy its bonds. And the KKR trio didn't have to rely on RJR Nabisco management to buy their leveraged loans (and not because they thought they were "funny money," "play dough," or "wampum" – to quote Barbarians at the Gate). Net out the assets that feature on the supply side and the demand side of the ledger, and the underlying growth in Greensill's supply chain finance market shrivels up.

When it comes to asset class innovation, Lex Greensill ticks the first box. He is an outsider. But he doesn't tick the second – the growth in supply and the growth in demand are not in balance.

And that's not all. Dig deeper still and more red flags emerge...

Pioneering new asset classes is hard. The authors of The New Financial Capitalists write, "The essential populism of American culture is uncomfortable with financial schemes, which have so often been associated with venal fraud and scandal, or worse, unfruitful labour."

In the case of supply chain finance, it is not clear there is natural demand and so pioneers need to shimmy it along. The result is an institution drawn to scandal which itself raises several red flags. No one comes out of this looking good – not the pioneer, nor its main investor, nor the companies it services (indeed, with several of them having gone bust, stock pickers could do worse than to screen the rest for ideas). Perhaps it takes more than a zero interest rate environment to spawn a new asset class; perhaps authentic new asset classes only come along once every twenty years.

We have three main takeaways:

There are many other questions, like who was investing in this toxic fund? We believe that it was a high ticket entry and professional investors should have been asking these obvious questions. We also wonder what made the credit insurers withdraw cover, but then why did they extend it in the first place?

In summary, Stephen told me: "I think Credit Suisse and Tokio Marine could be in for as much as a $5bn hit."

John Hempton of Bronte Capital also explores this topic: Greensill – who is holding the bag?

2) I continue to closely follow the pandemic, sending lengthy e-mails to my coronavirus e-mail list roughly once a week. If you'd like to receive them, simply send a blank e-mail to: [email protected].

Further below is an excerpt from the e-mail I sent to my readers yesterday (you can read the entire e-mail here).

I especially want to flag No. 3, where I publicly disclose for the first time that I've been vaccinated. I've hesitated to do so until now because there will no doubt be some folks who will accuse me of cutting the line (I didn't).

But nevertheless, I'm sharing this information because I think it's critically important that as many of us get vaccinated as soon as possible so that we can quickly get to herd immunity and put this terrible pandemic behind us.

A huge obstacle to achieving this, however, is overcoming widespread doubts about the vaccines by tens of millions of Americans (disproportionately Black people and Republicans) – due, in part, to disinformation campaigns by Russia, China, and Iran (which I discuss below).

One way we can help offset this and get people off the fence and into a vaccination center is to create a tidal wave of enthusiasm – what researchers call "social proof." So, all of us who get vaccinated – especially people like me (and, far more important, Black and Republican leaders) with the ability to reach large numbers of folks – need to shout from the rooftops that we've been vaccinated and we feel great!

Here's a picture of me getting my second shot of the Moderna vaccine on Friday (I had almost no side effects from either shot): 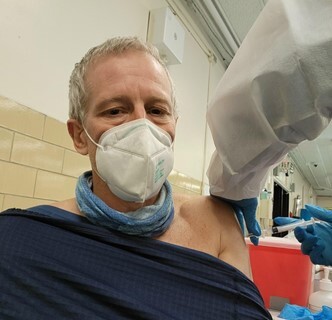 1) The news regarding the pandemic continues to be extraordinarily good. Let's start with my usual dashboard:

As you can see from the charts below (source), cases, hospitalizations, and average daily deaths are plunging – they're now down 78%, 69%, and 54%, respectively, from their peaks only two months ago (it's particularly good to see cases continue to fall, after they'd ticked up for a week, raising fears that variants could be having an impact): 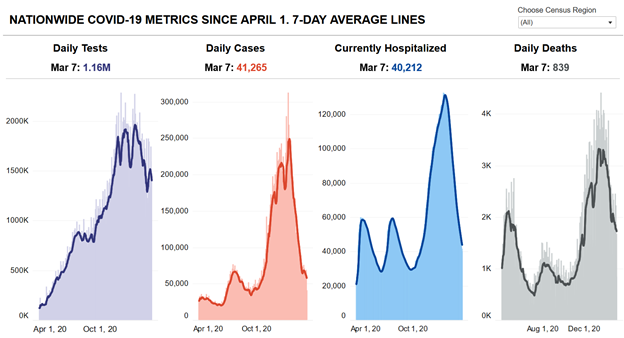 As I projected in my last e-mail, the number of vaccinations per day has rebounded strongly and is now averaging a record high of 2.2 million per day (source): 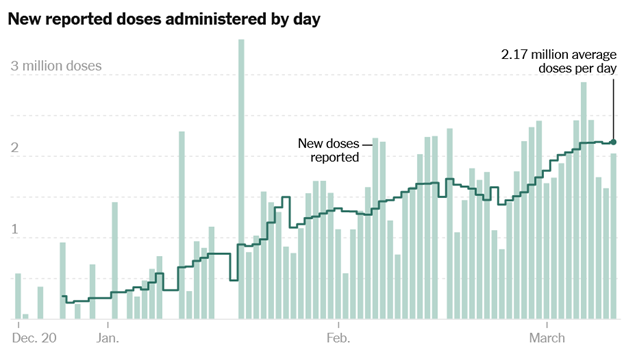 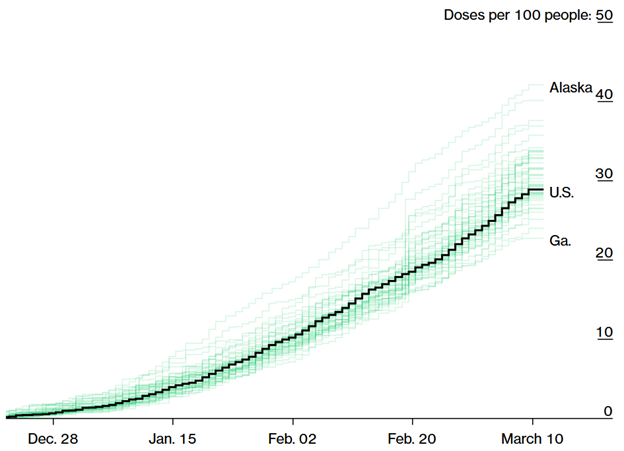 As a result, 19% of Americans have received one shot and 9.9% two, led by Alaska at 26%/16%, with Georgia dead last at 13%/8.6% (source). Here's a great story about how Alaska has been so successful: Alaska's Remote Villages Race Against Time and History.

We continue to be among the world leaders in vaccinating our population, trailing only the U.K. among major countries (source): 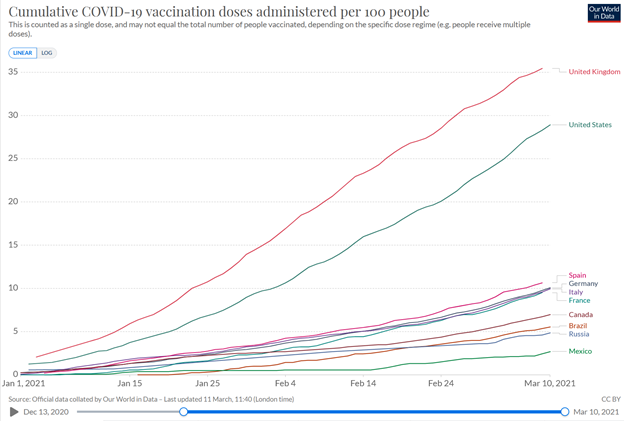 2) My friend Joe Golton has been spot-on with his forecasts. Here's his latest update:

I am expecting a minor surge in the U.S. starting [in] three to 10 days, as people are loosening up on masks, restaurants, etc. as the numbers come down – plus the variants. I think it will be smaller than the prior three surges, not last all that long, and dwindle down to almost nothing by late May.

3) Every bit of evidence shows that the COVID vaccines are nothing short of a MIRACLE!

Thus, I can't tell you how thrilled I was to get my second Moderna shot last Friday (as part of my volunteering for three 12-hour days at a vaccination center in the South Bronx, checking in hundreds of people).

My parents flew all the way from Kenya and spent a month in New Hampshire to get vaccinated. They got their second shots last Friday as well and are flying home shortly. My wife also volunteered and is getting her second shot this week.

My middle daughter, a senior at Wake Forest in North Carolina, qualified to get vaccinated because of her campus job and received her first shot last week. Lastly, my youngest daughter just found out that she needs to be vaccinated for her job as a camp counselor this summer, so she'll get it as soon as she returns from the gap-year program in Central America (she's currently in Guatemala and then is going to Costa Risa, where the 10-week program finishes).

In short, the Tilson family is ALL IN on getting vaccinated, with no hesitation whatsoever!

If you read a negative article online about COVID vaccines, there's a very good chance that it was planted by Russia, China, or Iran, as this article notes: Here's how U.S. foes are bending the truth about vaccines online. Excerpt:

Russia, China, and Iran are pushing misleading claims online about Western vaccines as part of a broader effort to promote their own responses to the coronavirus as superior.

A new report from the German Marshall Fund's Alliance for Securing Democracy illustrates how public officials and state media outlets tied to these U.S. adversaries frequently deceptively promoted safety concerns about the vaccines, while playing down or omitting critical context. The Pfizer vaccine, which was the first to win approval from regulators, received the most unfavorable coverage by far.

Researchers found that 86 percent of the 50 most-retweeted tweets from Russian state media outlets about Pfizer mentioned either bad reactions to the vaccine, including deaths, or negative reports about the company itself. They also found that 92 percent of mentions of Pfizer in Iranian government and state media tweets were negative.

So, if you choose to believe the lies you read online and not get vaccinated, you're not only endangering yourself, your loved ones, and your fellow Americans and prolonging this terrible pandemic here, but you are also providing Putin, Xi, and Rouhani cause for celebration. Is that really what you want???

In the rest of my e-mail, I covered: