1) In my February 3 e-mail, I analyzed the financials of energy giant ExxonMobil (XOM) and what I found wasn’t pretty: declining revenue, net income, and operating cash flow… combined with rising capital expenditures. The result is insufficient free cash flow to cover the company’s hefty dividend payments, which are instead funded with rapidly rising debt and asset sales. Worst of all, ExxonMobil tries to obfuscate this reality with highly misleading disclosures to investors. I concluded:

ExxonMobil looks like a classic value trap – a melting ice cube that doesn’t come within a country mile of covering its dividend, which it will likely eventually be forced to cut (though not for a few years I suspect)…

I’m not the only one to reach this conclusion – Goldman Sachs analyst Neil Mehta downgraded the stock to a rare “sell rating” last week, as reported in this MarketWatch article: Exxon Mobil’s stock drops to decade low after Goldman says it’s time to sell. Excerpt:

Shares of Exxon Mobil Corp. sank Monday to the lowest prices seen in a decade, after Goldman Sachs analyst Neil Mehta said it was time to sell, citing concerns that the oil giant is on track to come up well short of its target for investment returns…

Mehta downgraded Exxon to a rare sell rating, after being at neutral for at least the past three years. He slashed his stock price target by 18%, to $59 from $72…

“The core of the Exxon bull case has been predicated on the company improving its return on capital, with a 15% ROCE 2025 goal set out [at] the 2018 Analyst Day,” Mehta wrote in a note to clients. “We see clear downside risk to this goal, with our own modeling showing an 8% ROCE in 2025 on a combination of lower downstream margin assumptions, lower crude price forecasts and risk around execution/capture rates.

2) Speaking of stocks to avoid, investors have fallen hard for the growth story surrounding China’s Luckin Coffee (LK)… awarding the company a $9.3 billion market cap, which is equal to a nosebleed 19.5 times trailing revenues. I saw Luckin’s presentation at the ICR Conference last month and have to admit that I was impressed.

But as with so many other Chinese companies (it remains the Wild West over there), Luckin may not be all that it claims to be, as MarketWatch highlights: Luckin Coffee stock sinks after anonymous report alleges fraud.

For more color on this, I e-mailed my friend, famed short-seller Carson Block of Muddy Waters Research, who released the report on behalf of the author (who wishes to remain anonymous for good reason: China has been known to harass and even imprison those who publish negative articles about companies, no matter how accurate the information).

Carson e-mailed me the full 89-page report and said I could share it, so I’ve posted it here. He added:

I know who wrote it, so when I Tweeted it, I wrote “unattributed” as opposed to “anonymous.” He’s a serious, smart money guy.

When Luckin Coffee (Nasdaq: LK) (“Luckin” or the “Company”) went public in May 2019, it was a fundamentally broken business that was attempting to instill the culture of drinking coffee into Chinese consumers through cut-throat discounts and free giveaway coffee. Right after its $645 million IPO, the Company had evolved into a fraud by fabricating financial and operating numbers starting in third quarter 2019. It delivered a set of results that showcased a dramatic business inflection point and sent its stock price up over 160% in a little over two months. Not surprisingly, it wasted no time to successfully raise another $1.1 billion (including secondary placement) in January 2020. Luckin knows exactly what investors are looking for, how to position itself as a growth stock with a fantastic story, and what key metrics to manipulate to maximize investor confidence. This report consists of two parts: the fraud and the fundamentally broken business, where we separately demonstrate how Luckin faked its numbers and why its business model is inherently flawed.

I haven’t done any research on Luckin, but after reading the report, I think it’s very well done.

3) Following up on Thursday’s e-mail, in which I included a column by New York Times columnist Nicholas Kristof about U.S. Bancorp (USB), here’s Kristof’s follow-up (with a good point at the end):

Last week, I told how U.S. Bank had fired two employees who had used $20 of their own money to help a stranded customer. Within hours of the column going online, I received a call from the bank’s CEO, Andrew Cecere, who previously wouldn’t return my calls, apologizing and saying that he would correct the situation.

Here’s an update. Abigail Gilbert, the manager who was fired, confirms that she will return to her old job. Cecere says the bank is talking with Emily James, the other fired employee, about a job with more responsibility and higher pay; she is also discussing jobs with other companies.

This all sounds promising, but indignant columns are not a scalable solution to the problem of labor injustices.

4) In my January 31 e-mail, I wrote about my perhaps over-the-top minimalist packing (I shared my tips in my July 19 e-mail) and my latest purchase, the Matein Waterproof College Wheeled Travel Backpack.

I tested both on my recent trip to Kenya, traveling for a week in different environments – ranging from beaches to safaris – and was able to fit everything I needed into the backpack. It performed like a champ! Here’s a picture of it – completely stuffed – outside the house we rented in the Ol Pejeta wildlife conservancy: 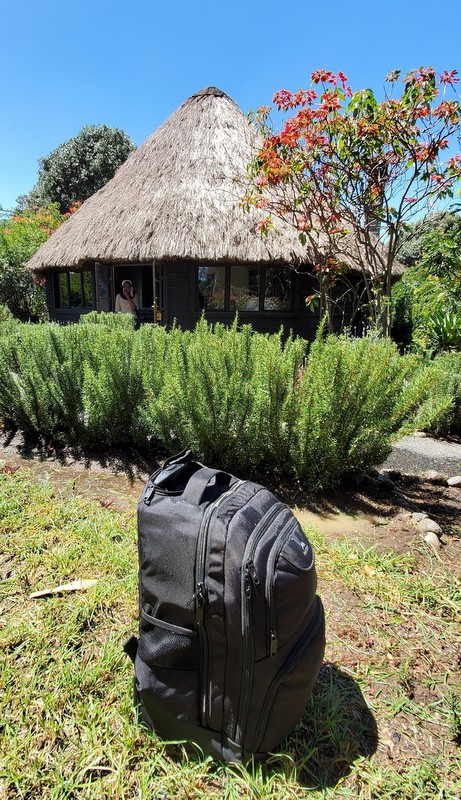