Get ready: another massive wave of layoffs is about to hit the U.S. economy; Jobs Recovery Risks Stalling Out; Is There Really a 'Looming Bank Collapse?'; Buffett Missed Out on Crisis; Parallels between climbing and investing

1) Daniel Alpert, a founding managing partner of the New York investment bank Westwood Capital, has a well-reasoned – and troubling – prediction: Get ready: another massive wave of layoffs is about to hit the U.S. economy. Excerpt:

It was the second week in a row that the level of claims stayed basically even against expectations of large declines. That suggests that the recovery in the jobs market from the depths of the Covid-19 crisis is losing speed. Indeed, with the pandemic flaring up in many regions of the U.S., there is a danger the country could reverse the employment gains it recorded in the May jobs report...

Moreover, in some places where the virus has reasserted itself, the data suggest the jobs market is deteriorating. In Arizona, which has been hitting daily highs in new Covid-19 cases, employment was down an average of 29.6% in the week ended Wednesday, compared with 26.6% a week earlier. 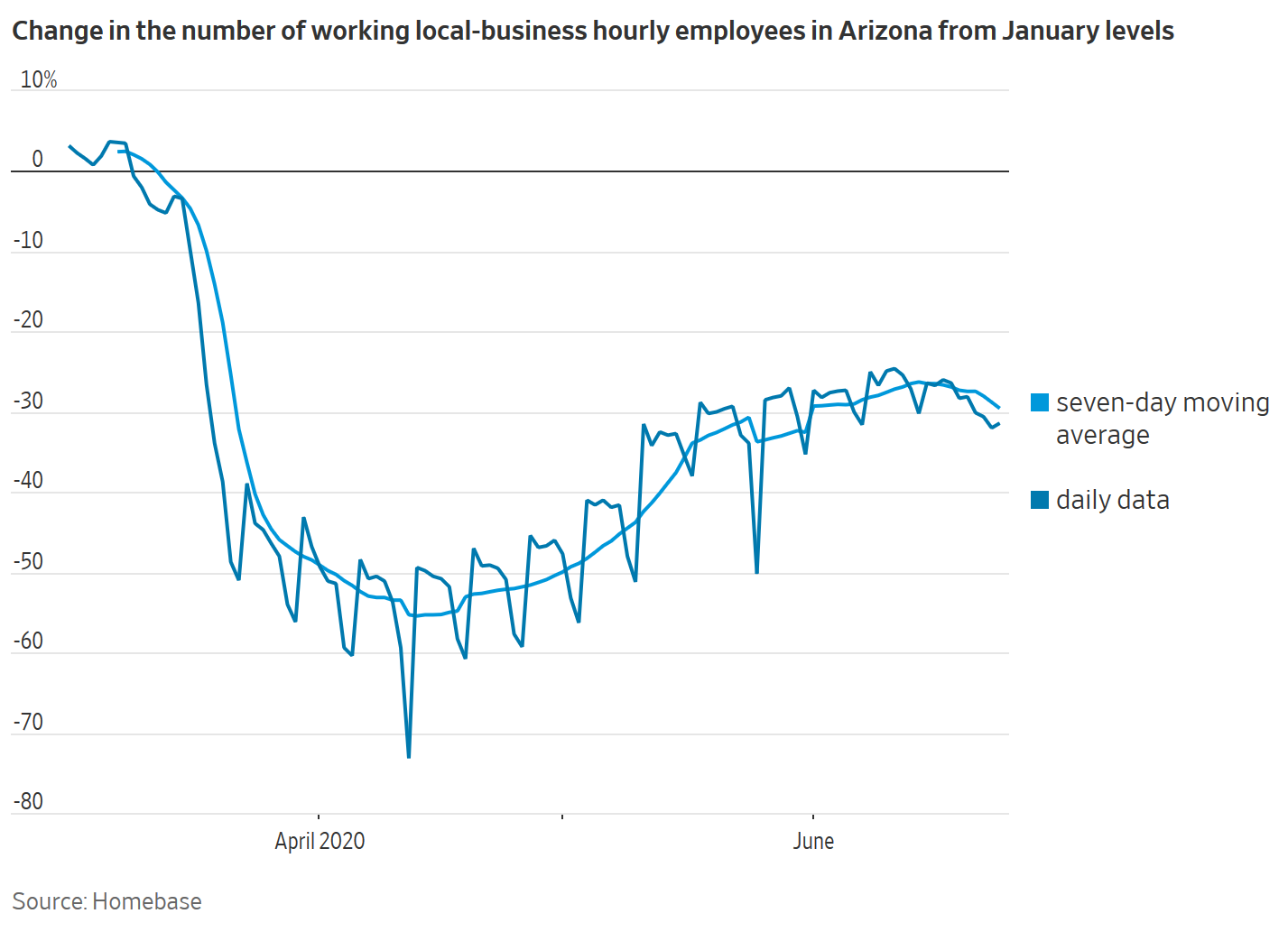 3) While we may not have a V-shaped recovery that many people are hoping for, I'm not as uber-bearish as UC Berkeley law professor Frank Partnoy...

He recently published a frightening article in The Atlantic that's circulating widely: The Looming Bank Collapse: The U.S. financial system could be on the cusp of calamity. This time, we might not be able to save it.

This recent WSJ article raises similar concerns: How Coronavirus Upended a Trillion-Dollar Corporate Borrowing Binge and Kicked Off a Wave of Bankruptcies. Excerpt:

The coronavirus pandemic hit U.S. businesses at a bad time. Companies had loaded up on debt after years of low interest rates, buyouts and increasingly lax lending standards.

Much of that borrowing was bankrolled by an elaborate ecosystem of debt funds called collateralized loan obligations. CLOs buy up risky corporate loans and turn them into supposedly safe bonds that are bought by banks, insurance firms and other global investors.

Those securities are now struggling because of the economic slowdown. Debt-laden companies like Neiman Marcus, Hertz, and J.Crew have already gone bust. That has ricocheted back to the CLOs that own their loans. Prices have been volatile and investors are reassessing the risks of CLOs, crimping the supply of credit when it is needed most.

In her Empire Financial Daily on June 19, my colleague Berna Barshay shared her in-depth thoughts on this issue, concluding:

We're a long way away from seeing the AAA tranches of these CLOs take a hit...

While The Atlantic article is likely overdramatic, the CLO market is something that investors in banks and insurance companies should keep an eye on...

Like Berna, I think Partnoy's and the WSJ's concerns are overblown, for reasons that are well articulated in this blog post: Is There Really a 'Looming Bank Collapse?' Excerpt:

At the Center of Professor Partnoy's piece are Collateralized Loan Obligations (CLOs). These bear some similarities to the confusing similarly named instruments Collateralized Debt Obligations which were at the center of the 2007-2008 crisis. CDOs were securities made up of risky mortgage backed securities, themselves made up of individual mortgages. Collateralized loan obligations meanwhile are made up of individual loans to corporations which already have large amounts of debt. The parallel is obvious and extremely attractive to journalistic accounts of financial markets looking to repeat the drama and intrigue of 2008. Could the banking system collapse in a similar fashion to the way it did in 2008?

Under the surface however, this narrative cracks.

4) Historically, articles like this have been a great sign that Berkshire Hathaway (BRK-B) is a buy! Buffett Missed Out on Crisis, Revealing Berkshire's Big Weakness. Excerpt:

Berkshire's size is Buffett's achievement but also a bit of a problem. While Buffett can drop large sums of money on a deal, he also needs bigger buyouts or larger stock purchases to move the needle for Berkshire. His failure to find those "elephant-sized" deals, as he's called them, recently has contributed to Berkshire's underperformance vs. the S&P 500 in the last five years.

Even during the tumultuous market in March that started chipping away at stock valuations, Buffett was relatively quiet. That's fueled questions about what shareholders actually get when they invest in Berkshire. If they aren't reaping the benefit of Buffett's ability to strike unique and complicated deals similar to ones he's pulled off in the past – such as the BNSF buyout and the preferred stock investments with companies including Goldman Sachs Group Inc. – are they simply getting an oversize conglomerate chock-full of old-fashioned industrial businesses and retailers?

5) I can see some interesting parallels between climbing and investing. Both are extremely fun – even addicting – activities, but they can also be extremely dangerous... as you can easily and unexpectedly get killed (literally in the case of climbing, and figuratively and financially in the case of investing).

So, if you're an amateur (as I am in climbing), that's fine – but it means that you would be wise to hire a trusted guide to keep you safe (as I've done over the past two weeks)...