1) In Friday's e-mail, I quoted my friend and retail expert David Berman of Durban Capital, who blasted Kohl's (KSS) on its "myopic" and "foolish" share repurchases, arguing that "this is a classic example of how a weak CEO and board can possibly put a retailer into bankruptcy."

Over the weekend, I took a look at Gap (GPS) – the retailer's share repurchases have been even more reckless and value destroying.

At less than $10 per share today, the stock is back to a level it first reached more than a quarter century ago, as you can see in this chart: 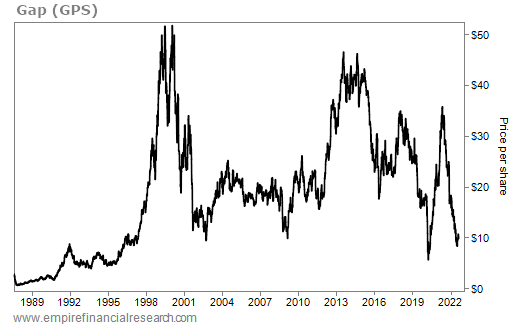 To understand the role of share repurchases in the company's history, I first looked at Gap's free cash flow (operating cash flow minus capital expenditures), going back 30 years. As you can see from this chart, the company has steadily generated substantial amounts: 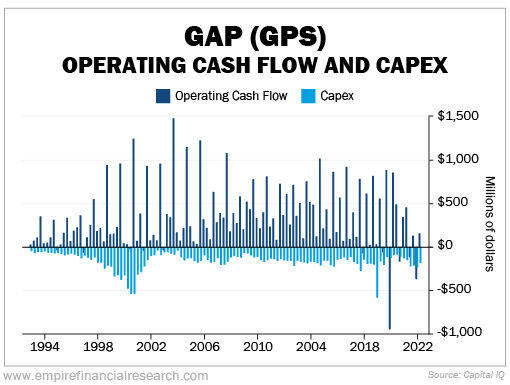 In total, from the first quarter of 1993 through the first half of this year, Gap has generated $39.1 billion of operating cash flow and spent $18.4 billion on capex, for a net of $20.7 billion of free cash flow.

Now let's look at how much the company has spent on share repurchases over the same period: 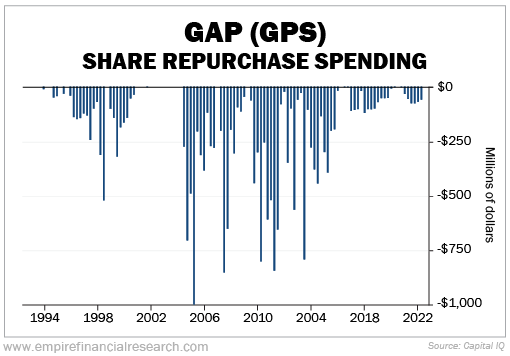 In total, Gap has spent $19.9 billion buying back its shares, equal to a staggering 96% of its free cash flow over the past three decades.

This has resulted in a huge 63% reduction in its diluted shares outstanding since the peak 18 years ago: 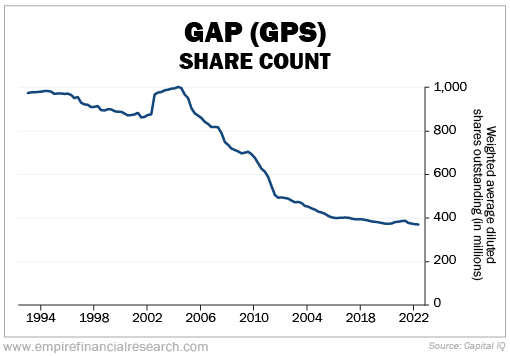 Yet this reduction in the share count hasn't generated any value for shareholders. In fact, since the peak in the number of shares outstanding in mid-2004, the stock is down roughly 60% in the 18 years since then – a truly dismal performance. 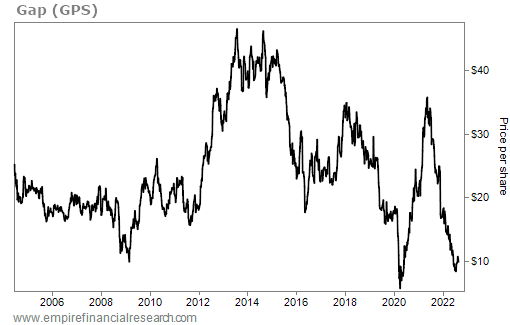 Put another way, Gap has spent $19.9 billion buying back its shares, yet today it has a market cap of $3.6 billion and an enterprise value of $9.3 billion.

Former president Donald Trump's Truth Social website is facing financial challenges as its traffic remains puny and the company that is scheduled to acquire it expresses fear that his legal troubles could lead to a decline in his popularity.

Six months after its high-profile launch, the site – a clone of Twitter, which banned Trump after Jan. 6, 2021 – still has no guaranteed source of revenue and a questionable path to growth, according to Securities and Exchange Commission filings from Digital World Acquisition, the company planning to take Trump's start-up, the Trump Media & Technology Group, public.

The company warned this week that its business could be damaged if Trump "becomes less popular or there are further controversies that damage his credibility." The company has seen its stock price plunge nearly 75 percent since its March peak and reported in a filing last week that it had lost $6.5 million in the first half of the year.

DWAC continues to be my No. 1 stock to avoid, as I see a lose-lose for shareholders.

The SEC will likely block the merger (for reasons laid out in previous e-mails), in which case DWAC will immediately crash by more than 60% to around the SPAC's cash balance of $10 per share. And if the deal goes through, DWAC will merge with a near-worthless business, plus shareholders will be massively diluted by a PIPE (private investment in public equity) deal that's almost surgically designed to destroy them (also as I laid out in previous e-mails).

3) I've long warned that you don't want to get COVID-19 because of the largely unknown tail risks of long COVID, which is still poorly understood.

When my 80-year-old dad got COVID at the start of this year, his symptoms weren't too bad and he recovered within a week – thanks no doubt to him being triple-vaxxed. But since then, he has felt quite weak when doing all of his usual activities – tennis, hiking, biking, horseback riding, etc.

My mom noticed that when he was sleeping, his heart and breathing were often irregular, so he got checked out by a cardiologist in his hometown of Nairobi, Kenya who diagnosed him with atrial fibrillation (A-fib), which the Mayo Clinic defines as:

An irregular and often very rapid heart rhythm (arrhythmia) that can lead to blood clots in the heart. A-fib increases the risk of stroke, heart failure, and other heart-related complications.

During atrial fibrillation, the heart's upper chambers (the atria) beat chaotically and irregularly – out of sync with the lower chambers (the ventricles) of the heart. For many people, A-fib may have no symptoms. However, A-fib may cause a fast, pounding heartbeat (palpitations), shortness of breath, or weakness.

Episodes of atrial fibrillation may come and go, or they may be persistent. Although A-fib itself usually isn't life-threatening, it's a serious medical condition that requires proper treatment to prevent stroke.

The Johns Hopkins website (5 Things You Should Know about Atrial Fibrillation) notes that five million Americans have A-fib, including 10% of those over age 80.

While here at Lake Sunapee, New Hampshire for August and September, my dad went to see a doctor at the Dartmouth Health teaching hospital, who recommended what has become a routine procedure called a catheter ablation, which has a 90% success rate in curing A-fib. The Hopkins website describes it as follows:

... this procedure guides a tube into your heart to destroy small areas of tissue that may be causing your abnormal heartbeat...

Catheter ablation can take between two and four hours to complete...

After the medication has taken effect, your doctor will numb an area in your groin and make a small hole in your skin. Then, the doctor will place three or four catheters through blood vessels to your heart to help guide the procedure.

After the catheters have been placed, electrodes at the ends of the catheters are used to stimulate your heart and locate the area that is causing the abnormal heart rhythm. Then, the doctor will use mild radiofrequency heat energy to destroy or "ablate" the problem area, which is usually quite small – about one-fifth of an inch in size. Other types of ablation techniques may be used, such as cryoablation, in which very cold temperatures destroy the problem area. Your doctor will decide which type of ablation therapy is most appropriate for you. Once the tissue is destroyed, the abnormal electrical signals that created the arrhythmia can no longer be sent to the rest of the heart.

My dad is having the procedure done at Dartmouth Health in Hanover starting midday on Friday, September 16. Because it won't finish until later in the day, he'll spend the night there and come back to Sunapee on Saturday. I plan to drive up the night before and spend the weekend there.

Here's a picture of me with my parents on Saturday: 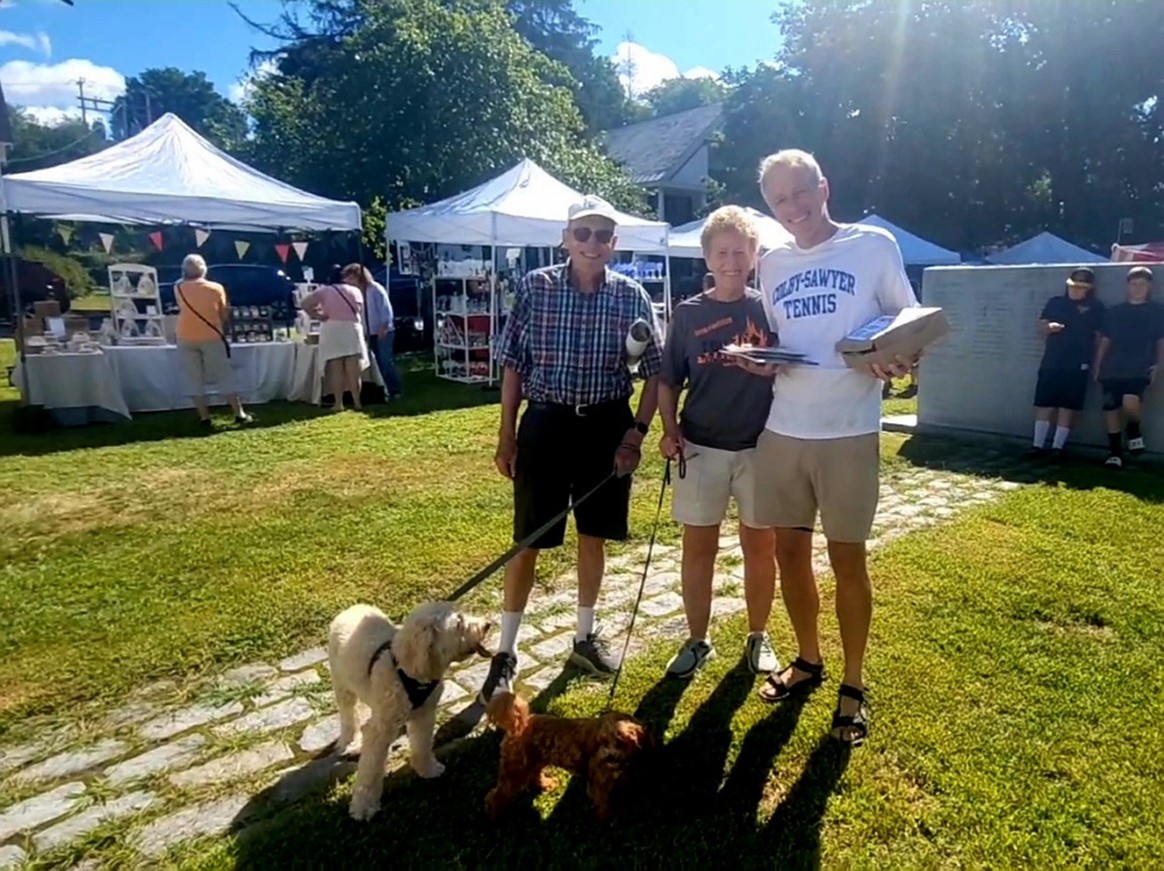