1) A final reminder that at noon Eastern time today, I will be joining my colleague Berna Barshay for Empire Financial Research’s Wealth Accelerator event to launch her brand-new newsletter, Empire Market Insider.

Tapping into her two decades of experience on Wall Street (following her graduation from Princeton and Harvard Business School) and her unique perspective as a woman in a male-dominated industry, Berna will be sharing her single best idea every month with her Empire Market Insider subscribers.

Berna’s track record – over her entire career, but especially since she joined our team at Empire – is nothing short of phenomenal.

In her free Empire Financial Daily e-letter over the past 14 months, Berna has been giving her nearly 200,000 readers great insights and numerous stock recommendations showing huge gains, which I highlighted in Tuesday’s e-mail.

Berna will continue writing Empire Financial Daily, of course, but will save her top ideas for Empire Market Insider readers.

The Wealth Accelerator event is 100% free to attend – just make sure to reserve your spot in advance. You can do so right here. (For folks who can’t make it at noon, sign up for the event anyway… We’ll be offering an encore presentation at 7 p.m. Eastern time for everyone who signs up but is not able to attend at 12 p.m.)

2) Forbes perfectly captures the mind-boggling foolishness and speculation in today’s markets with this cover story: 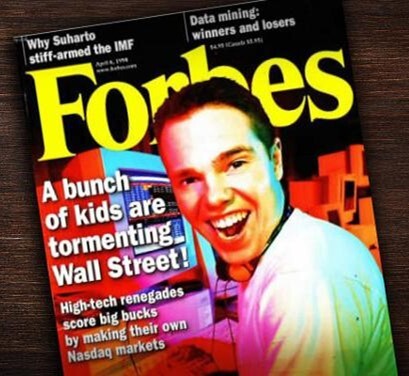 Not to toot our own horn, but this is why anyone who wasn’t in the markets back then should be listening to Enrique, Berna, and me: We experienced those crazy times leading up to and including the Internet bubble, and there are remarkable similarities to today.

In the markets, as in so many other things, the old saying applies: History doesn’t repeat itself, but it often rhymes, which is why having long experience is so important…

3) Retail investors are not only piling into the riskiest stocks, but they’re doing so with options, as this Wall Street Journal article notes: AMC, Other Meme Stocks Turn Options Market Upside Down. Excerpt:

The meteoric rally in meme stocks such as AMC Entertainment (AMC) and GameStop (GME) has unleashed a burst of options trading, upending traditional dynamics in the market for stock bets.

The rush into the stocks coincided with frenzied trading for options – contracts that allow investors to bet on price moves in stocks or protect their portfolios. The once-obscure corner of the market has boomed this year like never before, with many new investors trying their hands during the pandemic shutdowns.

The complicated contracts can be risky to use but have mushroomed into a feature of the meme mania this year. Some individual investors have said that they are drawn to the thrill of options trading, happy to take on higher risks for the prospect of big payouts. They have used the bets to turbocharge their positions, eager to ride the relentless momentum in stocks including GameStop, AMC, and Clover Health Investments (CLOV). 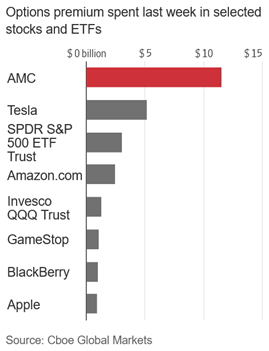 4) In light of this madness and the resulting hundreds of billions of dollars that retail investors are sure to lose, it’s good to see the U.S. Securities and Exchange Commission (“SEC”) exploring every possible way to reduce the casino-like aspects of our markets: SEC mulls GameStop, AMC ‘gamification’ crackdown with regulatory layer. Excerpt:

The Securities and Exchange Commission is weighing a significant crackdown on so-called meme stock investing that could impose additional regulatory burdens on low-and-no fee brokerages that have been at the center of processing trades of AMC Entertainment, GameStop, and other risky stocks, FOX Business has learned.

SEC officials have discussed whether they could impose upon brokerages, such as Robinhood, a regulation that could force the firms to warn investors about the pitfalls of buying these risky stocks before a trade is completed, according to people with direct knowledge of the matter.

Shares of these companies have exploded in recent days, buoyed by strong buying from retail day traders that trade stocks based on tips from message boards, such as Reddit’s “WallStreetBets,” and through easy-to-use trading apps such as the one offered by Robinhood. They’re also heavily shorted by hedge funds that believe shares are far over-valued given their business outlooks.

But SEC Chair Gary Gensler is worried these stocks are too easy to trade on Robinhood and elsewhere – and that investors could be setting themselves up for massive losses.

He has suggested that one way to deal with the “gamification” of trading epitomized in the wild run-ups in shares like AMC and GameStop is to force these brokers to act more like fiduciaries as opposed to passive trading platforms that merely process trades, these people say.

By imposing the regulation, known as “Regulation Best Interest” (Reg BI), Robinhood would have to “step in” and warn investors about the risk of trading some of these stocks, said one person with knowledge of Gensler’s thinking. The SEC has begun to scrutinize the wild trading in shares of the meme names which only last year were trading as penny stocks.

5) My wife and I experienced what this article is talking about last night: We were finishing dinner at a friend’s house in the West Village and decided to take a ride service home, but Via, Uber (UBER), and Lyft (LYFT) were all charging more than $50 for a ride that normally costs $25, so we took the subway instead… Farewell, Millennial Lifestyle Subsidy. Excerpt:

Now, users are noticing that for the first time – whether because of disappearing subsidies or merely an end-of-pandemic demand surge – their luxury habits actually carry luxury price tags.

“Today my Uber ride from Midtown to JFK cost me as much as my flight from JFK to SFO,” Sunny Madra, a vice president at Ford’s venture incubator, recently tweeted, along with a screenshot of a receipt that showed he had spent nearly $250 on a ride to the airport.

“Airbnb got too much dip on the chip,” another Twitter user complained. “No one is gonna continue to pay $500 to stay in an apartment for two days when they can pay $300 for a hotel stay that has a pool, room service, free breakfast and cleaning everyday. Like get real lol.”

Some of these companies have been tightening their belts for years. But the pandemic seems to have emptied what was left of the bargain bin. The average Uber and Lyft ride costs 40% more than it did a year ago, according to Rakuten Intelligence, and food delivery apps like DoorDash (DASH) and Grubhub (GRUB) have been steadily increasing their fees over the past year. The average daily rate of an Airbnb (ABNB) rental increased 35% in the first quarter of 2021, compared with the same quarter the year before, according to the company’s financial filings.

Part of what’s happening is that as demand for these services soars, companies that once had to compete for customers are now dealing with an overabundance of them. Uber and Lyft have been struggling with a driver shortage, and Airbnb rates reflect surging demand for summer getaways and a shortage of available listings.

In the past, companies might have offered promotions or incentives to keep customers from getting sticker shock and taking their business elsewhere. But now, they’re either shifting subsidies to the provider side – Uber, for example, recently set up a $250 million “driver stimulus” fund – or doing away with them altogether.