Enrique, Berna, and I are hosting an event in NYC to discuss our three favorite stocks; Elon Musk Plans to Rely More Heavily on Equity for Twitter Deal; A look at the housing market; Reader feedback on my colonoscopy

1) My colleagues Enrique Abeyta, Berna Barshay and I are hosting a free, exclusive private event in New York City for Empire Financial Research subscribers a week from today on Thursday, June 2 from 5:30 p.m. to 8 p.m.

We'll present our three favorite stocks, take questions, and then host a cocktail reception afterward from 7 p.m. to 8 p.m.

It will be at the IESE Business School, 165 W. 57th Street, across the street from Carnegie Hall.

The room only has capacity for 60 people, so if you'd like to join us, please register here.

For subscribers who aren't able to join us, we'll tape it and make the video and our slides available to you shortly afterward.

If you would like to attend or watch the video and receive the slides, but aren't an Empire subscriber, you can become one for only $49 by taking advantage of our special 75% discount to receive a full year of our flagship newsletter, Empire Stock Investor – just click here to subscribe and then click the link above to register for next week's event.

2) In my e-mail last Thursday, I wrote about Elon Musk's "shenanigans" surrounding his deal to buy Twitter (TWTR) and concluded:

I think the deal will go through because: a) Musk really wants to own Twitter... and b) his lawyers will make him aware that he'll likely have to pay many billions in damages if he reneges on the agreement he signed. But I do think there will be a negotiated agreement on a modestly (maybe 10%) lower price...

Sure enough, the stock jumped 5% this morning after a regulatory filing yesterday showed that Musk is proceeding with plans to finance the acquisition: Elon Musk Plans to Rely More Heavily on Equity for Twitter Deal. Excerpt:

Elon Musk is committing more of his wealth to finance his $44 billion deal for Twitter and seeking additional financial backers amid a sharp decline in Tesla (TSLA) stock in recent weeks.

Mr. Musk's funding plan now includes $33.5 billion in equity, up from $27.25 billion, according to a Wednesday regulatory filing. The billionaire Tesla chief executive no longer plans to rely on a margin loan backed by shares of his electric-vehicle company, which are down by about a third since Twitter accepted his bid in late April.

It couldn't immediately be learned whether the new financing arrangement signaled renewed enthusiasm from Mr. Musk about a deal he recently put into doubt. Mr. Musk said earlier this month that the transaction was "temporarily on hold," though he later added he was committed to buying Twitter.

The disclosure came hours after Twitter's chief executive told shareholders the company was proceeding with the deal.

I continue to think the deal will go through at a price significantly higher than today's level.

3) The U.S. housing market has been on fire since it bottomed during the global financial crisis...

However, many folks are concerned that housing prices may fall, due mainly to rising interest rates, though they are still low by historical standards, as you can see in this chart (also from the St. Louis Fed) of the rate for a 30-year fixed rate mortgage:

However, if we zoom into the past year, you can see that after reaching an all-time low of 2.77% last August, the average rate has nearly doubled to 5.25% today:

This obviously has a huge effect on what someone can afford to borrow and therefore pay for a house.

But will it be enough to cool the housing market – or even cause a crash?

My take: Yes to the cooling, but a decline in housing prices is unlikely, for reasons outlined in this in-depth Wall Street Journal article: Fed Searches for the Magic Number to Cool a Red-Hot U.S. Housing Market. Excerpt:

With a nudge from the Fed's recent interest rate increases, mortgage rates have risen almost 2.3 percentage points since November to 5.25% last week, the steepest rise in a six-month-span in decades. In the past, that kind of increase was usually enough for home buying and construction to fall sharply. Yet home prices could still hit new highs, even with sales starting to fall. Economists at Goldman Sachs (GS) estimate housing prices will grow around 10% this year; Bank of America (BAC) forecast 15%.

"This is a market as resistant to higher interest rates as you could possibly imagine," said Christopher Thornberg, founding partner at Beacon Economics in Los Angeles. "This is not a market that 5% interest rates are going to scare at all."

That leaves the Fed to decide how far and how fast rates need to go up to make a dent in the housing market without triggering a painful economic slowdown. Housing has been a traditional battleground in the fight against inflation because it is sensitive to interest rates and makes up a significant part of the U.S. economy. For nearly a decade, mortgage rates below 5% gave buyers the leeway to purchase more expensive homes. Rising rates weaken that purchasing power...

Economists and those in the real-estate industry have explanations for the unrelenting demand and minimal supply accelerating housing prices nationwide: millions of Americans in their 20s and 30s reaching peak home-buying years, more work-from-home jobs in the pandemic, increased competition from investors and too little housing built in the past decade.

Homeowners also have an incentive to stay put. Many don't see where they can afford to move. In April, the monthly mortgage payment on the typical home jumped to $1,475, assuming a 30-year fixed-rate mortgage with a 20% down payment, according to Zillow (Z). That is up 34% since December and 53% from April 2021...

... fewer than 10% of 1,500 prospective buyers surveyed this year said they would stop their home search because of rising mortgage rates. Shoppers in a 2018 survey, the last time mortgage rates rose to 5%, were twice as likely to say they would pull back.

"We wanted a house no matter what," said Kendal Strong, a 31-year-old hairstylist...

"If you think you're going to cut home-buying demand, just instantly, by raising rates, that works so much better when someone was looking in San Francisco and had to stay there," said Glenn Kelman, chief executive at Redfin. "But when mortgage rates go from 3% to 4% to 5%, people can just go from San Francisco to Ohio, to Arkansas, to Louisiana"...

Home builders have increased production but are hamstrung by volatile material costs, supply-chain troubles and shortages of skilled tradespeople and available land. "The Fed is determined to put out this fire," Douglas Bauer, chief executive at Nevada-based home builder Tri Pointe Homes Inc., told analysts last month. "But there is just no supply."

For the decade following the 2007-2009 recession, new-home construction in the U.S. slowed. The homeowner vacancy rate has since fallen to 0.8%, the lowest in 66 years of record-keeping. The rental vacancy rate is near its lowest level since 1984. At the end of April, 1.03 million homes were listed for sale nationally, equal to a 2.2-month supply at the current sales pace, compared with a historical average of 5.7 months for that time of year, according to NAR.

Here's another interesting chart someone tweeted: 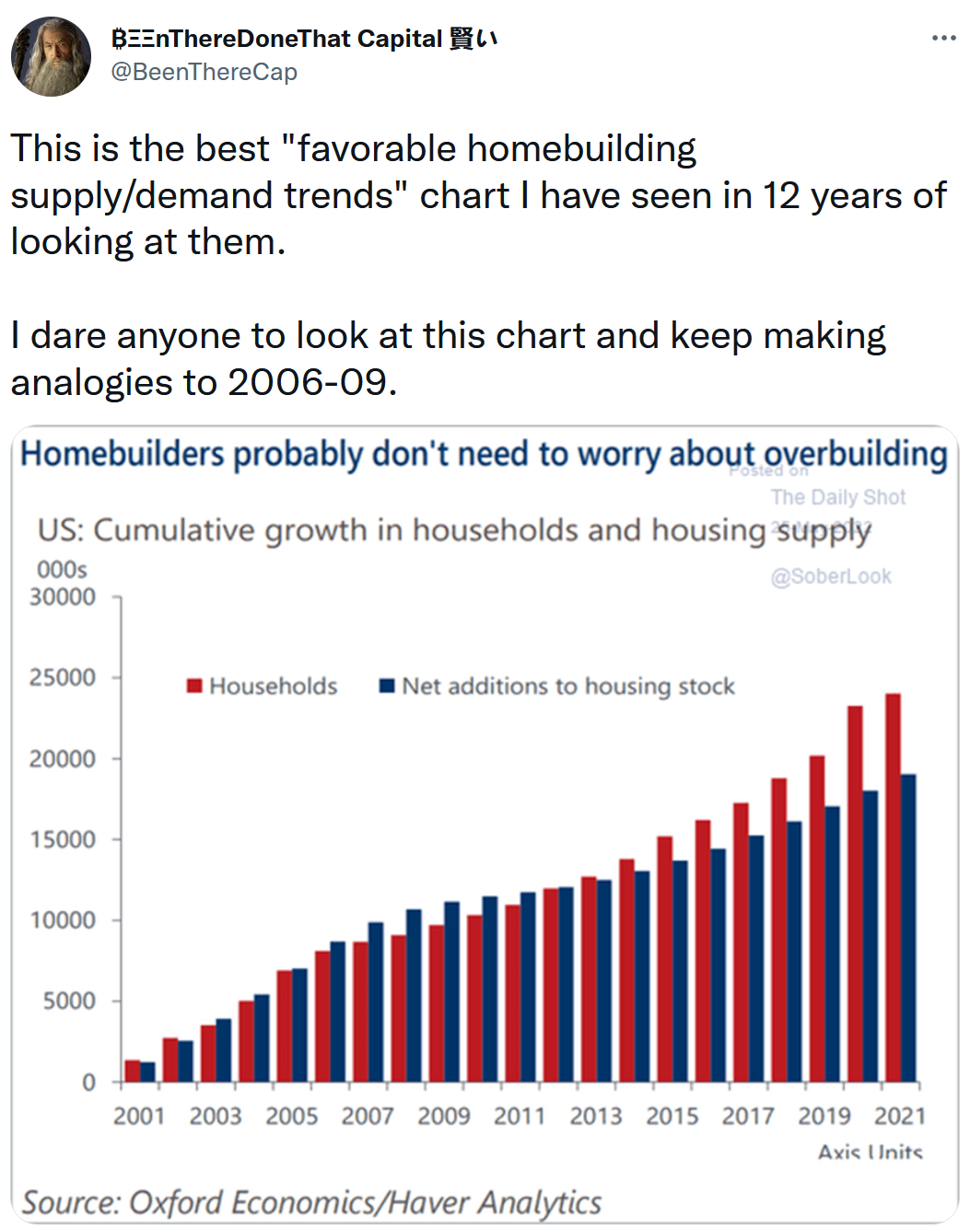 Lastly, if you want to take an in-depth dive into the housing market, I recommend this five-part series by Voss Capital, The Big Long? A Deep Dive on U.S. Housing:

In our view, the current housing market is a textbook example of supply and demand imbalances driving up prices. The demand that has resulted in bidding wars and rapid home price appreciation isn't coming from euphoric real estate speculation. The ongoing wave of demographic driven demand is crashing into a structural housing supply shortage after we spent over a decade underbuilding following the financial crisis. While we don't want to try to predict housing prices, we think the calls for a housing price crash on par with or even worse than 2007/2008 are sensationalistic as we believe there is a strong demand floor for the foreseeable future...

While we agree that affordability is something to keep an eye on and quickly becoming a concern in some markets, much of it stems from the supply/demand imbalance we entered 2020 with rather than rampant speculation or anything of the sort. The good news is that homebuilders are building where people want to live, where the demographics support it and where employment is growing. Despite persistent supply chain issues continuing to slow down the pace of completions there are currently more than 800,000 single family home under construction. This provides a line of sight to much needed new supply which should serve to help correct the supply/demand imbalance and ease the rapid home price increases in the most in demand cities.

4) I received some good feedback from yesterday's e-mail, in which I shared the story of my recent colonoscopy:

THANK YOU for writing about this life-saving topic!

My hard-working immigrant father died of colon cancer, just shy of age 60, in 1997.

He never got to meet his six grandchildren, who started being born in 1999.

That's why I tell all my friends, when they hit 50, to make sure to get their colonoscopy done. [Whitney note: The recommendation is now 45.]

Next one next year for age 55.

PS—My wife (copied here) turns 50 next month. You bet I'll be hounding her...

It was good of you to publish this info. It applies to all people.

Please do the same for checking for prostate cancer, which is still needlessly killing far too many men. Thank you.