In it, he shares a way that can help you steadily increase your wealth in the midst of this volatile market. As he says, it could be the best-kept secret of making money during a downturn – it's the same strategy he used to make money during every downturn of the past 25 years.

And yet, he believes 99% of investors don't even know about it. You can watch the whole presentation – no e-mail address or credit card required – right here.

It's very complex, so I asked Glenn Tongue, my friend and former partner at my hedge fund (he was the other "T" in T2 Partners), to analyze it for my readers. Here's what he has to say:

Pershing Square raised $4 billion two years ago in a SPAC, Pershing Square Tontine Holdings (PSTH). It was not only the largest SPAC ever, but also the most shareholder friendly in my opinion.

A year ago, PSTH announced a plan to buy 10% of Universal Music Group as part of its spin-off from Vivendi, but the SEC eventually shot down the deal.

Since then, SPACs have fallen deeply out of favor, which has no doubt contributed to Ackman's difficulty in finding and negotiating another deal. At this point, with a deadline of July 24, it seems unlikely that PSTH will consummate a deal.

The path for SPACs in this position is simple: liquidate and return the cash in trust to PSTH shareholders – in this case, $20 per share, which is why the stock is at $19.92.

Warrant holders typically get nothing, which is why the PSTH warrants (PSTH-WT) closed Friday at $0.48.

Based on Thursday's filing, however, Ackman is trying hard to do more for PSTH shareholders and warrant holders. Much more. Here's how...

In its registration statement, Pershing Square SPARC Holdings notified the SEC that it intends to effect a "business combination" – just like a SPAC would – but it's not a SPAC because it's not raising any money. Instead, investors – starting with Pershing Square itself – will only put up money once the target has been identified and a deal has been struck.

That's a great deal for investors – far better than a typical SPAC, which requires them to tie up their capital for as long as two years.

But an even better deal would be to have the right (but not the obligation) to invest in the deal after all the details are known, but at the price before the deal was announced.

Well, that's exactly what Ackman is offering to PSTH shareholders and warrant holders...

SPARs could be quite valuable. Pershing Square, an outstanding investor, will be investing its capital in whatever merger combination it announces, committed in advance in a forward purchase agreement.

A SPAR will give the holder the right to invest in the deal at a fixed price ($10 per SPAR held, for example). If the market likes the deal and the SPARC shares trade above $10, that increase will accrue to SPAR holders.

In summary, rather than just giving PSTH shareholders $20 and warrant holders nothing, which is what any other SPAC would do, Ackman is giving those who invested with him a free call option, which could be quite valuable, on his next deal.

This is a real credit to Ackman. I am not aware of any other SPAC sponsor who, upon failing to effect a business combination, has done anything beyond the minimum required for investors.

Thank you for sharing your analysis, Glenn!

3) On Friday, the New York Times ran this article underscoring the risk embedded in the largest crypto "stablecoin," Tether: The Coin That Could Wreck Crypto. Excerpt:

Cryptocurrency prices are plummeting. A so-called stablecoin lost all its value in a matter of days. A newfangled crypto bank halted withdrawals. And investors have been plunged into financial ruin.

Now the crypto industry is grappling with an even grimmer prospect: The worst may be yet to come.

Concern is mounting over another potential vulnerability in the crypto market: Tether, a company whose namesake currency is a linchpin of crypto trading worldwide. Long one of the most scrutinized companies in the industry, Tether is facing heightened pressure from regulators, investors, economists and growing legions of skeptics, who argue it could be another domino to fall in an even bigger crash.

The longer the turmoil in the crypto world continues (and the more articles like this), the greater the likelihood that Tether collapses, as I've discussed in numerous e-mails over the past month.

I think the odds of this happening in the next few months have risen to 50/50.

If so, look out below across the entire sector... As the article above notes:

"Tether is really the lifeblood of the crypto ecosystem," said Hilary Allen, a finance expert at American University. "If it imploded, then the entire facade falls down."

Tether isn't as big of a scam as Terra was – at least Tether has some assets backing it – but it's still an obvious, total scam.

In Tether's laughably misnamed "Transparency" report, the dollar value of Tethers is down to $67.5 billion:

I'll take the under on this – I'll bet this number is out of date, as Tether doesn't want to reveal the degree to which I suspect crypto speculators are fleeing the coin.

I'll also take the under on Tether's claimed reserves breakdown:

Note how Tether tries to build confidence by taking the percentages out to two decimal places, but I suspect all of these numbers are as phony as a $3 bill...

In summary, the risk of a meltdown across the entire sector is growing by the day, so continue to avoid all cryptocurrencies.

Here are some additional articles I've read recently about the crypto meltdown:

• The Clues You Missed: 5 Super-Obvious Signs We Were in a Financial Bubble

• A Crypto Bankruptcy Could Be Investors' Nightmare

• Crypto Has a Crazy Week, With Bitcoin Dropping and Celsius Freezing

• The Crypto Party Is Over

4) Related to crypto, I've warned my readers about Robinhood (HOOD) – both the app, which encourages reckless speculation in cryptos, options, etc., as well as the stock, which relies on incinerating its customers – more than a dozen times over the past two years (see archive here).

So I'm delighted to see that the stock has collapsed more than 90% since its post-IPO peak last August, as this Wall Street Journal article highlights: The Unraveling of Robinhood's Fairy Tale. Excerpt:

In the span of less than a year, Robinhood has seen many of its successes fade. Its monthly active user count dropped 25% in the first quarter from last year's quarterly peak, while revenue fell even faster, down 47%. Its stock this week fell to a record low and is trading 81% below its July IPO price. The company has shifted its focus from rapid growth to cost-cutting, laying off 9% of its staff earlier this year.

Robinhood has also found itself on a collision course with regulators after Securities and Exchange Commission Chairman Gary Gensler last week outlined a revamp of trading rules that could threaten part of its business model.

"You had a perfect storm that fueled the rise and attention around Robinhood," said Paul Rowady, director of research for Alphacution Research Conservatory, a market research and advisory firm. Now, he said, "You've had the opposite occur over the past year."

The article has this picture of Robinhood co-founders Baiju Bhatt and Vladimir Tenev on the day of the company's IPO: 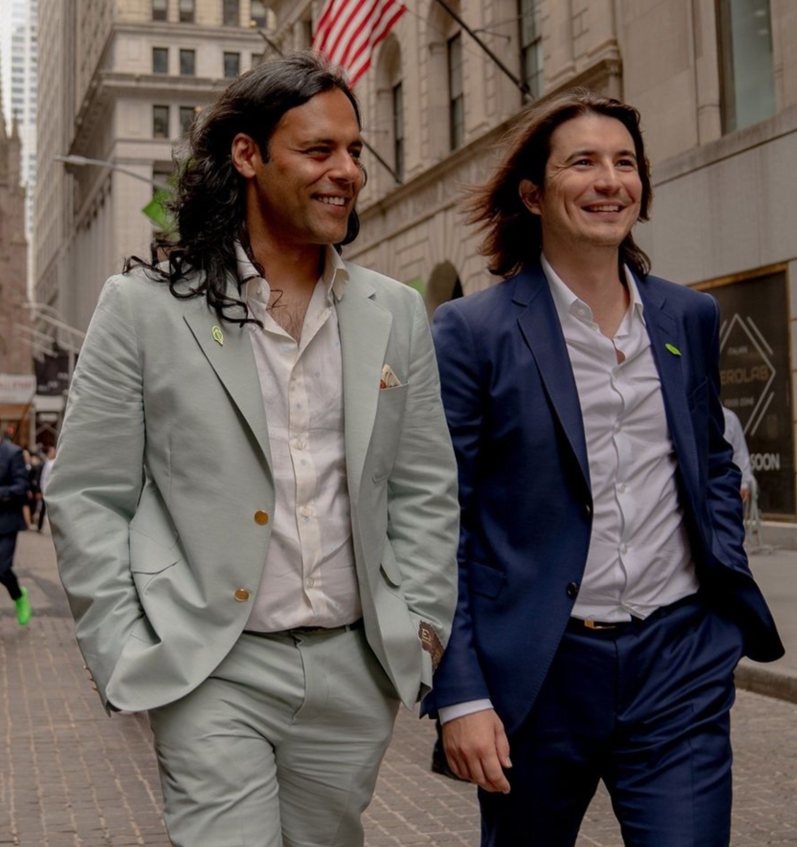 Have you ever seen more obvious sleazeballs?

Actually, I have – but only by a whisker! This is what I wrote in Thursday's e-mail about the CEO of Ebix (EBIX):

Experienced short sellers look for "tells" that indicate likely fraud. This is one of the best I've ever seen:

If that guy isn't a crook, then I'm a monkey's uncle!

5) I hope every father out there had a great Father's Day on Sunday!

I am the luckiest guy on earth to have two of the greatest parents anyone could ask for. Here are some pictures of me over the years with my dad, who, at age 80, is still (with my 81-year-old mom) mountain biking, horseback riding, playing tennis, hiking, and flying his plane around Kenya: 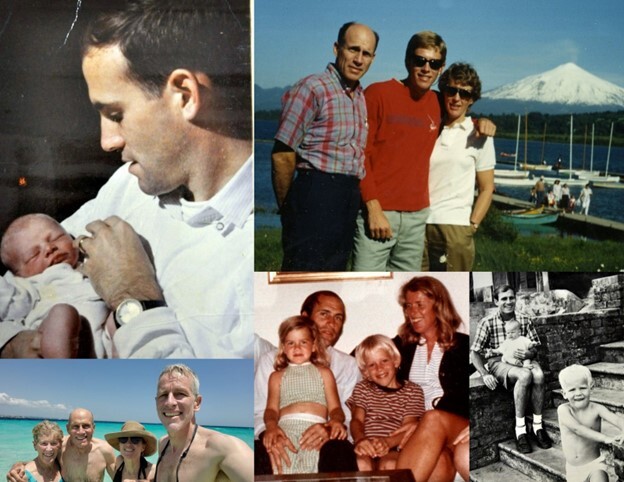