In his brand-new monthly newsletter, he’s targeting only stocks that he believes have 500% to 1,000% (or more) upside.

As I’ve mentioned many times before, Enrique is one of the most unique people – and thinkers – I’ve ever known. As you can see in this fantastic documentary, which includes a special offer for Empire Elite Growth, he had to struggle merely to survive his childhood, but then went on to Wharton, Wall Street, and the hedge-fund world. He raised billions for two hedge funds he co-founded, one of which he grew by 130,000% in four years.

Enrique is neither a value nor growth investor… He’s a stone-cold money maker. He made money during the tech meltdown, 9/11, the global financial crisis, and so far in the current crisis.

To understand how he’s done this, read his essay below entitled “We’re Buying Stocks, Not Companies.” In it, he says things that are heretical to traditional value investors (as I used to be), such as…

The value of the stock is simply a matter of opinion. Ultimately, it’s only worth whatever the next buyer is willing to pay for it.

This is one of the biggest disconnects – and frustrations – that “smart” investors have with stocks. They determine a value for the underlying company and its cash flows, and then they expect the stock price to (eventually) match up with that analysis.

However, this is seldom the case. Instead, the analogy I often share with my analysts is to think of stocks as pieces of art.

To be a successful investor, you need a broad tool kit – which is what Enrique has developed over more than two decades on Wall Street.

To be clear, Enrique and I both believe that a company’s fundamentals matter – and are the ultimate driver of a stock… But only in the long run. In the short run, stocks can – and often do – trade anywhere, based on many non-fundamental factors.

For example, consider the biggest winner Empire Financial Research has had over the past year: space travel pioneer Virgin Galactic (SPCE)…

Enrique correctly identified that, while the company does have a good fundamental story, what was really important in the short run after it went public last October is that it’s the only public traded company in a “sexy” sector… it has master showman Sir Richard Branson behind it… and, oh yeah, it has a cute ticker.

Sure enough, look at what the stock has done since it started trading… 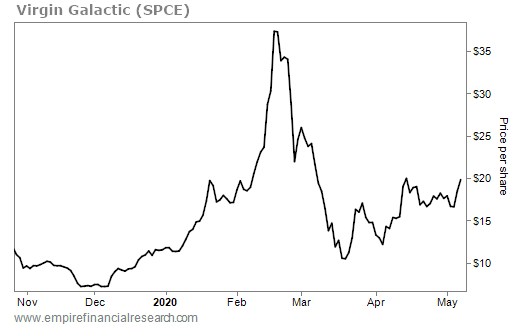 Now you see why he was at the top of my list to bring on board as soon as possible after I launched Empire Financial Research!

Again, click here to watch the documentary about his amazing life story and, if you wish, sign up for Empire Elite Growth.

Below is Enrique’s essay.

If you’ve been investing for long, you might have heard comments like, “Fundamentals don’t matter in this market, just buy the 10 stocks that work.”

It’s a popular refrain when folks are confused by the market action. When something happens that they don’t understand, they throw their hands up in the air.

But these comments miss an important, long-term fact about stocks…

The vast majority of the time – not just in a specific type of market – fundamentals really don’t matter for stock prices.

Now, this flies in the face of everything that investors are taught… but it’s the reality.

It’s important to understand the difference between a company and a stock. Let me show you what I mean…

In the real world, an investor would buy a company. For instance, you might buy a gas station. Now that you own the gas station, you have access to the cash flow that the business generates, and you can do whatever you want with it.

Stocks, on the other hand, represent public equity ownership in a company… But when it comes down to it, they’re just pieces of paper. When you buy a stock, you don’t contractually have access to that business’s cash flow.

I used to tell my analysts that the value of a company and a stock only converges in two scenarios: If Company A buys Company B, then Company B is worth what Company A was willing to pay for it… If Company B goes bankrupt, it’s worth nothing.

The rest of the time, the value of the stock is simply a matter of opinion. Ultimately, it’s only worth whatever the next buyer is willing to pay for it.

This is one of the biggest disconnects – and frustrations – that “smart” investors have with stocks. They determine a value for the underlying company and its cash flows, and then they expect the stock price to (eventually) match up with that analysis.

However, this is seldom the case. Instead, the analogy I often share with my analysts is to think of stocks as pieces of art.

Fundamentally, works of art don’t really have any economic value… yet buyers may pay exorbitant amounts of money for them. They can also go up and down in price quite a bit.

So what drives these price movements?

The answer is simply supply and demand. If more people want to buy than sell, then the price of the asset has to move up until the sellers are willing to sell it.

Now, investors’ opinions about many “fundamentals” can determine this demand. The scarcity and “quality” of the artwork is one deciding factor. Potential future demand is another.

Note that all of these factors are impossible to prove.

The same can be said about many factors that investors use to judge the value of stocks. Investors may have opinions about a company’s future revenue growth, cash flows, or merger-and-acquisition potential. But the facts can be difficult to prove.

And in many ways… they don’t matter. The stockholders won’t see any of these cash flows anyway.

You don’t need to spend hours poring over earnings reports. Expectations are what really push stocks higher. When more buyers than sellers have an increasingly positive view of the fundamentals, they are willing to pay more. But their actions are based on opinions, not facts.

Does this mean that no relationship exists between fundamentals and stock prices?

Not at all… For the most part, market opinions closely align with fundamentals. But this is because investors choose for this to be the case. It’s not forced by any specific equation.

This is perhaps the most important concept in stock investing. It’s also the most frustrating one for many investors to understand.

The accepted view is that valuation and fundamentals drive share prices. But they really only drive opinions about the underlying companies. This means that you can see stocks “de-couple” from these factors tremendously.

The most important thing a stock investor can do is understand the difference between stocks and companies.

From there, make sure you get a firm grasp of the factors that drive the opinions of buyers and sellers. These may very well be fundamentals such as valuation and cash flow… but sometimes, they could be completely unrelated.

Keep this in mind when you’re buying stocks in the future. I guarantee it’ll help you pinpoint opportunities most investors don’t see… and save you from potentially losing a lot of money!