Yields on longer-term U.S. Treasurys have fallen further below those on short-term bonds than at any time in decades, a sign that investors think the Federal Reserve is close to winning its inflation battle regardless of the cost to economic activity.

A scenario in which short-term yields exceed long-term yields is known on Wall Street as an inverted yield curve and is often seen as a red flag that a recession is looming.

For insight on what this means, I'm sharing the below excerpt from Wednesday's issue of my colleague Enrique Abeyta's excellent Empire Elite Trader service (to learn more about Empire Elite Trader – and to find out how to gain access to his weekly trades, where he has booked an 87% win rate – click here)...

Is a 'Yield Curve Inversion' Bad for the Stock Market?

If you have been following the financial media in recent weeks, you have probably heard the term "yield curve inversion" used many times. You may have also heard that this is a major concern for the economy and stock market.

So, what is a yield curve inversion?

Let's look at each word in the phrase...

That means if you buy this bond, the federal government will make you a payment every six months equal to one-half the interest rate times the principal amount. Then at the end of the 10-year period, you will get your principal back. Pretty simple. 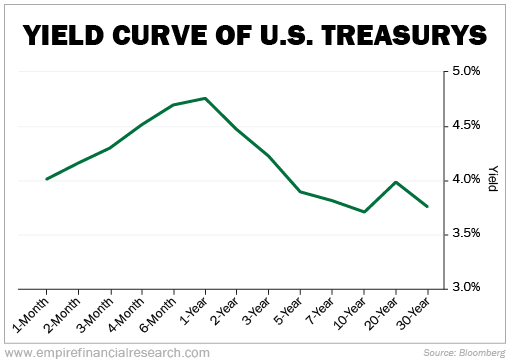 Normally, investors would expect to get paid a higher interest rate for debt that pays out further in the future. The time to pay out debt is called the "duration."

Longer duration bonds should pay out higher for a few reasons...

First – and especially with companies – there's a higher possibility of "credit risk," or that the company could go bankrupt.

Second, with inflation driving down the value of the dollar (the underlying currency of U.S. government debt), the purchasing power of your investment goes down by the rate of inflation. The longer the bond duration, the more years for inflation to devalue your investment and the higher interest rate you will expect.

Right now, investors are being paid more in interest by the U.S. government for bonds with a shorter duration versus a longer duration. This phenomenon is referred to as "inversion," thus completing our phrase.

It's also quite rare. Take a look at this long-term chart of the spread between two-year and 10-year U.S. government debt... 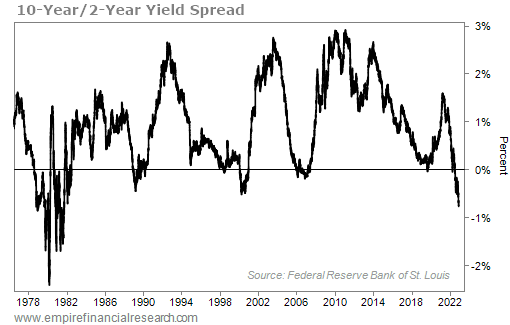 As you can see, the yield curve was highly "inverted" back in the late 1970s and early 1980s, and it has seldom been inverted at all since then – certainly not to the degree that it is right now. In fact, the last time it was this inverted was more than 40-plus years ago, back in 1981.

The current yield curve is a rare occurrence... This explains why all the "talking heads" are going on about it!

So, why is this very rare occurrence happening?

Economists have written countless pages of analysis on it, but we'll try to make it easier to understand.

The yield curve serves as a graphic representation of the market's view on economic growth and inflation.

When inflation is too high and/or economic growth is so high that it can lead to inflation (both were true in the first half of 2022), then the U.S. Federal Reserve raises its benchmark interest rate: the federal funds rate. This is the rate at which banks are allowed to lend to each other in the shortest duration, which happens to be overnight.

In order to slow economic growth (and thereby slow inflation), the Fed raises this rate which is reflective of the "cost" of money. When money costs more, it's more expensive to borrow and lend and it acts to slow down economic growth, which should lead to lower inflation.

The Fed has been very active raising this rate in 2022, as you can see in this chart... 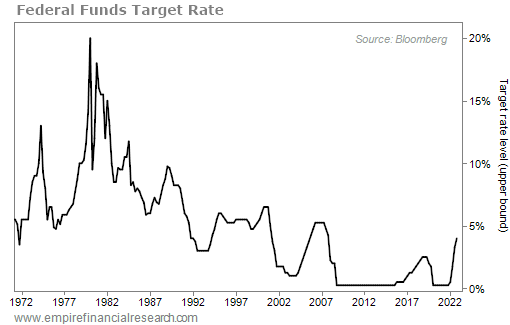 As you may be aware, the Fed raised this rate from 0.25% back in March to 4% today. And officials are talking about raising it even more...

When the "short end" of the yield curve is higher than the "long end," it's usually indicative of two things...

First, current inflation (and economic) growth is too high for the Fed's comfort, and the central bank will be acting to impact it by raising rates even higher.

Second, the Fed will likely mess it up!

Future rates are lower than the current bond market, which tells us that while the Fed is raising rates now to slow growth, it will be lowering rates in the future.

That means the bond market (and this yield curve inversion) is telling us that we are likely to enter into a period of much slower economic growth. In the case of a full yield curve inversion like the one we're currently experiencing, it has almost always meant an economic decline or recession.

The same is true of the overall stock market. If earnings for the S&P 500 Index are down, then the index also goes down. If the economy declines, then it's also tougher for companies to grow their top line and earnings and, therefore, for it's tougher for earnings to grow.

As a result of all of this, it would seem clear that a yield curve inversion is bad for the stock market... and we agree with this idea.

The question right now, however, is whether it is currently bad for the stock market... or if it was bad.

What do we mean by that?

Economic growth has also slowed down on all measures. "Real" economic growth (after taking inflation into account) is strongly negative.

What if the stock market has already "priced in" the economic slowdown implied by the yield curve?

Certainly, expectations for interest rates, the economy, and even the stock market are much lower than they were before. Multiple sentiment indicators are near historic lows.

No one can know for sure if this is all "priced in," but we can be confident that there's a much better balance between economic reality and sentiment at this point. This history of buying stocks when they're down by this much indicates strong intermediate returns...

So in the meantime, this market is still great for trading, and that remains true whether the yield curve is inverted or not!

Thank you, Enrique! Again, you can learn more about Empire Elite Trader – including how to gain access to Enrique's latest trading opportunity – right here.

2) Anyone who has exposure to the crypto market should read this article in today's Wall Street Journal very carefully: Rising Tether Loans Add Risk to Stablecoin, Crypto World. Excerpt:

The company behind the tether stablecoin has increasingly been lending its own coins to customers rather than selling them for hard currency upfront. The shift adds to risks that the company may not have enough liquid assets to pay redemptions in a crisis.

Tether Holdings Ltd. says it lends only to eligible customers and requires that borrowers post lots of "extremely liquid" collateral, which could be sold for dollars if borrowers default.

These loans have appeared for several quarters in the financial reports that Tether shows on its website. In the most recent report, they reached $6.1 billion as of Sept. 30, or 9% of the company's total assets. They were $4.1 billion, or 5% of total assets, at the end of 2021.

Tether calls them "secured loans" and discloses little about the borrowers or the collateral accepted. Alex Welch, a Tether spokeswoman, confirmed that all of the secured loans listed in the reports were issued and denominated in tether. The company said the loans were short-term and that Tether holds the collateral.

Tether, which is incorporated in the British Virgin Islands, doesn't publish audited financial statements or a complete balance sheet, leaving outsiders with an incomplete picture of the company's financial health. "Tether's disclosures are limited to the information contained in the mentioned reports," Ms. Welch said.

The rise in Tether's lending represents a broad risk to the crypto world. Stablecoins such as tether are anchors in the system. They are vital for trading many cryptocurrencies and are widely held by traders. The premise of tether – and other stablecoins – is that the issuer always will redeem one coin for $1. Issuers take pains to demonstrate they have ample funds available to do so.

"I've been very skeptical and in disbelief that they can get away with the lack of disclosure and with the limited transparency," said Peter Crane, president of Crane Data, which tracks money-market funds. "If you do have reserves, why wouldn't you show them?"...

"If tether falls, and they have loans that can be repaid in tether, then by definition it's not backed up by a dollar," said William VanDenburgh, an accounting professor at College of Charleston in South Carolina, who has written about Tether and followed it closely...

"They should be giving the fair value on all the underlying assets," Mr. VanDenburgh said. "We don't know if they can pay off dollar-for-dollar based on all their claims against them if they had a major run on the funds."

I don't think this article by itself provides a smoking gun, but it's yet another warning flag that gives me even more conviction that Tether is significantly under-reserved and the chances have increased of Tether "breaking the buck," which would roil the entire crypto world.

3) I love stories like this: A Helicopter Crashed on a Tractor. Its Operator Saved the Pilot. Excerpt:

Mr. Schneider said he was wearing noise-canceling headphones that day, but he suddenly heard what sounded like two thumps.

"I looked up and that's when I saw it," he recalled. "As soon as I saw it coming down on me I was like, 'Oh no, this is definitely gonna hit me.'"

Mr. Schneider said he immediately felt a sharp pain in his back. He was able to free himself, he said, by pushing off the steering wheel of the tractor, and slipping out.

"That's when I heard the pilot screaming for help," he said.

The pilot, Mr. Schneider said, was upside down, unable to unbuckle his seatbelt, surrounded by fire that had started to engulf the helicopter.

"I had to go in through the fire, reach my arms through and unclip him," Mr. Schneider said.