Enrique believes that special purpose acquisition companies (“SPACs”) present one of the biggest money-making opportunities that he has seen in his entire investing career. You can learn more about how these booming assets work – and why Enrique is so bullish – by clicking here.

2) Third-quarter earnings season begins this week, and all eyes will be on the banks.

The U.S. Federal Reserve has expressed worry about the health of the financial system without fresh stimulus, so expect bank CEOs to get a lot of questions about this.

While the near-term outlook for banks is cloudy, I think this is more than reflected in their stock prices… We’ve recommended a number of them in Empire Financial Research newsletters, plus I own a basket of other ones in my personal account (to prevent conflicts of interest, I can’t own anything we recommend to our subscribers).

My friend Doug Kass of Seabreeze Partners shares my bullishness and makes a compelling case in an article he published yesterday:

Everyone loves Raymond, but nearly everyone hates bank stocks. As an example, this morning, Jim “El Capitan” Cramer came down hard on the banking group and questioned whether the space can ever perform well.

I respectfully disagree with all the naysayers as, to me, the intermediate term outlook for bank stocks remains solid and this week’s EPS announcements may even encourage investors over the near term:

* A strong $2.2 trillion Democratic stimulus bill in February is positive for banks and the extension of bank credit, especially as it is likely that U.S. corporate profits will be reduced by higher tax rates in 2021. A grander stimulus package will likely shape the yield curve and cause interest rates to rise. This is not priced in and could be a surprise factor to the upside.

* One of the largest asset class mispricings, which has held back financial stocks, are the current level of interest rates. With inflation breakevens rising and with unbridled fiscal spending, and given other factors, interest rates may have nowhere to go but higher.

* Given the likelihood that there will be a “Blue Wave,” corporate tax rates will move higher. This means that companies will need more, not less, access to bank credit in 2021.

* Higher corporate tax rates (from 21% to 28%) will only modestly reduce bank earnings – by about -7% – about the same reduction in industrial earnings.

* But the marked reduction in loan loss provisioning in 2021-22 will lead to a material outperformance of bank earnings per share relative to the rest of the S&P Index and market.

* While many are concerned about more regulation from a Democratic administration, it is clear to me that a Biden White House will first have its eyes first on controlling technology through regulation and antitrust. As a consequence I feel it is unlikely that banks will not be subject to a major legislative effort over the next few years. They are already heavily regulated!

* From a near term standpoint, third quarter will likely indicate a topping in loan loss provisions, a continued improvement in fee based income lines (e.g., mortgages) and strong capital market activity’s contribution to overall revenues and profits.

* While there is still net interest margin pressure, 3Q results will indicate, and bring on commentary, regarding a bottoming in non-fee margins and income.

* Industry balance sheets remain remarkably strong despite COVID’s impact on business and personal credit. Most banks will survive an unprecedented rise in loan loss provisioning – with a large income statement hit but without any significant balance sheet damage. Despite the P&L hit, most large money center banks will increase their book value year over year (2020/2019).

Despite the near universal hatred towards the group, the relative earnings momentum of banks (against the non-financial components of the S&P Index) will begin improving materially in the quarters ahead. That positive momentum and change in the rate of growth will accelerate as 2021 progresses.

Not content with my already large financial holdings, I have recently added to my four money center bank positions, and established new positions in GS (at $190, now +$5/share on the day and trading over $213 this morning).

Finally, let’s remember that in a market dominated by products and strategies that chase price and momentum, “buyers live higher” – should bank stocks make a move higher from here, the machines and algos will be following and buying bank stocks.

And the same cabal that is bearish on banks will then turn positive on banks.

3) My flight yesterday from JFK to Las Vegas was the first one I’ve taken since I went to San Francisco in mid-June and came back in early July.

What I observed was about what I expected. There weren’t very many people in the international or JetBlue terminals… but some of the shops were open, the JetBlue departure board showed 42 flights, and the plane was nearly half full – all noticeable improvements from my last trip. Here are some pictures: 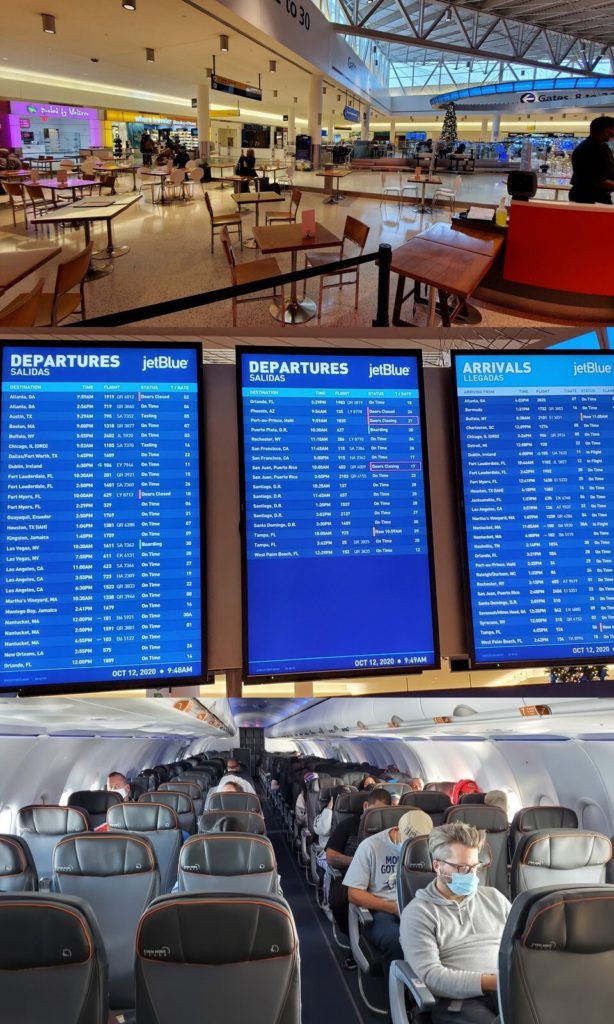 Meanwhile, as you can see in the pictures below, the Vegas airport was busy – reflecting the rebound in leisure travelers. Unfortunately for the airlines, I saw almost no business travelers, who are the most lucrative ones… 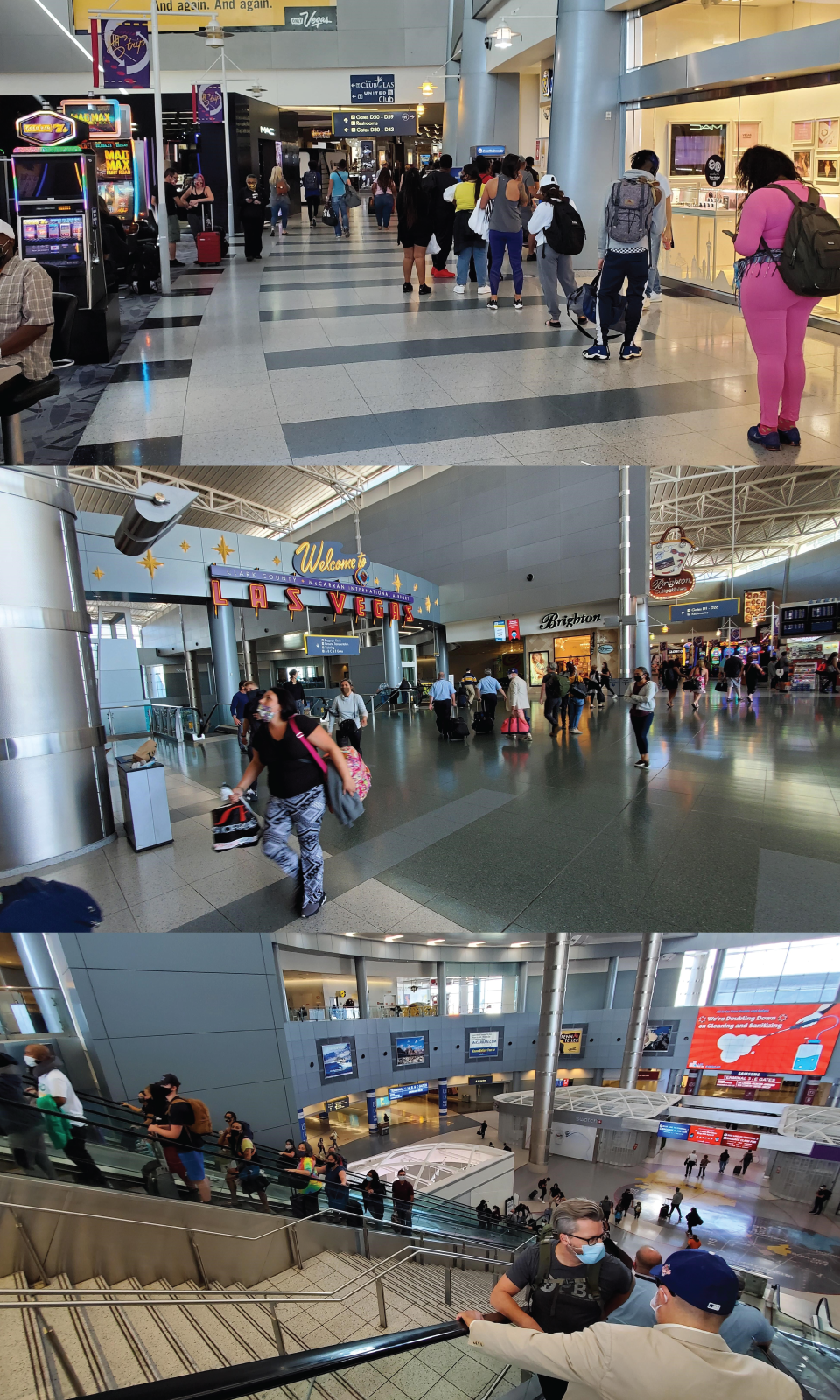 This chart shows that the number of travelers at U.S. airports is slowly rising, but remains more than 60% below last year’s level: 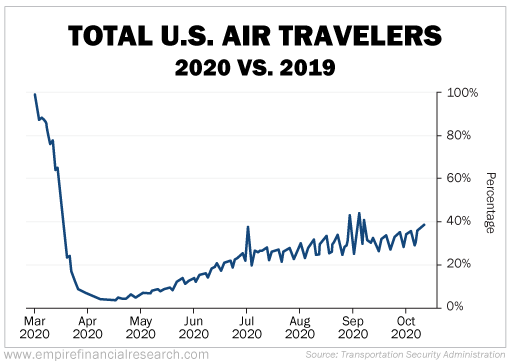 4) Before boarding yesterday, I made two stops: first, at the enrollment center for Global Entry to renew my membership for another five years. I travel overseas a lot (at least I used to!), so I was one of the first people to sign up for this program when it launched. It allows me to skip what are often long lines through customs when I return to the U.S.

If you travel outside of the U.S. at all, it’s a no-brainer to get… The program only costs $100 for five years – and when you get it, you also get TSA Precheck, which expedites your security screenings at domestic airports (TSA Precheck costs $85 for five years, so Global Entry is only an extra $15). Even better, many high-end credit cards like Platinum AmEx and Chase Sapphire Reserve cover the $100 fee.

I had some extra time before my flight, so I walked a few minutes from JetBlue’s Terminal 5 to check out the new TWA Hotel – a wonderfully retro architectural gem that opened last year. Maybe my wife and I will sneak out there for a night – rooms are currently only $109! Here are three pictures I took: 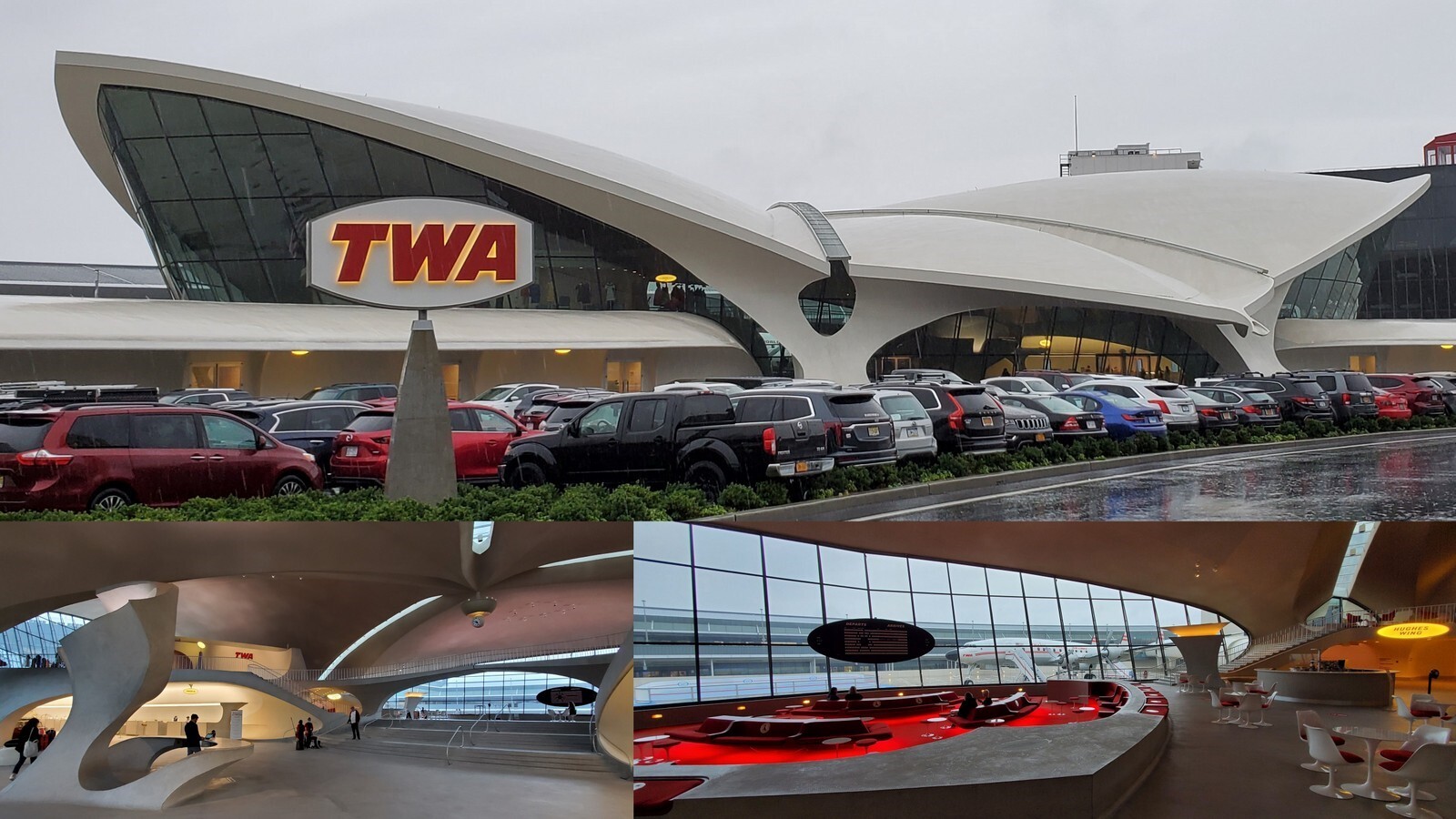 Here’s a New York Times article about it: Martinis at the Bar. Sinatra on Repeat. The TWA Hotel Sells a Jet-Age Fantasy. Excerpt:

Within the first couple of weeks there were half a dozen marriage proposals. Guys dropping to their knees in the Sunken Lounge and on the cantilevered catwalk – popping the question on the Solari split-flap departure board or in “Connie,” the 1958 TWA Lockheed Constellation Starliner parked outside on the roof of a new underground conference center, the plane’s fuselage converted into a 60’s-era cocktail lounge.